Don't let the title mislead you, it is my first tank but I have been running it now for just over a year

I have considered putting up images of my tank for a long time now but never thought of it being good enough as I see so many awesome tanks on here, but I figured I could show you where I was when I started and the stage it is at now and what will happen in the future.

This image is of my tank when it was reasonably new and I got my first ever plants.mixed in with my fake plants 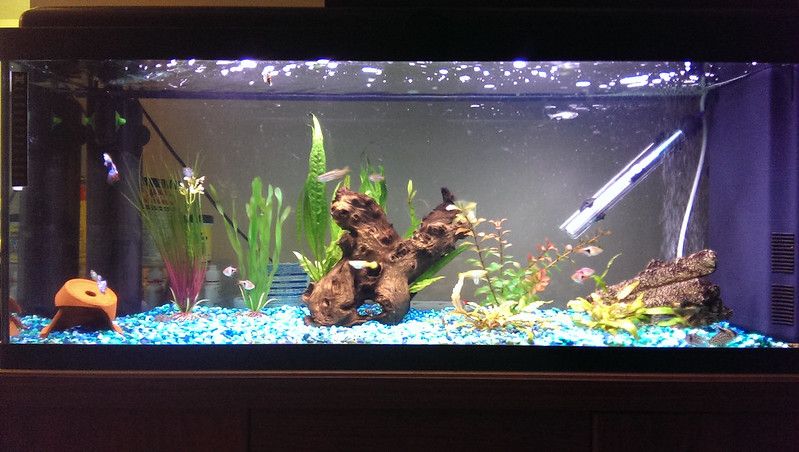 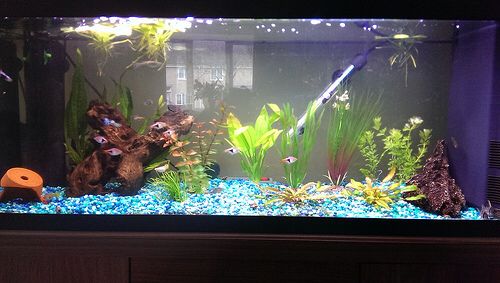 I then added some black paper on the back to give it a better contrasting affect against the fish and plants and added two Pearl Gourami's. I don't have any pictures of this at the moment but sure they are about somewhere.

The next big event was when I moved house which was a stressful task to say the least but was glad once I got it all in! 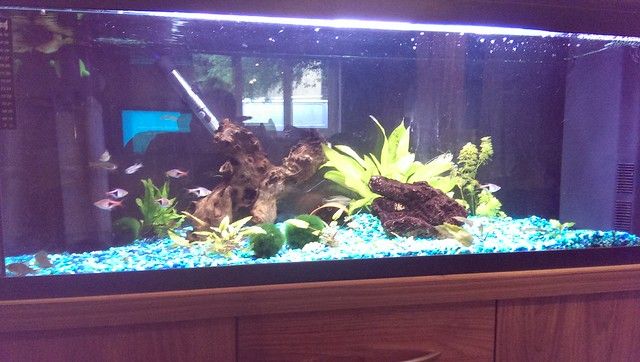 Not happy with the setup I decided to re-do it and spread everything out a bit more, I also believe that at this point my Gourami's were in my smaller tank upstairs where I was attempting to breed them 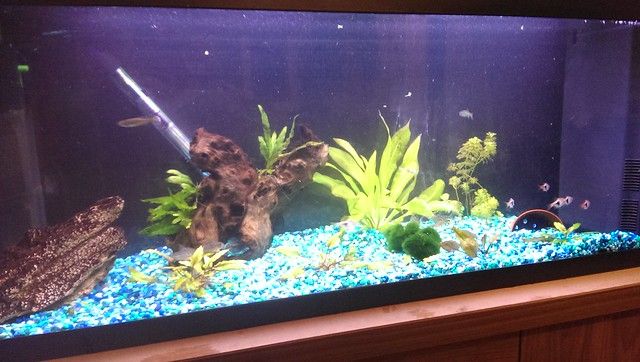 Since the last photo I have had the following new fish into my tank:
My losses were:
Last week I removed the horrible black filter box from my tank, added some decorations that I inherited but not sure if I am a big fan of them moved things around again and swapped my filter for a Fluval U4 and on Sunday I purchased a new male Gourami, Krib pair (hopefully!) and 6 Neon Tetra's for my little boy's tank which is also full of baby guppies! I also bought a big bag of water lettuce for £2 bargain!

Here it is as it currently stands, 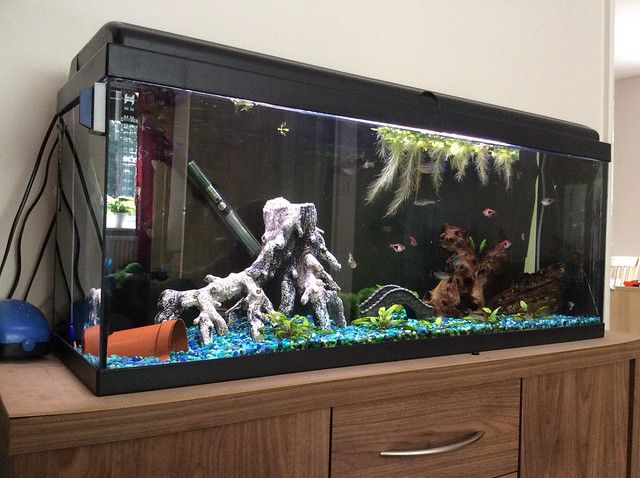 I am now running two DIY Yeast reactors on it as of tonight, I desperately need to upgrade the lighting because as you can see my plants have died off massively under the massively under powered lighting, I had a good look at it last night and it's an Aqualantis 25W light, I need at least 60W!

Hi, lovely tank, really like your floating plants, i can never get any of mine to grow with out dying haha

My apologies but dont those danios and the rasbora need more fish for a proper school?
OP

I had more danios but I lost a few as they like to commit suicide and the rasbora was taken on last minute as someone needed it gone.

I would add to the schools but I would need a bigger tank, alternatively I am looking at re homing the tetra as they were taken on at the same time and I'm not a fan but wanted to ensure they would be fine

Alright thats good, just checking its all in order

Haha I should note this is the second time I have bought floating plants as the first batch slowly melted away until I had none. Hopefully they will do better this time! I also put a few in my little boys tank which has no light in it or CO2 so I'm not expecting any miracles lol

I love your tank!

benthyer said:
I would add to the schools but I would need a bigger tank
Click to expand...

You could try reducing the number of different types of fish you have and have a couple of larger shoals of the same type. That would look good if you got it right.

Looks good. Think the substrate change will do you wonders.
OP

Lunar Jetman said:
You could try reducing the number of different types of fish you have and have a couple of larger shoals of the same type. That would look good if you got it right.
Click to expand...


508 said:
Looks good. Think the substrate change will do you wonders.
Click to expand...

Thanks 508, yeah I hope it does, I have never been truly happy with the gravel and it I dislike it more and more as time goes on!


AshleyNZ said:
I love your tank!
Click to expand...

Here's a picture of my Krib pair, I'm hoping that sometime in the future I will have lots of baby kribs as they seem to be getting along with each other really well and the male has started to colour up even more now. The only issue I have is that he can be quite aggressive with the other fish but I think he's just being protective, he doesn't bother the Corydoras just every mid/top fish 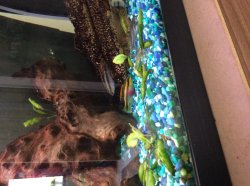