I started out with a 10 gallon tanks as a child and have upgraded to many tanks in all sizes. Recently I moved from a house with a big basement (old fish room) that was equipped with a central air system for the majority of my tanks. Sold about 40 tanks from 10 to 75 and moved to a new house with basement 1/4 of the size of the other house. Slimmed down and incorporated tanks so I can keep my favorites. Have the majority of my small tanks set up in the new house. Still have to set up the two 120g and a 125g. Also have a 180 that was damaged by the movers, they cracked the top/bottom trim in multiple places. Also scratched the trim on my other large tanks as well. Waiting on the claim to be resolved with the moving company to see what I am going to do about the 180, can't trash it until the claim is resolved. Also I share this passion with my sister, she is younger than me and my love of all things fishy rubbed off on her.

Here are some photos of the smaller tanks, sorry for the mess, the whole house is currently a work in progress. Also sorry about the algae/water spots on the glass.

Sister's cichlid tank, also has 2 river gobies, but all fish are MIA.

22 gallon blackwater tanks with some eye spot gourami, jara herdoni, and scarlet badis. Fish seem to be MIA as well. 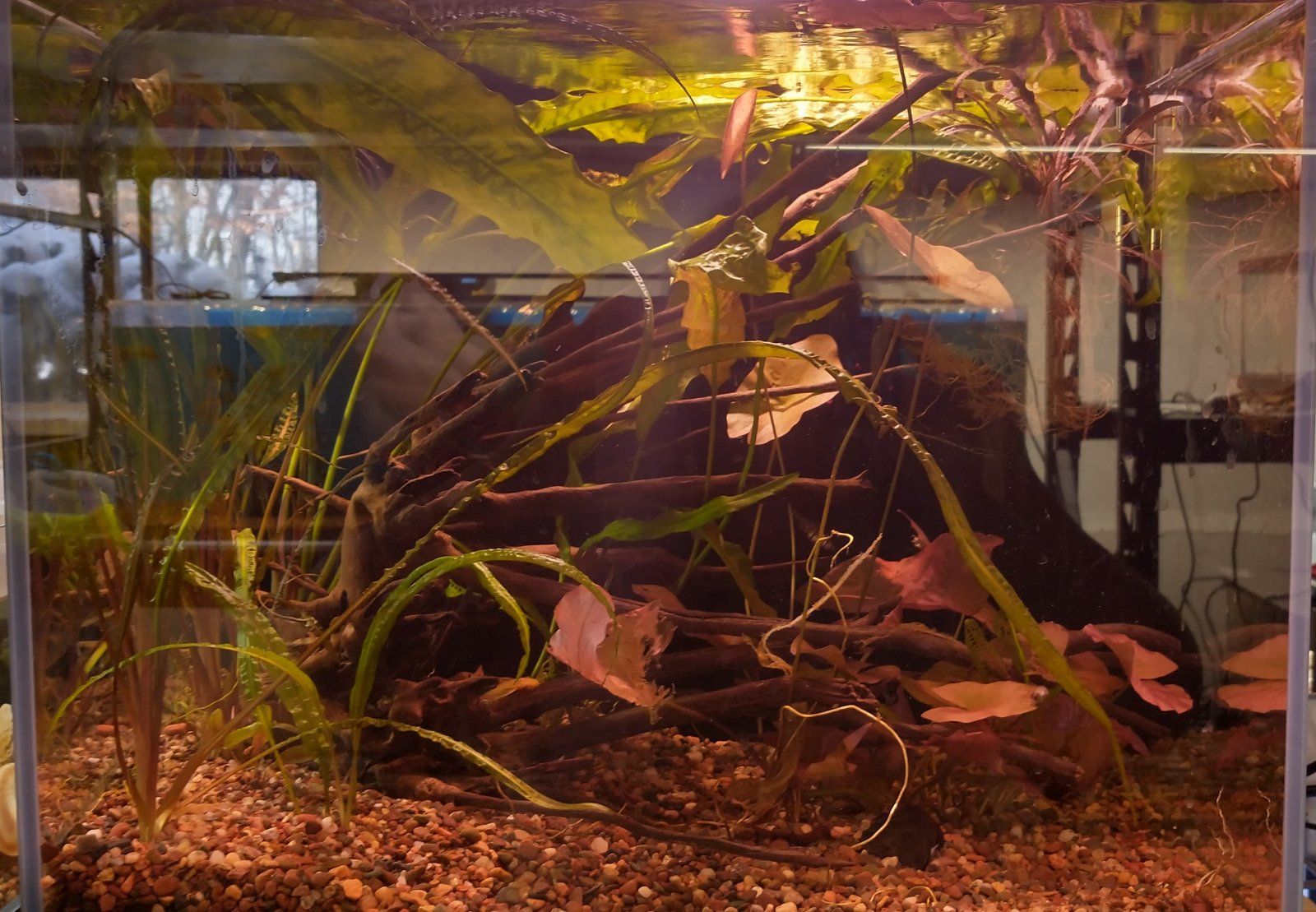 Close up of the female badis that was visible. 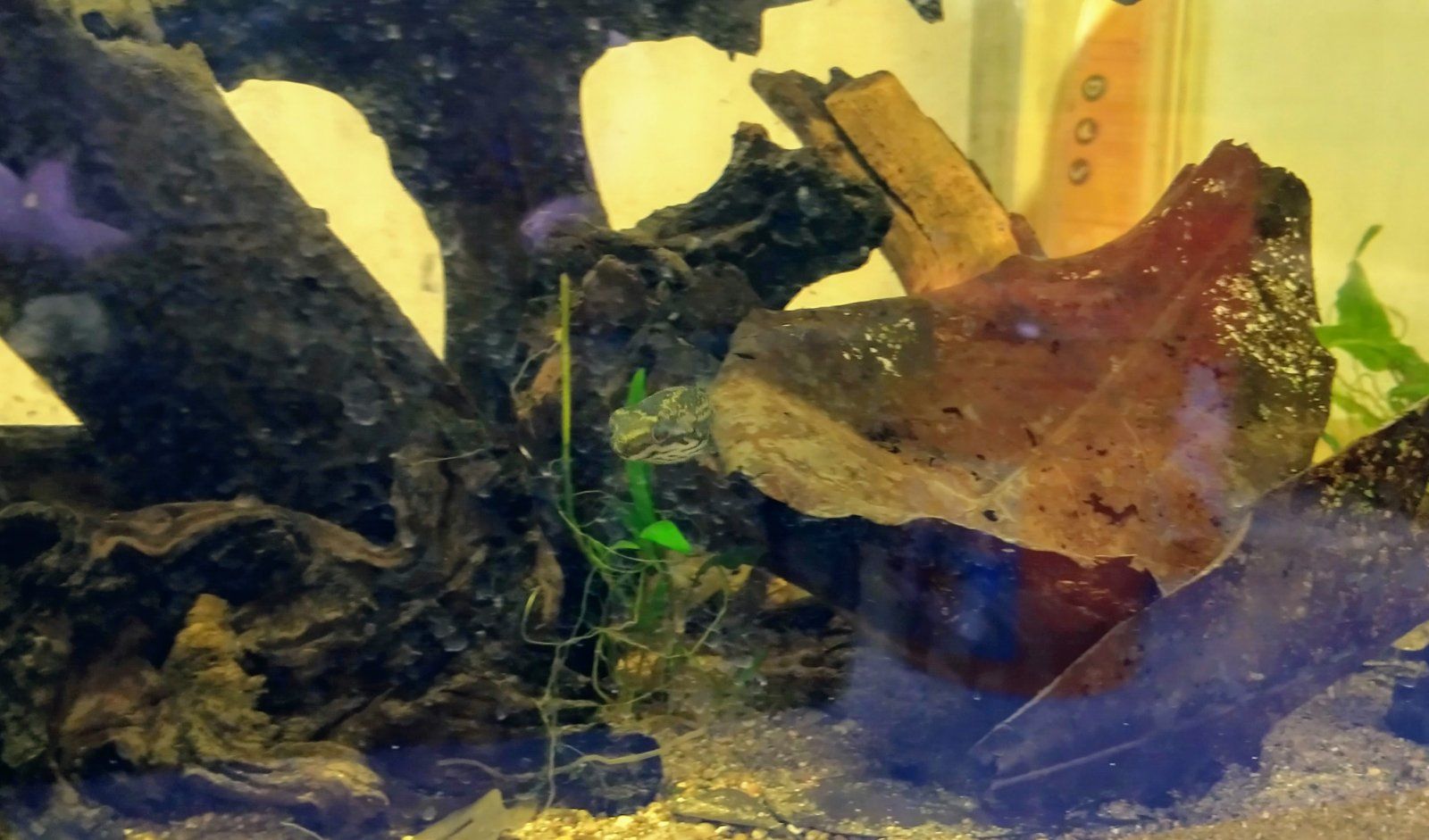 75g acrylic with some small eels, rasbora (harlequin, espei and hengeli), 4 clown plecos (Mars Bar, Mr. Goodbar, KitKat and Butterfinger), a royal pleco, and three schoutedeni puffers (top is Pumpernickel, the bigger one on the bottom is Ginger Bread, and the small one is Pumpkin Bread). The angel is Megatron, and true to his name he is just mean and nasty, which is why he is by himself. Also a smattering of yoyo loaches that are growing up to be moved to a 120 in the future, 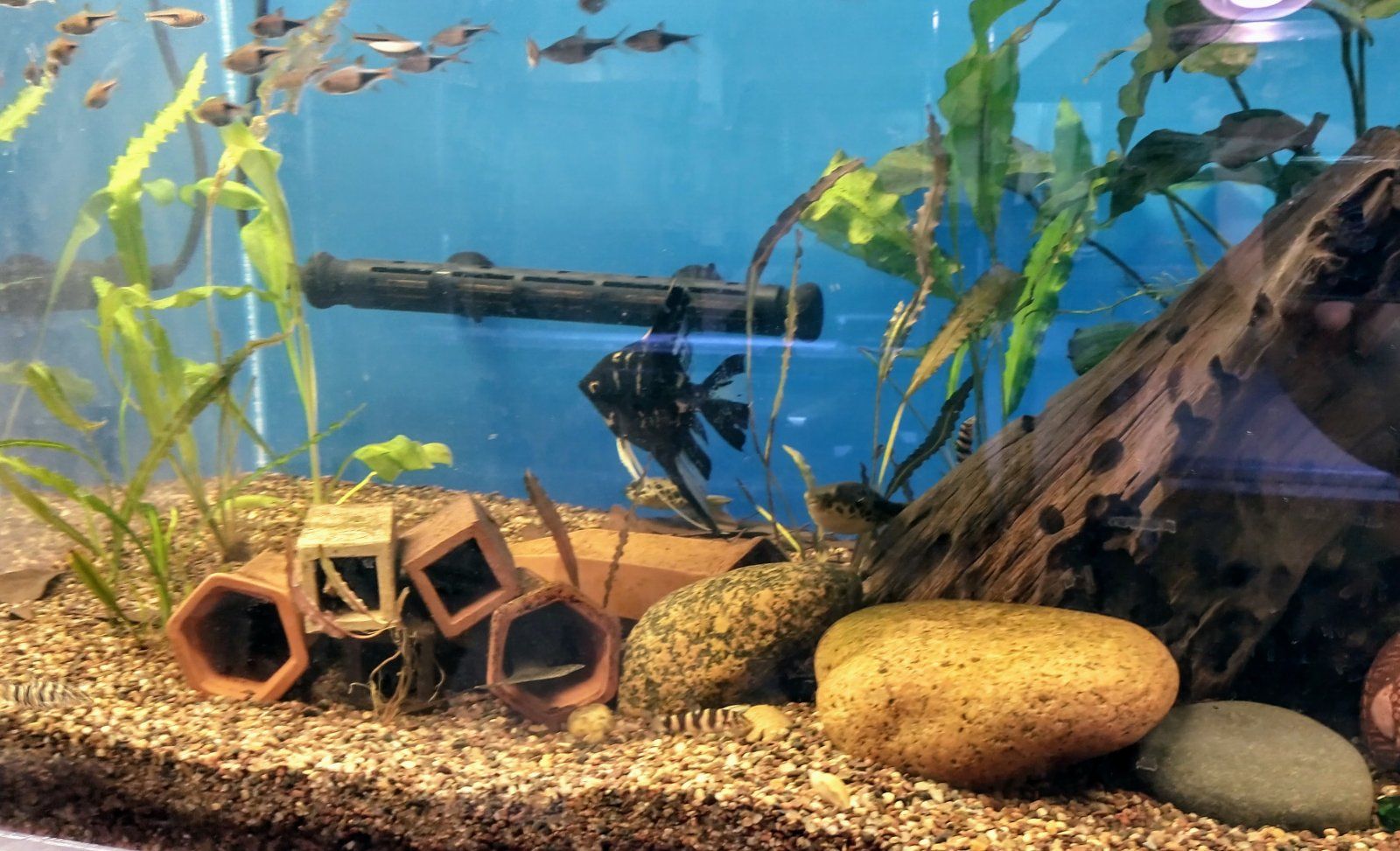 20L brackish tank with 8 gobi and 2 goblin/leaf fish. Looking to bump #'s for both.

Bad photo of the goblin fish. 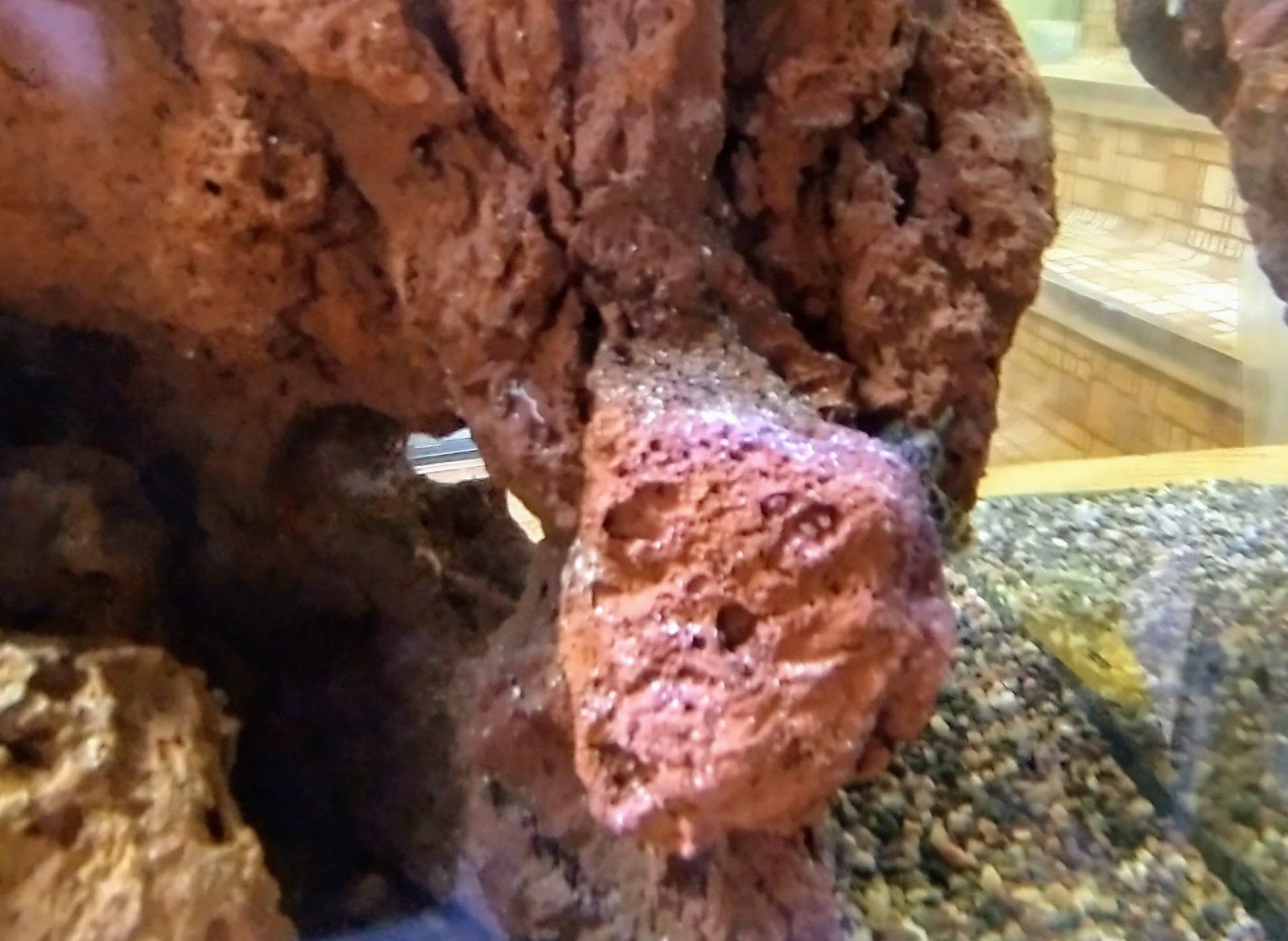 Wow. Just wow. Slimmed down!
Welcome to here. I’ve a feeling you’ve a lot to contribute. Have fun.

Wow you literally have so many of my favourite fish! Amazing set of tanks Which kind of Shell Dwellers do you have?
OP
OP

Thanks! I have had fish for many years and love to keep a variety. The shellies are sumbu dwarf compressiceps.

Thanks for sharing your tanks! I have a fish room too. Most tranquil room in the house! Welcome aboard.

I hope you enter some of your tanks in our Tank of the Month contests. On Feb 1st, we are accepting entries for tanks sized at 31 gallons and larger.
OP
OP

I will, thank you.

Nice pics and rundown of the "slimmed down" fish room, Nat...still busy as ever with the new house?

Looks great,, Nat, especially considering what you and the critters have been through recently!

Wait a minute...you have shadow catfish? As in Hyalobagrus flavus? Would you mind divulging where you got them? I've been trying to find those for ages.
OP
OP

Slaphppy7 said:
Nice pics and rundown of the "slimmed down" fish room, Nat...still busy as ever with the new house?
Click to expand...

Hey Matt! Yeah ton of boxes I still have to go through, not to mention all the fish supplies and setting up the big tanks. Still haven't heard anything about the 180 from the movers claims dept. Will give them a call tomorrow, I emailed them yesterday. I am hoping to get the big tanks set up this weekend, also hope that my plants are OK out of substrate and floating in a tub so long.
Last edited: Jan 28, 2021
OP
OP

WhistlingBadger said:
Looks great,, Nat, especially considering what you and the critters have been through recently!

Wait a minute...you have shadow catfish? As in Hyalobagrus flavus? Would you mind divulging where you got them? I've been trying to find those for ages.
Click to expand...

Thanks, life has been one heck of a ride, still waiting for it to slow down a bit.

How many do you have? I've read that they're really shy unless they're in a school. Curious about your experience with them.
OP
OP

WhistlingBadger said:
How many do you have? I've read that they're really shy unless they're in a school. Curious about your experience with them.
Click to expand...

Currently have 4 left, one somehow jumped out yesterday. Plan is to bump the numbers when we buy some fish (if Wetspot has them). They are very shy at the moment, but when we first go them and had 8 they were a lot more active.

So I re set up the 125. The original gourami grouping are in there (One giant snakeskin, 2 smaller snakskin, 5 pearls, one gold, two moonlight and 4 honey females) I would like to bump up the pearls by two or three. I have Australian rainbows in there and they seem to have grown a lot in the couple weeks tub squatting. Unfortunately on of my large males decided to jump out while I was moving a bucket of fish over. He was dead on floor-lol). I would also like to bump the numbers on them. I have 4 pavo eels (had five but WTH is with eels of every size being kamikaze and leaping to their deaths?) and would also like to get them up to 7. The four Sultan plecos I have went into my (new to me) 120 gallon. My large watermelon royal pleco (Belle) is now in the tank instead and I will be moving over my newly acquired L075 (love my plecos!) I also have 3 SEA in there, had 4 but of course one jumped from the tub a few days ago (have 4 cats and they like to open the lids...). Seems I may be getting some albino millennial rainbows from a friend of my sister's in the future when the weather is safe to ship out fish.

I also finally got the 120 gallon set up (yay!) Currently I have the few remaining broken line tetras in there and the emerald cory/aeneus cory group in there, although it seems I am down by about 6 emeralds. I added 12 green/gold aeneus and 8 albino to the tank today. The tank will have a large school of diamond tetra, black emperor tetra, blue keri tetra and bloodfin tetras in a month or so. If I can catch my smaller royal pleco (Thor), he will be in here as well.

No contact from the moving company regarding my claim. I declined their initial offer and did a deep search to find the paypal receipt of my purchase. They are supposedly escalating my claim.

I decided I was going to keep the busted 180 and make it into an enclosure for my box turtle. I want to make a water feature at one end, something 2'x2' with filtration and have some extra pieces of glass (glass lids for the 180) that I can silicone at one end to for the water. Box turtles love water and I have wanted to build her an enclosure that had a water feature for many years. Plus this way we don't have to haul the tank up the stairs and back out of the house. Unsure if I will get another 180-at least anytime in the immediate future. My Royal plecos will need the 180 in a few years.

Meanwhile I have a lot of fish supplies to sort through and decide what to keep or trash/sell to a local fish store.

The tanks aren't looking too hot right now as the plants need a little time and TLC to recover from their time in the tub. When I think the tanks are more presentable I will snag some pics.

I really like your tank menagerie, and love it that I can live vicariously through you. My biggest tank is 12.7 gallons and I adore the critters and process, and the fact that my KSA (Knight in Shining Armor) is willing to put up with my crazy routine of talking to critters that are less than one inch long. Your tanks are absolutely beautiful, so thank you so much for sharing!

Looking forward to the updates!

You need to quit buying suicidal fish! ha ha ha Thanks for the info on shadow cats. I think a few would go great in my rice paddy tank, but I'm also pondering just going with some snails for bottom feeders, since I'm hoping to get breeding populations of blue and dwarf rasboras going, and catfish (or loaches) might not be the thing for that...
You must log in or register to reply here.