Been MIA for a bit, but got some updates with the fishroom tanks. We have slimmed down a little, took another rack down that was holding two 50 gallon Zoo Med low boy tanks. One with the Dojo loaches/gold barbs was moved to another rack. The other with the purple smilers/wild blue acara, whiptail cats and Ghost my BN pleco was broken down. Ghost went to the 5' long 120 gallon, the others went to my 4'x2' (S. American) 120 gallon. Set up another NSF wire shelf for some smaller tanks and to make room on the Huskey rack for the 50 gallon low boy with the Dojo loaches.

Also placed multiple orders for plants (HUGE mistake) as well as an order through The Wet Spot for the majority of tetras that will be going into the SA 120 gallon as well as a couple other fish to round some of the other tanks out.

All of the fish except for #1, 8, 9 and 10 are in quarantine, have gone through 2 days of medication and will spend the rest of the month or so in QT to make sure they are healthy and to give them some time to grow up a bit.

Was also expecting some Albino Millennium rainbowfish and a Tapir eel from my Sister's friend in OH. Unfortunately she sent them USPS overnight (the day they stopped guaranteeing overnight delivery). They sat in OH for days, and took a week to get to a delivery point. The morning they were going to be delivered the USPS truck sat outside the house as the driver was writing them up as undeliverable. Had to go outside and argue with him for the package. Claimed he knocked (we have functioning doorbell) but no one was home. THREE people were home! By this time we were expecting the worst, and the rainbows were dead in unmentionable quality. The eel was 98% dead, we ran him downstairs and threw him into the 125. Hours later he was still breathing hard, probably through the burns on his gills due to the ammonia in the bag but he was no on his side anymore and even ate a small earthworm. The next day he was more active and seems to be recovering. Have had too many eel on the brink of death to be 100% sure if he will make it but I am hopeful. So don't use USPS if your shipping anything alive. Pay more for UPS or FedEx. USPS just don't care, my sister's friend went back the next day to the post office to try and get the package back, they lied to her and said it went out on the truck that morning even thought they sat on it another day before finally scanning it as leaving their facility (three days later). Its an EIGHT hour drive from OH to IL, took them a week to deliver it, so sad and the box was recycled from Aqua Imports and said live fish and perishable all over the darn thing!

Stopped at the store today and picked up some gold pristella (leusistic), and few more diamond tetra for the SA 120. Also got three more gold barbs to add to the seven in the Dojo tank and some other small fish for my 22 gallon.

This video is prior the new fish today, I shot it last night, sorry for the length but it takes a bit to go through the area.

Pethia gelius, the golden dwarf barb are the fish I added to the 22 gallon. If I get a chance I will get some photos of them.

Wow, gorgeous tanks! How do you keep on top of all that maintenance you must be doing? Very admirable.
OP
OP

PlasticGalaxy said:
Wow, gorgeous tanks! How do you keep on top of all that maintenance you must be doing? Very admirable.
Click to expand...

Thank you. Maintenance isn't hard. Takes an hour to do WC on the tanks. Let gravity empty the bigger tanks as the python powers through the smaller ones. Joy to feed them in the morning. We had a few more in the last house, this is peaceful in comparison, lol.

Boundava said:
Thank you. Maintenance isn't hard. Takes an hour to do WC on the tanks. Let gravity empty the bigger tanks as the python powers through the smaller ones. Joy to feed them in the morning. We had a few more in the last house, this is peaceful in comparison, lol.
Click to expand...

" We had a few more in the last house"

^^ Understatement of the year ^^
OP
OP

Lol, Matt...ok a bit more than a few. That was a chore for maintenance! Though all of the sponge filters helped with filter maintenance, the WC took two+ hours but we had to split it over 2 days due to the hot water. Good thing the 350 gallon tub was cold water and the sump was right there for draining the tank. Filter cleaning shouldn't be too bad here, I am glad the FX4s are so easy to clean and set up again, and the other tanks are a mix of Marineland, sponge and a couple internal Fluval filters, so they are easy to clean as well.

Have to say I am really enjoying our slimmed down room. Can't believe we moved in on 1/19. Still have some organizing to do, and landscaping in the 125. I am trying to get some apanos in the background and crypts in the front. Made an order for 12 plants form BP, four apano species and lagahandra meboldi red long. They sent me 5 plants-one each and one of the plants was DOA and three inches shorter than their descriptions said it was supposed to be. They said they would resend the complete order, but shipped it to my old Chicago work address-though the first order was addressed to my home. They must have contacted FedEx about the address change because tracking went from in transit to stopped (check with the seller as to why). When I contacted BP and told them I wanted a full refund, the shorted me $35+ and told me I had been refunded. Then they went no contact when I told them they did not refund me for the plant that was DOA or the two other bulbs they never sent. After 7 days in transit FedEx delivered a box of mushy bulbs and rotting pots of meboldi. They didn't even bother to replace the lace plant I bought with a plant-they sent a bulb instead (half of what I paid for).

I have never been happy with how BP ships their plants, whoever fills the orders must really hate their job because they have no pride in their work, but this has been one mess up on another on another. I wish there was a better selection of plants available here in the US and that I didn't love planting with live plants so much.

@Boundava
Dang.
I've been thinking over the past few days what a cute cat that is in your profile pic.
I don't even know half of what you have stock-wise.
Looking forward to fish close-ups and give kitty a head-butt for me ♡
OP
OP

That kitty is Zelda. She is two. She was born outside and a friend of my sister caught her. She resembled a calico we had that passed recently, so we drove to Michigan to pick her up. She is a little hellion, and by little she's our smallest cat. Also have Wednesday, Bowie, and Kermie (Kermit).

Here's Bowie, he's the oldest. We adopted him from Save a Pet and he is a cat full of love but nothing else, lol. He is going to be 8 in April.

This is Wednesday our Torrie. Also adopted but from Orphan's of the storm. We kept her name thinking it was in reference to Wednesday Addams, it's not. This girl is in the middle of everything...hence Wednesday, lol. She is 7. 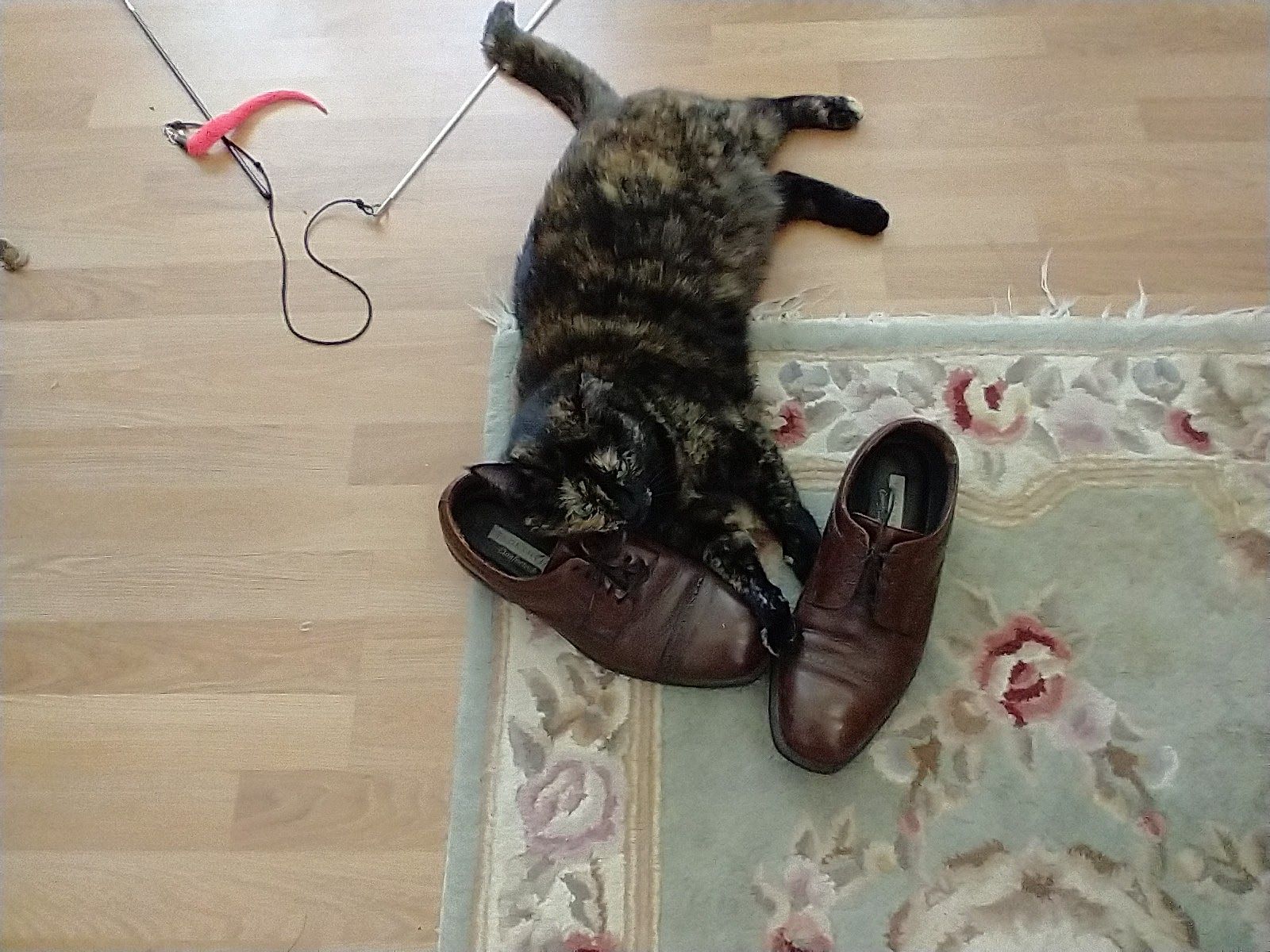 This is Kermie, he is a year and two months and will be the biggest cat in the house (50% Maine coon and has Siberian too along with short hair, we DNA tested all the cats). he's already at the same size as the two big cats Wednesday and Bowie. We also adopted him from Orphans of the Storm. I guess he was socialized with dogs so he's having a very hard time adjusting to our cats except for the little one Zelda, she's trying to train him to be a cat - it's the funniest thing! 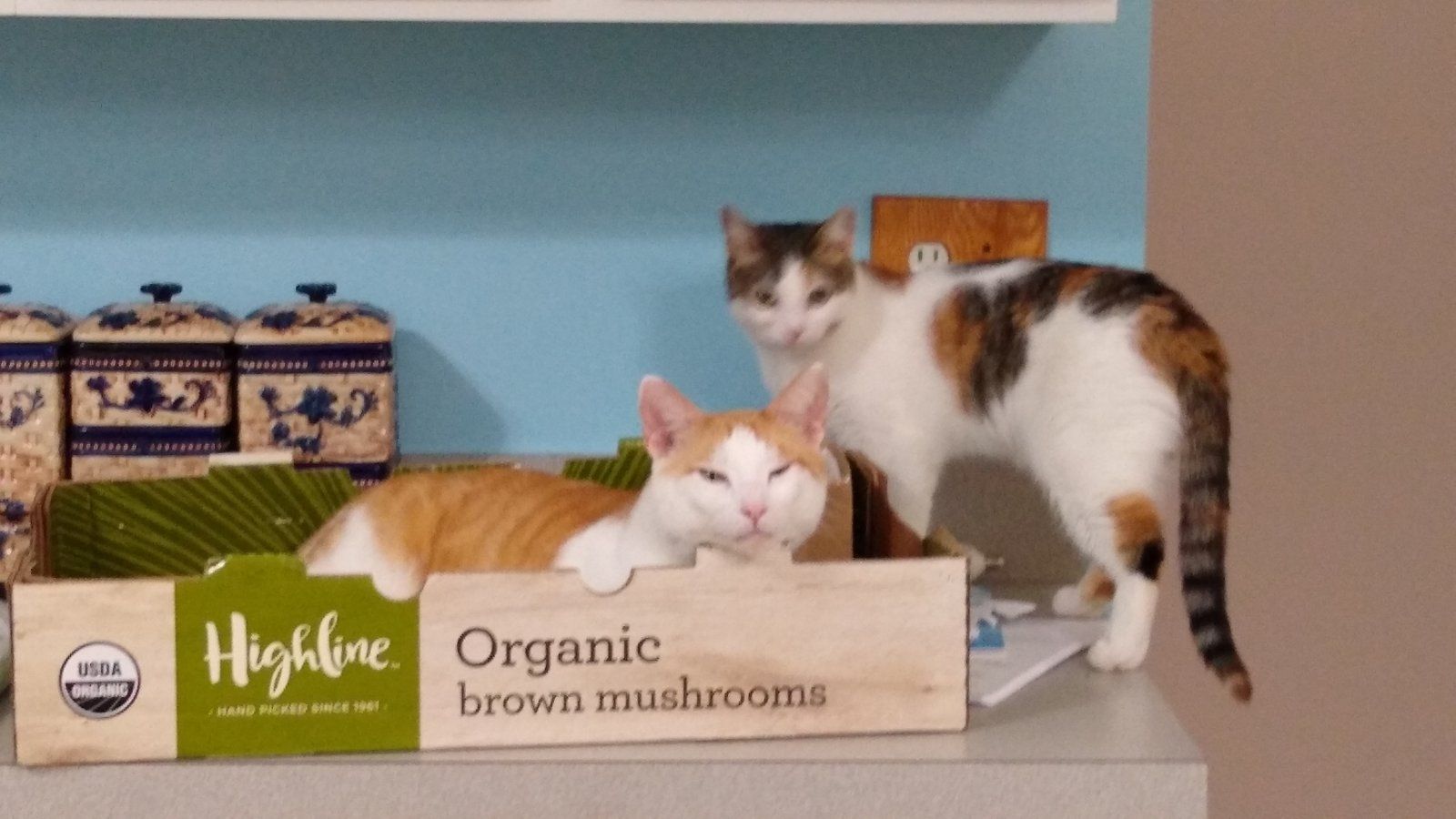 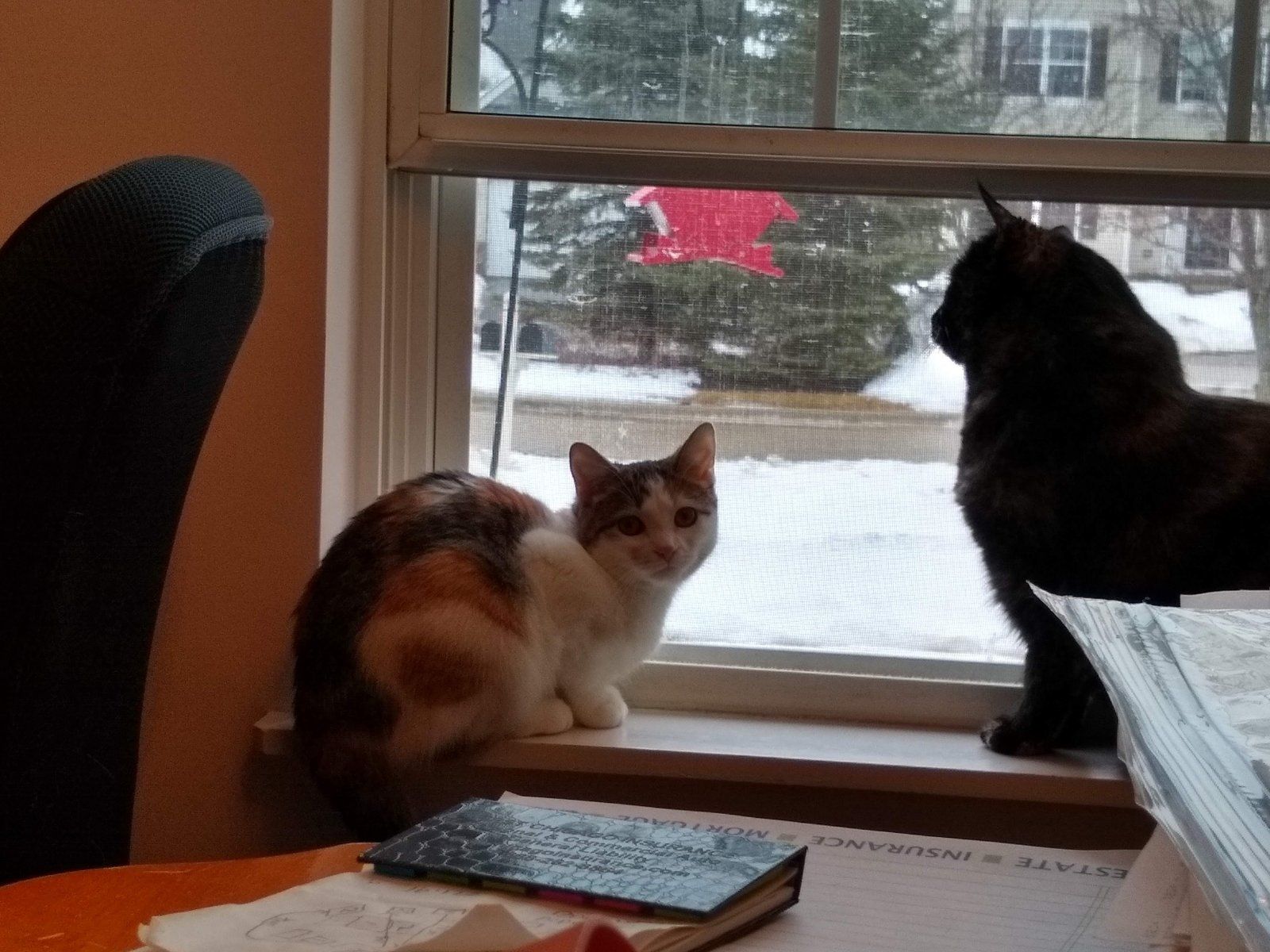 Well my 120 is finally fully stocked. Moved the fish out of QT and have a nicely stocked tank. I also ramble through to the other tanks that still had their lights on.

Video link below, my computer is down and I don't want to upload to YouTube via phone. 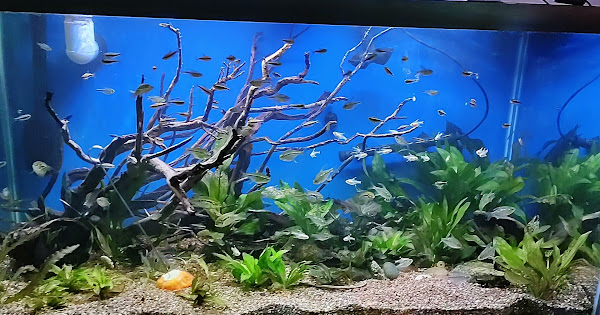 Off the top of my head these are the fish in the 120 (the 2'x4' tank) and aprox #s (*aprox as some fish were not what I ordered)
Tetras
Plecos
Corys
Chiclids
Other not staying (lol)
I totally forgot that there are also five B. coracoideus (banjo cats) in here too.

Thanks, I have to get a new video though. It's changed a little bit in the past month.
OP
OP

Well I was doing a WC on my brackish tank, turned out to be a deeper clean than I originally thought, when I turned to the 120 and saw it was dark though the lights were on-both of them. Turns out my tiger lotus found some steroids in the tank since I saw her the other day and went full pond mode with more than half a dozen leaves, effectively covering 95% of the surface, hence the black tank. I didn't get a before pic, but here is one of the leaves I pulled out (excuse my large Yugoslavian hands-any Weird Al fans out there? 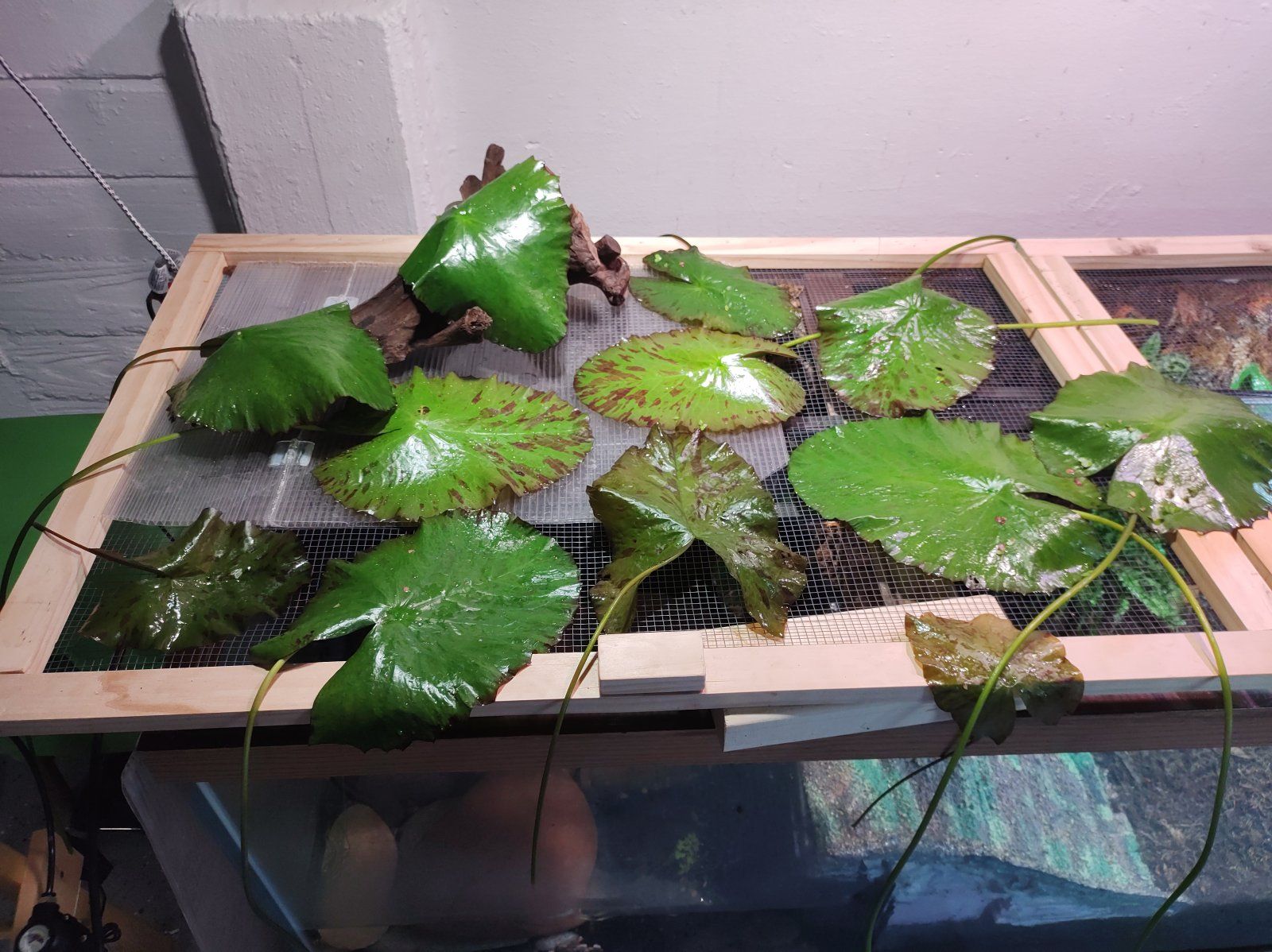 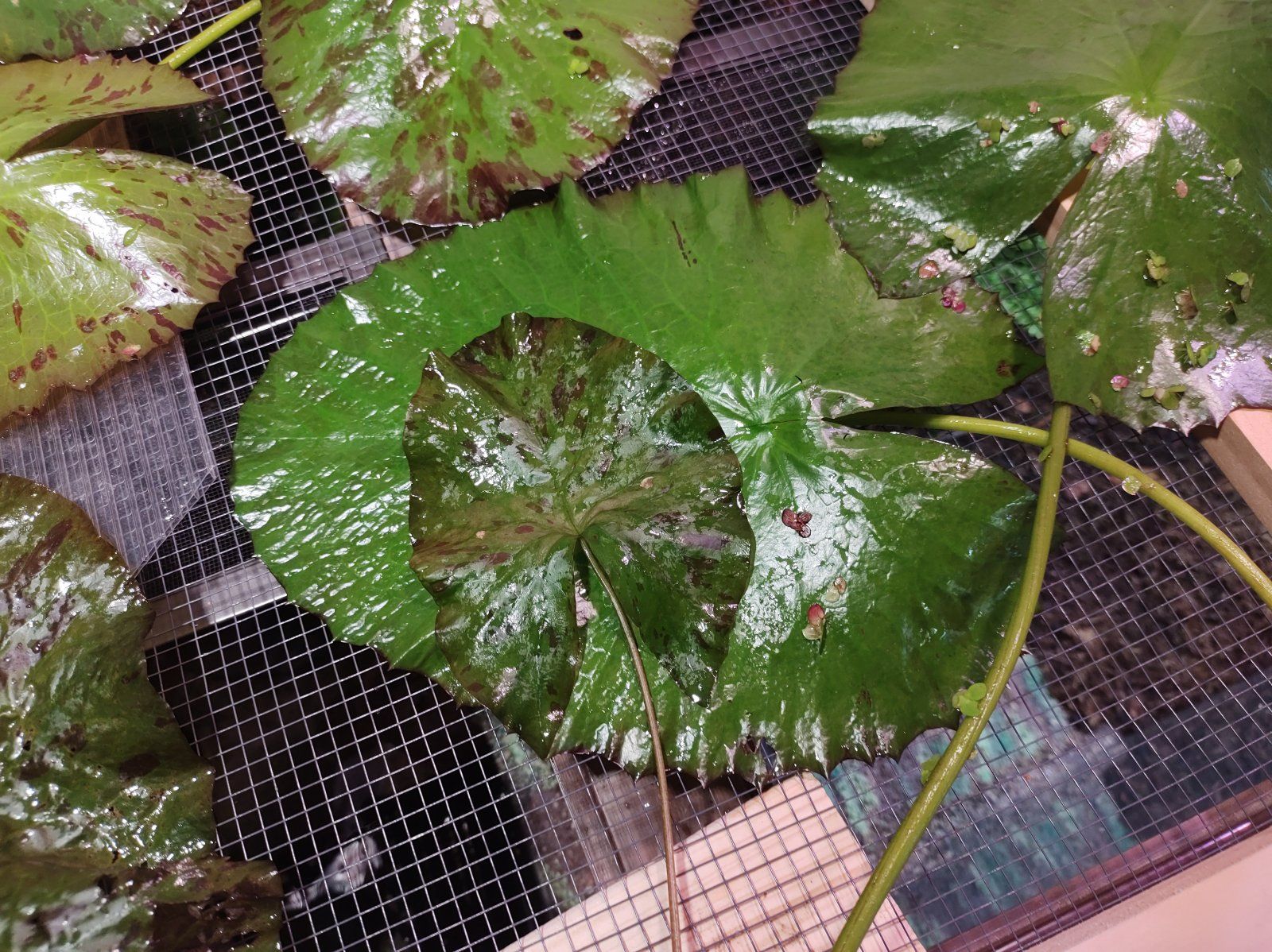 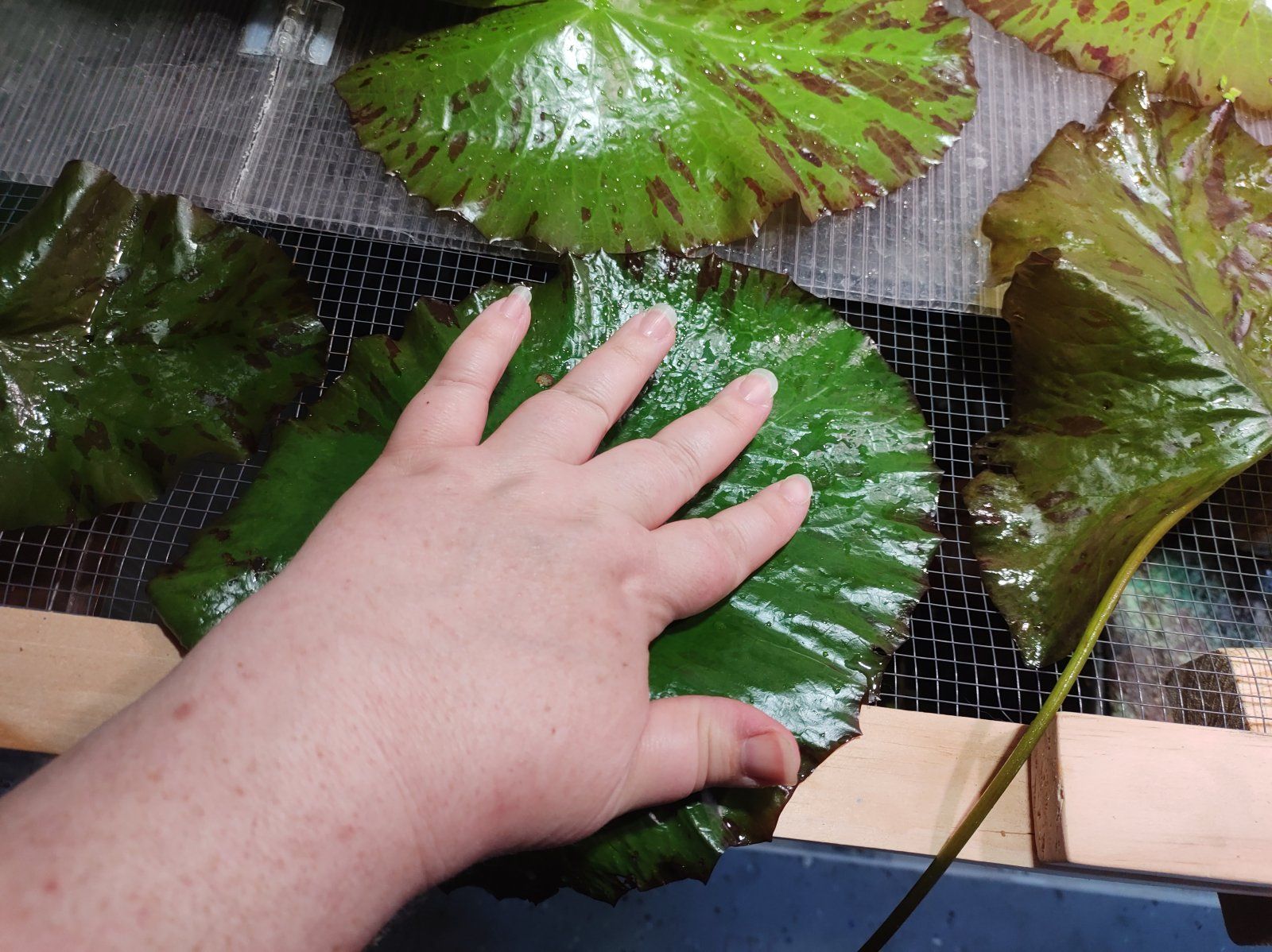 They are sitting on top of the 180-my box turtle enclosure. I left a couple large leaves in the tank because I couldn't get to them and the tetras were nipping me like a swarm of flies. I have a few in the tank... 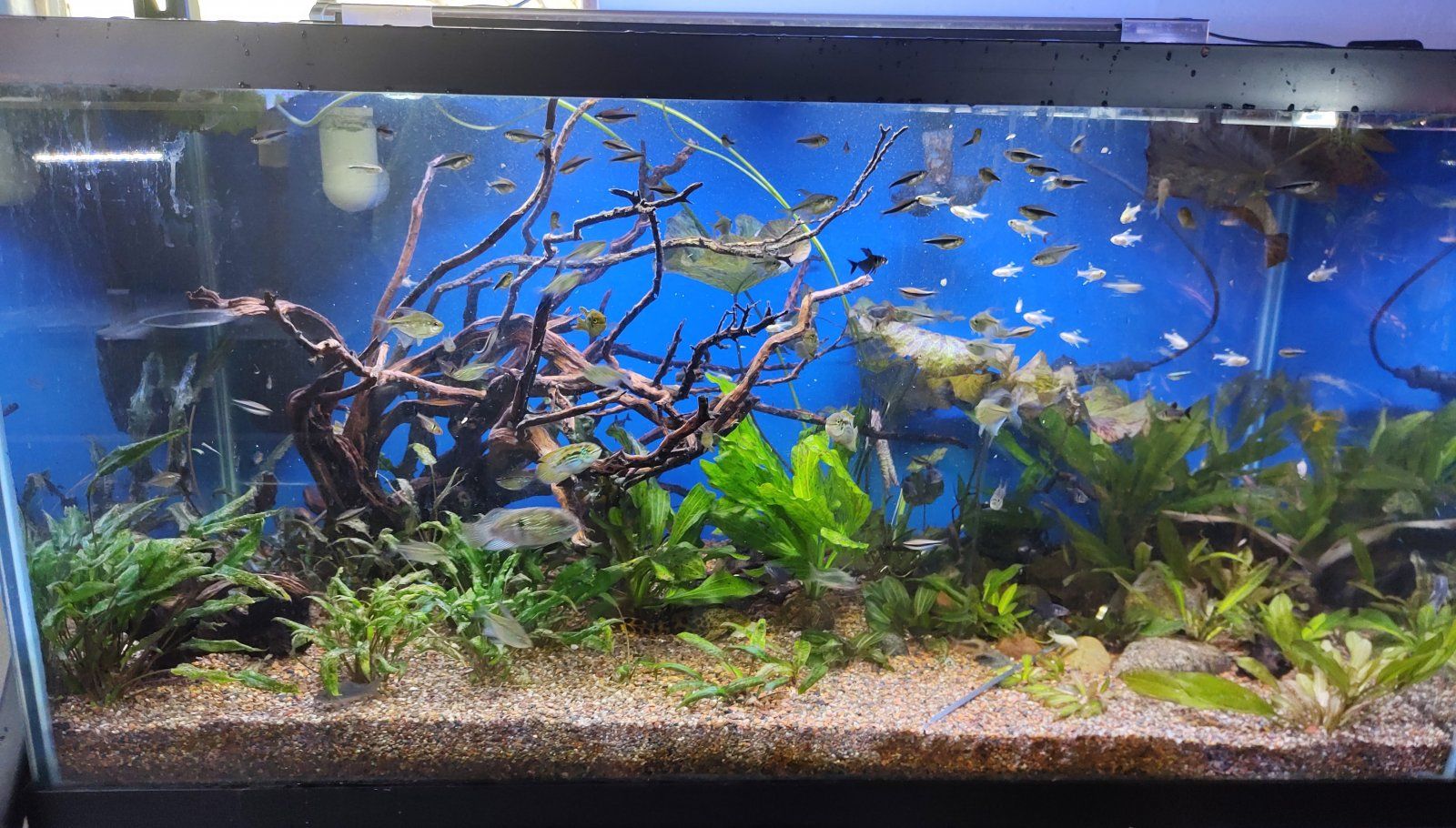 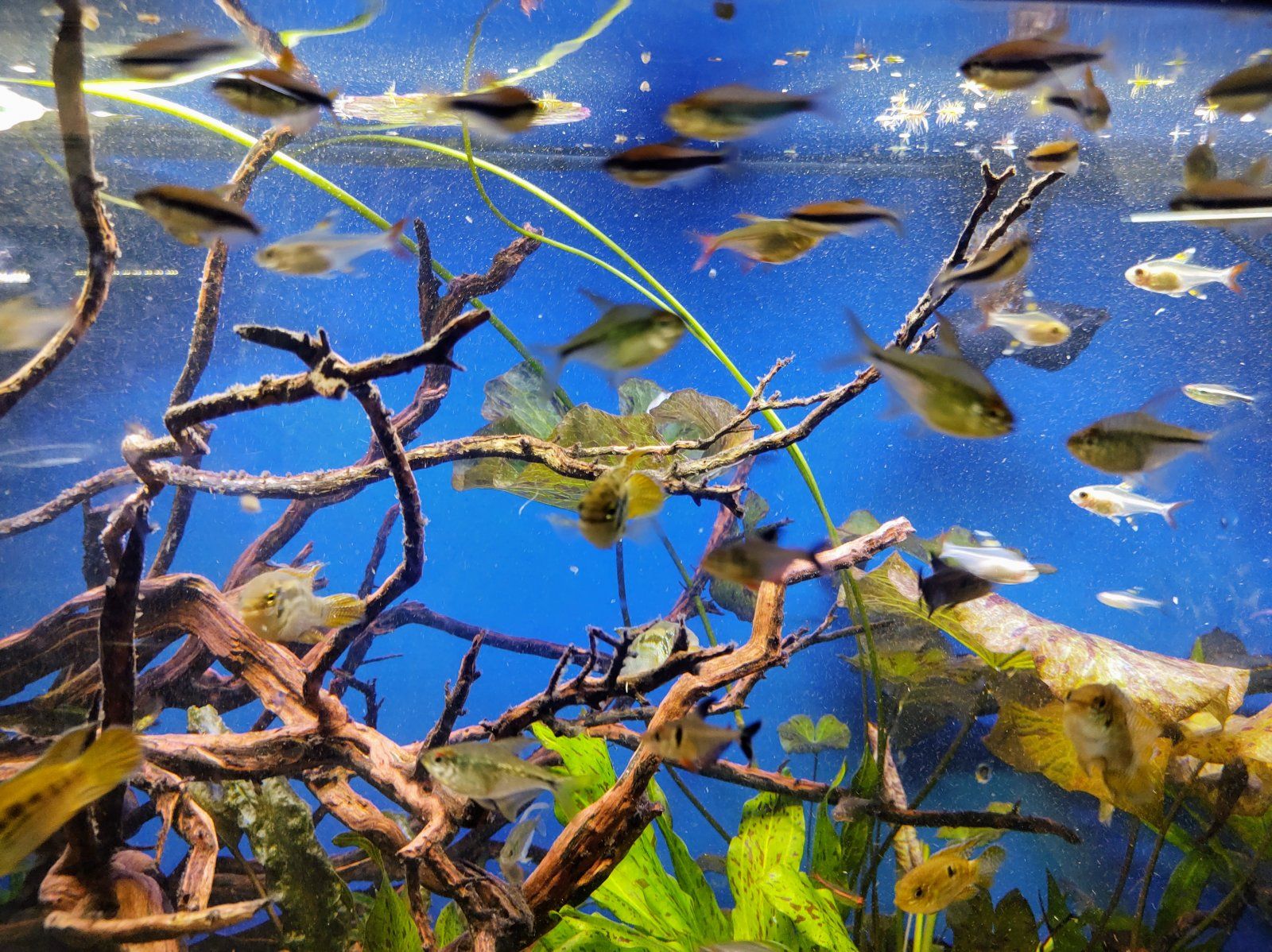 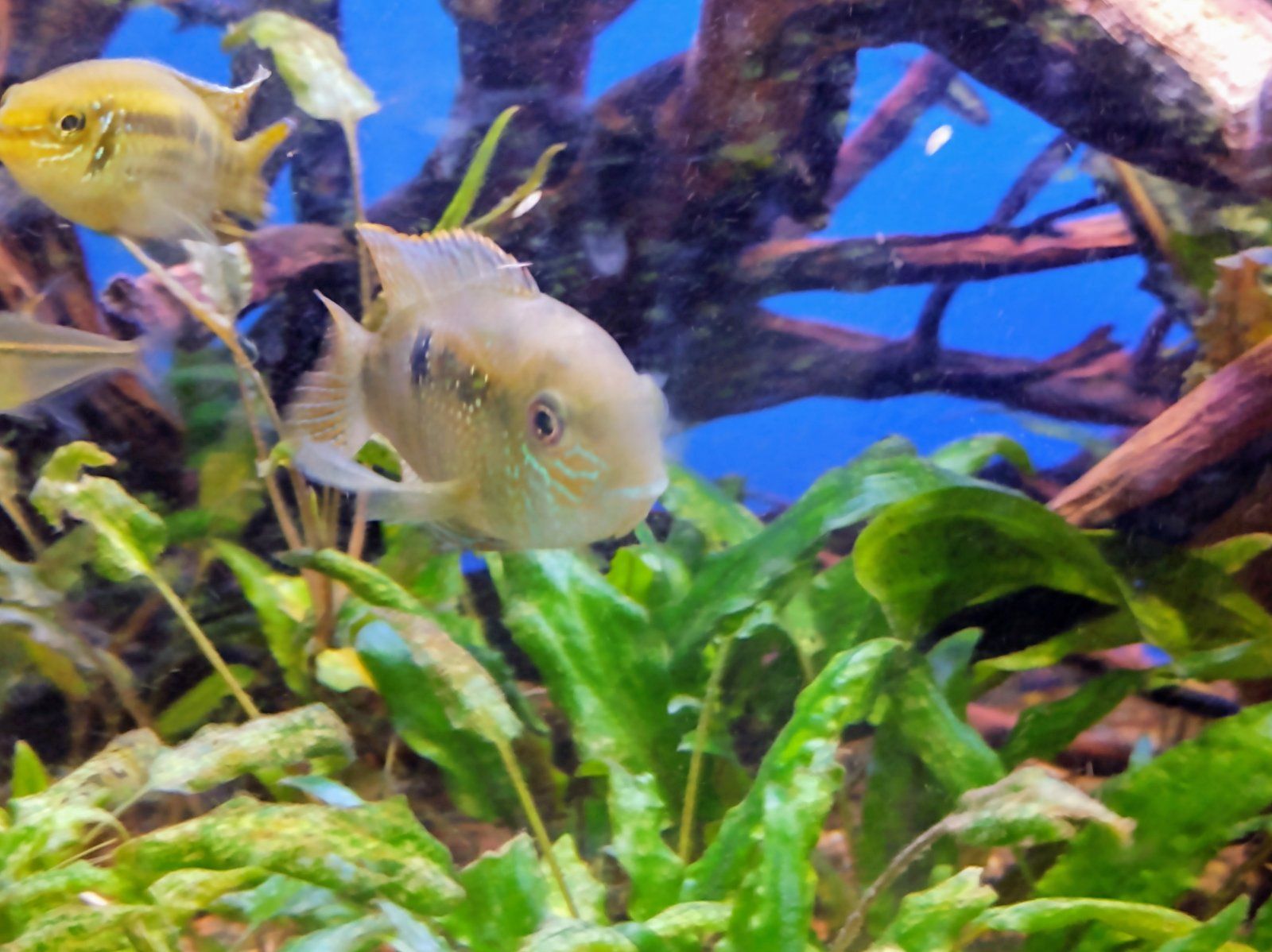 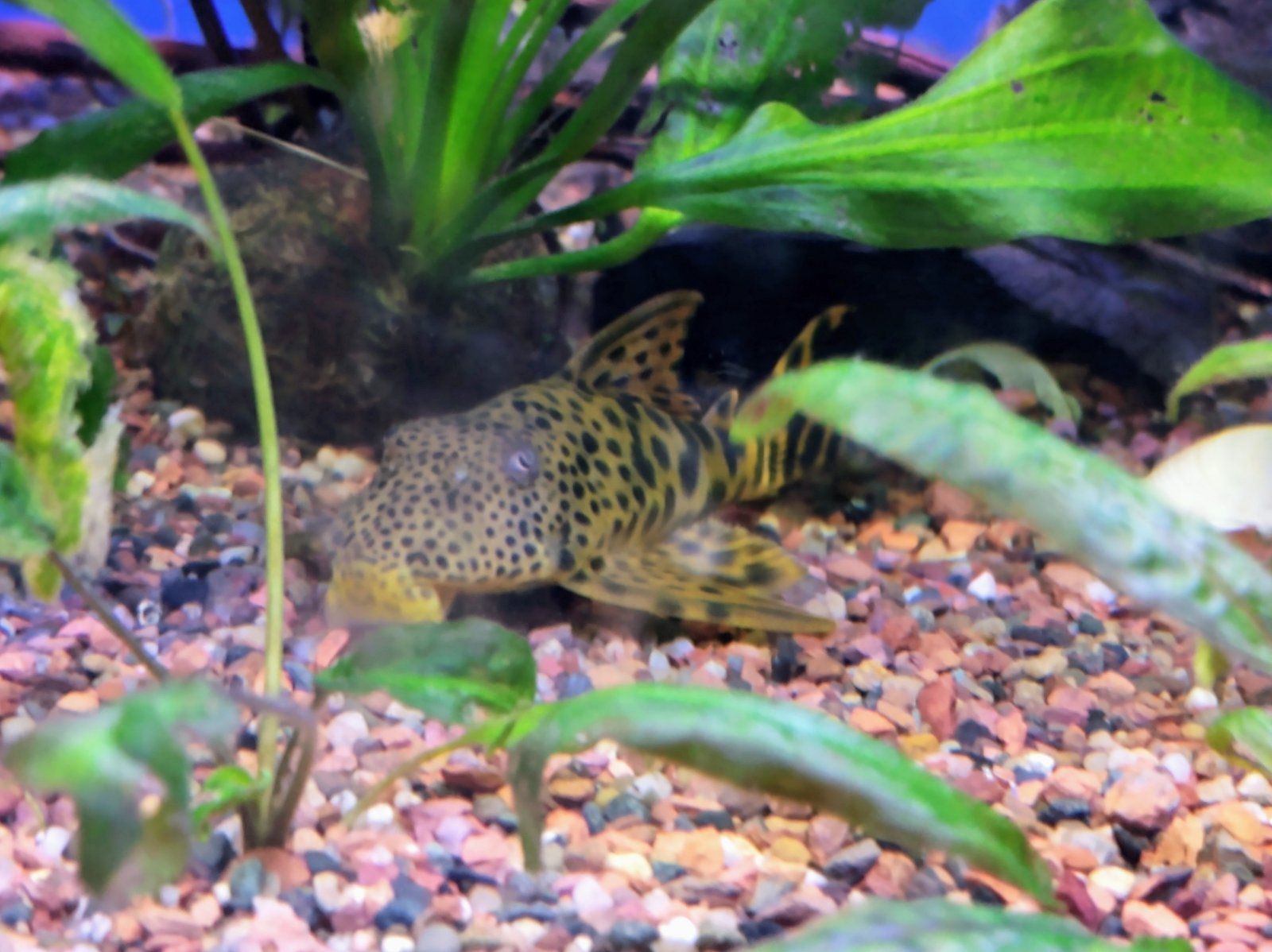 But this guy and his two smaller friends went from destroying my swords to eating my crypts!

Pretty...
What is your substrate?
OP
OP

Depends on the tank. The 120 with all the tetras is medium Red Flint sand topped off with red Eco complete. Same for the 125 withe the gouramis and rainbow fish.
OP
OP

So I found the grow light I had on the 125 in the last house (moving sucks and some things get buried to be found at inopportune times or never to be found again!) Since the 125 had some replacements (said moving sucks, lol) I decided to add them to the 120 as the 2' width really left the ends of the tank needing some illumination as well as the peckoltia destroying the crypts that I had replaced the swords they had eaten into lace. 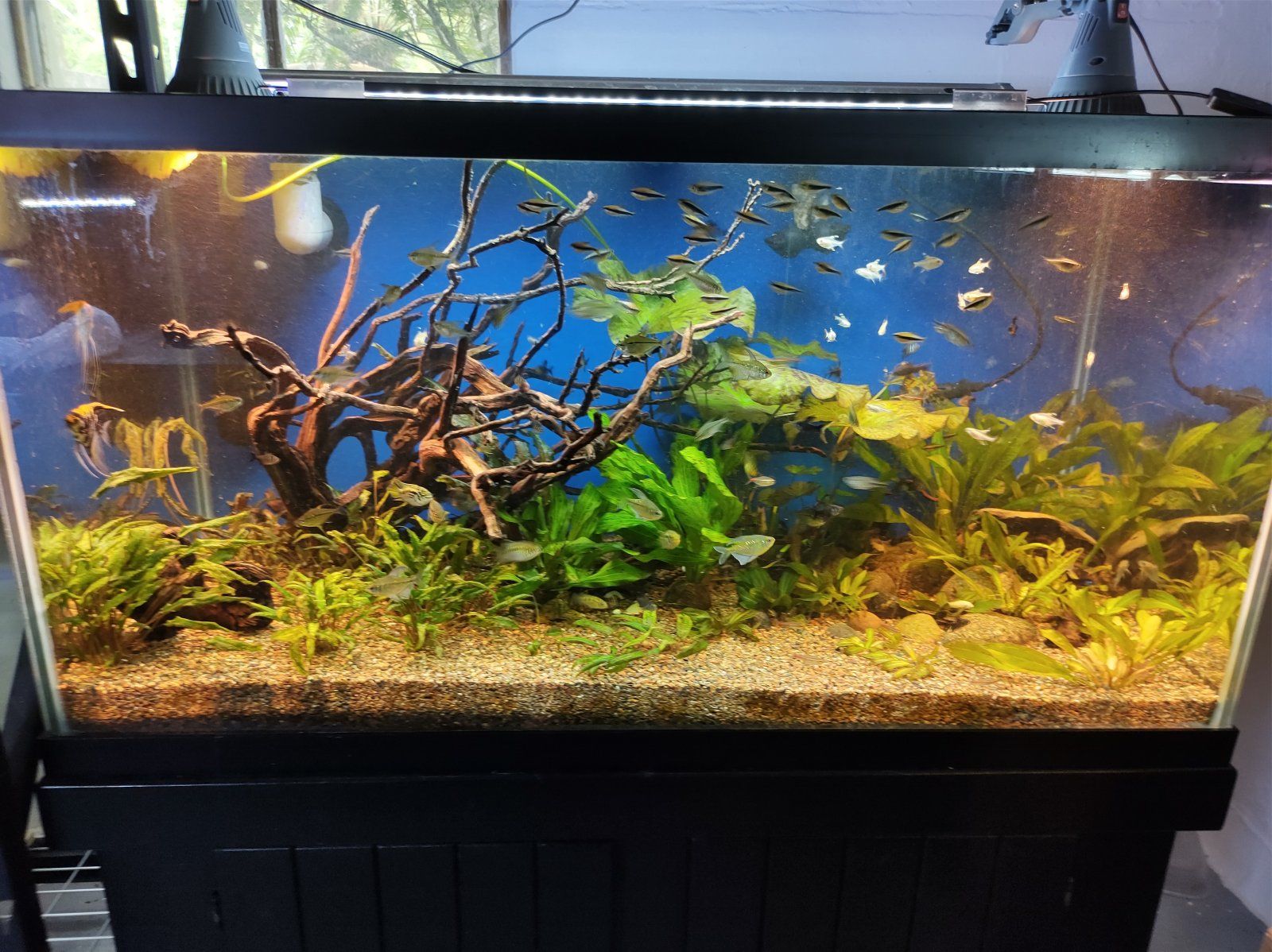 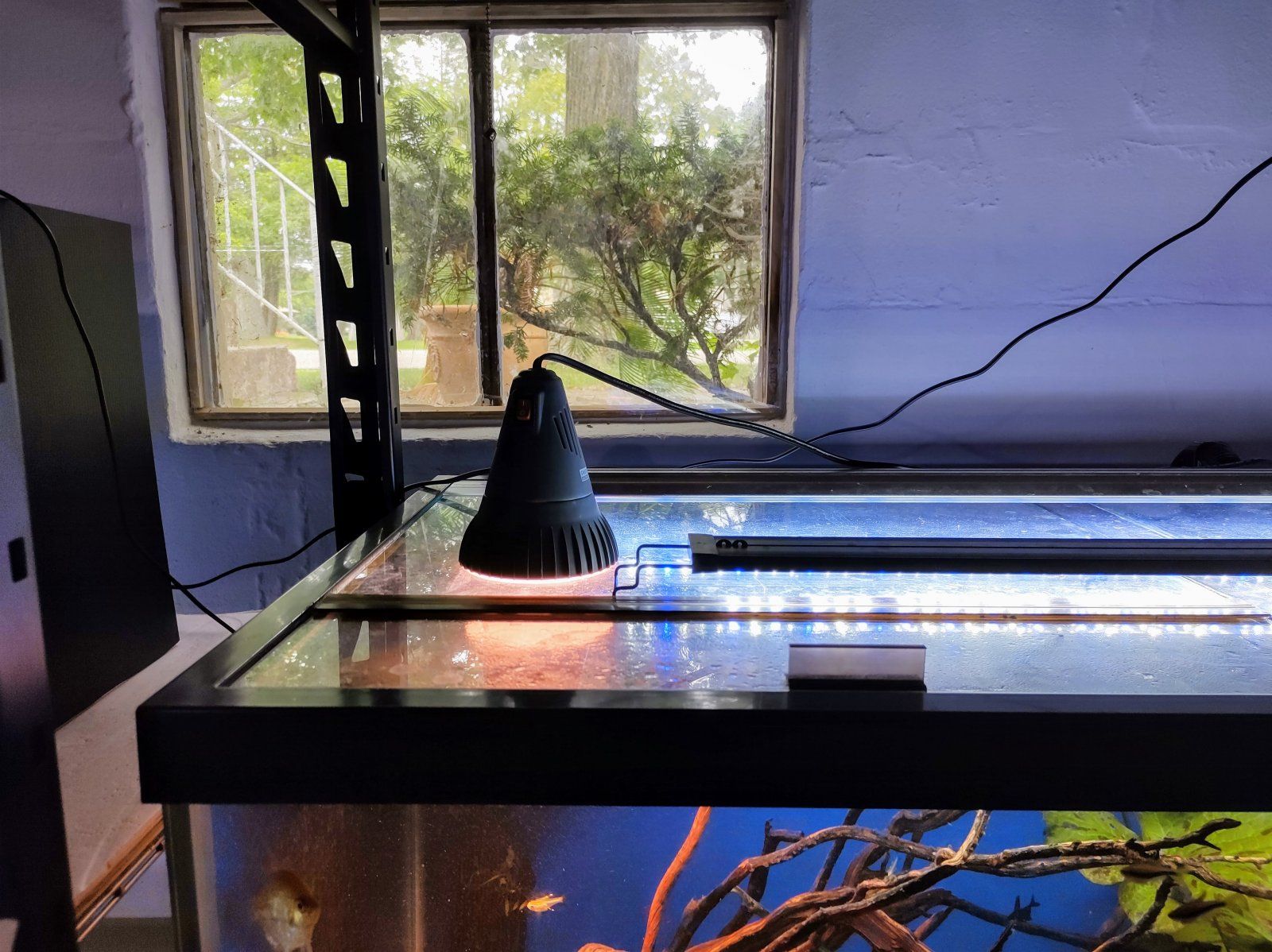