Your so funny Matt...we only moved 30 tanks. 😋 Though three of those were monsters.

We moved about 26 miles north east. We are about 1.5 miles from the WI border and two blocks from Lake Michigan marina and Illinois beach state park. It's a bike ride away 😁

Oh, well, if it's only THIRTY, what on earth are you complaining about?

Your new location sounds great! I kind of lost track of all your travels. Are you still with your sis? Does this feel like a permanent home (as permanent as any home is in this world, of course)? How did your job situation pan out? (PM me if you don't want to talk about it publically)

Boundava said:
Your so funny Matt...we only moved 30 tanks. 😋 Though three of those were monsters.

We moved about 26 miles north east. We are about 1.5 miles from the WI border and two blocks from Lake Michigan marina and Illinois beach state park. It's a bike ride away 😁
Click to expand...

Hey Tom! Yeah Mom would up having to go to a nursing home, her health was deteriorating quickly, she has been in one since last August. Due to her medical status we had to put the house on the market and look for one that was in our budget. Fortunately this happened during that freak SELL, SELL, BUY, BUY market so the house had an offer fast (it fell thru due to financing) but another offer that we were able to accept and closed on 1/19/21, a few month after putting it on the market but at the tail end of the selling/buying craze. Got a fixer upper cape code style with a nice converted attic space and a just right sized basement which encouraged us to slim down. Last summer I was selling tanks left and right so we didn't have to move with what we weren't going to use. Sold a bunch of furniture too as the current house has a more functioning layout (it has separate ROOMS-hated that about the last house) and no big open great rooms to accommodate bulky items like china cabinets, armories, side tables, too many chairs...lol. Also Mom isn't improving so she will be in a nursing home forever.

House has good foundation, needs alot of work including new windows, some new floors, some insulation in the add on portion from the late 80's and the garage needs new doors and trim and paint...house needs new wiring, paint, just a lot to do but we are working on it bit by bit with some help from the family.
You don't have experience with that, right...lol.

The job laid me off late Sept 2020. I am looking for work as the extended stimulus is ending Sept 2021 in IL, unless its is extended. Its hard finding anything that is comparable to what I was making. Have applied at about 30 ish places right now, but no luck. May just go with something to get some $$ and go to school PT to get a certificate in phlebotomy. There is a Cancer Treatment Center about a mile away from me and they are hiring Lab Techs all the time with good pay. I tried with my BA in biology, but they were a no.

Is your new home all set up or still some work in progress?

Yeah, homes, like people, are always works in progress, but we're pretty settled in here. I like it. Definitely a downgrade on the property size, and we're hoping to get back the the country someday, but it's nice not having a ton of landscaping projects all summer (remember that pond I built and lined with rocks??? ), and it's nice being close to friends and closer to the mountains. And hey, it's paid off, so that's worth a lot.

It is nice to be out of the cold microclimate, too. The veggies are growing a LOT better here.
OP
OP

Yeah I remember the pond, it was/is beautiful.

I miss it. But I don't miss repairing the liner and moving rocks in and out every summer. ha ha
OP
OP

So its summer time which means watermelons! 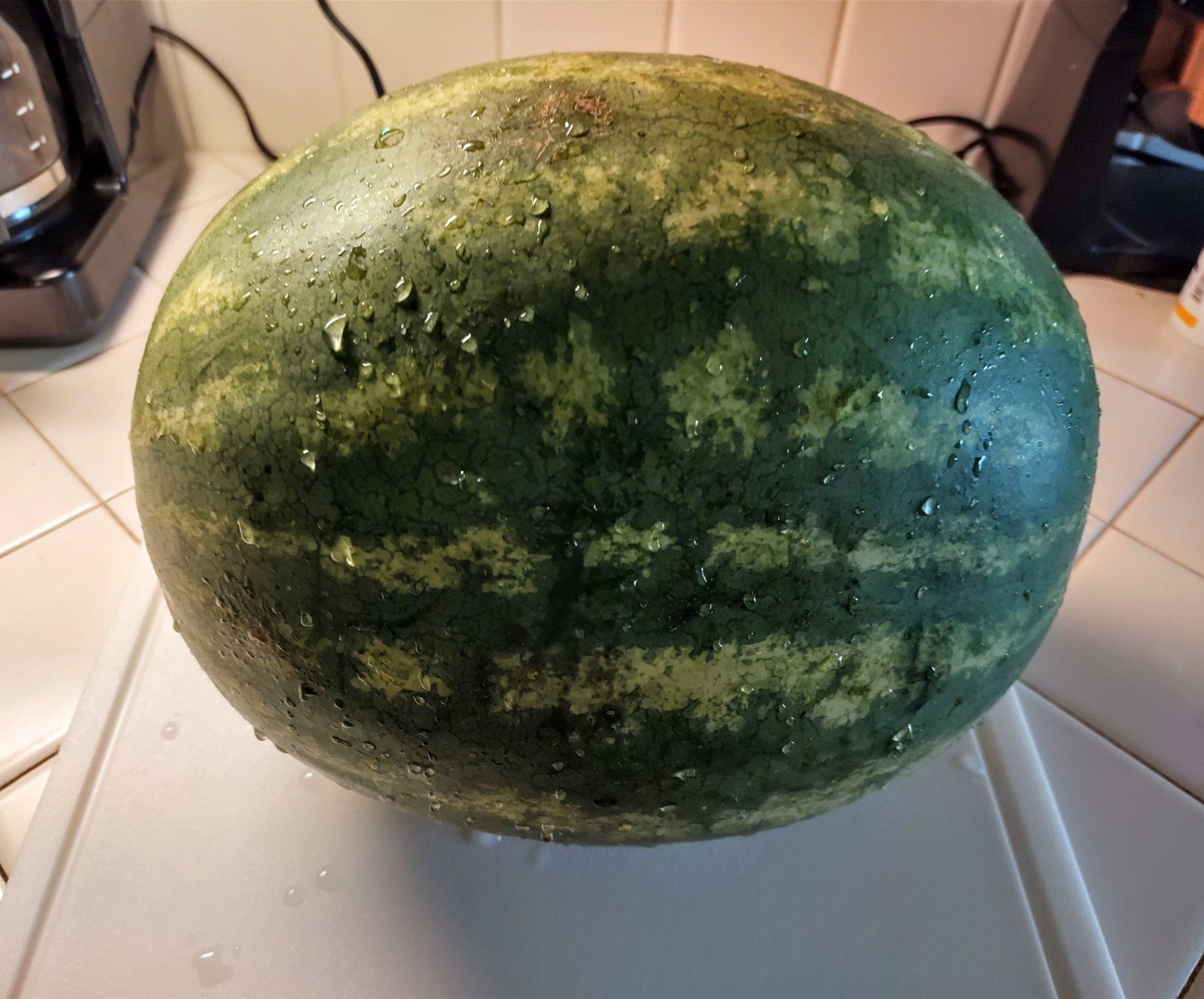 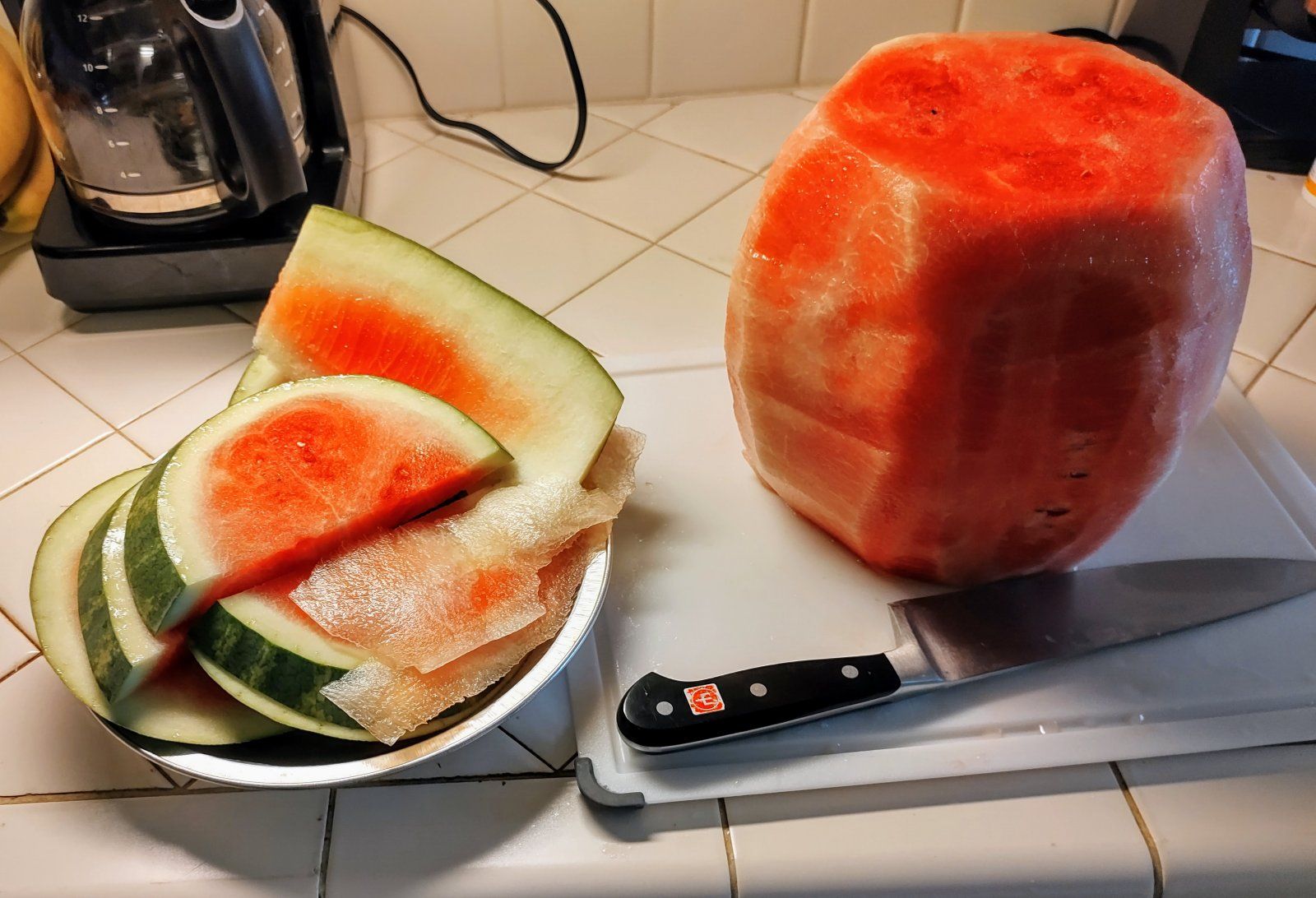 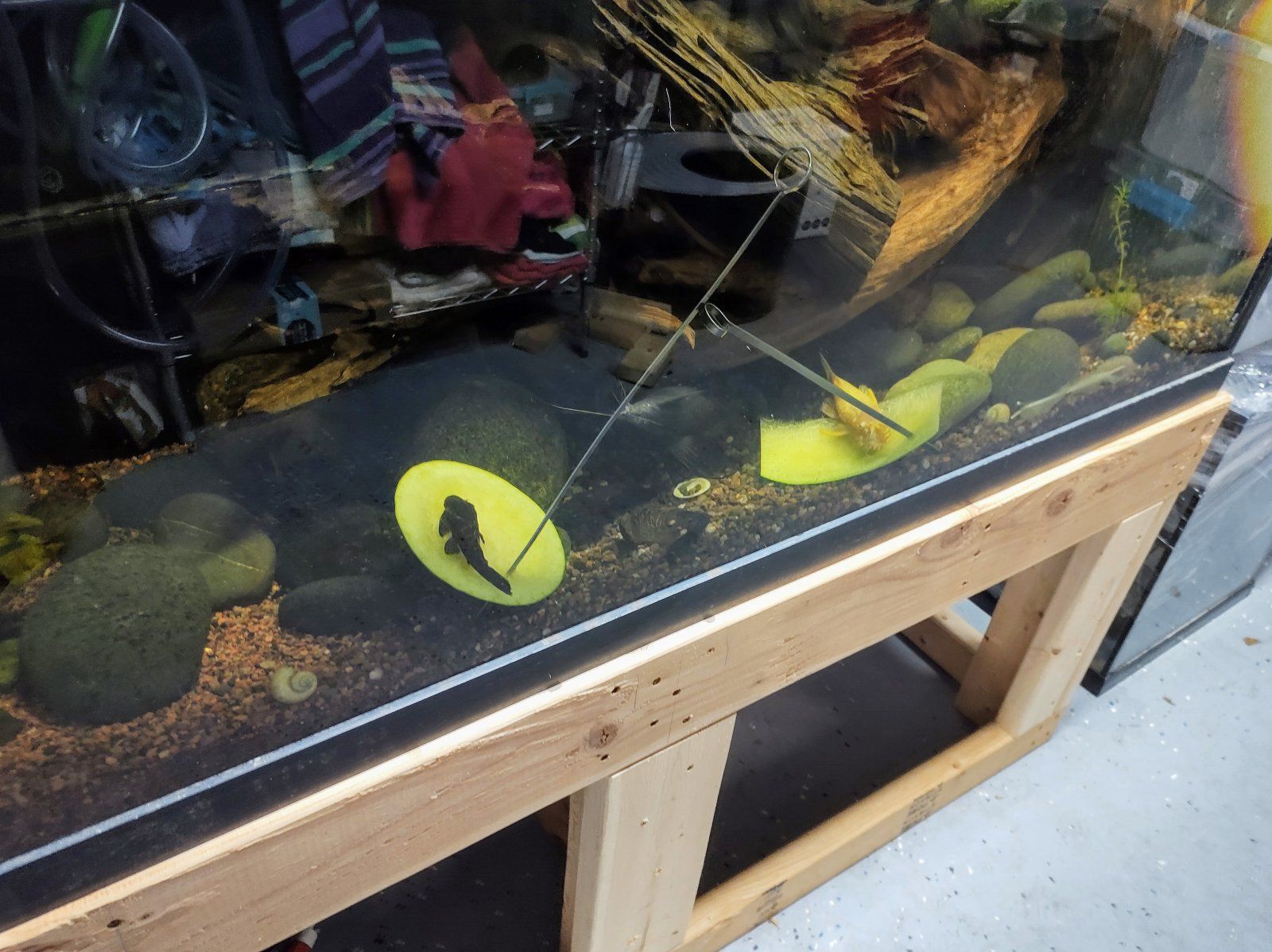 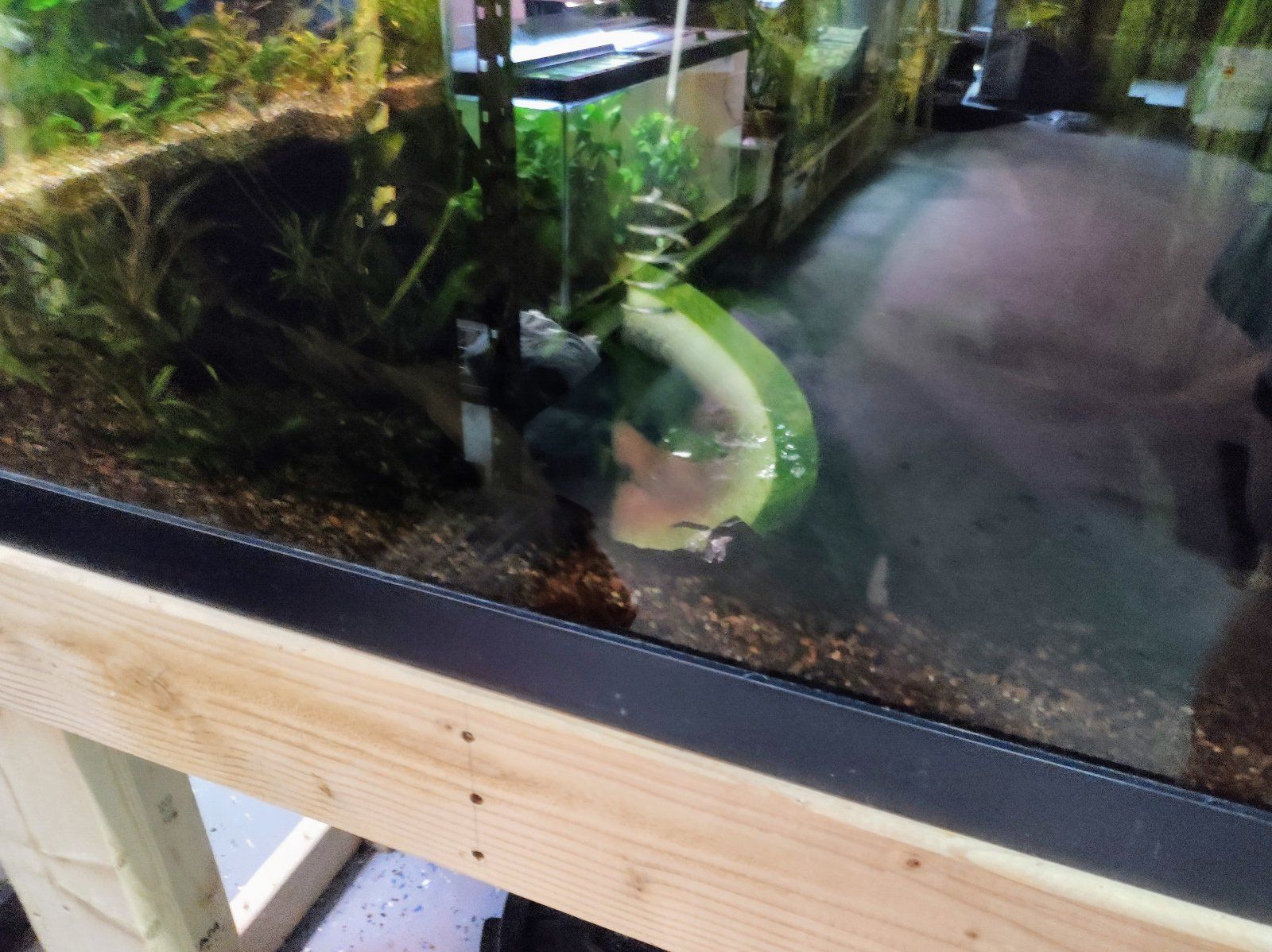 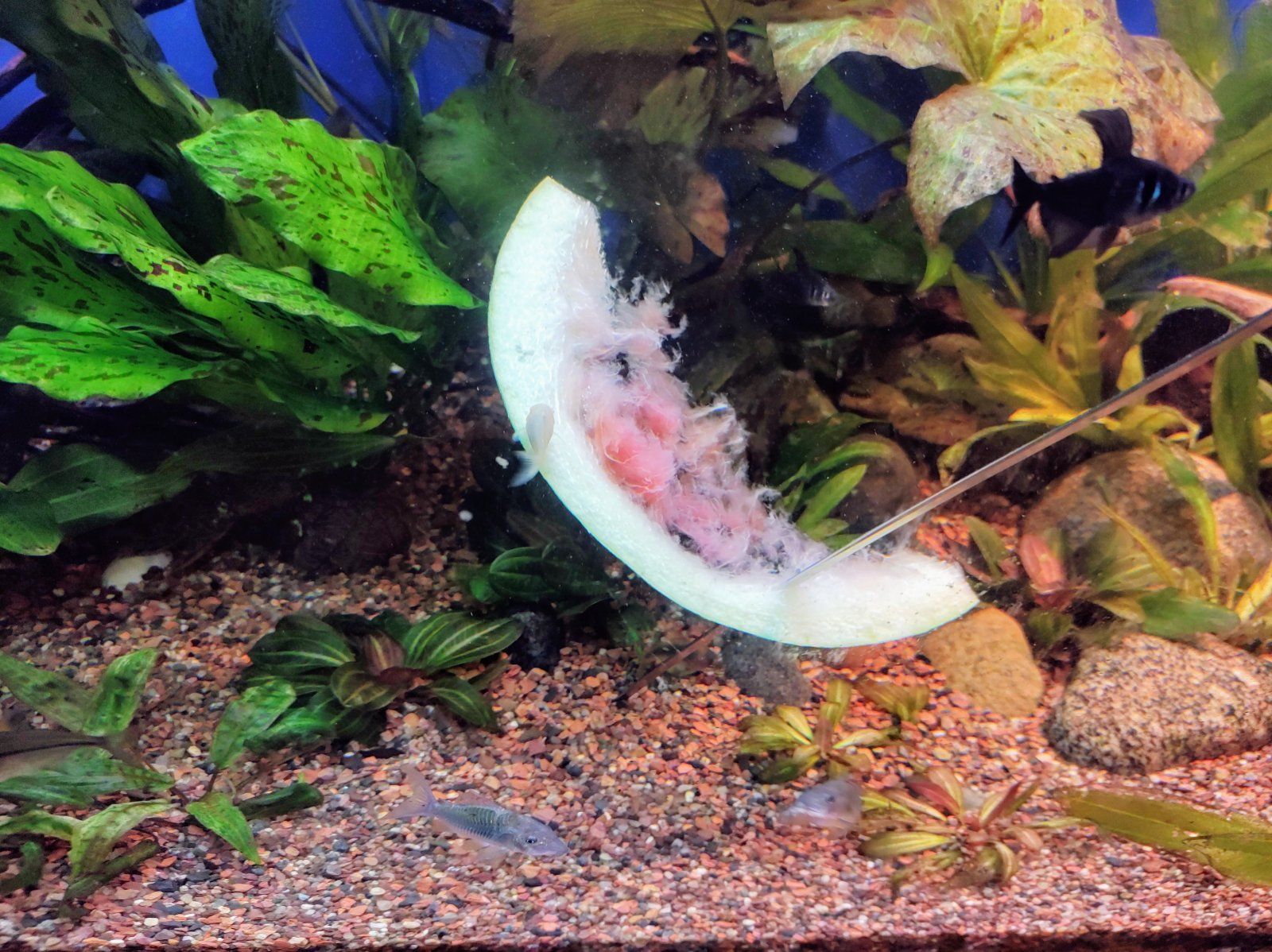 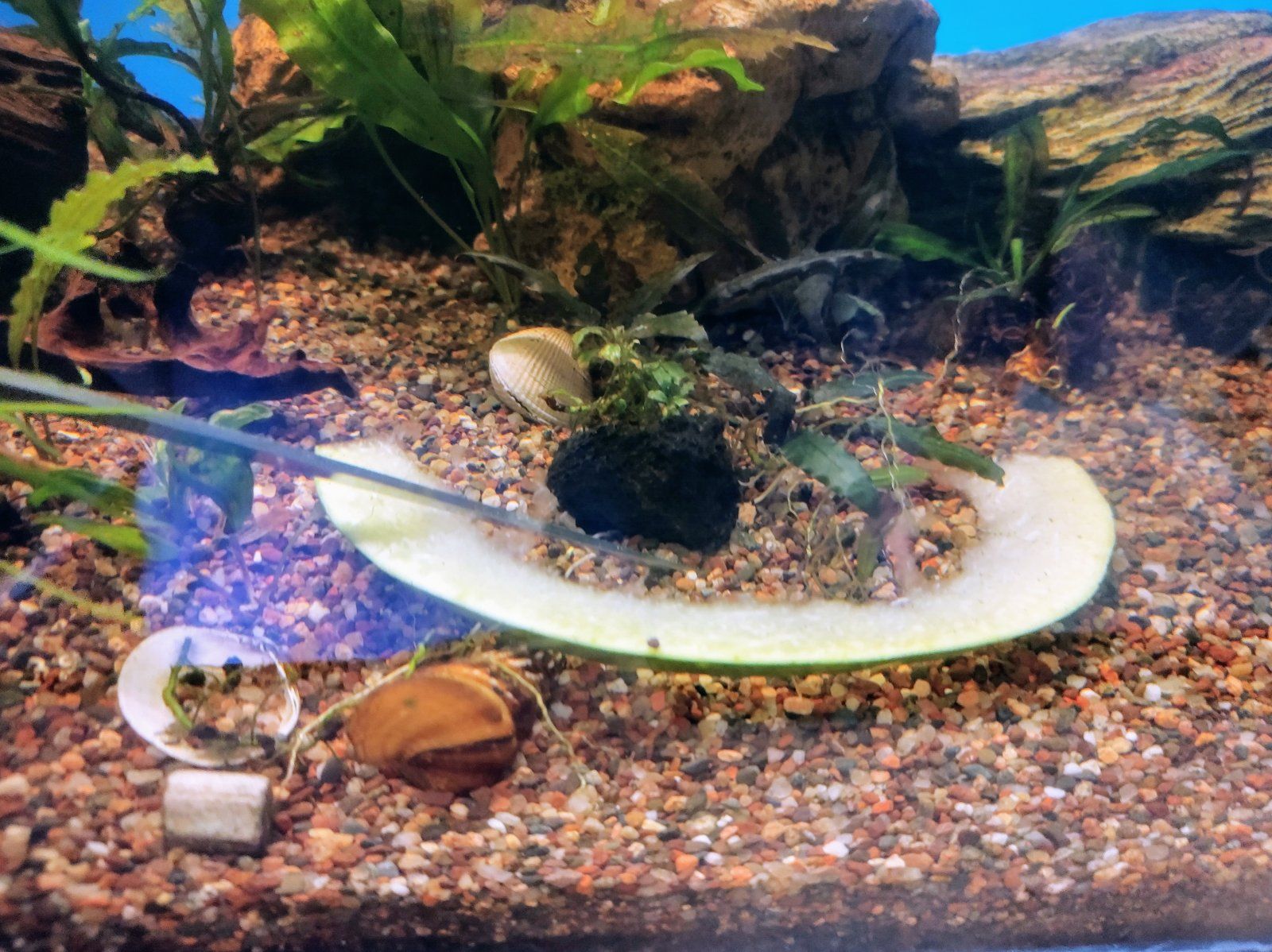 Boundava said:
So its summer time which means watermelons!

How does everyone get their animals to eat fruits and veg? I've tried carrots and yams and they were both barely touched by the shrimps and snail. Do they not like orange?

fish won't touch citrus and it is not good for an aquarium anyway due to the acids in it.

shrimp and snails prefer soft food so raw carrot or sweet potatoe is unlikely to be eaten.
OP
OP

How does everyone get their animals to eat fruits and veg? I've tried carrots and yams and they were both barely touched by the shrimps and snail. Do they not like orange?
Click to expand...

I can get my plecos to eat sweet potatoes either the orange or Asian white varieties. None of my fish like carrots or green beans but I feed them an assortment of melons (honeydew, cantaloupe, watermelon, lemon-drop...), squash (zucchini, yellow squash, opa squash, pumpkin, acorn, carnival, butternut, honeynut, kabocha, hubbard), pepper tops/pieces (orange seems to be my plecos favorite). Mainly the plecos go after the winter squash, sweet potatoes and peppers, but the tetras and corys love the melons and the corys will also nibble on some squash. I will try to buy organic if available, but I will also wash anything I am keeping the skin on with a dilute soap and water-rinsing very well, multiple times to ensure no soapy residues are left. I have been doing this for over a decade with no issues. I feed something fresh a couple times a week.

I also feed my fish shrimp, silver-sides, clams and mussels, all the fish enjoy the protein one or twice a month.

My fish also get repashy (Igapo Explorer, Morning Wood, Grub Pie, Bottom Scratcher and Soilent Green)...I like to spoil them.

So we currently have two 75 gallon tanks, one glass and one acrylic. The glass tank has one large male BN pleco named Gruyere (son of my BN Ghost, and slightly bigger than his dad), an adult male wild blue Acara named Gelato, and a female purple wolf fish named Jelly Bean. Well Jelly Bean has gotten to the size where the 75 is just too small for her. She needs a tank that is wider than the 18" in the 75 gallon. Sis and I have been looking for something suitable (120 gallon or similar footprint) and are leary of glass as we don't want to take a chance of moving something 120 gallon/150 gallon weight-wise out of the car, into the house and down the stairs. After weeks of searching we found the perfect tank and made a nine hour round trip to (near) Indianapolis, IN for an 120 gallon acrylic tank brand new for a phenomenal price. Has an overflow that sis is going to use for filtration, we have lots of pumps and filter media. Going to grab some red flint sand tomorrow at Fish Planet in Deerfield (we were to antsy to get out of the car to stop tonight). Sis is also going to attempt to cut a large terracotta pot in half so that Jelly bean and Gelato have their own hides as they like to fight for resources in the 75.

Hoping to have a garage sale in the next coming weeks, will be selling the 75 gallon with lids and filter as well as a 30 gallon with oak trim and lids along with an assortment of other stuff not fish related. If they don't sell I can see if anyone is interested in the tanks at the fish swap I am going to on August 8th. hoping to have the sale on the 6th and 7th.
OP
OP

So started a small new project in the fish room. I had one 5.5 gallon, added three more and am going to have a small collection of coccina bettas once the tanks have cycled. I have Tropica soil (instead of the ADA) and peat in the tanks for substrate, some small mopani DW pieces I had left over from the wholesale box I bought a couple years ago, and I added some rare crypts (spiralis tiger, nurii and flamingo) as well as a red tiger lotus to each tank and a handful of leaf litter to each tank. They are all filtered individually with a dual sponge filter and have been up for a week. Ever since I got the pair for my 6 gallon I have loved the tiny betta with big attitudes so wanted to add some more. Not going to lie, I hope that I can get them breeding down the road, but that isn't my primary concern. 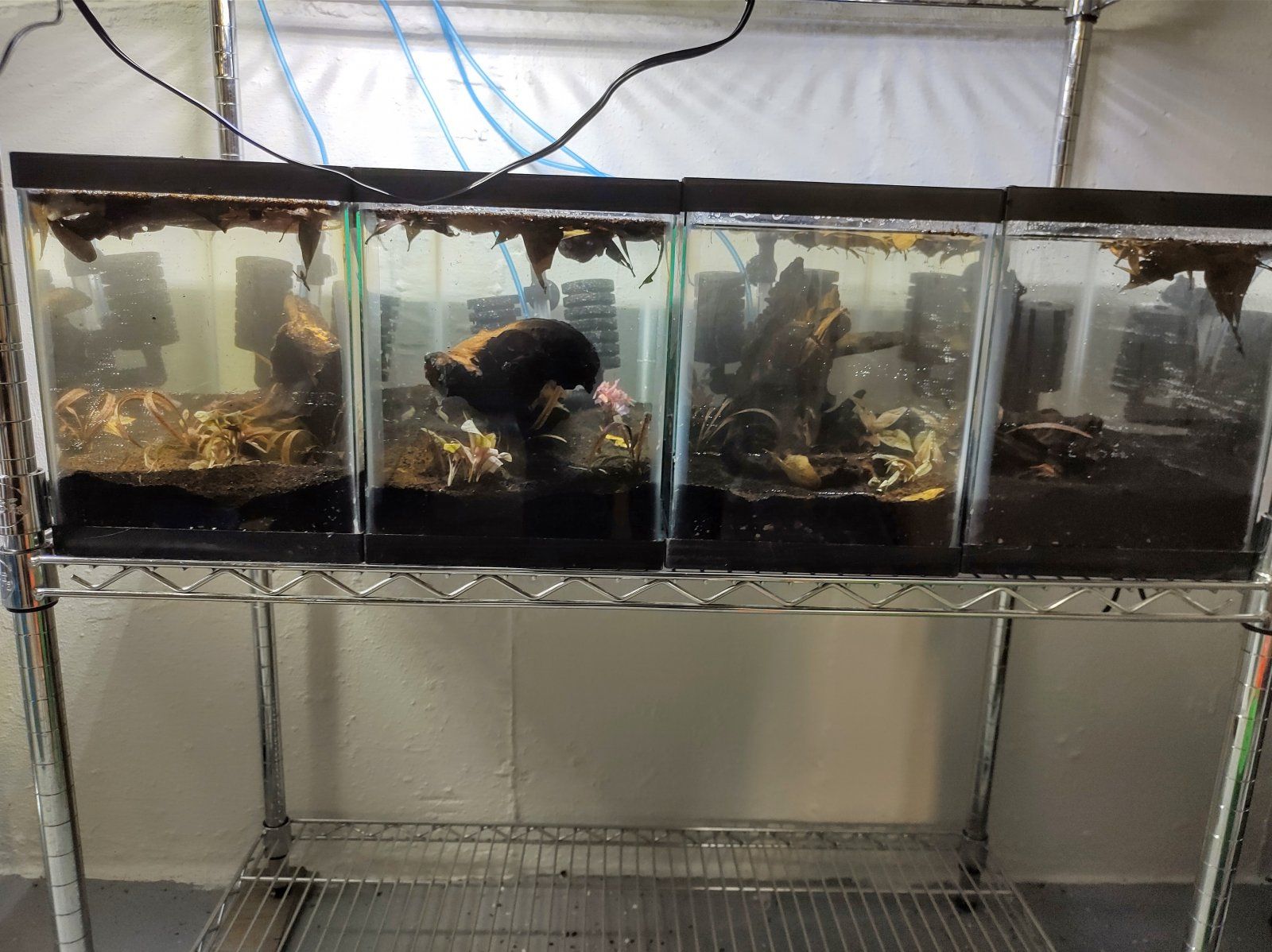 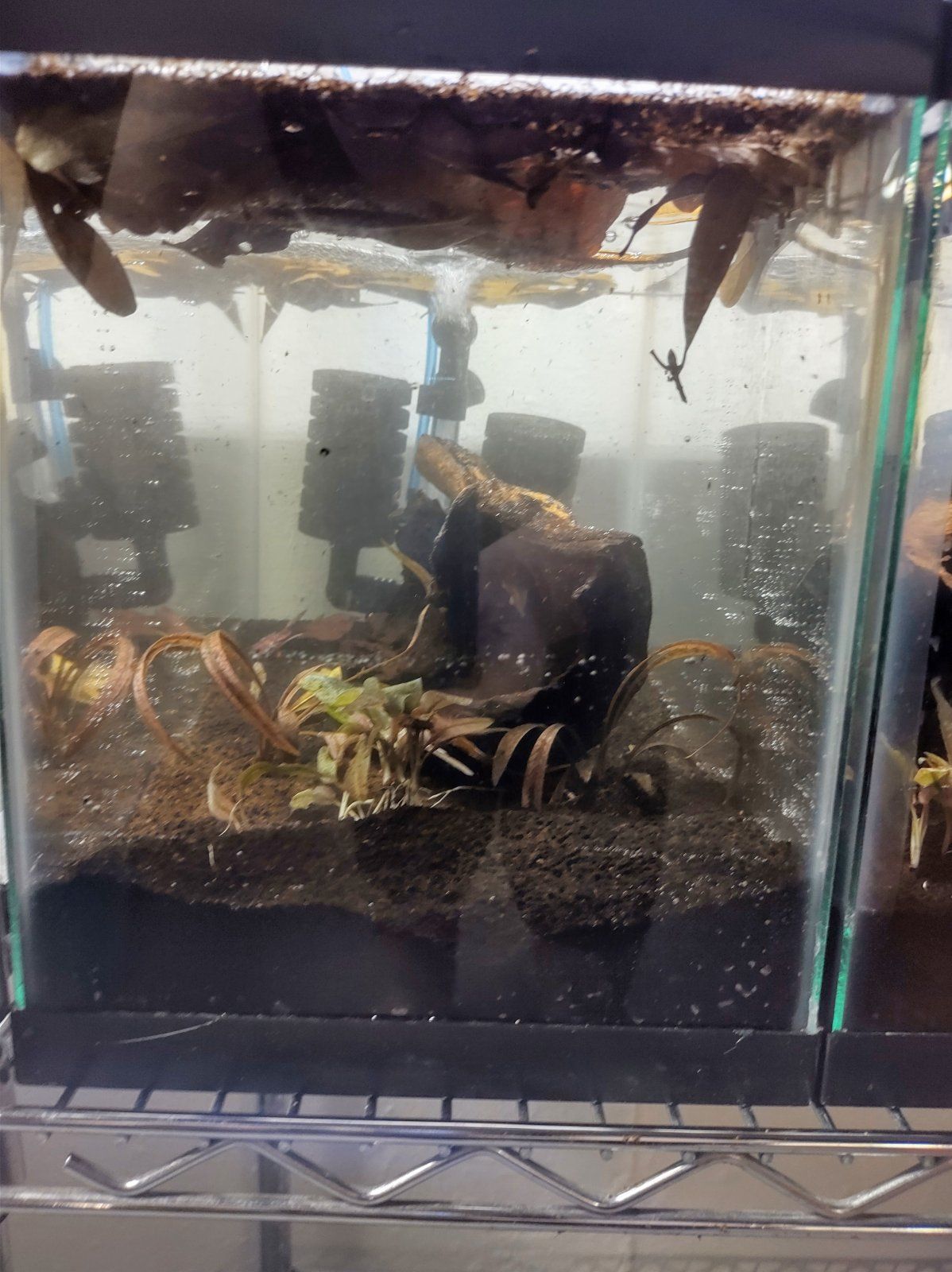 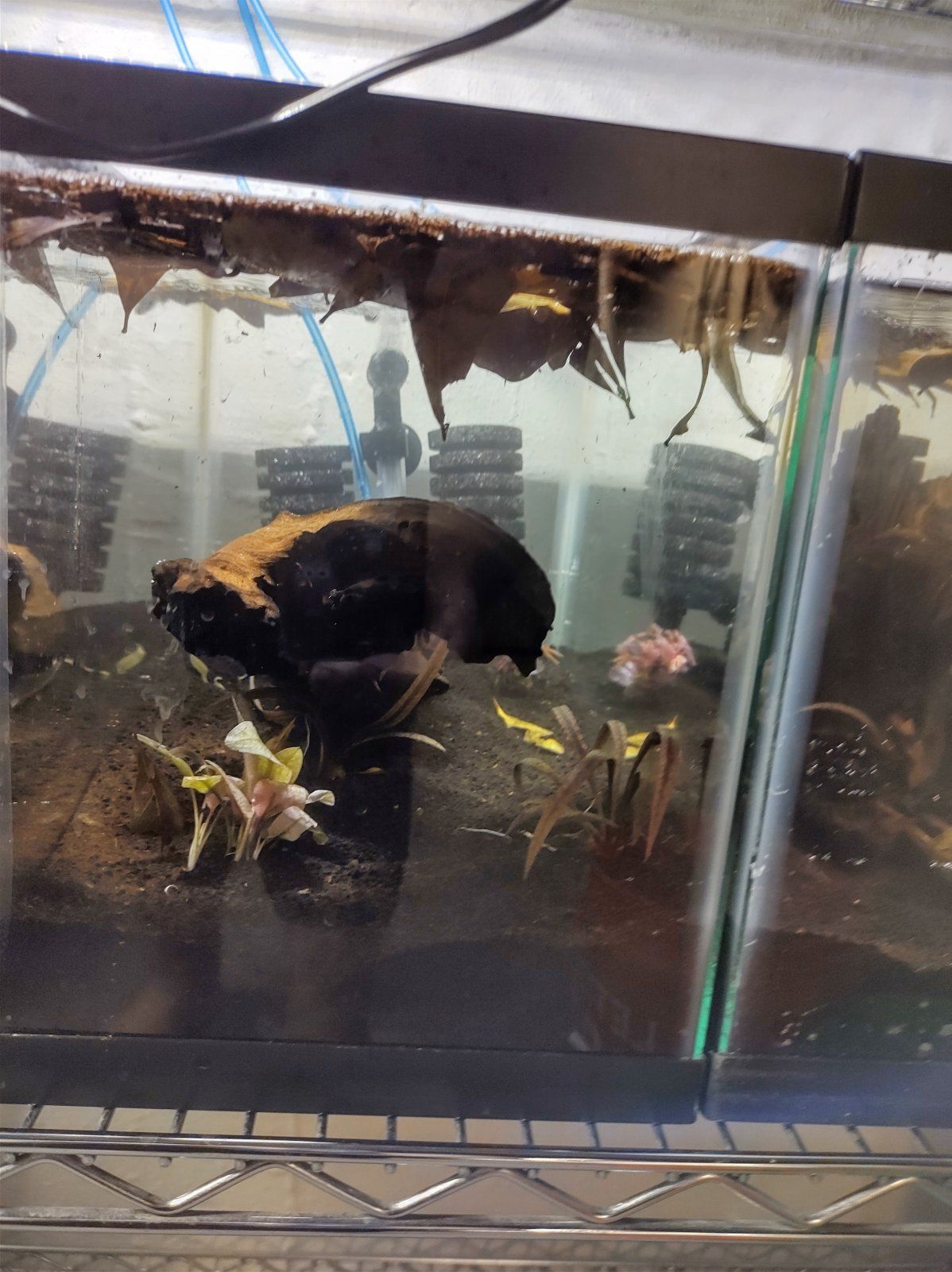 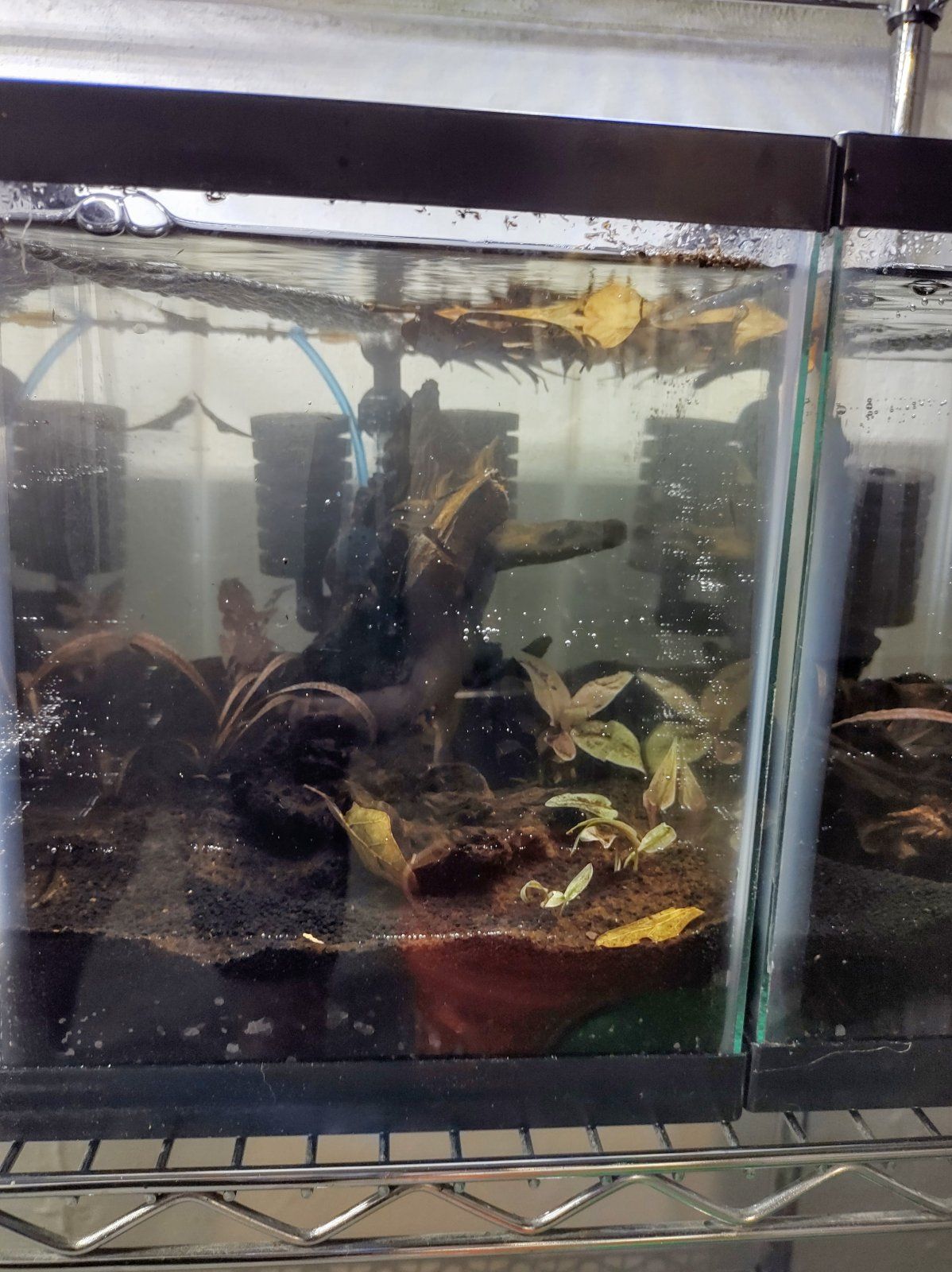 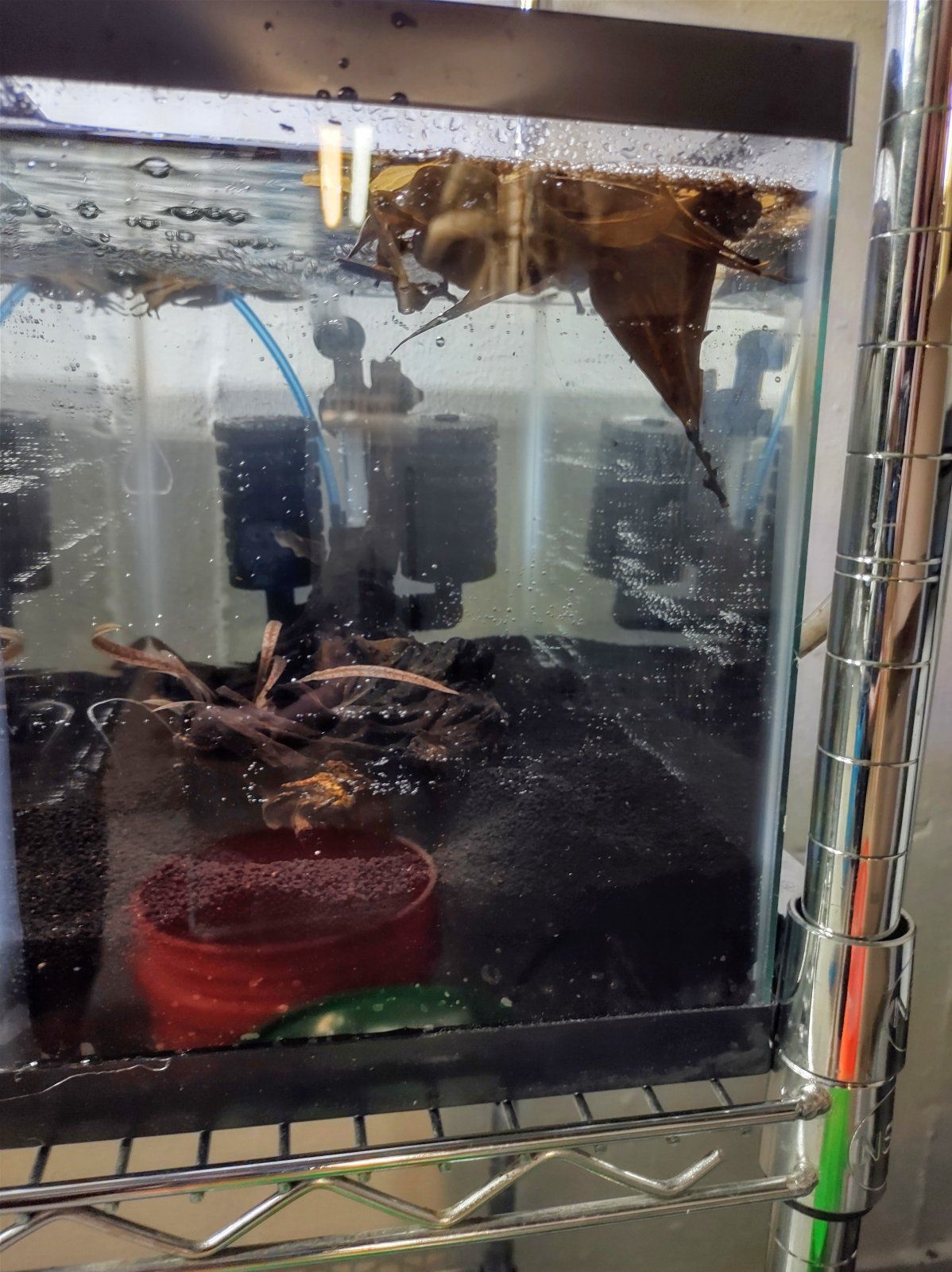 I was originally going to set up 3 so bought plants for three. this tank was waiting for its plants when I took the pics.
OP
OP

@Slaphppy7...Yes Matt more tanks, lol. Also have and acrylic 120 in thew garage, but not an addition. Will be upgrading the glass 75 gallon so that my sisters purple wolf fish has some more room to swim. Did you ever find a taker for your 75 gallon?

Also have (upstairs)
-6 gallon rimless with my miniopinna betta pair and two tiny panda garra that will be growing up in the tank
Last edited: Aug 11, 2021
You must log in or register to reply here.

should i use fertiliser

Art I've Been Doing for Sale