Boundava said:
@Slaphppy7...Yes Matt more tanks, lol. Also have and acrylic 120 in the garage, but not an addition. Will be upgrading the glass 75 gallon so that my sisters purple wolf fish has some more room to swim. Did you ever find a taker for your 75 gallon?

Nope, still have the 75G, wish you were closer, I'd deliver for free...also, leak tested the 2 10G yesterday, no leaks, I was hoping they would so I could trash them, lol....no idea what to do with those, either
OP
OP

Lol to the lfs; Sis and I like our variety of fish.
I'm surprised there are no takers in your area for the 75 gallon. I guess the whole fish hobby craze for covid has passed? I'm having a garage sale this weekend (fun-NOT).
So I will be selling a couple tanks that are ready to sell. The 75 won't be ready to sell but I do have a 30 and a 15 and I think two tens in the garage.

Reminds me, take a look at this pic of the 2 10's, filled....one appears slightly larger than the other, you can see the black trim is wider/larger on one compared to the other...otherwise, the dimensions are almost identical....different brands?

Looks like it, maybe one is Top Fin and the other is Aqueon?

Boundava said:
Looks like it, maybe one is Top Fin and the other is Aqueon?
Click to expand...

That's what I was thinking...important to know, when picking the correct glass lid that will fit

OT, but another member was asking about puffers and feeding snails, have a look when you get a chance, please

Picked up a little Aqueon 5g kit at lunch today ( https://www.aqueon.com/products/aquarium-starter-kits/minibow-smartclean ). Didn't need it, but 60% off because there were 2 scuffs on the side compelled me. So, any suggestions what to do with it? Thinking I might set it up in my office, got...
www.fishforums.net
OP
OP

Do you have a Facebook account? I usually have luck selling tanks off Marketplace. I also used my fish club (pre covid) to move some tanks.

Boundava said:
Do you have a Facebook account? I usually have luck selling tanks off Marketplace. I also used my fish club (pre covid) to move some tanks.
Click to expand...

I don't, Mrs. Slap does, may go that route, thanks....or may even see if the LFS will take them, in exchange for some store credit
OP
OP

Didn't see the post re puffers.
Good idea with lfs, I tried that but they wanted to give me $20 for a 75. I knew I could do better.

Boundava said:
Didn't see the post re puffers.
Good idea with lfs, I tried that but they wanted to give me $20 for a 75. I knew I could do better.
Click to expand...

That's probably more than mine would offer me, lol
OP
OP

I did wind up selling the two 15 gallons and the 30 gallon. Still have a 50 gallon low boy in the basement and will have two 75 gallons to sell-one is empty and the other is going to be empty as soon as Sis breaks upgrades it to the 120 acrylic we bough a few weeks ago. I set up a shelf with four 5.5 gallon tanks for some beta. I made some custom lids for them out of the inside corners and glass pieces I ordered, was a lot cheaper than buying 4 of the Aqueon lids and it works a lot better as I have then all sitting the short way on one shelf so these lids can slide across the tank giving me lots of room to access the tanks. I also broke down my 15 gallon rabbit snail tank, moved them into my sister's 12 gallon rimless shellie tank and set the 15 gallon up for either a group of chocolate gouramis or a pair/three licorice gouramis I been MIA for a bit, got a new job and finishing some projects around the house while the weather permits. I got a pair of hendra and burdigala, looking to get the brownrum and uberis when they are in stock, Also want to add a pair of Mahachaiensis to my brackish tank when they are back in stock.

I have been busy with a new job and finishing up some (of the many) projects around the house while and when I can. Don't have any picks or videos right now.

Spent today driving up to Door County Wisconsin (and back home). Got some smoked whitefish from Lake Michigan and some smoked Atlantic salmon at Charlie's Smokehouse, bought some fresh apples and jams from a new farm style market place. Looked at all of the new residential condos/apartment and homes that have gone up in the 4 years since I had been there

, Al Johnson's now has a whole new restaurant that is twice the size of their original, still with a grass roof for the goats! Plus there is now a Target at the base of Door County, sacrebleu! 😲

Sis treated me to lunch and then we sat at the docks and watched some fish in the harbor. It was a nice day. ☀️

Al Johnson's old building with the goats, and the new one right behind it with the greener grass not grazed by goats, lol. 🐐 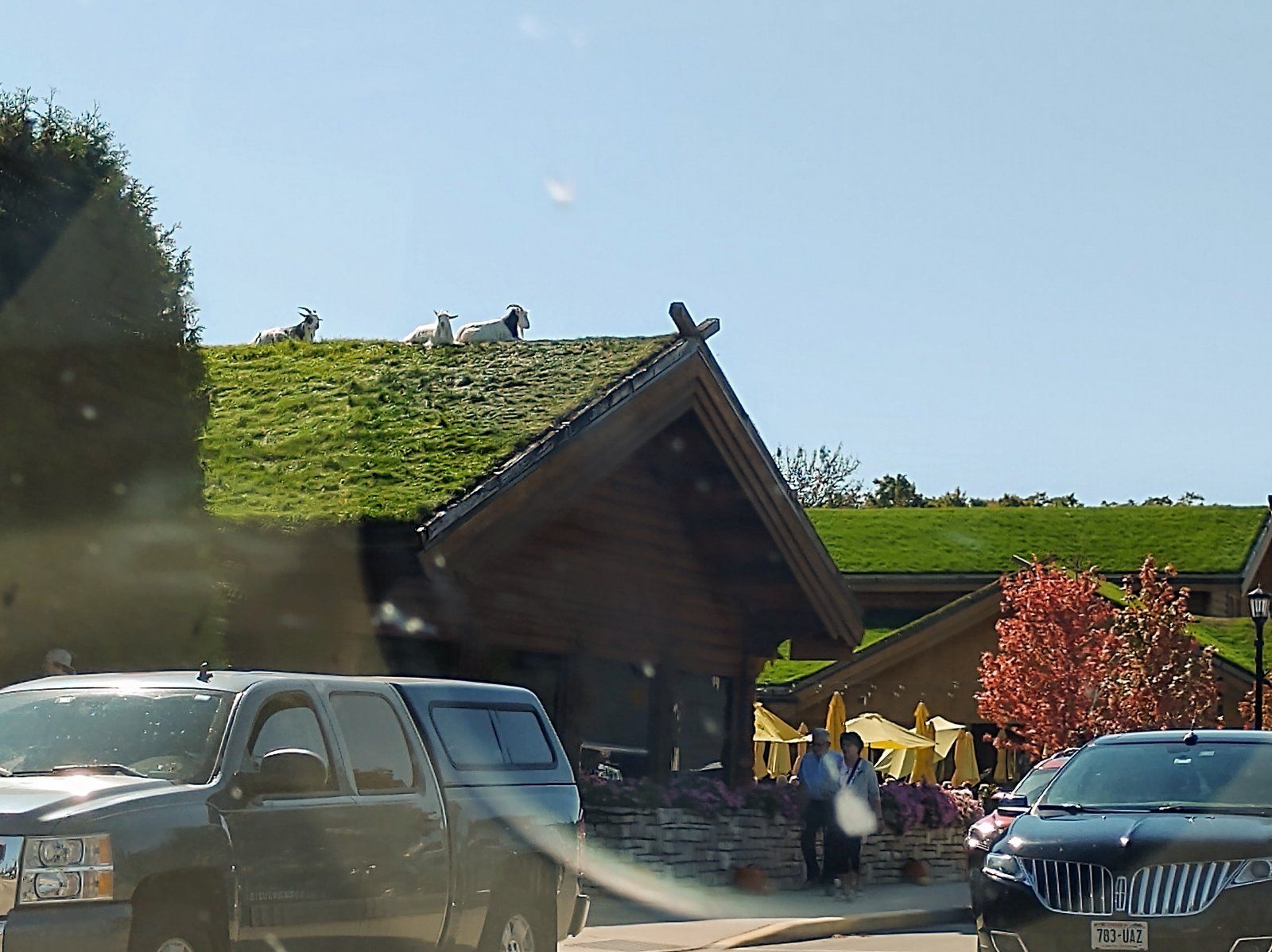 Our seat for lunch and the harbor we sat at after lunch. ⛵ 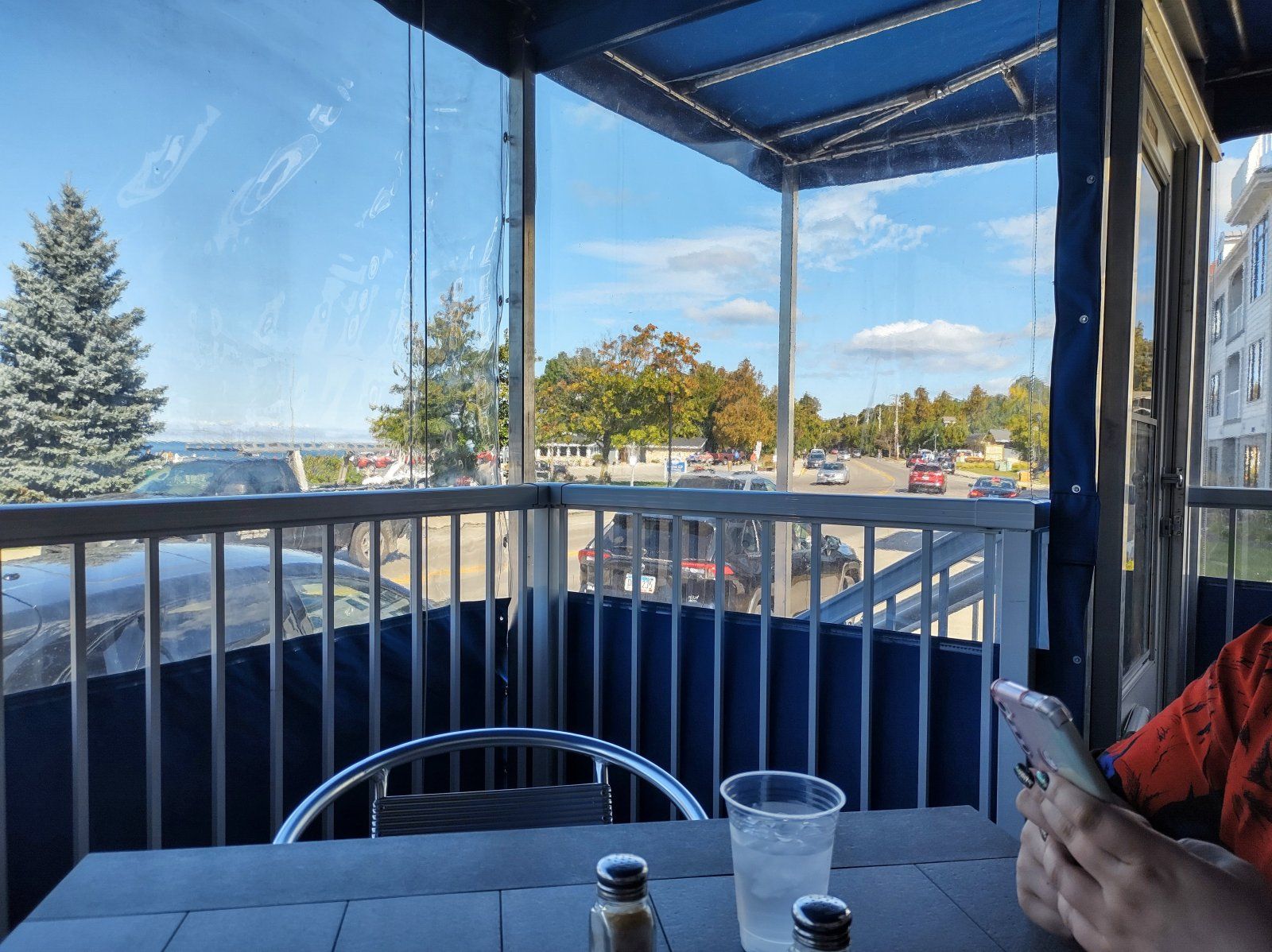 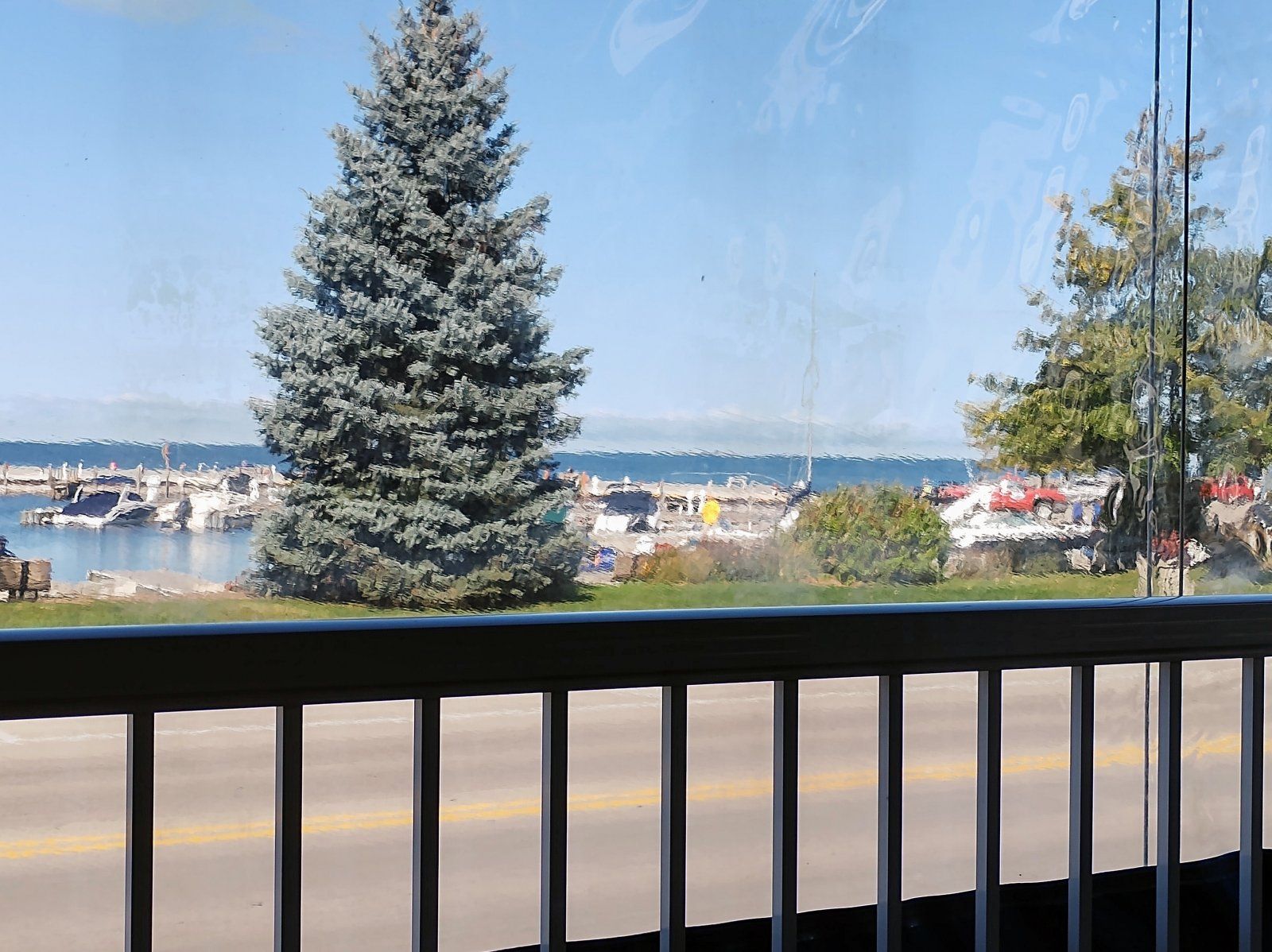 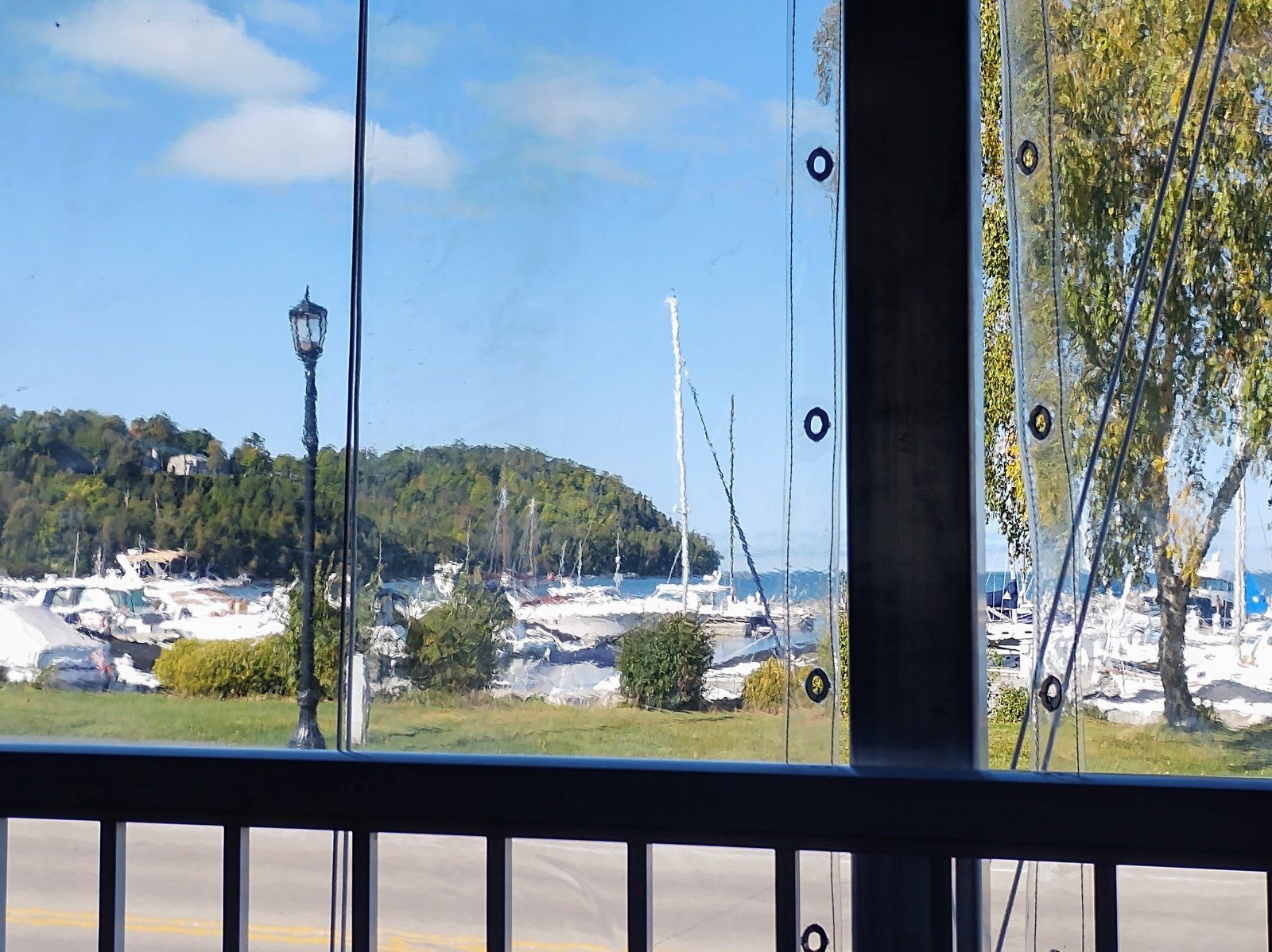 Yummy! It was the special of the day. 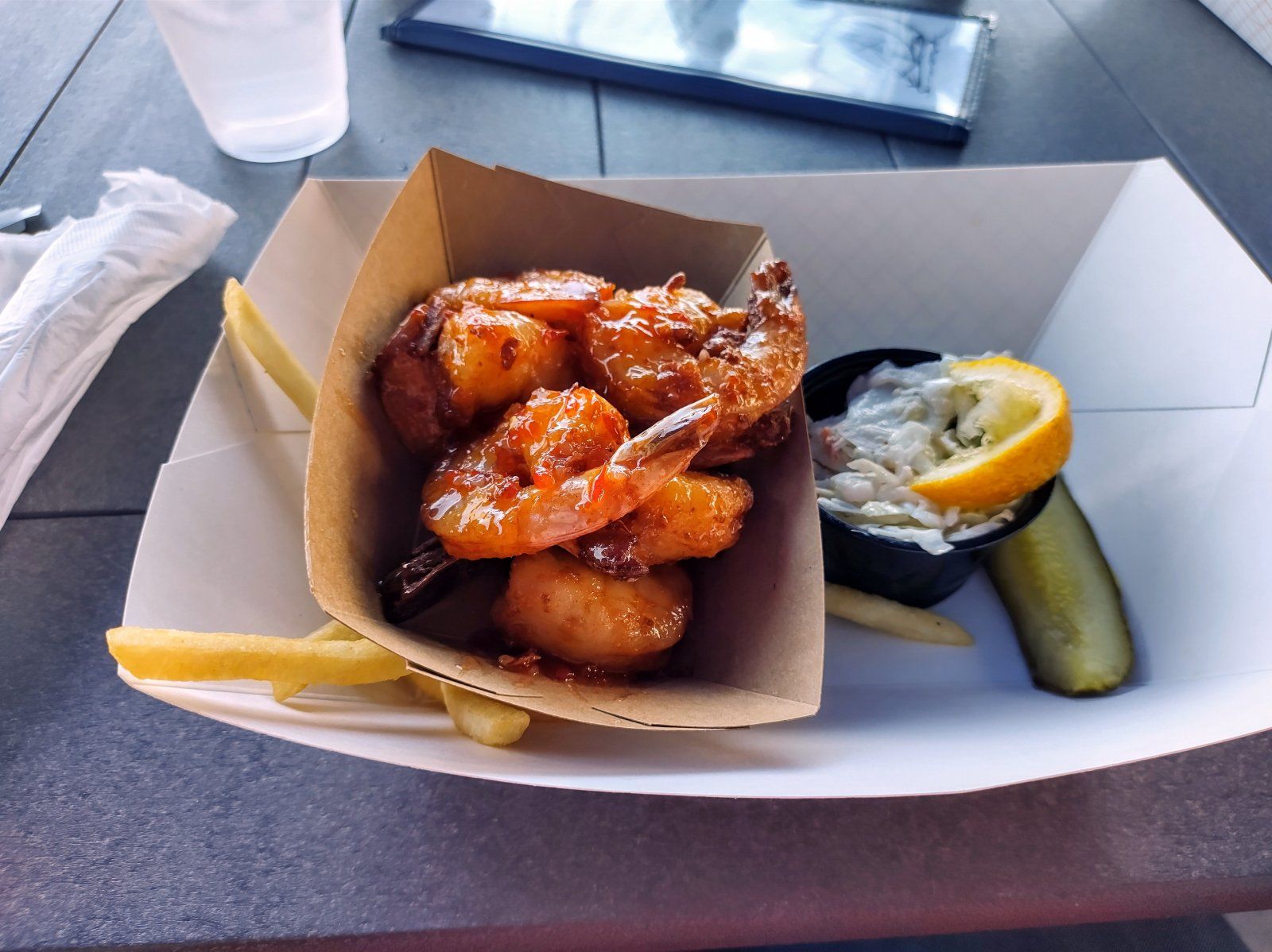 Though we are almost in WI, Door County is in northern WI on the peninsula which is slightly over 4 hour drive. It was a nice day-cation and if I didn't have work tomorrow I would have spent the night at one of the many inns and taken a boat ride, taken in more of the scenery and found a fish boil. Always can go back for my birthday in October, weather permitting.
Last edited: Sep 28, 2021

Nice to hear from you, Nat. Been a while.

Hi Nat, agree with Thomas, thanks for the update...hope the new job works out fine for you.
OP
OP

Well it's been another while.
Work is working out to be ok, wish the pay was a bit more, but it's ok. Took a video update of the fish room, but it tuned out to be two parts.