Betta Fish Hanging Out at Bottom of Tank & Breathing Heavy

I have not included other water parameters because I do not own a master test kit. However, if these parameters are critical to diagnosing my fish's condition, I would be more than happy to purchase a test kit from my local pet store.

I purchased my betta fish a couple of months ago at a local pet store. For a while, he acted like a regular, spunky betta. He would explore the tank almost 24/7. I never had any issues feeding him, either. He would happily swim to the surface for three pellets in the morning & another three at night. However, about a week ago, he began to stop eating. For example, I could get him to eat in the morning but not at night, or vice versa. I also noticed him producing lots of bubbles, but not the kind that would accumulate to form a bubble nest. It looked like he would expel about a dozen bubbles at once, along with a few clicking sounds. After a few days of a declining appetite, his appetite vanished. I would offer food, but he would not even acknowledge that it was there. At this point, I noticed that something was significantly off. He laid on the rocks at the bottom of the tank, breathing very heavily. His mouth also opens & closes when he does this, but I assume that's due to the heavy breathing. I decided to contact my local pet store to ask for their suggestion. The person that I spoke to suggested swim bladder disease. Upon research, I determined that one symptom of this disease was buoyancy problems. Here's what's odd, I don't think my betta has any buoyancy problems. He will swim rapidly to the top of the tank for a gasp of air about every half an hour. Occasionally, following the gasp of air, he'll even do a few laps around the tank. However, this never lasts more than a minute. He always returns to the bottom of the tank, breathing heavily. He almost always settles on the rocks bottom side down, but I have noticed him laying upside down as well. He doesn't look sickly either. While his symptoms do appear consistent with those of swim bladder disease, I am perplexed as to why he is coming up for gasps of air.

Here's what I've tried:
*Performing a 100% water change
*Installing a heater
*Fasting, although he probably wouldn't eat anyway
*A few doses of API Stress Coat+ without a water change

Here is a short video displaying his symptoms, including one of his gasps for air. I would greatly appreciate any help you all could provide!

1) How long have you had the betta?

I personally do not think it is swim bladder disease. However;

2) Are his gills red or slimy?

3) When you perform water changes, do you clean the bottom of the tank or do you only take 10% of the top out (which I would do at least 25% weekly.

It doesn't seem like swim bladder disease to me either. I would get a test kit and test for ammonia, nitrite, and nitrate and see if those levels are healthy. I would also increase your water changes and vacuum the gravel and make sure you add dechlorinator. By the way, my understanding is that a 100% water change is not recommended because you need to retain some beneficial bacteria. I wouldn't go over 75% per water change, but you can do a daily change for a few weeks to make sure there isn't any problem with the water.
OP
OP

Thanks for the replies! Sorry for my late response; I went out to get a test kit. Here are the water parameters:

To answer a few questions, I've had him for coming up on three months now. He was thriving up until now. His gills don't appear to be red or slimy at the moment. However, I did notice slime on his coat. Whoops, I don't clean the bottom of the tank during the weekly changes; I only replace 10% from the top. However, I did clean out the entire tank during the recent 100% change.

Here is a photo of the slime on his coat: 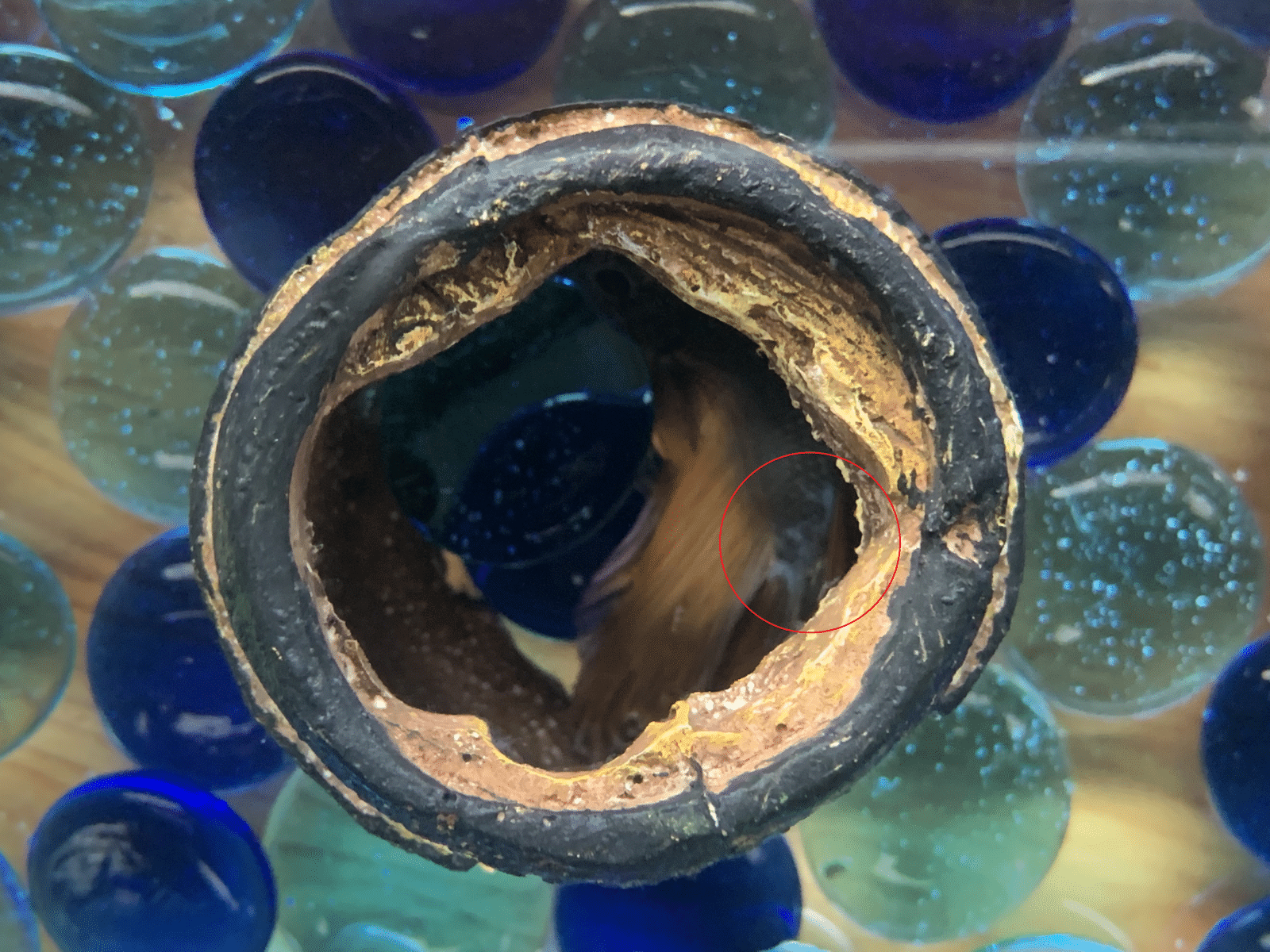 Not the best picture, but he's hiding out in a barrel at the moment. Thanks again for any insight.

As for the Ammonia, that is incredibly high And could be why he is acting like that... Perform 80% water changes every other day until the ammonia stabilizes, making sure to clean the substrate.

Do you use any water conditioners. Use “prime” And follow the instructions.

Yes, I would do a 75% water change every day even until your ammonia is at zero. I'm not sure which water testing kit you're using but I find the API Water Testing kit to be pretty accurate and easy to use. Make sure you're dechlorinating and making sure the water temperature is equivalent when doing water changes. The PH could be a concern if that's accurate; seems quite acidic.

SpotiKona said:
Whoops, I don't clean the bottom of the tank during the weekly changes; I only replace 10% from the top
Click to expand...

Weekly water changes should be 50% or more. Using a siphon means you can clean the substrate at the same time as removing old water.
OP
OP

Thanks for all the suggestions! I did measure the pH again last night. It still read 6.0. However, after the 80% water change, pH increased to 6.8. Ammonia levels have also improved today; the new reading is about 0.25 parts per million. I will continue to change his water daily until the reading stabilizes at zero. Any thoughts about the slime on his coat? It does seem a bit better after the water change. To answer a few questions, I am using API Stress Coat+ to condition the water after changes. To test the water, I am using the API Freshwater Master Test Kit. I'm a bit worried though as he's still at the bottom of the tank breathing heavily & not interested in any food.

I think the best thing you can do at this point is daily water changes until ammonia stabilizes at zero and hope he recovers.

A 2 gallon tank is really too small for a betta long term. They should be in a 5 gallon at least. Smaller tanks are actually harder to maintain in some ways, the most important being that even small changes in water chemistry make a bigger impact on the fish. Think about it...a few drops in a 2 gallon tank is a lot more, percentage-wsie, than a few drops in a tank with more than twice the water volume. If something is even a little off in a small tank, it will harm the fish.

If I were you, I would try to get him a larger tank if possible, and purchase live plants. Live plants use ammonia as food - so they will absorb ammonia out of the water before it has a chance to harm your fish. Even if you have to keep his current tank for whatever reason, adding live plants will help significantly.

You want your ammonia levels to be 0, always - if they aren't 0, you need to do a 75% water change. Test your water daily until you consistently test at 0ppm for ammonia and nitrites. Nitrates are acceptable, however I like to keep mine under 20ppm. As others have said, when you are performing your weekly tank maintenance, make sure you are using a siphon and cleaning the substrate. If you have gravel you will need to dig around in it. If you have sand you can simply hoover debris off the top. For a small tank like that you should be changing 50% weekly, which really should be a quick chore. And it is crucial that you match the temperature the best you can. If you take out a gallon and replace it with colder or hotter water, it will make a big impact.
OP
OP

I appreciate the feedback! As per my latest reading, pH is now neutral & ammonia level is zero. Unfortunately, he's still not interested in food. Interestingly enough, he's hanging out at the top of the tank now, resting on the heater. I take it he's enjoying the warmth I know I've only had him for a few months but is there a possibility he's just an old fish?

SpotiKona said:
I appreciate the feedback! As per my latest reading, pH is now neutral & ammonia level is zero. Unfortunately, he's still not interested in food. Interestingly enough, he's hanging out at the top of the tank now, resting on the heater. I take it he's enjoying the warmth I know I've only had him for a few months but is there a possibility he's just an old fish?
Click to expand...

I mean, anything's possible, but I think it's far more likely he's been stressed and possibly internally damaged from the high levels of ammonia in the tank. It's a common beginner mistake to make, so don't feel too bad. Most pet stores will tell you it's fine to just buy a fish and put it into the tank right away or after waiting a couple days. And many people just don't know any better than that. I didn't at one point, either, and neither did many of us here on this forum.

Good job getting your water nice and clean for him. Hopefully he will recover. Make sure you continue to test daily until things stabilize for at least several days in a row, and change water as needed. Good luck!
OP
OP

I hope he recovers too. Thank you for all the help!

It is hard to maintain a cycle in a small tank too. Please consider getting him a 10 gallon tank.
OP
OP

I will look into getting him a larger tank. Thanks for the recommendations!
You must log in or register to reply here.

Half Banded Spiny Eel hungry all the time?