A Retirement Home For Bob

Hi all, this is the recent journey of Bob, my old Siamese Fighter and his move to his retirement home.

Bob originally came to me after I picked up an old tank for £1 at a car boot in the South and then spent about £60 kitting it out!  When I first got him all his fins had been ripped off by the two females he had been sharing a tank with (warning to those thinking the girls will live with the boys!).  I had seen him a few times prior to this though, and liked his personality so took him anyway, complete with stubs as fins.  These eventually grew and he was a stunner.

I then moved north, so bought a food grade box with lid, and he traveled with me in the car to his/my new home.  It was from here that I was destined to suffer from *MTS!  Sometime later on a bike ride out to a Garden Centre to purchase a plant for the garden, I happened to go and take a look at the Fish Section!  I came home with a new fish tank (well it was delivered for me) and no plant for the garden!  The rest is history and is in my profile... 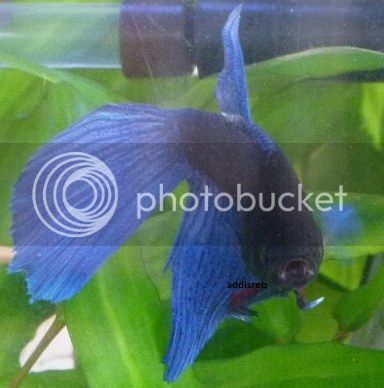 So back to Bob, he has lived in his new tank for almost two years now and would be estimated between 3-4 y/o.  He comes up for his food and at times even jumps for it, but most of the time sits on the bottom of the tank.  He is prone to fin-rot and fin-melt, no matter how much maintenance I seem to do.

Bob sitting on the bottom of his tank 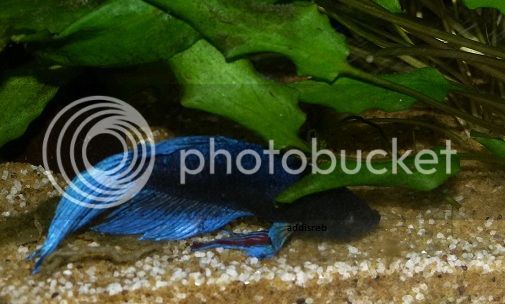 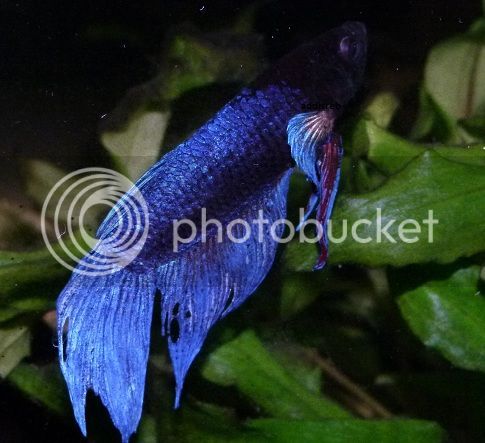 So the idea came to give him his own retirement home where he can while away his days, and I can treat him to his own special needs.

Firstly, I wanted a tunnel or log for him to settle in, so he was not always sitting on the bottom of the tank, so began a discussion on Betta Log or Small Floating Log to gain others experiences.

I then went and bought a few potential items based on Wildbettas (thanks) ideas in the above topic: 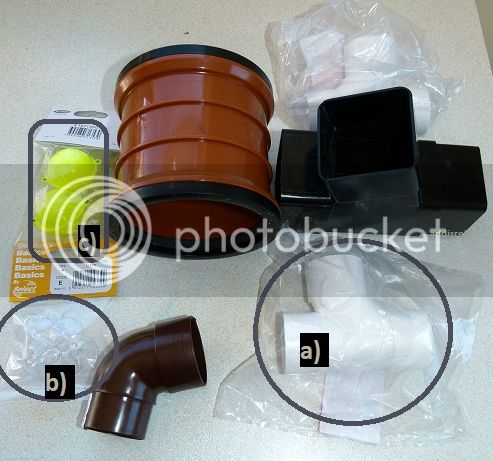 I used items a, b and c:
a) was a plumbing pipe with a hole in the middle so that Bob could breathe without having to exit the pipe.
b) were suckers with hooks to attach to the outside of the aquarium to hold the log in place.
c) fishing floats ( I have since found some clear ones for future use)

I also used fishing line to fasten c to a and then to b.

The completed log, the first image has a temperature probe inside it so that I could monitor that it would maintain the required temperature. 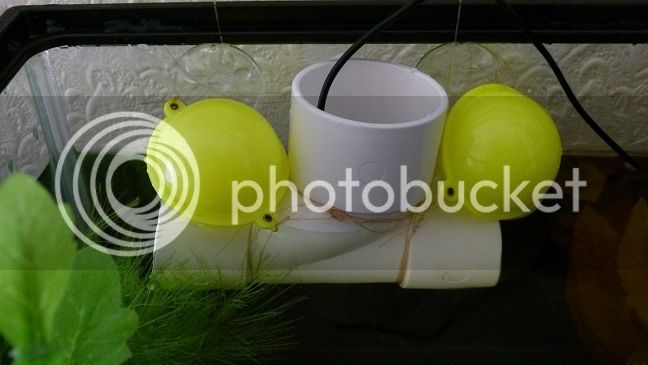 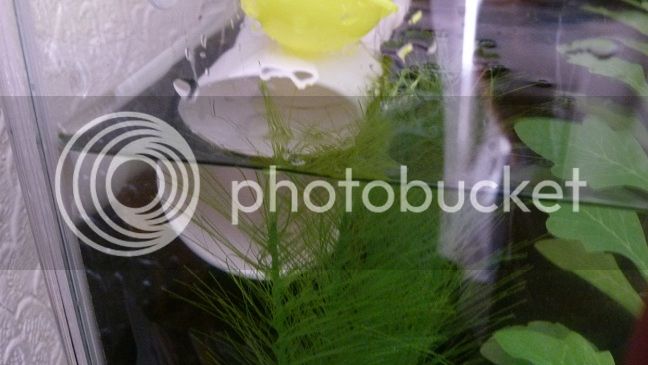 To be continued ...
(as the TFF will not allow me to post more images!)

What a lovely specimen Bob is! Can't wait to see the rest of this journey!
OP

Next, I wanted the water to be just right, so asked if anyone had used the Betta Spa product.
(I do use Indian Almond Leaves and Alder Cones but felt Bob needed more)

The plan was for Bob to have a tank without substrate, to protect his delicate fins, and for ease of regular cleaning.

Filter process for Bob, a gentle flow in his old age 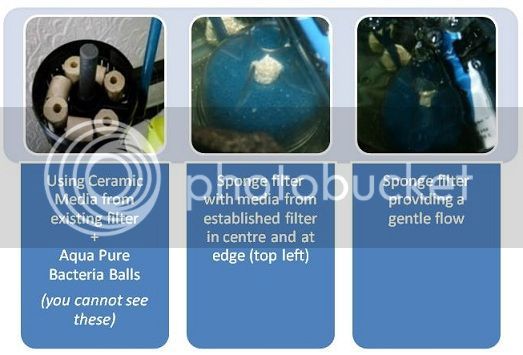 Acclimatisation
The water was primarily from his existing tank with some new de-chlorinated water.  At this stage the Betta Spa has not been added, so that Bob can adjust to his new surroundings prior to any further changes. 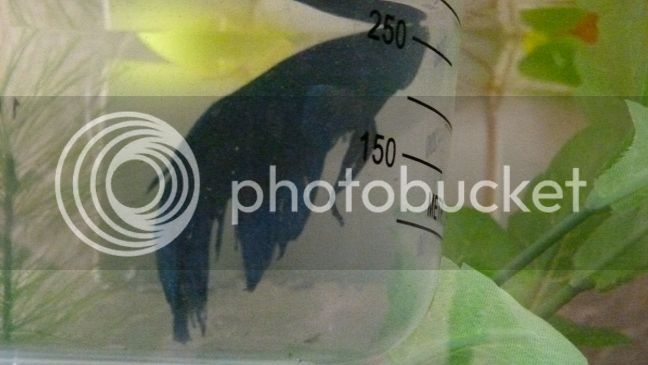 So here he is, Bob, in his retirement home, with all he wants at his command. 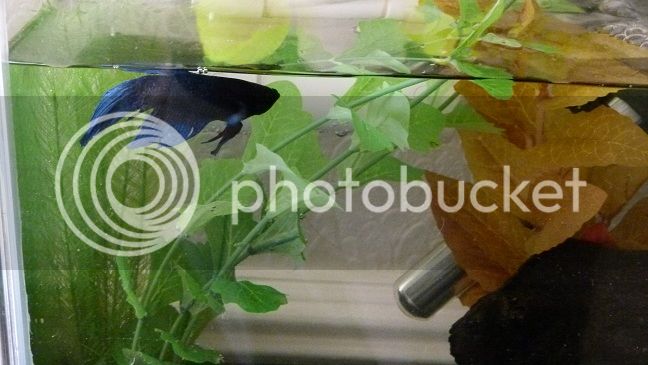 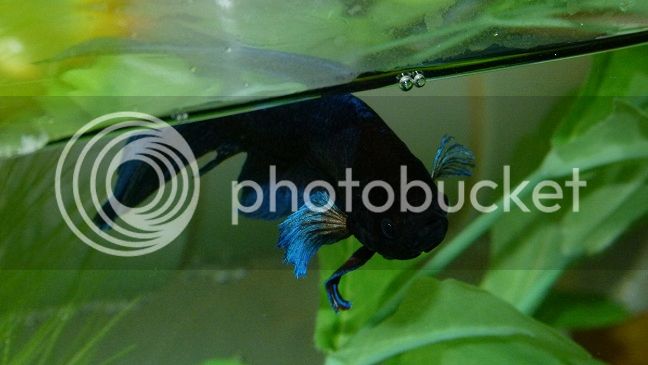 Bob in the evening 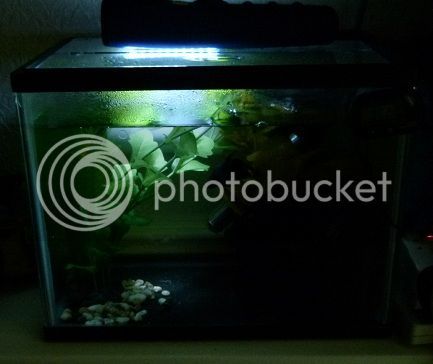 Bob has been seen a couple of times coming out of the pipe, he also chills in the plant nearby, and at times is seen under the Almond Leaf asleep at the bottom.  Generally though, he is chilling in the plants so it appears he does not want to sit on the bottom, objective therefore achieved.  The tank itself sits on a unit at the end of the hall.  He was originally in the kitchen but alas I had no room for any more tanks in there!  The hallway still provides him with regular visitors, maybe a little less than in the kitchen, but seems to suit him as he comes to greet me when I walk past.

I hope this is useful to those of us with old Bettas who want to know how to keep them going.  Hopefully I have done the best for Bob.

In respect to his name, I never used to name my fish, then my brother decided he needed a name, as he just bobbed about it was decided to call him Bob, and yes, now all my Betta Boys (and some girls) have names!  Mind you it is easier to say "Bob's tank" etc, than "the tank at the end of the hall" etc.

Hope you enjoy this topic.  Any further hints and tips welcome.

* MTS = Multiple Tank Syndrome
NB: I have suffered from MTS before many years ago, so this is purely a more recent return to the hobby.

Brilliant job RCA, and you're right, he is just like Vader!

P.s haven't forgotten about the link, still waiting to catch hubby before he gets home from work, collapses on sofa and sleeps lol x
OP

Thanks Shelster, without Mamashack posting I could not have continued it for you all, due to the amount of images!
I know we all like pics though

Bob is indeed very like your new boy, he is my only VT (Veil-tail) and I will now mainly stick to Plakats, although I am pending a BE Butterfly Lavender Half-moon to go with my stunning girl, pictures 1 & 2 here (did not want to post her images in here and take the focus away from Bob).

Bob is lovely it's great to see people taking such good care of their fish.  I hope he enjoys his retirement, sounds like he deserves it!

It's so sweet youre taking the trouble to make sure bob lives out his "twilight years" in luxury.

I take my fish for walks

Great work! I'm glad to see you're taking extra care of him

The "shortly saying hi after release" photo is a classic, he actually looks like an old man... a happy old man though!

His tank strangely looks quite good to, it's simple but appealing with the little pebbles leading to the plant
OP

Thanks for all your lovely comments, as you say Bob deserves a rest in his old age.

The "shortly saying hi after release" photo is a classic, he actually looks like an old man... a happy old man though!

His tank strangely looks quite good to, it's simple but appealing with the little pebbles leading to the plant

I think if he had wrinkles you would see them

Thanks re: his tank, I like the use of the words "strangely looks quite good to...",  it is simple for ease of maintenance but glad you like it.  Here is another picture which I deleted earlier in order for the Topic to be created.  You will see he also has a piece of bogwood protecting him from the slight bubbling of the filter, as well as releasing tannins along with the IAL for his old bones 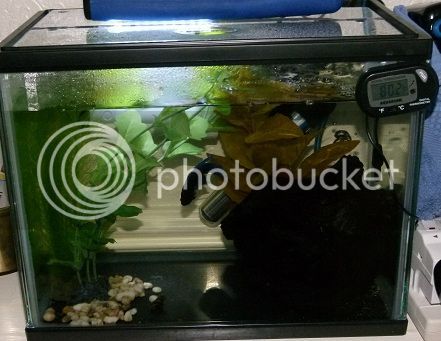 I love it!!  It looks great!  I am glad to see that Bob is enjoying the retirement home.  I never thought of using fishing floats to help the pipe float.  Very creative!
OP

glad you all approve of his new home

I also keep the water level lower than normal so that his "pipe/tunnel" works for him i.e. he can breathe whilst inside it.

I now need to find a small armchair for him

I could get one of those plastic ones you use to put a mobile phone in on your desk, now there's a thought

Glad to be able to help

Bob is a lucky lucky fish, RCA!
Thanks for showing us the process of setting up his tank - some great pics on here!

When I retire, can I come live with you?
OP

V
Is my molly pregnant?