Who has attacked the barb!

Hey guys bit of a problem! Purchased a few new fish a few days back including 3 melon barbs and a figure of 8 puffer. Now the store assistants informed me that the figure of 8 can be a bit nippy but should be compatible with my tank as i have no long finned fish. Today however i have woken up to find one of the melon barbs (although alive) is clearly dying. The tail looks in tatters and it looks hurt. It clearly cannot swim properly and im currently just waiting for the inevitable. I have a variety of different fish capable although over a year this has not happened before. Due to the nature of this im sort of siding towards the puffer..? Another thought is i have a sort of aggressive rainbow shark who has been known to attack and chase other fish in the tank, though never to this extent! Besides that i have a bengal loach, a pleco, a panda garra and 2 gouramis, who ive never had an issue with! Ill attach a photo below of the culprits and the victim! Time to play detective so i can ensure it doesnt happen again! Thanks guys.

(I have placed the injured barb in a floating container where he is currently lying on his side.) 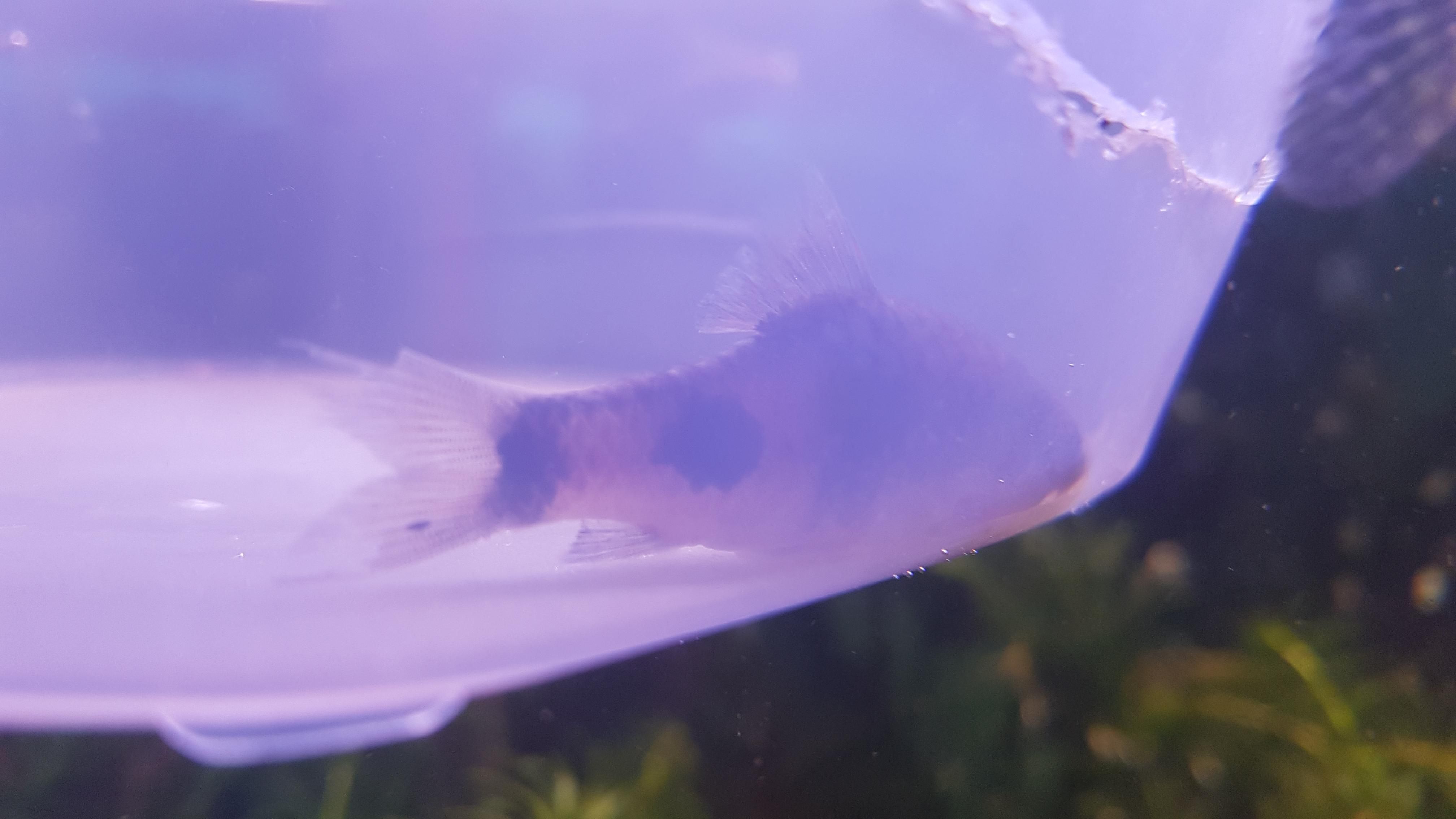 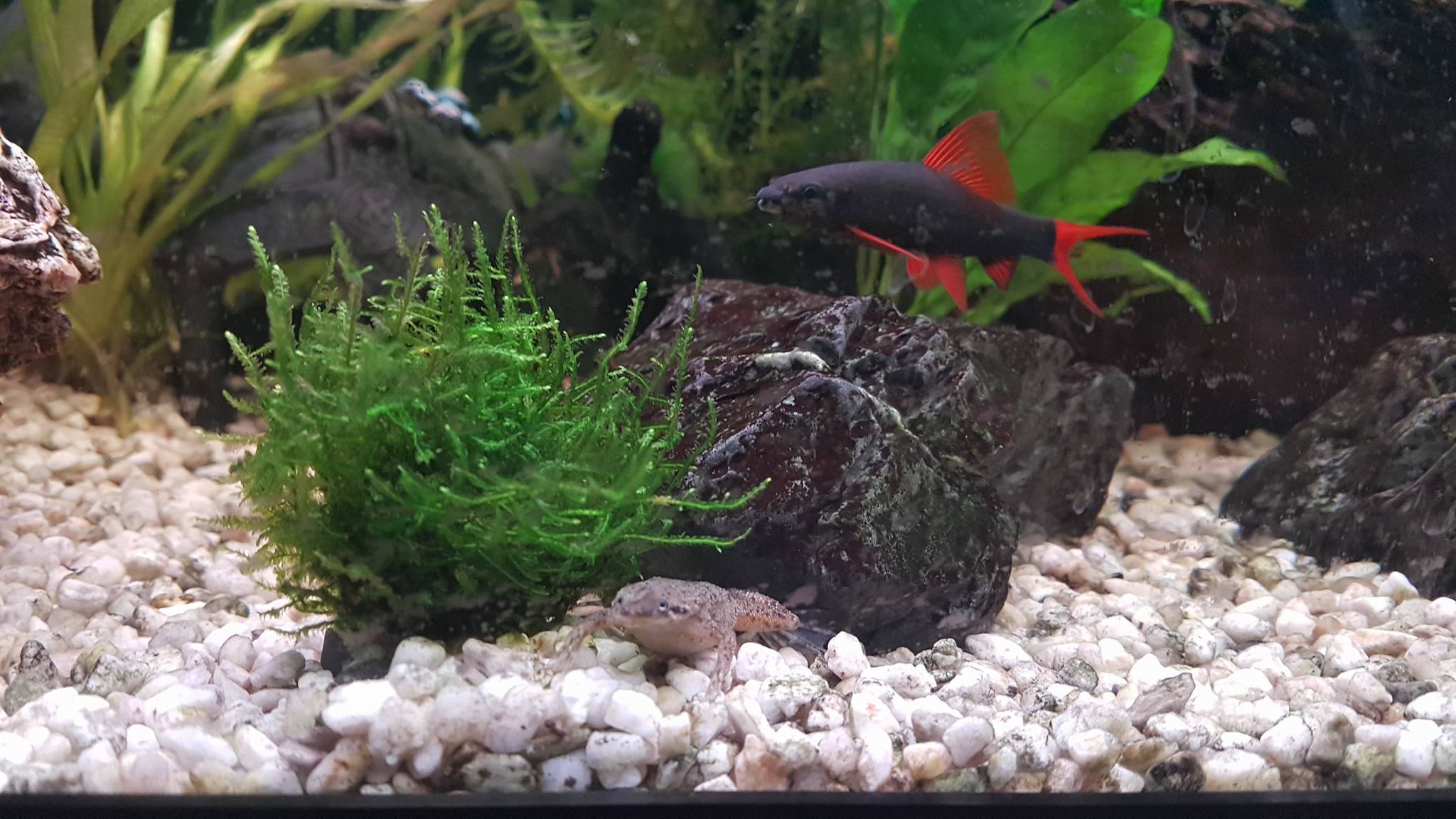 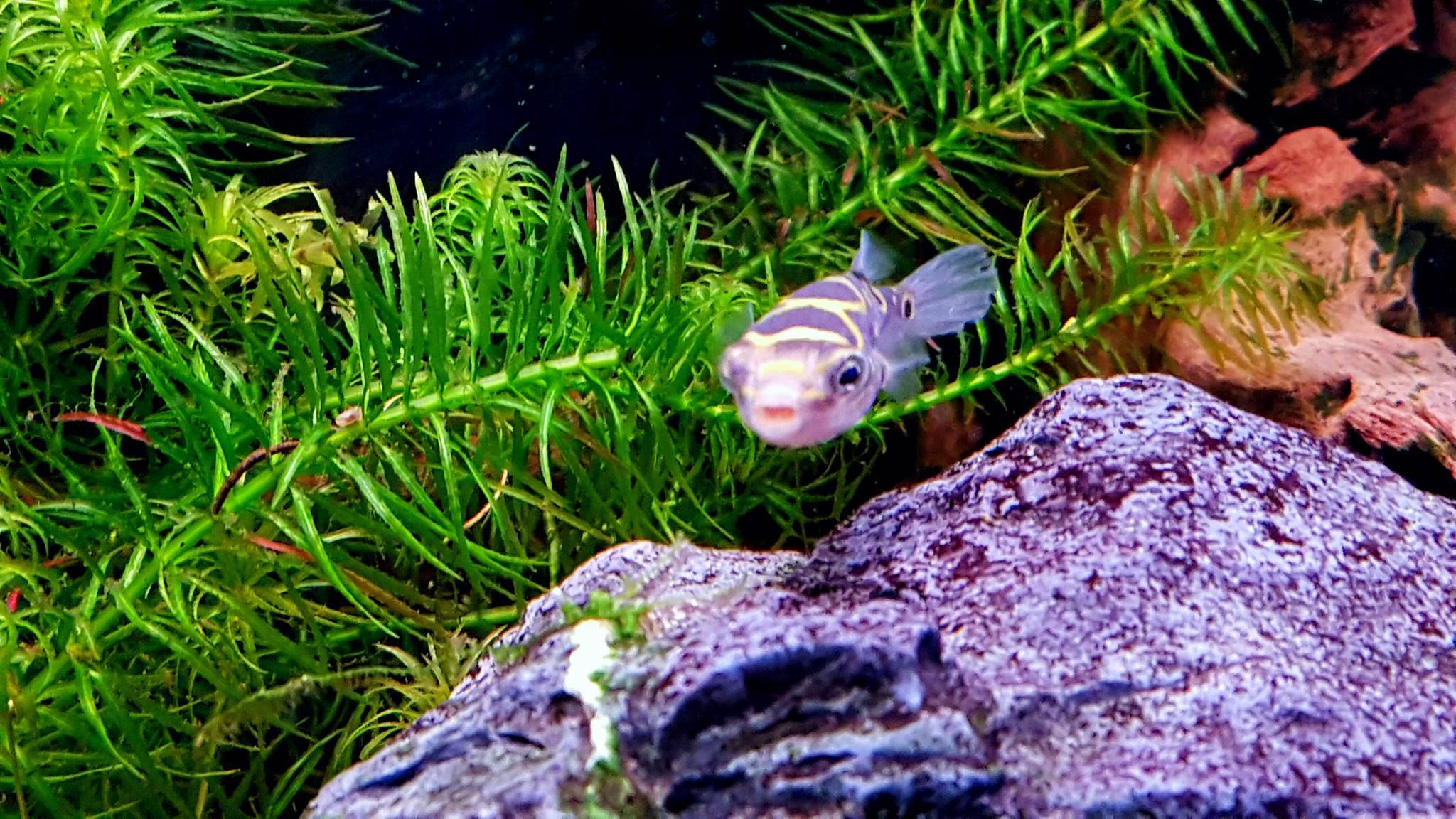 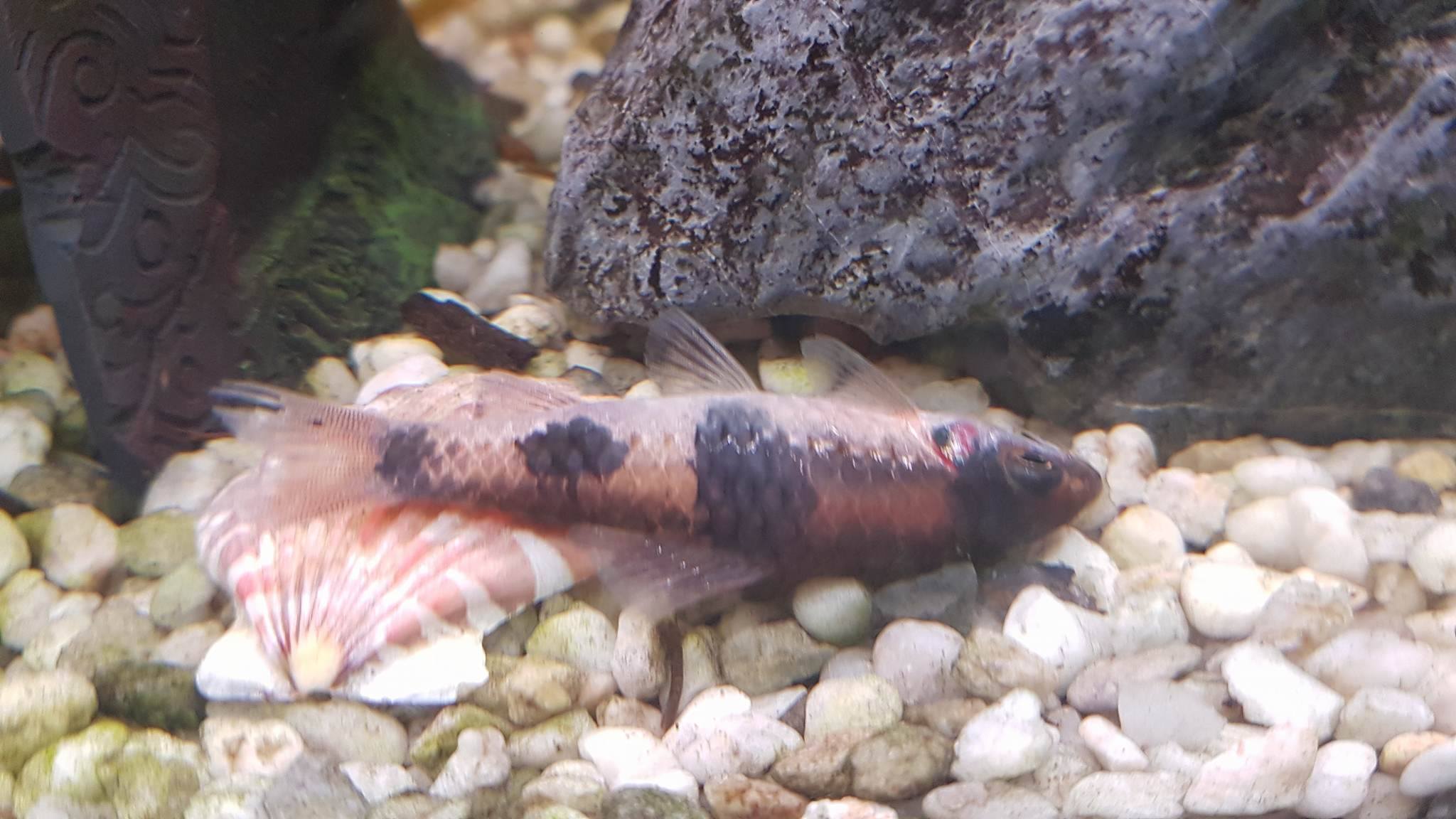 I think that clerk led you down a very wrong path.

Although adorable ...your puffer shouldn't really have tank mates other than it's own kind in larger numbers (if even).

I'm going to take a not so big leap and say your cute new puffer is the bad guy and should probably be rehomed.
OP
S

Perhaps! I've been monitoring the tank a lot today and noticed the puffer hasn't really bothered with any of the other fish today. The shark, however seems to have moved into the hide that the barb originally stuck around. Not sure if this is anything to go by. Also noticed the shark chasing away the other barbs if they stray near him. Very curious..

You have more than one possible culprit.

The Figure 8 Puffer is an aggressive fish and should be kept alone. I would definitely remove this fish (return it, they should take it back, this was bad advice).

The Red Tailed Shark is another aggressive fish. Interestingly, this fish frequently takes a strong dislike to fish with vertical stripes, and the barb has these. You comment on the shark's behaviour is exactly what I would expect. I would re-home this fish too. I don't know the tank size, but this "shark" will grow to 5-6 inches and tends to become more territorial as it matures. With what you are now seeing, this will almost certainly worsen.

The Bengal Loach is presumably the species Botia dario. Like all fish in this genus, they must have a group of five or more. Loaches are highly social fish, and without more of the species this is another possible source of real trouble.

The barbs by the way are shoaling fish and should be in a group of six or (preferably) more; in smaller numbers the fish can in time become aggressive to each other, and this often spreads to other species. And, barbs are quite active fish, sometimes rather feisty, and should not be combined with sedate fish like gourami.

There is a lot to consider with community tanks. And to second guess a possible response that "all has been well for "x" time," let me just point out that inherent fish behaviours are not something we can change. The environment has quite an impact on fish behaviour, whether they act normal for the species or not, and it may be that these fish are still "waiting" to develop.

Byron said:
The Red Tailed Shark is another aggressive fish. Interestingly, this fish frequently takes a strong dislike to fish with vertical stripes, and the barb has these.
Click to expand...

that is so interesting, I've never heard that before.

I would 100% re-home that puffer. I made the same mistake several years ago. I bought a little puffer and threw him in the tank without knowing any better. The next morning I found one dead fish, just the head. It ate nearly an entire fish. Couple days later, two half eaten male guppies. Even if it was the red-tail that hurt the barb, it's only a matter of time before the puffer decided to have sushi.

The shark the photo is a rainbow shark (labeo frenatus), not a red tailed shark. Red tailed sharks (labeo bicolour) are exactly like their description, completely black except for their caudal fin.

luca1980 said:
The shark the photo is a rainbow shark (labeo frenatus), not a red tailed shark. Red tailed sharks (labeo bicolour) are exactly like their description, completely black except for their caudal fin.
Click to expand...

You are quite correct, thanks for noting this; I didn't open my eyes sufficiently, my bad.

To clear up any possible question, it is still a possible source of trouble even though this species is less aggressive in general than the Red Tailed, and its nastiness when present is usually confined to certain other substrate fish. But individual fish as always can vere off the norm--I'm afraid they don't read what we write about them and follow it.

By the way, these two "sharks" were reclassified (Banarescu, 1986) out of Labeo and after a couple of spelling revisions ended up in Epalzeorhynchos which they now share with two others. Quite a tongue twister, Epalzeorhynchos is derived from the Greek epalzeo which is frequently thought to mean "curative" but may actually be "horn" in reference to the protuberance, and rhynchos meaning "snout;" the genus was originally erected by Bleeker in 1855. Not that it matters to our immediate discussion, but perhaps of interest.

No worries Byron for some reason half of my post disappeared - originally I went on to say that I have kept both in the past. My rainbow shark was just a huge bully to everyone and had a massive attitude problem. I had read that the red tailed black sharks were more aggressive than their rainbow cousins, but this was definitely not the case for me. My red-tailed is really quite a peaceful guy and is seemingly quite happy with his tankmates (20 African mbuna cichlids, a bala shark, featherfin catfish and 5 clown loaches). My rainbow, however, has definitely been the most aggressive fish I have kept and would constantly chase anything that came near him - despite the tank being huge, heavily planted with lots of places to hide.
You must log in or register to reply here.
Share:
Facebook Reddit Pinterest Tumblr WhatsApp Email Link

L
Can I house a betta with cories?