What Breed Is Your Dog?

I have a 5 year on English Bull Terrier who is an absolute joy to own. Yea, he's sometimes a bit naughty, a bit of a clown and VERY smelly, but I love him all the same Here he is -

Great smile in that photo, makes ME smile too!


Freedom said:
I am not familiar with the lurcher as a breed, will now look it up and read a bit.
Click to expand...

The lurcher isn't actually a breed. It's a cross between a sighthound and a herding breed. They're usually greyhound on one side, but can be whippets (especially in the north of England) or even more exotic breeds; saluki crosses are very popular in the South, around the New Forest, and deerhounds crosses are also quite common. There are also longdogs, which are a cross between two sighthounds.

The herding side is normally a working collie (like a Border, but not pedigree), but can be bearded collies (Ruby looks like she might be a beardie cross) or even German shepherds.

Lurchers were originally bred by gypsies and poachers; the sighthound part makes them good rabbiters and the collie bit makes them a bit more intelligent than a purebred greyhound or whippet (I have a greyhound, and he's is as thick as two short planks, bless him!), so they can work more or less alone and can find their own way home if their owner gets collared! Traditionally, they were liked if they had a white tip to their tail, so you could follow their movements in the dark, without being spotted by a gamekeeper.

I think we really only have lurchers in the UK (and Ireland); I'd love it if anyone knows anywhere else in the world that has them! I think they're brilliant dogs.

This is my old lurcher, Izzy; she died about seven years ago now;

There was a pic up on our vet's notice board, when I went in with Jack a couple of weeks ago, of a lurcher looking for a home that was the spitting image of Ruby! I really wanted to get her (Jack would love a wee girlfriend!), but I can't afford another dog

aaaaawwwwww Izzy was beautiful. I love lurchers to bits, my grandfather got me started on them by having them on their small holding catching rabbits, Ruby is a beardie, collie x greyhound, storm is border x greyhound, she is smart and sneaky she is my first border x, never again lol. I had Roxy who was a wippet bedlington x  wippet greyhound, Lizzie a beardie x greyhound and Jodie beardie, border x greyhound. They are super dogs. Mine are Hancock lurchers, he has sent dogs to america as they are gaining poularity there. I just hope the kennel club never ever recognises them as a breed it will ruin a lovely dog.

Gosh, yes, keep the KC away from our lurchers! Hopefully it'll never happen; lurchers are far too variable; you'd never be able to write a breed standard for them, would you?!

I don't meet many other big lurcher fans

Izzy was greyhound x deerhound, great cross; my previous dog ( who I don't have any pics of

) was as well; a big rough coated brindle; handsome dog, he was! I remember seeing the Hancock lurchers in a book and falling for them, lovely type.

I'm not a big fan of border/working collies; my mum has had a few over the years (she does obedience with them) and they're weird dogs! Far too brainy for their own good, and very OCD!

Got some thinking to do....been offered service to a big black shepherd in return for a female pup. A few year ago i may have jumped at the chance, now will be seriously doing the pros/cons thing 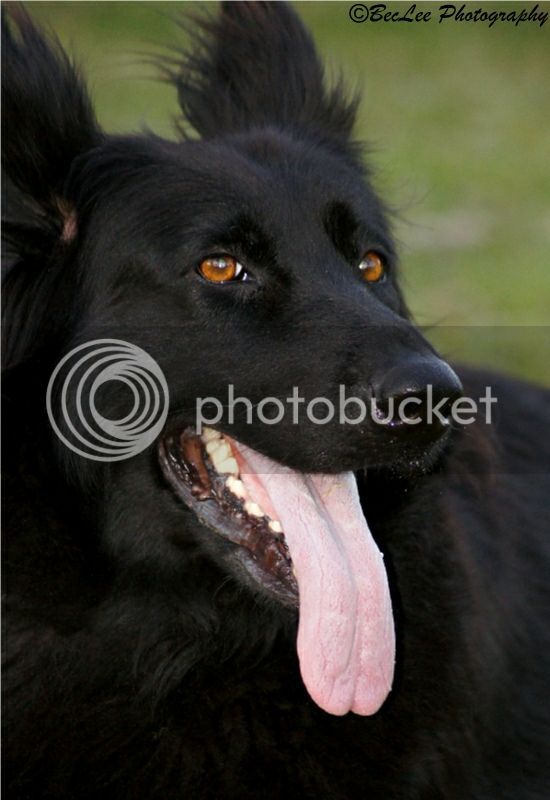 Thanks for all the info re the lurcher.  I did Google it and had read about them.  MUCH more fun hearing it from owners!  Izzy sure was a beautiful gal, I thought of deerhound even before I got to that part of your write up!

Border collies, I've seen them at sheep herding trials, just amazing dogs!  Definitely need a job, CONSTANTLY, or they think of one for themselves, lol.  At the trials I attended, one segment would be team herding -- one dog is trained all the commands in reverse.  So what would mean go right for the majority of dogs, means go left for the team mate.  LOADS of handling skill involved as well.

Fish Crazy, that is a gorgeous dog!  Yep, do your due diligence (or whatever it is called in breeding terms), think on adding a pup to the home.  Then LET US KNOW what you decide to to!
F

I've a little rescue dog called Mac. He's a terrier mix. He's so handsome and clever and I love him madly. I still don't know how to post pics after all this time!

If you use the 'More Reply Options', there's a button, down in the bottom left corner, that allows you to attach a file. It doesn't do very big images though. Or you can use Photobucket (or Flickr) and use the IMG code in your post

It would be nice to see Mac; terriers are such characterful dogs! 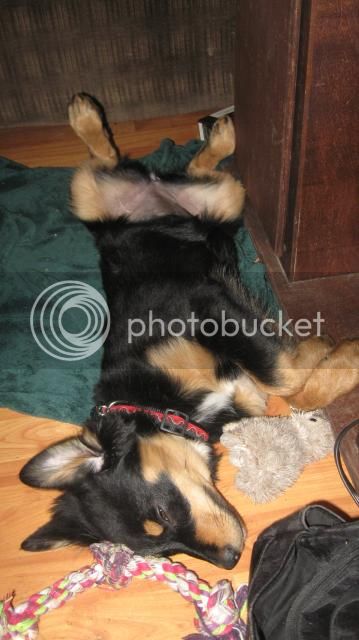 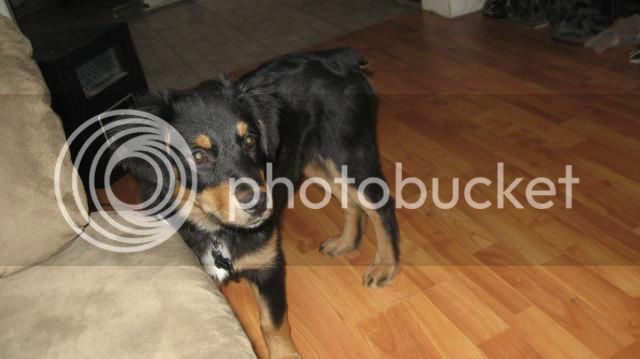 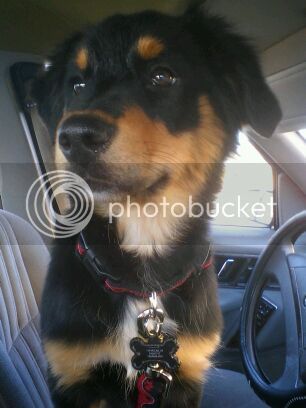 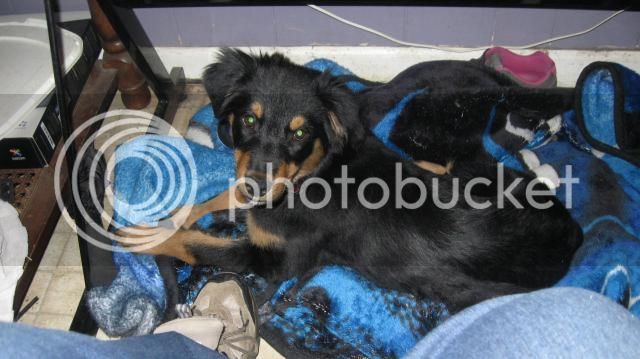 Here is the day she came home, sitting with my daughter. 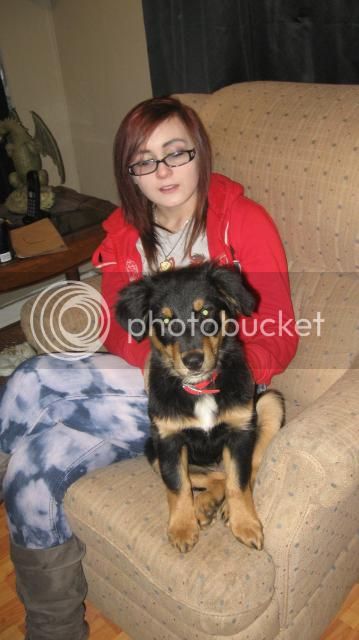 Sweet black - and - tan!  Thanks for posting these photos.  She is a lovely pup and looks like she has just a bit of mischief in her eyes, lol.

I have a 7-year-old Beagle named Cody.  He's my little baby dog

This is Cody, and Yoohoo the Chow Chow that I was raised with who passed away almost two years ago. 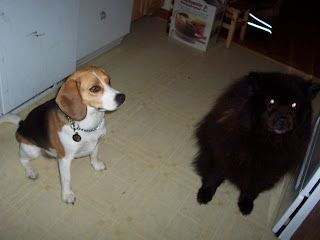 I also have two other Chows in my house.  1.5 year old Seven a cream colored Chow, and 2.5 year old Morgan a red Chow

Hi Cody!   I also call my Tasha "Baby Dog."  Yoohoo is waiting for you at Rainbow Bridge, and likely is keeping tabs on you even now.

Really?  That's funny.  I call him that because I hold him like a baby!

I'm sure she is, she was always watching us while she was alive!

lol well the Chows are technically my parents dogs, they love Chows.  Beagles are more my style!