I will be updating this guide multiple times. This is the first section that I have created and the second sections will be coming soon, as soon as I get hardscape and stuff to set it up and plant it.

Hey everyone, I have mentioned that sometime in the future I would make a dirted tank guide and today is the day. I hope you all enjoy the information I present to you and use it.

I'll start with a back story. I have been a fish enthusiast for about 5 years now. I took a break for the past 2-3 years and came back into it coming into sophomore year of high school last year. I'm a Junior now and my interest for this hobby has only grown. I have always had interest for planted tanks but I could never grow plants because I never knew how. This summer I did more research (when I came back into the hobby) and found growing plants isn't that hard. I went to petsmart and started with a 20 gallon long tank, and seachem flourite for my substrate. I had an ok planted tank for about a few months, and I could grow some nice plants for a few months but then everything started dying. Plants died, ammonia spiked, algae formed, and before I knew it the tank had crashed. I was furious knowing that I had spent more than $100 on this substrate only for it to be worthless now as it has killed my fish, plants, and tanks. I knew there had to be better substrate.

I've always heard about these mysterious "dirted tanks" and always thought they were on the deeper end of the hobby for the more experienced hobbyists, but after reading some books and getting an idea of how dirted tanks are set up, it made more sense to me to set up a dirted tank, and it seemed easier now that I understood how they were set up.

I first started on a 45 gallon super tall tank at my dad's office that I set up. I'll do before and after pictures between the span of 3 months, but I'll put those in a separate thread. I'm hoping this one gets stickied as a guide.

I only used a little bit of dirt and the tank TOOK OFF. I had zero algae, and the plants grew like crazy. I still have to go in every 2 weeks to hack off all the flame moss I have on the driftwood because it grows 6 inches in a week. Crazy. Brazy. There is a carpet of cryptocornes that grow almost half a foot high.. It's the dirt folks. No commercial substrate could provide this many nutrients for the plants.

I've always struggled with dosing nutrients and had confusion with it but with dirted tanks, you don't need to dose things. You only dose what you are lacking severely. You don't need to dose every single nutrient because your plant gets a steady supply of it. The only thing I dose in my dirted tanks are a little pinch of potassium nitrate and CSM+B (basic fert mix), and a small amount of iron. And that's not every day, that's every other day. The dirt takes care of the rest.

I come from experience when I promote dirted tanks. I have 12 fish tanks. I have dirted 6 of them and all 6 have worked out great. Not all are dirted currently only because I tore them down to breed some fish species.

Seachem scientists have done multiple studies and have found that "plants absorb up to 40-400% more nutrients from their roots". Now after reading that, you can imagine that substrate is the key to a healthy planted tank. Think about terrestrial plants. You can't plant them in sand and spray the leaves with fertilizer. It don't work like that buddy.. You need substrate. The main difference between ADA Aquasoil or seachem flourite is this. For $300, I can buy enough aquasoil for a single tank. For $300, I can buy enough dirt and sand for about... 50 tanks. It costs me $10 to dirt a tank, and works better than ADA soil and flourite. Now that you're on board with me, let's dirt a tank!!

I recently dirted my 29 gallon, but that took me a lot of time to work with and a lot of time to make progress on so I couldn't keep a good log of it. I am setting up an old 10 gallon I have to use as a puffer tank or an endler tank or something. I mainly just need a really nutrient rich substrate tank for my dozen amazon swords I have floating in my 29 gallon.

First step. Get dirt and a strainer. You need to strain out the big chunks of wood chips, etc, because the companies that make the dirt add lots of them as filler. Don't strain them ALL out, but the majority should be out. I like to do 1 cup of strained dirt:1 handful of dirt with wood chips. you need woodchips, but as many as they put in their mix. Make sure you use ORGANIC DIRT. Strain as much as you want, but know that you should only be using 1/4-3/4 inch of dirt in a tank. Here are some pictures of the straining method I use and how much wood chips are in a handful of dirt. That's a lot of woodchips right? 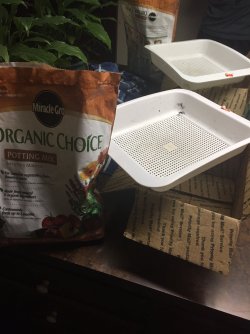 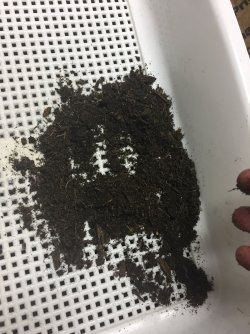 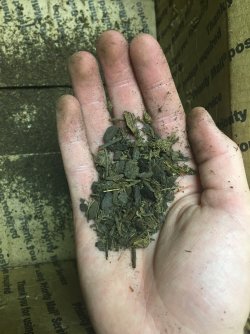 Ok. Now you've got your dirt. Put however much you want in the tank as long as it's within 1/4-3/4 of an inch. I personally would go 1/4 or a half unless you have many heavy nutrient feeding plants.

2. Now this is the extra step but I do recommend it to everyone. Adding clay and flourite. Clay and flourite are beneficial to the plants because they have clay and iron which help with reds, as well as plants that require these nutrients (all). The flourite like I mentioned does have flaws and isn't the best substrate (quite frankly pretty bad) by itself. It is rich in iron and clay to help the dirt. Here I took an old clay pot and crushed it up with a hammer and put it in the tank on top of the dirt. I also put some flourite on there too for added nutrients. Just a sprinkle. About a quarter of an inch is fine. 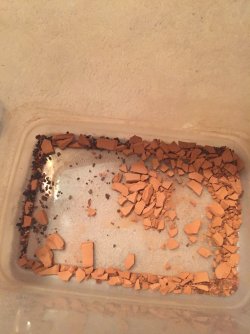 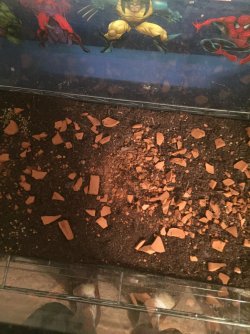 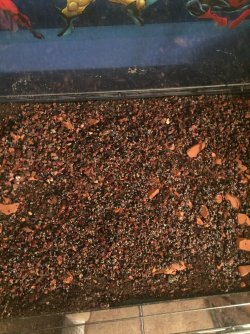 That's all for the dirt mix. Next I will show you how to cap it, scape it and plant it. Capping is the most important part, so PLEASE don't fill it up if you are at this step. I look forward to bringing the next part of this guide. It should be out sometime this week or next weekend. I'm busy with school and need to get some inspiration for this tank so I know how I should go about scaping it. Thanks!! Come back soon!!

Why do you have a photo of a roasted chicken? Are you planing to put it in your tank as a decoration?
OP
OP

NickAu said:
Why do you have a photo of a roasted chicken? Are you planing to put it in your tank as a decoration?
Click to expand...

Oh... I accidentally took the turkey pic for our thanksgiving in my fish album haha... just ignore it lol.
B

I look forward to the next installation, keep 'em coming
N

I look forward to the next installation,
Click to expand...

Are you referring to the Christmas turkey?
B

Mmmmmmmmm hmmmm
You must log in or register to reply here.

8 minutes ago
Back in the fold

D
How to know the crayfish is dead

36 minutes ago
Alice B

K
Has any one kept an electric blue jack dempsey with a rainbow shark fish?