I've been watching my Honduran Red Points fish do some stuff recently that I thought some of you might find interesting, so here goes --

My largest female, Zinnia, and my largest male, Rhaegar, successfully spawned about three months back. As soon as fry were free swimming, dad lost interest and attempted to pair off again with his baby momma's sister, which caused some issues so I removed all the males into another tank.

About a month and a half later, I saw Zinnia and another female, Memphis Pearl, flaring at each other and eventually kind of teaming up to protect Zinnia's babies with Rhaegar (who is Memphis' brother). They have been inseparable for about two weeks. Cute. Memphis Pearl is the smallest of all my red points, and I think I have seen her with an orange belly, so I strongly believe she is female. But today I found another cave dug out, Zinnia in it, and Memphis Pearl patrolling the perimeter. Zinnia was actually fanning the roof of the cave as if keeping eggs oxygenated. But I didn't see any eggs actually laid for her to be fanning.

In pic, Memphis Pearl is top-left. Zinnia is in the cave, circled.

I can't find anything about this type of fish being hermaphroditic. Anyone experienced this?

are you certain of the sex of the fish?

can you get some more pics of the fish for us?
OP
OP
S

Hi! Thanks for your response!

I am certain of the sex of the larger one. She has a very orange belly most of the time. And has had babies. She is about 2.5 inches, unsure of age but she hasn't grown in the 4 months I've had her. This is Zinnia, 2.5 inches and done growing: 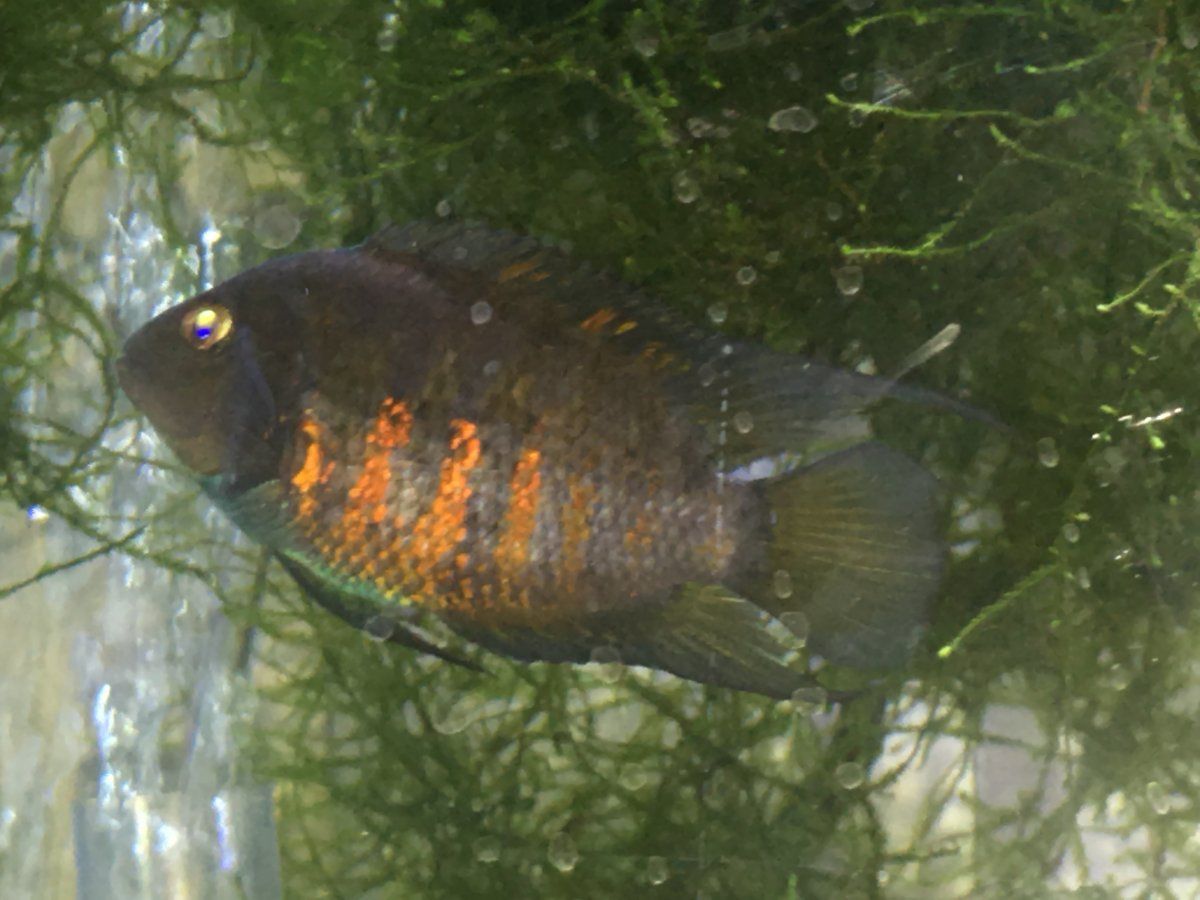 And the smaller one is about 1.75 inches. Here she is with her sister, Lawn Boy. They are about the same size but LB is just a little bit bigger. Here they are one year old, Memphis Pearl circled: 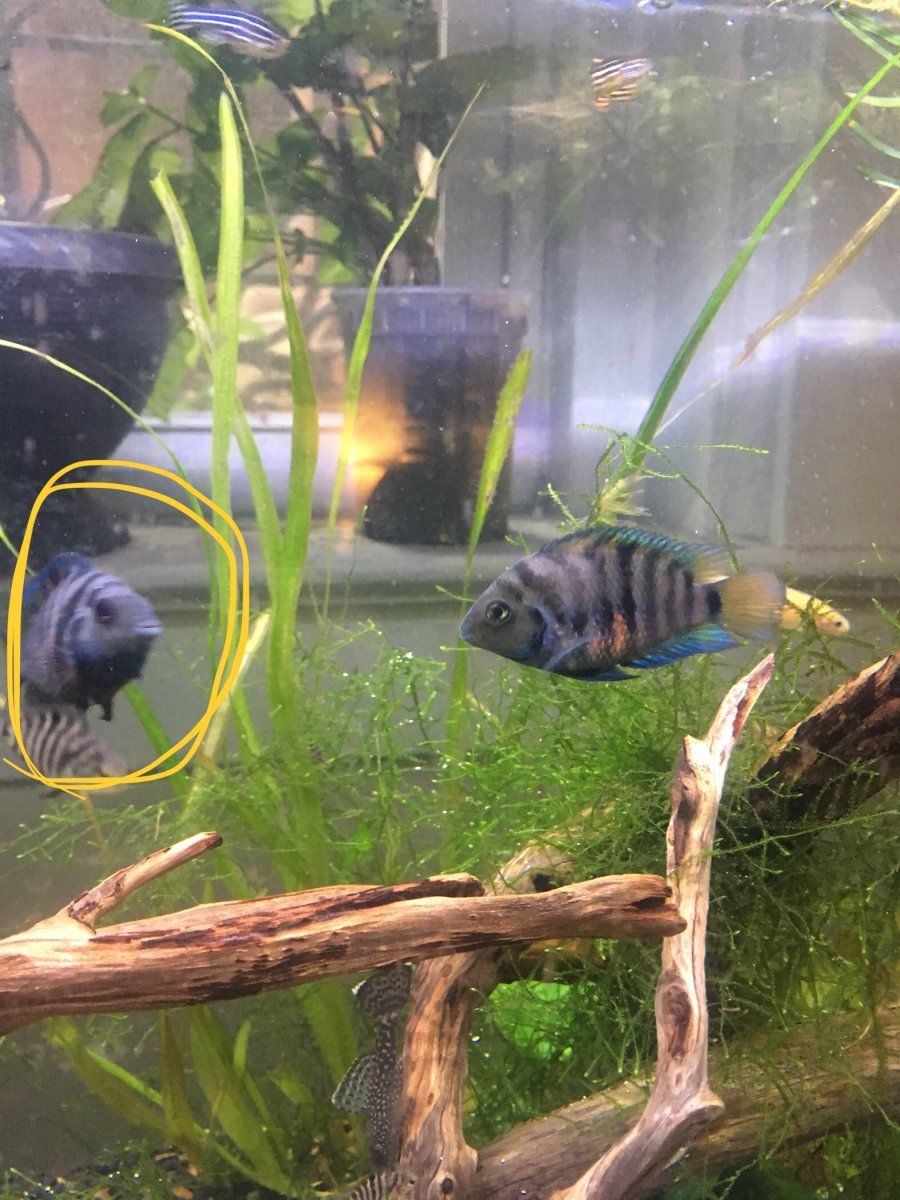 They have brothers who are white/blond (their dad was too). Here's one for a size comparison, and Memphis Pearl is again circled: 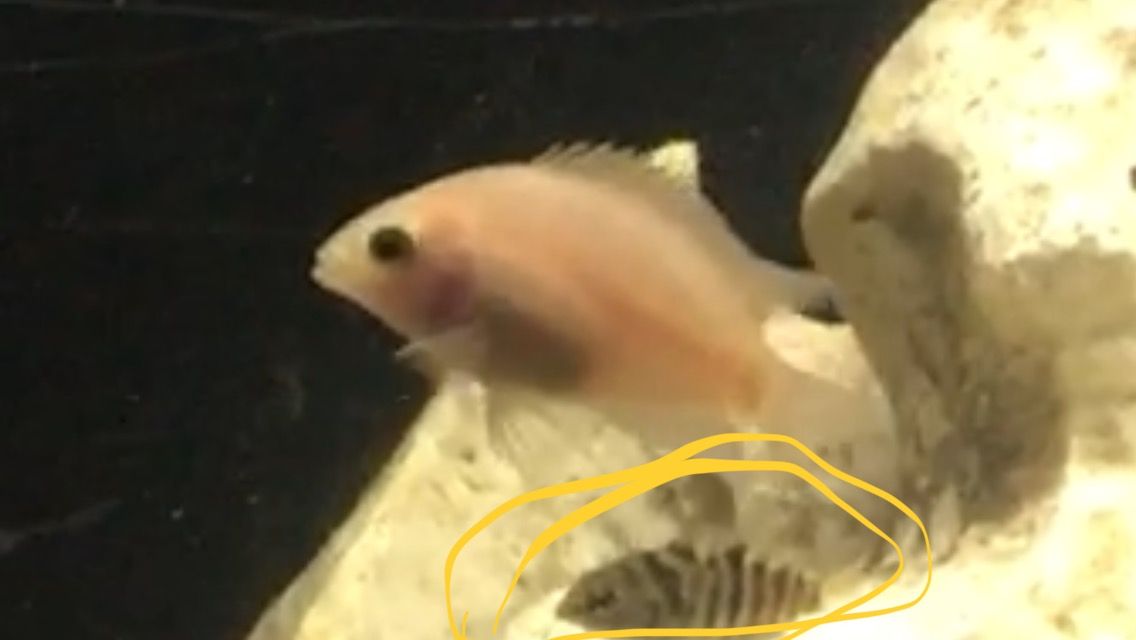 I can't imagine that their sizes would be that different if they were both male. What do you think?

More pics of the two ladies are coming~*

With honduran red points, males can sometimes have some red on their belly as well so it can be hard to tell.

Red points are often confused with convicts because they are so similar in appearance,size and behavior. Red points have a more rounded head than convicts. Maybe someone else can chime in here, but from what I'm seeing I think you have convicts and dad is actually a pink convict.

With convicts it's easier to tell them apart. Males do not have a red belly and the females do.
OP
OP
S

Here is another thread where I asked that:

But, size-wise they are abou right for HRPs, and the size of the broods were about 40-70 babies each time, within range for red points but would be low for convicts. Each brood was one of the larger older HRPs x one of the leucistic HRPs. Think they are HRPs.

Yeah, that picture of the parents even more leads me to believe that they are convicts.

They are beautiful fish no matter what species.
OP
OP
S

I’ll just have to wait and see how big they eventually get.

More pics of of the two fish in the cave. Looks like they did lay about 30 eggs. The older one leaves the cave often and the small one takes her place and fans. Didn’t happen when the large female had her other fry, she guarded those eggs like a hawk.

Whether he is an HRP or a convict, he is a super tiny guy. I’m just surprised is all.

There’s also I guess the chance that the big one laid the eggs and the other didn’t fertilize them, because she is female. I watched another pair of mine lay eggs, and saw that they do come out that big. I guess it’s a long shot but I really feel like I’ve seen her with a red belly, at some point.

I also see on the smaller one what looks like the egg laying tube. Does anyone know if the males of the species have a similar organ in that place? I’ll try to get a pic.

Yeah, looks like a male and female to me.
OP
OP
S

confirmed male. we have wigglers.this is what i thought was his egg-dropper. not sure what you would call it, gonopodium? 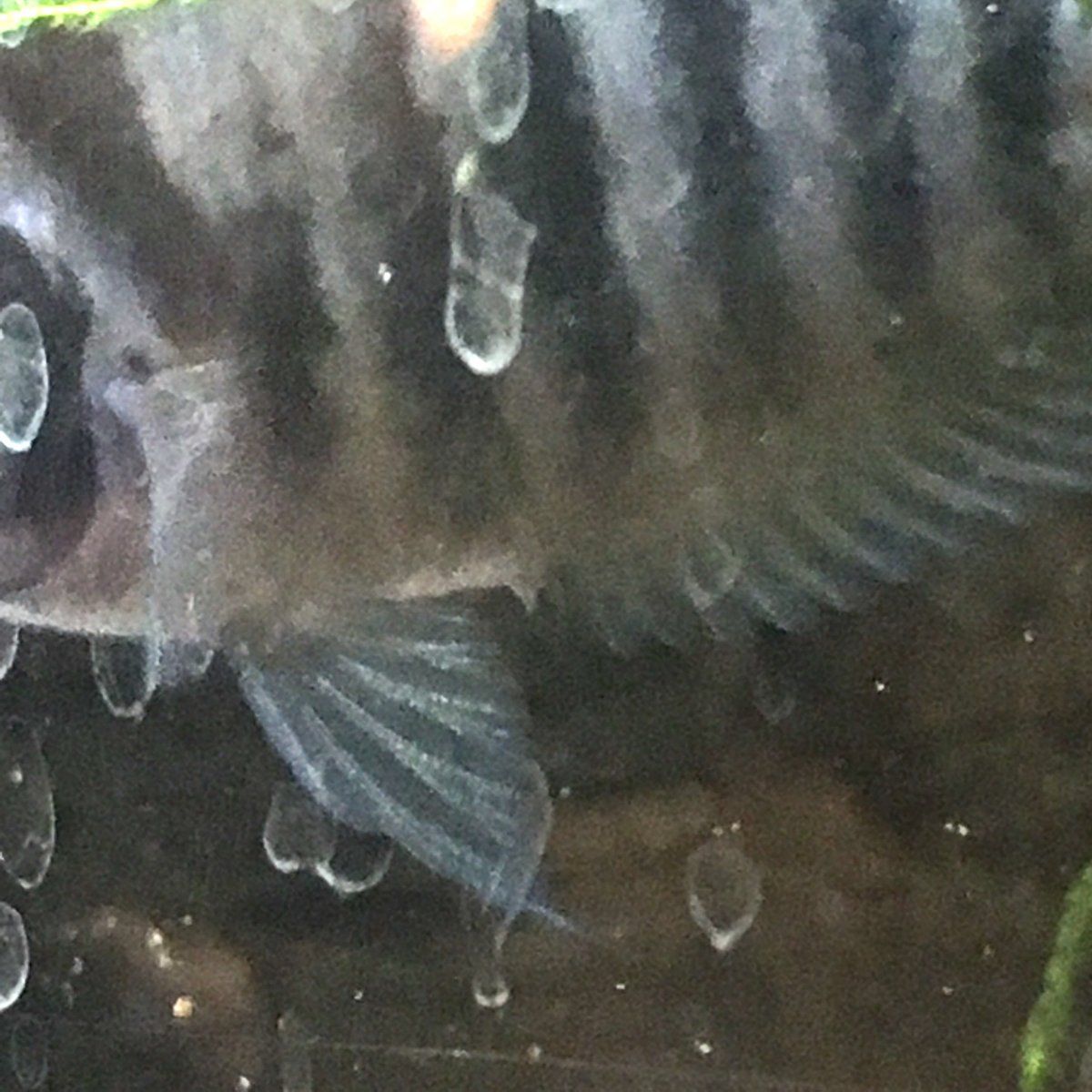 also, would anyone be able to confirm/deny that his sister is female? she has an orange belly, but much less than the other two older ones. wondering if she could be male with this much orange. here: 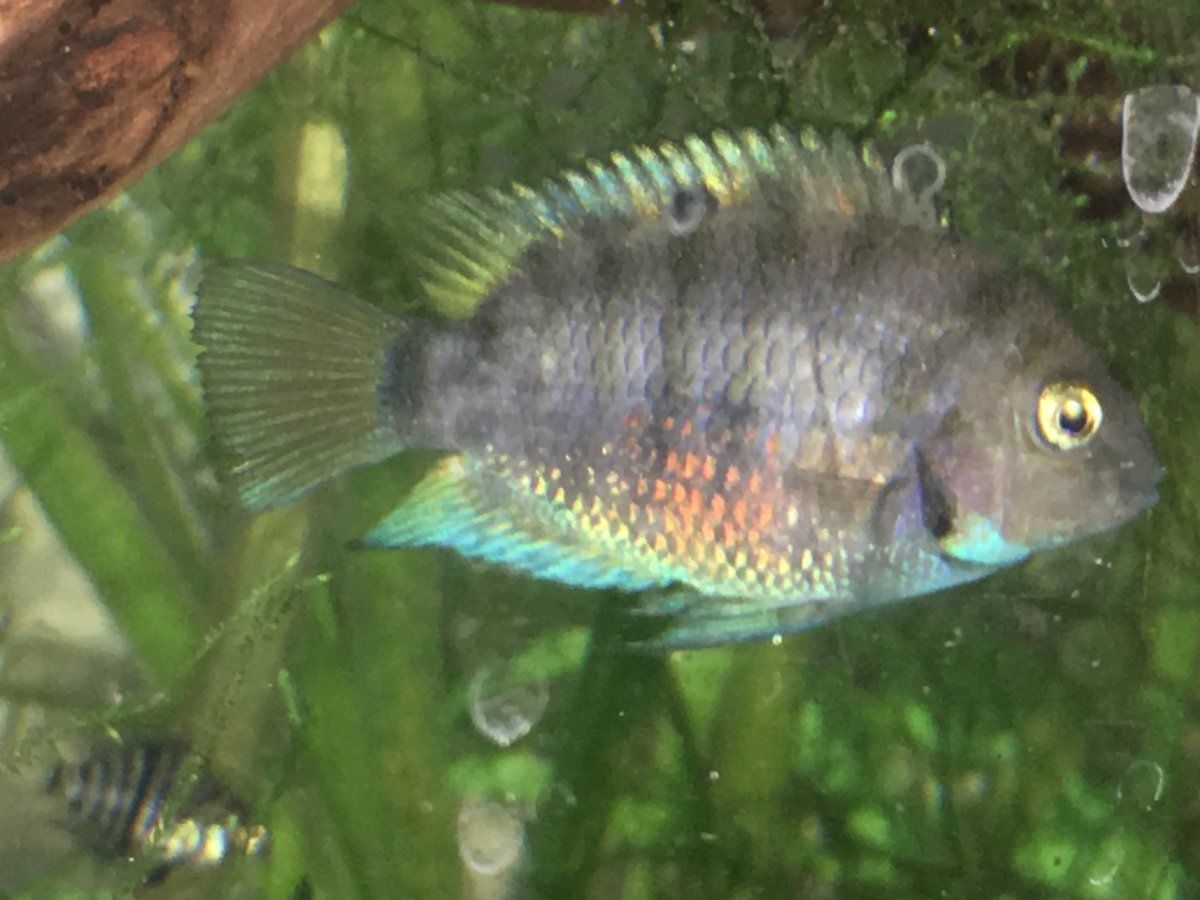 shrimp_lass said:
confirmed male. we have wigglers.this is what i thought was his egg-dropper. not sure what you would call it, gonopodium?
Click to expand...

11 minutes ago
lvacey
L
V
Can anybody help identify this?