Volkner..sounds like a very strong name. It reminds me of a character from SMITE (a game) called Vulcanus.

Cool my friend plays smite its a very unique game fps league of legends
so are you gonna name him volkner?

THREE MOR POSTS UNTIL I CAN ENTER THE FISH OF THE MONTH YESS!!! boy iam pumped

1 more month for me to come back from boarding school

heres burpee before i moved him to his bigger tank

I will think about it

Remember you have to be a member for 60 days as well as have the 60 posts to enter. That time will fly by though.

Oh what a handsome boy and a cute name!

Volkner..sounds like a very strong name. It reminds me of a character from SMITE (a game) called Vulcanus.

It's okay, I'm sorry for reading it wrong.

So.. I think I've told some of ya'll about Discord (betta in my profile pic) getting pineconed when he was in the 20 long, possibly from gorging himself on the cories & snails food.
I was able to treat him with epsom salt and then moved him to his own 10g. Recently the pineconing came back and even with clean warm water and epsom salt it was not going away.

I just found him a little while ago, passed away.

Discord, you're the most beautiful betta I've ever seen and I think you always will be. I love you and will miss you very much but am so glad you don't have to suffer anymore.

Oh no Ninj! I'm so sorry to hear this! Discord was a wonderful betta and he couldn't have had a better life!
How long did you have him for?


Your new betta is gorgeous!!! Great find!
What about Ziggy as a name?

I only had him for a year and a half.

Glad you like him! Ziggy is cute..he does seem to go everywhere. I am so picky with names

He got into trouble the other night. He got into the smaller..house-y sort of decoration. He was pointed straight up and wiggling and I thought he was being silly.
Then he went up higher and disappeared and I was like uh...cause I knew that the top of it was really small.

My dad had to break the top off to get him out and he got a bit scraped up.
He's looking better already though and my dad has filled the top of it with silicone and glued it back on.

Silly curious fishy! I am very glad I was in there when he did that as he would have probably drowned overnight. I am extremely lucky once again

They both arrived safely and I could not stop going awww! There's not much else I can say except I've been enjoying them very much

Here are some pics though they're not the best as they don't really stop moving. The red/white is apparently male and the white may be a female.
I didn't intend on having a male and female it just turned out that way with the ones that I liked 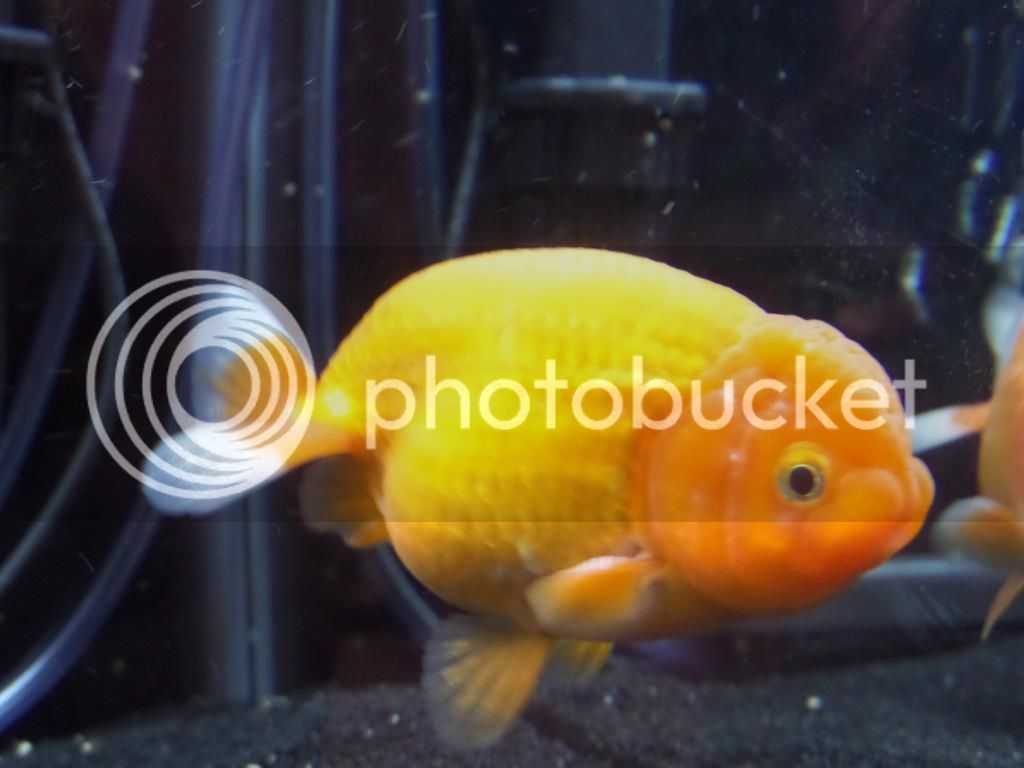 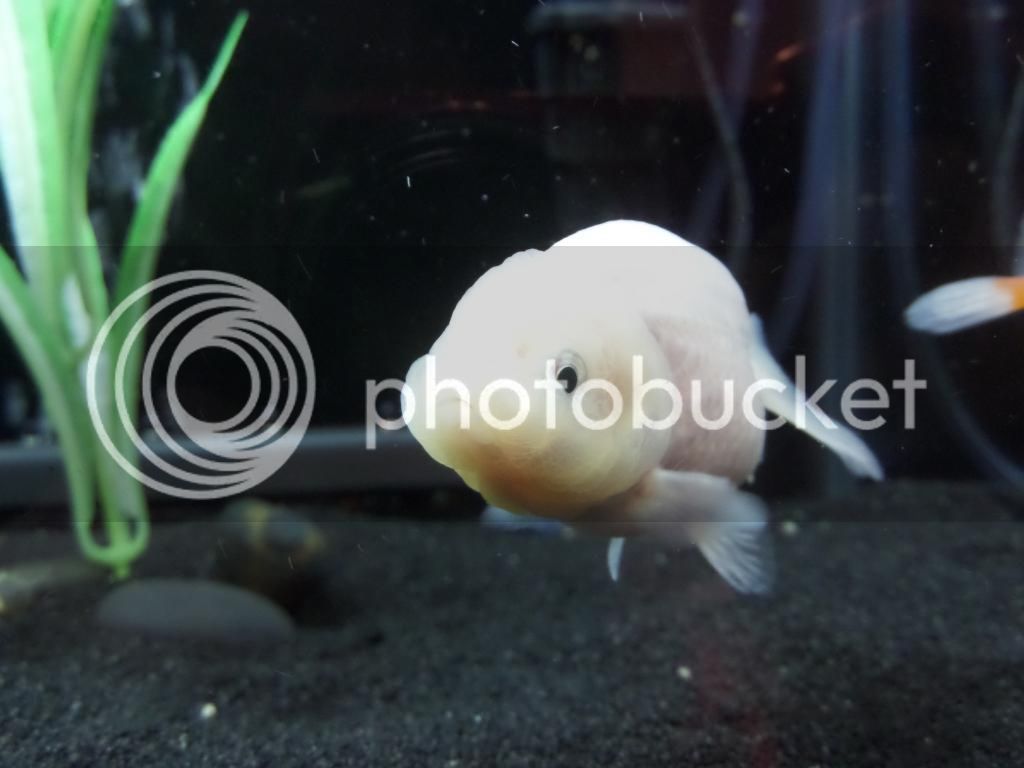 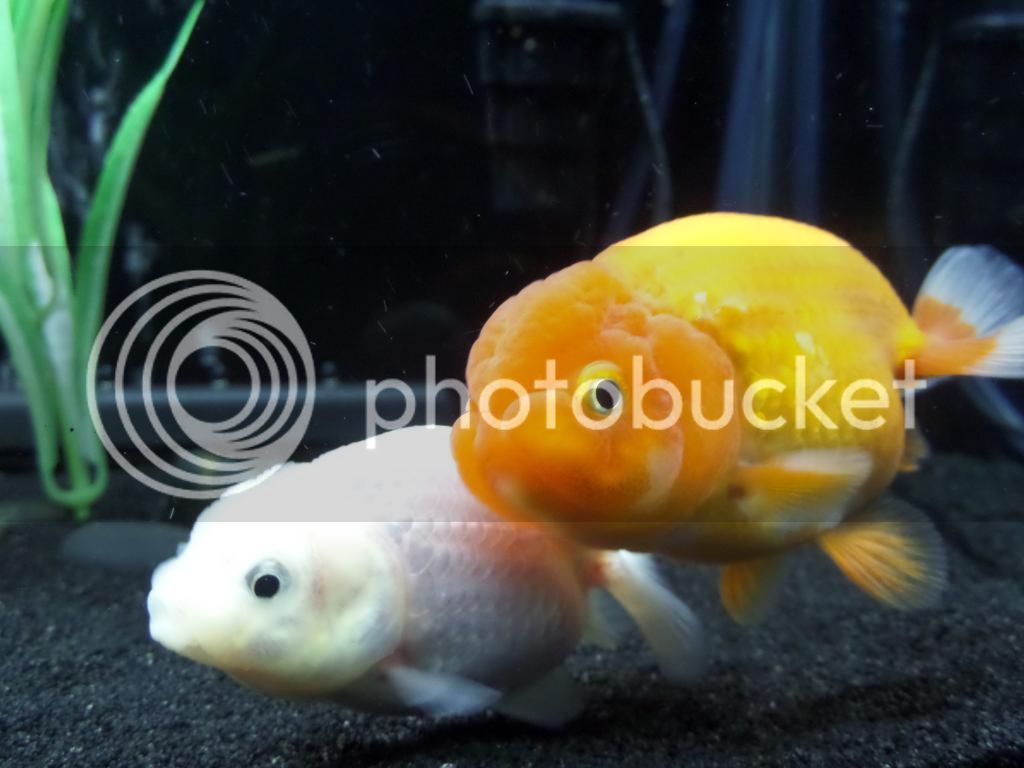 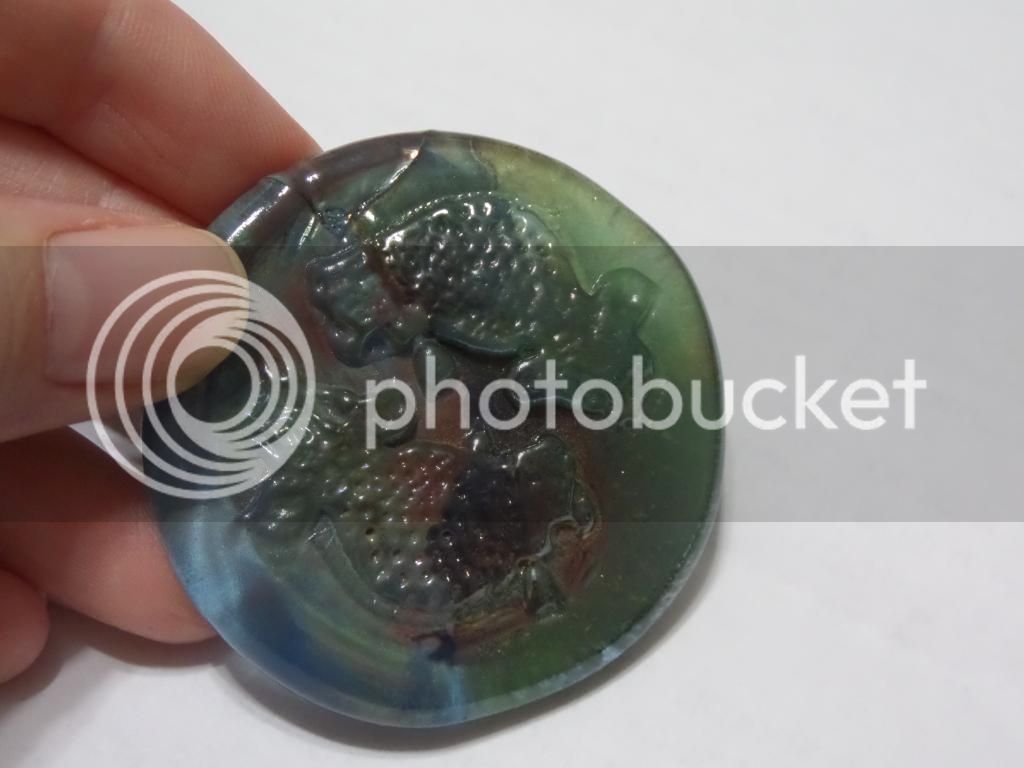 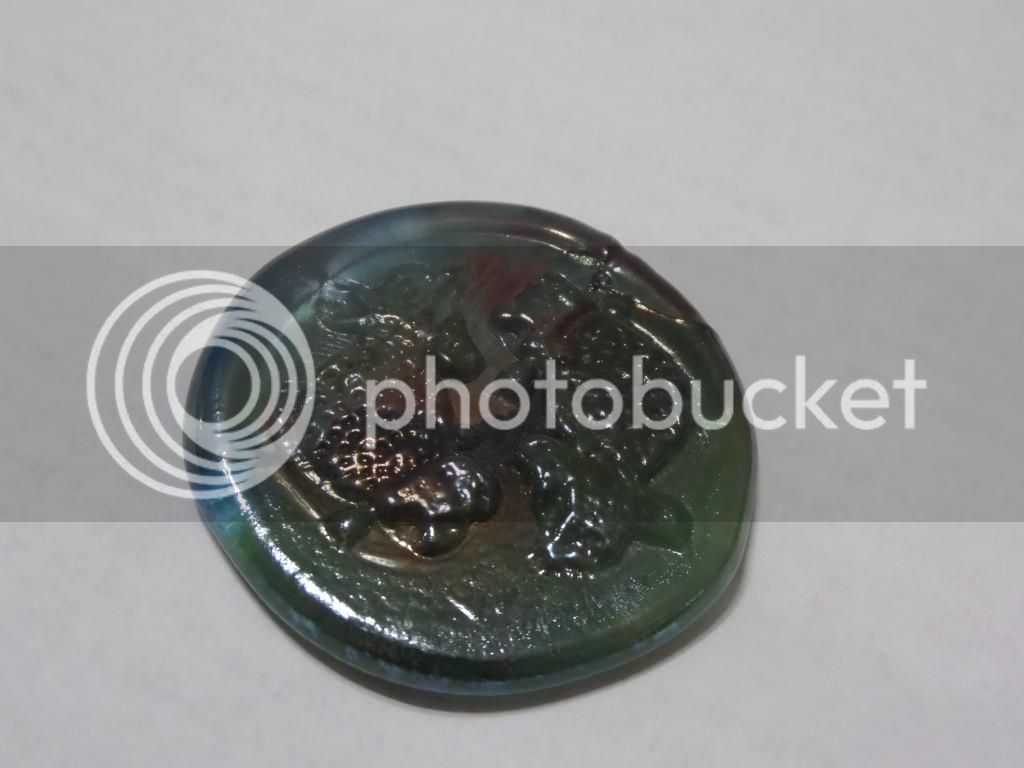 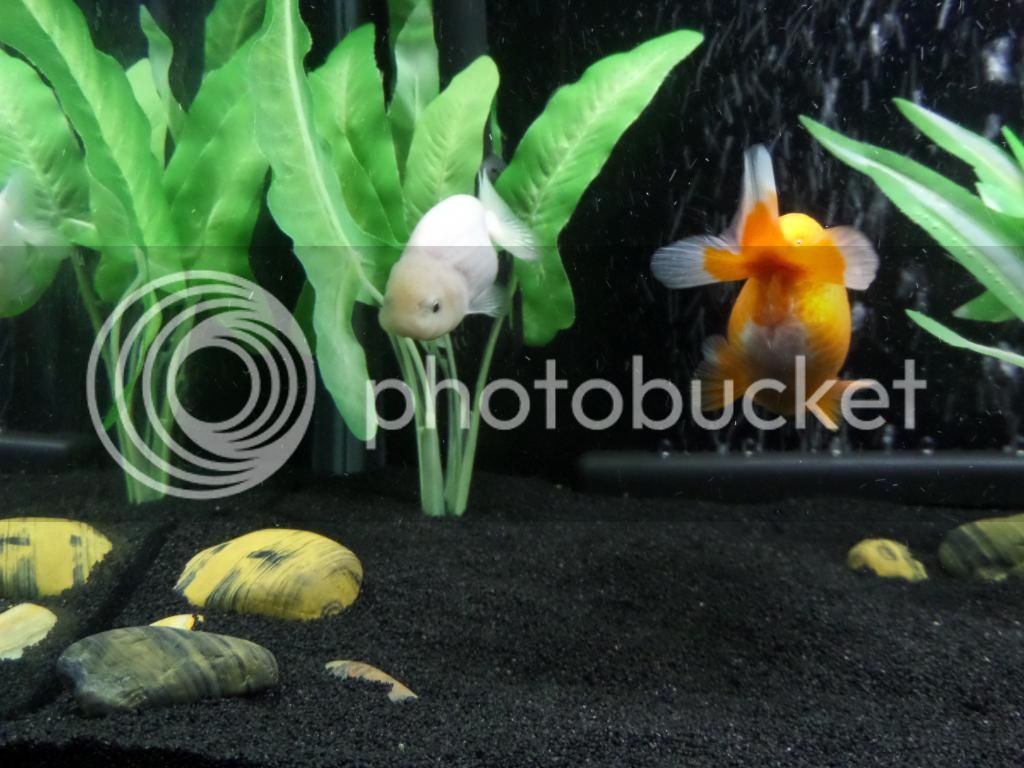 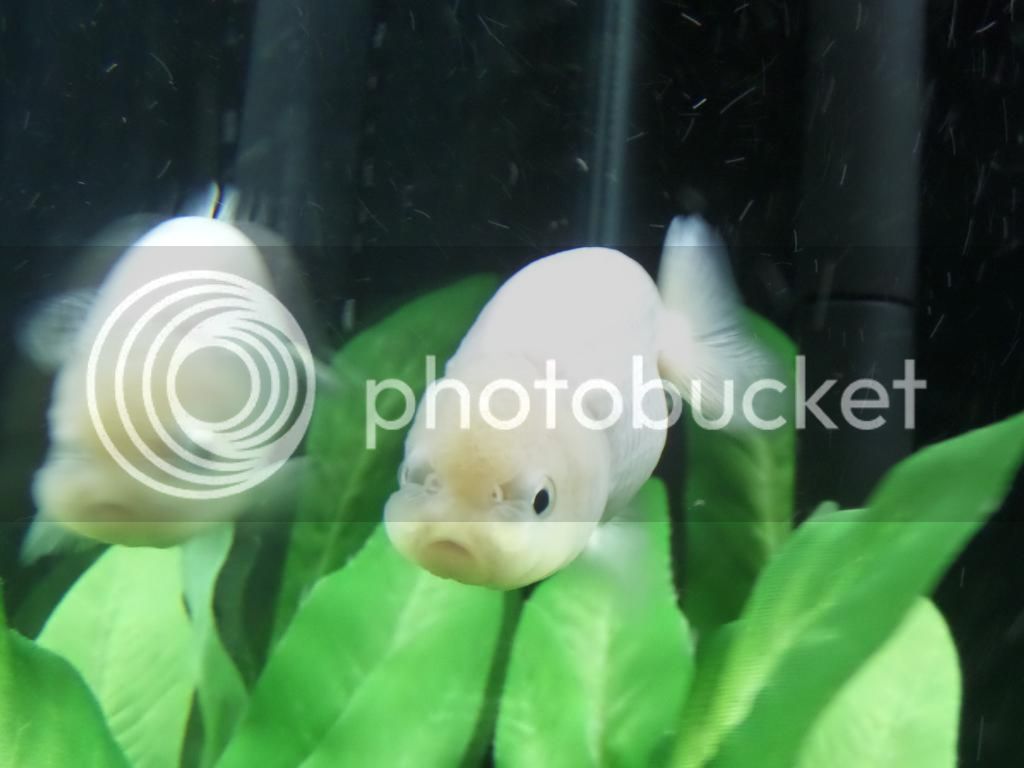 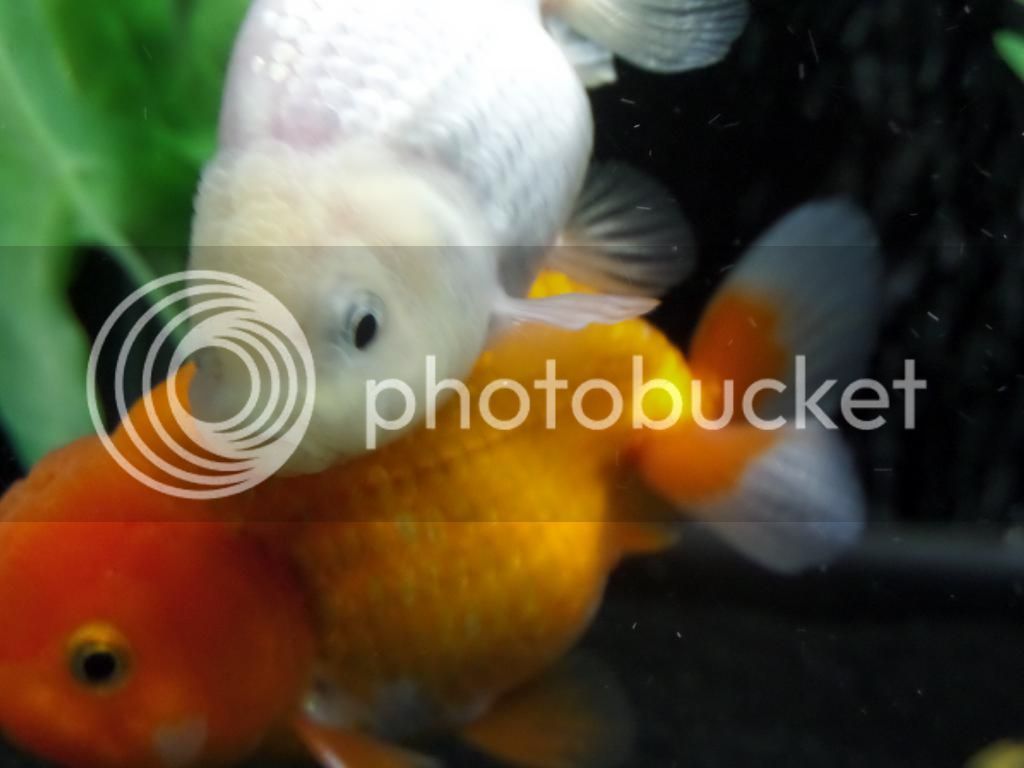 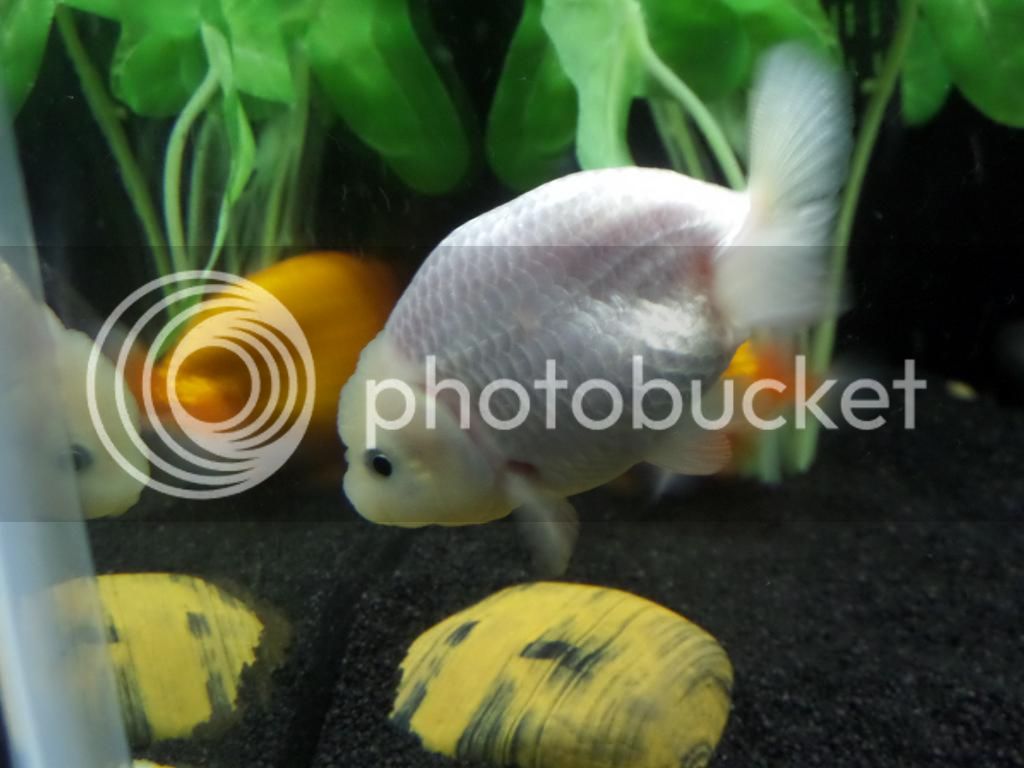 And of course here is a vid

I have baffled the filter a little since then as before the food was getting blown around so much they couldn't get it.
http

Thank you! I love watching them. My dad tells people that visit about them and how cute their faces are so I think he likes them too

I was so tickled he sent me that medallion.


Goggy said:
love ranchus got a few on my trip to a local funfair along with a comet
Click to expand...

They had ranchus at a fair? Sad that things like that still happen. I hope they have a good home with you.

Thank you! I love watching them. My dad tells people that visit about them and how cute their faces are so I think he likes them too

I was so tickled he sent me that medallion.


Goggy said:
love ranchus got a few on my trip to a local funfair along with a comet
Click to expand...

They had ranchus at a fair?

Sad that things like that still happen. I hope they have a good home with you.

Any updates Nin? How are they all getting on?
OP

Blondielovesfish said:
Any updates Nin? How are they all getting on?
Click to expand...

Things are okay right now. I had some personal issues lately is why I havn't been on much.

I've had a few losses the past few months. In the 20 long Im missing 2 espei rasboras. Both were looking sickly and they disappeared before I was able to medicate the tank.
The remaining 4 have been doing well though. It's hard for me to get a head count on the hatchetfish

In my 55g I have lost two albino cories, one a while back and then one a couple weeks ago.
The first one I had found dead and never noticed anything wrong with it, the second it looked like its fins were messed up and it was breathing hard. It had passed away the next day.

I try not to post about the 129g here but I figured it'd be good to just write all the losses here. Lemongrab passed a while ago. It was very sudden. Nothing out of the ordinary..he was perfectly fine at one point when I looked, then a few hours later I checked the tank and he was lying on the bottom dead. Him and the striped angel never got along so I wonder if that had something to do with it, even though Lemongrab usually put him in his place.

Without Lemongrab the striped was able to terrorize the black angel again..and then one day I came home and found them laying eggs. They were gone the next day

I think I still want to re-home them but not sure right now. I have 3 angels so I do need to add more or re-home them I think.

I've moved Frosty the betta from his 5g to a 10g on my desk (me and my dad did this yesterday). He is not looking well, laying on his side and barely moving.
All of these tanks have been maintained just as they always have so I'm not sure why all these bad things are happening. I hope Frosty makes it

Sorry to hear of all of this happening, hope your tanks and stocking will be all good from now, fingers crossed

Sorry to hear about the losses!
Hopefully Frosty makes it!

Frosty did not make it, sad to say..and did not want to post about it when it happened. It's been quite a while. Female ocellata has also passed since then and some tank downsizing has happened.

Here's a video focusing on the bn in the 55g. He's too pretty!
https

And my newest betta, although I've had him for a few months now already. The elephant ear is still around too, he's just not my desk buddy like this one is

Uhh not sure why this picture is so huge. Im sorry.

Yay, glad to see you here!!

I'm downgrading a bit. Once I'm done all that I'll have is the beautiful betta I posted about above (now named Ymir), my two cutie ranchus (will be getting more goldies too), and my beautiful (and bratty) flowerhorn Rex which is in this thread HERE.

It sucks seeing my other fish go, but I think they're going to good homes. I'll try to get some pictures soon.

If you could have one freshwater fish, what would it be?
2