Great to see continuation threads B)

I never saw this first time around, but I just read through it and wanted to say how pleased I am that your lil blue lobbie is all recovered and looking really really healthy. What a fantastic recovery! This sort of thing should be pinned in this section so that if it happens to other people they know what can be done to help their animals, rather than euthanising them. There were lots of great pictures taken along the way that would make it really easy for people to see how the regrowth occurs etc.
That's just my opinion anyway

xautomaticflowersx said:
This sort of thing should be pinned in this section so that if it happens to other people they know what can be done to help their animals, rather than euthanising them. There were lots of great pictures taken along the way that would make it really easy for people to see how the regrowth occurs etc.
That's just my opinion anyway

I'd love it to be pinned, not sure if it would be though, who decides?
R

I think the mods decide, and congratulations!
OP
J

My male just shed this morning, so he's gotten even bigger! I was a bit worried for her as he's literally about twice her size but because he's vunerable at the moment he's terrified of him, a minute ago I saw her chase him, rip off a leg and sit there eating it! Now I'm worried for him, she wont let him near his shed and she's eating it, do you think this is a problem for him not being able to eat it?
OP
J

Very bad news, I'm gonna have to take her to the shop first thing in the morning, I'm very sad! She's ripping my male to bits, I'm worried he's not gonna make the night being in there with her, he's only got one claw now and on one side he only has one leg! It's 3am now and I can't go to bed cause I'm worried that he's gonna be dead in the morning. I haven't got any spare tanks, I did think about putting her in a bucket until morning but I can't heat it or filter it. I'm gonna have to take her to the lfs unless anyone wants to adopt her? After all I've been through with her, I feel saddened that she's doing this, I know she doesn't know any better but still.....

Right, I couldn't sleep, I had to do something, I put some water in a bucket and have had to put her in there until morning, it's only a few hours away now. Here's a couple of pics of her and him. 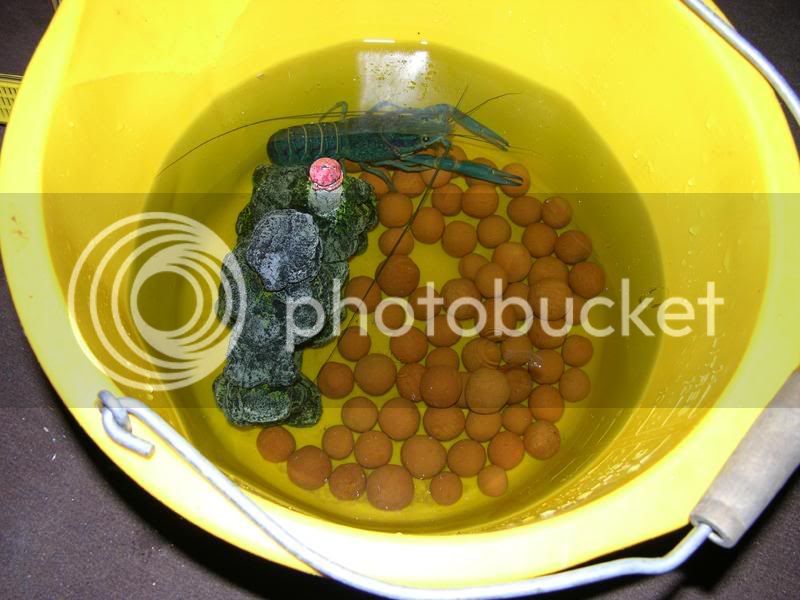 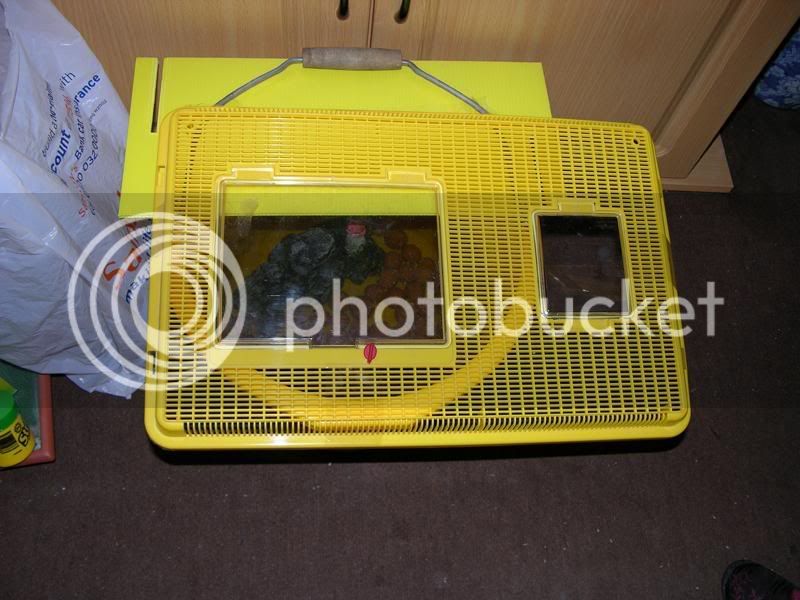 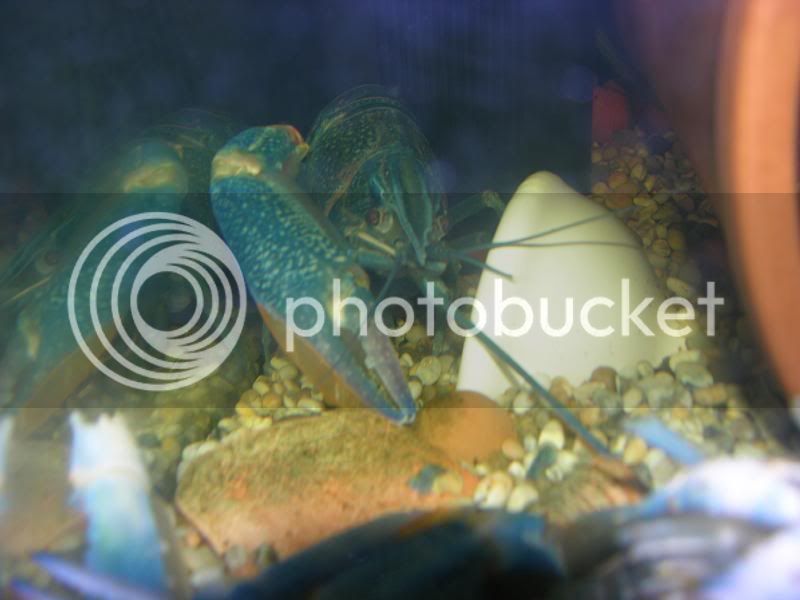 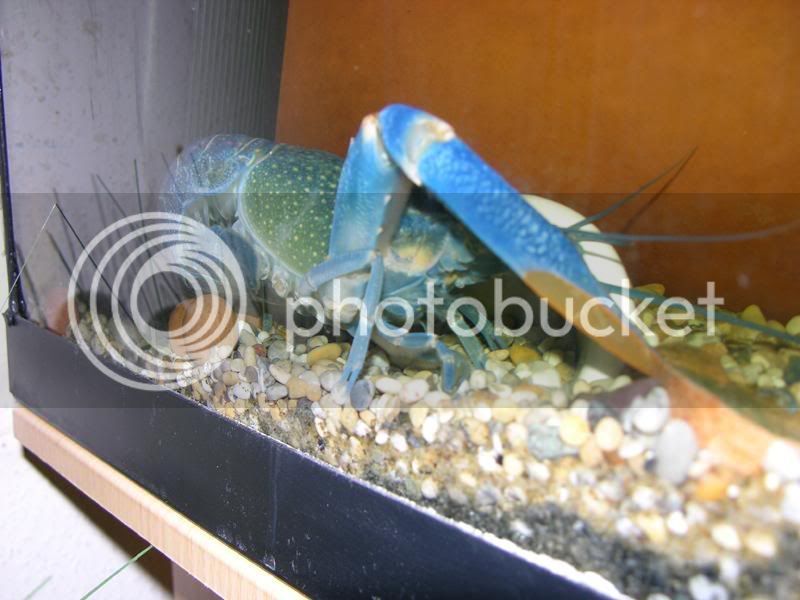 spamming my way to the top...

poor thing, is this the same lobster as before? im confused lol

But anyway, this should be a stickie :

so, are you giving her back, and keeping him and nurse him back to health? Am I right? Im a tad bit confused!!!

Thats such a shame, Ive just read this from the start and I though it was all going to have a happy ending, did you take her back to the shop?

Out of interest, how do you sex them?.....here is a picture of mine...Dr Zoidburg, can you tell if its male or female?

I've taken her back to the shop, she's waiting to go to a new home, she's the one I nursed back to health with the syringe. It was so sad. Yeah, I felt really bad cos when I had nursed her back to health I put her into his tank as it was bigger and he ended up getting attacked and losing limbs after he shed! De ja vu! I feel so sorry for him, I'll get him better, he's still scared though, he's been sitting in the same corner behind a flower pot for a couple of days now. He's getting there.

At first glance i'd say she's a she although it depends on age.... read on.

Sexing them..... the easiest way to tell the sex on this breed is a male has red on the outside of his claws and a female doesn't as you can see from my pictures. Although when they're young neither have red on their claws, it takes a while to come out so it's harder to tell. The harder way is by the genital openings, a male has them on the base of his rear most legs and the female has them on her third set from the rear. Sounds confusing, I had trouble at first. I'll try and dig out some pics, alternatively if you can post a pic of the underside of yours I could have a look for you.
OP
J

Right I managed to find a pic of my males underside (Excuse the size, wanted a good resolution), the red circles show the most obvious sign of a male. The blue circles is where the males.... bits, things are and the green circles is where the females openings would be. As you can see they are smooth on him but on my female I can remember there was a little round hole on each side. 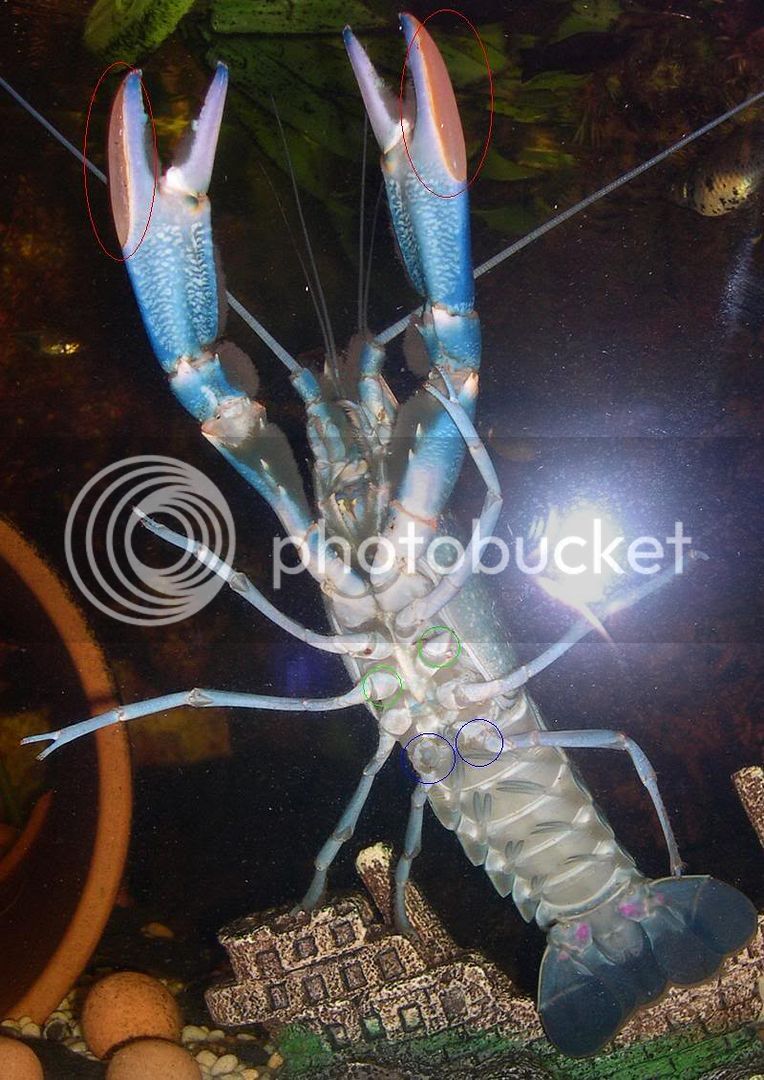 Thats magic mate.....I agreed that mine is probably a girl. since she is about 6-7" now with no signs of any red coulouration on her claws......Dr.Zoidburg could still be a girls name aswell I suppose.

How old is your male and roughly what size?

This is my second lobster (sadly my last one 'Pinchy' made a bid for freedom around the same age as the Dr.Zoidburg which is bought at about 2.5 - 3" and after 4 - 5 month she is about 6") any rough idea of age?
OP
J

Well from tail to claw tip I'd say he's about 8 inches and probably about 12-13 months old, we've had him 11 months now. Although it's hard to say on size as he's recently shed and still filling out his new shell, he still hasn't eaten his shed, I don't know how long I can leave it in there before it becomes a problem for the water, anyone know?
You must log in or register to reply here.
Share:
Facebook Reddit Pinterest Tumblr WhatsApp Email Link