How To Tell If Your Guppy/molly/platy Or Swordtail Is Pregnant.

Hi everyone, one of the most common questions asked is "is my guppy/platy/molly/swordtail pregnant"
In this thread I will attempt to explain very simply how to tell she is pregnant and how to estimate how far along she is with the aid of pictures, week by week.
I will be using guppies as the example because that's what I have!

Guppies, molloies, platies and swordtails are all known as livebearers. This means they do not lay eggs, but give birth to free swimming young.

The easiest way to tell if your female livebearer is pregnant is the shape of her belly. A female guppies pregnancy is around 4 weeks. I have had about 6 batches of fry and it's usually 28-30 days.
Lets begin.

In the first 2 weeks, you will notice some roundness but depending on the female and how old she is, shouldn't be too big.
Here is a female at the end of week 2 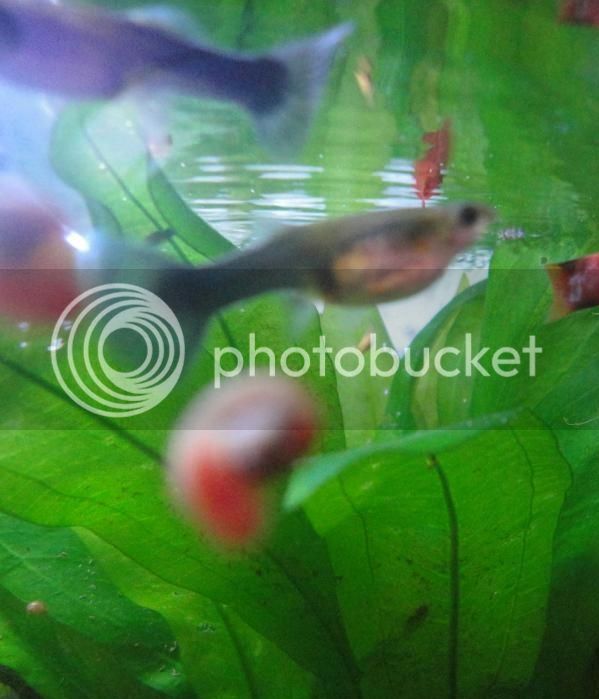 Week 3 sees her getting bigger still and more round. Be vigilent, if she is huge and round then she usually only has a week to go.
Here is a female in her 3rd week (on the right) and final week (left) starting to go square. 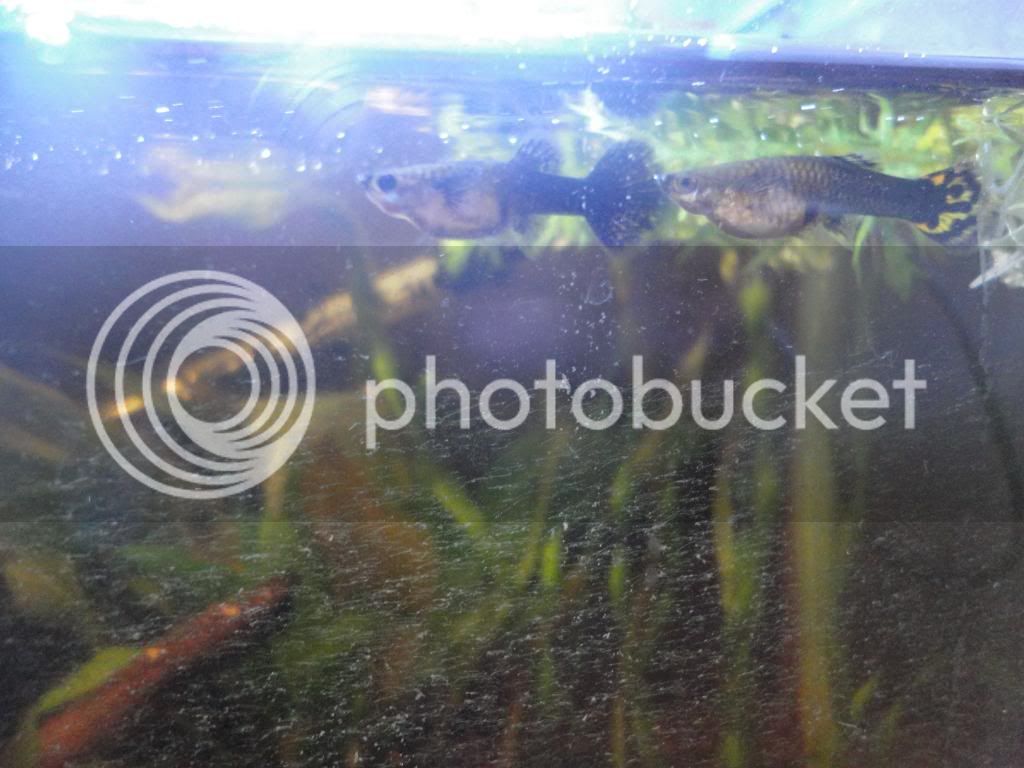 There is a term used called "squaring off" or "squared off" this is used to describe a female in her final stages of pregnancy. Once she is squared off it could be any time. The female will be hiding a lot, looking for a quiet place to give birth.
The males will be harassing her constantly too. Sine livebearers tend to eat their young, some people put the female into a breeding trap. This is another topic that has people divided.
I put a female who was ready to drop into a trap, she was so stressed out that she died.
I am not here to tell you what's right or what's wrong, just sharing my experience with you. I tend to let her have the babies naturally then put a plastic trap in and catch the babies with a turkey baster as they swim right out the net!

Here is my female starting to square off 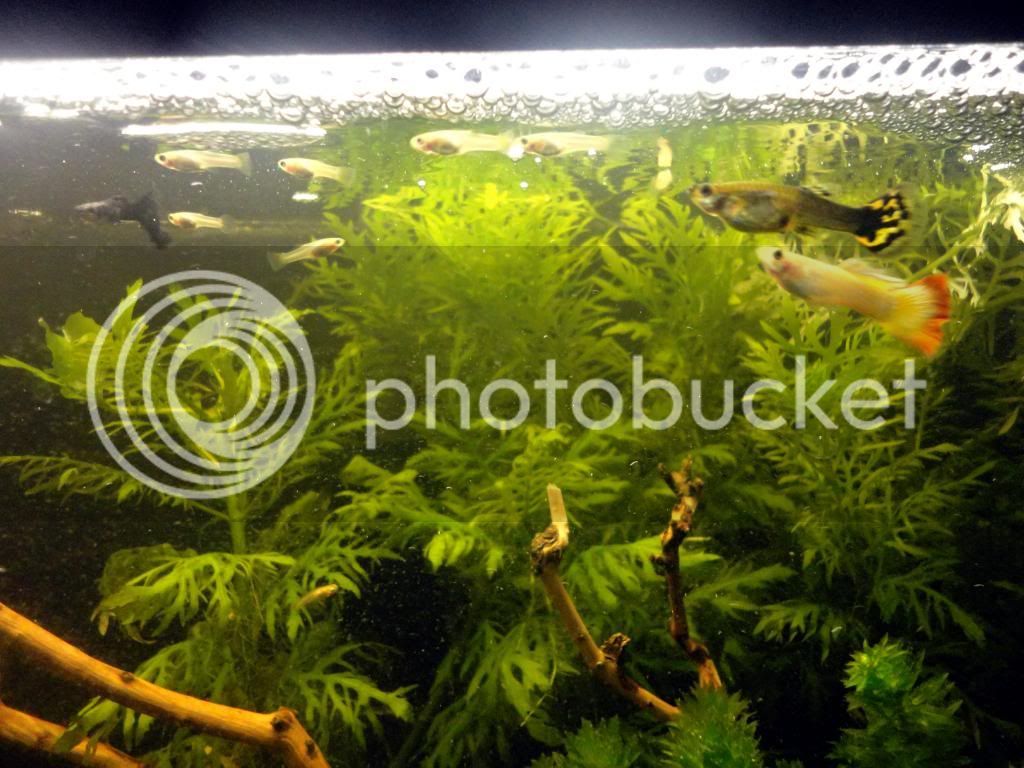 Once the female is square it's no long until she has them.  When the female has the babies, they drop to the bottom and stay still to avoid being eaten. They look like tiny tadpoles with fat bellies and googly eyes! If you catch them and put them in a plastic trap, a good trick is to cut old tights and put them ove the vents of the trap to prevent them escaping and also over the filter so they don't get sucked in.

Here is a newborn fry (at the back) 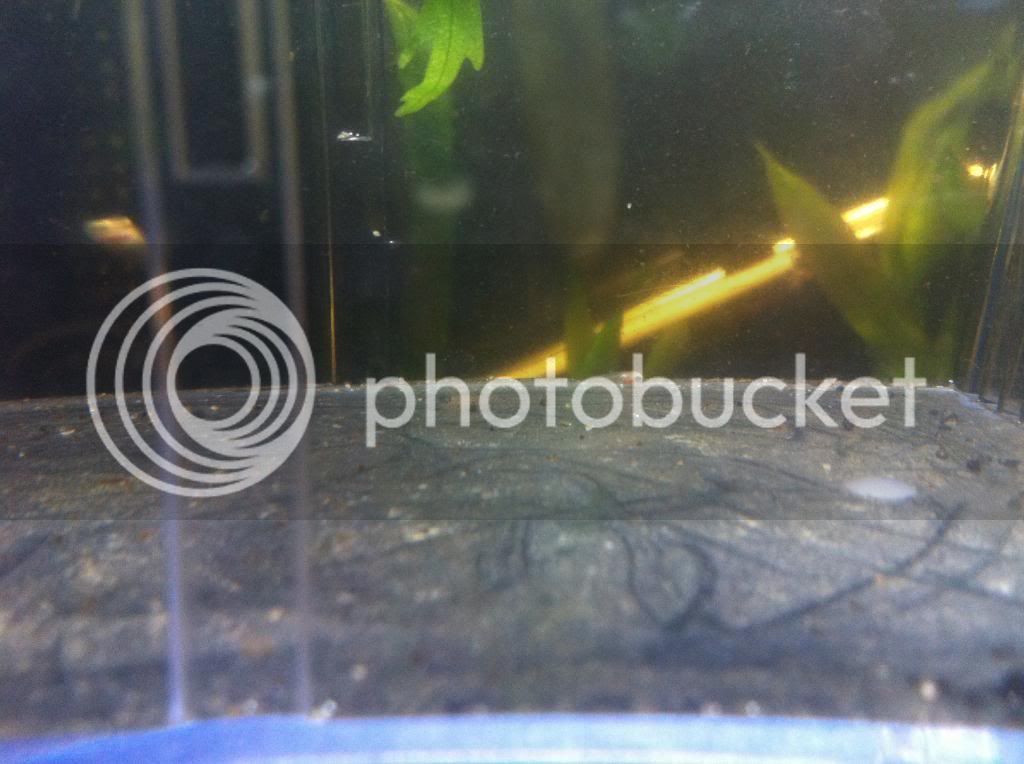 This is a very simple guide showing pictures because that's what people need to show the differences in the growing belly. Other livebearers are similar and they all square off when they are about to drop fry.
I hope this helps you, and good luck with the fry!