Hi. I have a fascination with Hermits and currently have about 15 roaming about in my tank. Quite a few of the ones Ive bought have just been labelled as Algae Crabs. Does anyone have a decent ID site for Hermits? I would really like to be able to ID the ones I have and ones I buy in the future.

Post some photos if you will. I can generally ID them pretty quick and I'm a huge fan of them so like to see pictures of what people have. I've never seen any labeled as Algae Crabs locally. To be honest our LFS's would get pilloried if they did so I'm very curious to see what crab it is. There are some hermits that do better at eating algae than others, like the Halloween hermit and the scarlet reef hermit but for the most part they are opportunistic scavengers.
OP

I will try and post some pics later, however I am slightly worried by them now, I have seen one attack another twice now. Usually I would think its just after the shell but there are about 20-25 empty shells in the tank of varying sizes and shapes.

They are black, or very dark at lest with a white ring around their legs. They dont seem to be any of the normal species you see for sale.

Definitely need a pic for a concrete ID.

There is really no such thing as this. All hermit crabs I'm aware of are omnivores and need meaty food.

They are black, or very dark at lest with a white ring around their legs.

As a first shot in the dark, if the claws are symmetrical, do a google image search for "Clibanarius virescens" (include the quotes) and compare. It's a less common species in the trade but shows up sometimes. They are also sexually dimorphic and courtship is often misinterpreted as aggression. If you are seeing crabs getting dragged out of their shells then it will be aggression for sure, but if it's just aperture-to-aperture contact with some shell clacking then it may be harmless.

It's a name I've seen show up a reasonable number of times both online and in-store, although as you said the stores that know their stuff won't keep that label when it comes time to write one on the tank even if it's what the supplier used for the order. Usually it's smaller Clibanarius species like C. digueti and C. tricolor, but if my memory is right I also saw Calcinus seurati labeled that way a couple times, so there is really no telling with that name. Doing a quick search just now to see what's going under the name online currently, it looks like Clibanarius striolatus may be in there as well (hard to tell from less-than-clear pics).
OP

Thanks for the replies, I would almost certainly say that they are "Clibanarius virescens" I have about 10 of these now. The aggression you mention as courtship sounds exactly right too as it is 2 specific Crabs. 1 keeps climbing on top of the other, and not dragging it out, it just keeps sort of jumping up and down on it, smashing its own shell into the others. I have pulled it off it 3 times now, and even considered taking the one on top out, may leave it now. I will get some photos up later definitely but the tinge of green is also in them so | am almost certain it's them.
OP

I do also have 2 or 3 of the Clibanarius tricolor but they are tiny. I did have 3 Scarletts but not seen the last of them for a while now, so worried they haven't survived for some reason. I also have 1 or 2 large Electric Blue Calcinus elegans and really love these, again though I have only seen 1 recently so worried by that.

I was behinning to think that maybe the newer ones Clibanarius virescens could be too aggressive for the other species. What are your thoughts Donya, you think this is possible? I would be a bity gutted as I want to try and get as many differing species of Hermit as possible, any rogue individuals can go to the quarantine tank.

Clibanarius virescens is incredibly peaceful from what I've seen of them. They are more likely to be bullied by other species than visa versa. I've got a bunch of C. virescens in with an "accident" Clibanarius species (the exact ID of which escapes me right now) that is very high strung and frequently runs up to other hermits to give them a slap, flip them over to assert itself, and then run off. The C. virescens never retaliate and also never seem to see it coming. What you've described for the within-species behavior does sound like courtship, so I'd let it go and just make sure that there are plenty of empty shells about as a precaution. About the worst aggression I've seen with C. virescens is males competing over a female, but it always seems to be settled pretty fast and without injury. That's one of those things that you just have to allow to take place in any long-term population as long as long as there are no injuries, since interfering will just prolong their efforts to establish a pecking order.

The empty shells are also particularly important given that this is a mixed-species environment, which are higher stress and more likely to go badly when resources are scarce. Make sure the shells stay clean, since often shells with sand in them are often treated like they don't exist even though the crabs are perfectly capable of lifting them out and rotating them to get the sand out themselves. Similarly, shells with bristleworms or other critters in them will be ignored. Regarding the missing hermits, there are lots of problematic cases of Paguriestes cadenati (which is usually sold as a red leg or scarlet) and Clibanarius tricolor having wars, so keep an eye on that combination. It's a commonly stocked combination but also the most common one that results in hermit genocides. The various Clibanarius are likely to be fine with each other (C. tricolor included) and the Calcinus elegans is also fairly peaceful.


I would be a bity gutted as I want to try and get as many differing species of Hermit as possible, any rogue individuals can go to the quarantine tank.
Click to expand...

Please don't...mixing species excessively is a recipe for disaster even in larger tanks. You already have a mixed species environment that will need more careful maintenance as far as ensuring that everybody is fed enough and provided for in terms of shells to make sure no fights break out. A separate tank for rogue individuals would be even worse for aggression and needless deaths. Although many hermits in the trade exhibit social tendencies (mainly the various Clibanarius species), most are NOT social towards other species and can sometimes act rather differently in their presence. Stick with the species you've got and stock more of one of the Clibanarius if you need to boost the CUC over time. Small Clibanarius usually mix without issue (the collection of body language gestures and other behaviors are all pretty similar; aggression looks like aggression and courtship looks like courtship), but it's pretty easy to mess up adding a wrong species to a tank and end up with a war - or sometimes just a mass murder by one individual in a short period of time.
OP

Cheers Donya, The shells aren't a problem at the moment as there are a lot in there, from very small to quite large. I wasn't aware of keeping them sand free though so I will look at that. I may just add a few more of the Clibanarius species then if I need to add anymore, although I do have a fair few for now, once the tanks upgraded I will definitely be adding more
OP

Here are those pics I promised sorry, as I say the Crabs we were talking about are almost certainly Clibanarius virescens but do you know what the Green one is?

The ones I think are Clibanarius virescens 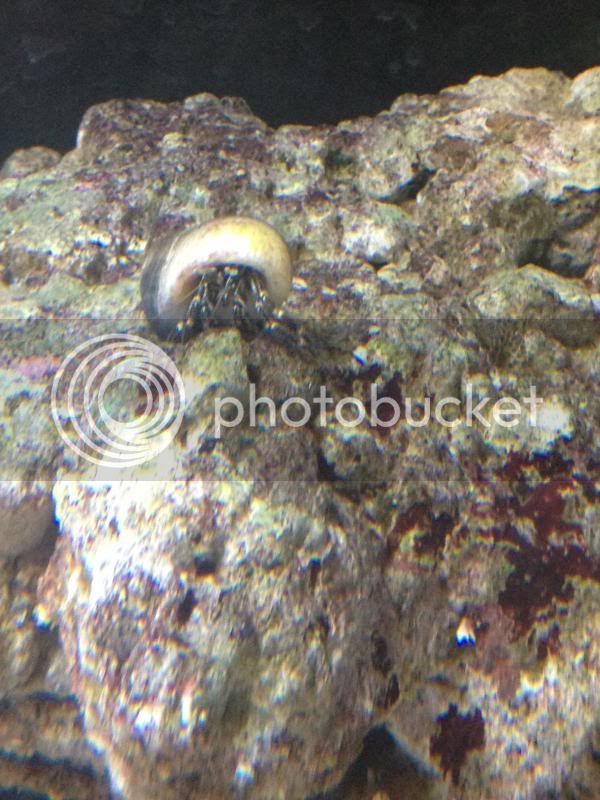 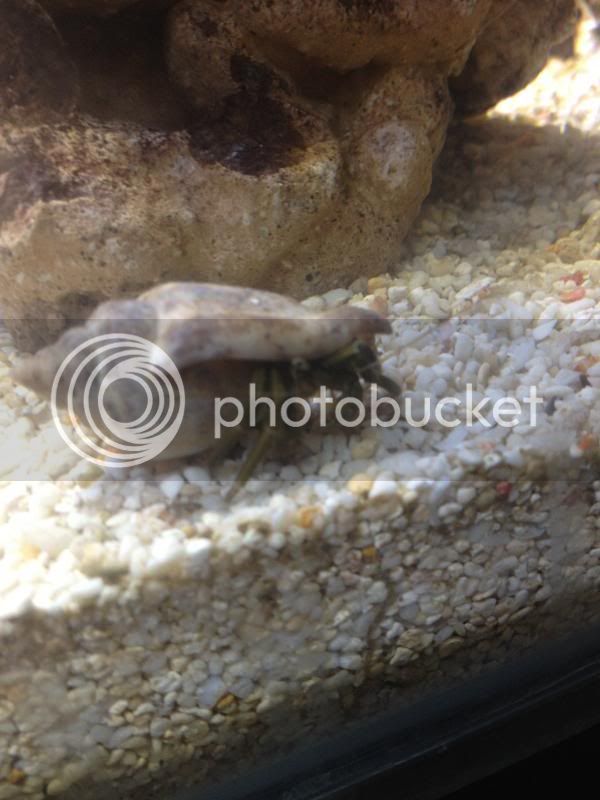 Top one is definitely not C. virescens but may be Clibanarius striolatus - also very peaceful but they grow rather a lot larger. The bottom one I'm not sure offhand; I think it's the same as my "accident" Clibanarius that I couldn't remember the ID of before (and still can't...I'll look it up though).

On a side note these aren't crabs that I personally consider "reef safe". There are some hermits that I totally trust with corals but others have been known to munch on them when they feel like it.

The little green Clibanarius is likely fairly safe assuming it's what I've got; if it's not the same then there's no telling. The max size of my little green weirdo is not much bigger than the more standard CUC species and the diet has been the same. I've found arbitrary Clibanarius to be far more reliable in the diet department than arbitrary species from other commonly seen genera like Calcinus and Dardanus. The main damage risk I've seen from various larger Clibanarius like C. striolatus is from the accidental damage factor, which is non-trivial enough that they don't belong in most reef tanks once they get past a certain size. They will try to climb corals, fall on corals, and right themselves by grabbing corals, which can break hard species and tear soft ones that aren't big enough to withstand the abuse. And then you just get some bizarre accidents that boggle the mind. For example: I once another of my larger Clibanarius (might have been a C. signatus; can't remember) running around the tank with an anemone engulfing most of a limb. That hermit, which has always been totally peaceful towards Coelenerates (ignoring falls) had obviously stepped in the middle of the anemone and gotten its leg sucked in, but was big enough to pick up and walk around the tank splatting the anemone-leg against things. Both parties were fine after I intervened, but that sort of bonkers event is more-or-less impossible with smaller species.
OP

Thanks for the info i will definitely keep an eye on them, however so far I haven't seen any mis-behasviour really except they do walk over a couple of my corals. They certainly dont pick at them, and as they are glued to the rock it seems fine at the moment
You must log in or register to reply here.
Share:
Facebook Reddit Pinterest Tumblr WhatsApp Email Link