Colin_T said:
How big is the silver fish in the 2nd picture?
Do you know if it had 2 dorsal fins, a small one further forward and the one in the picture?
This is exciting, it looks a bit like a female Iriatherina werneri (a rainbowfish found in Australia and New Guinea). But if it is, then you may have found a new colour form and an extended distribution range for the species. A bunch of people could be excited by this
Click to expand...

Do you mean this one?

I don't remember spotting anything pelagic with two dorsal fins. It could just be that I did't notice. The non-benthic fish that I saw all looked like Pearl Danios to me. But, I could have missed something. Looking at the photo, I was wondering if this was something different.

These fish were all about reasonable size for Pearl Danios. Similar to typical Eurasian Minnow size. They acted a lot like Eurasian Minnows too (I might have spent a fair slice of my life immersed in fresh water.)


Colin_T said:
The first pic has what appear to be some sort of freshwater goby. They could be a new species or someone might have found them a while back. But most gobies are not well known, nor regularly kept in freshwater aquariums.
Click to expand...

I think there might be two species in the first picture. The darker fish seemed to be acting like some sort of hillstream loach type thing. The others acted like gobies. I saw some larger ones earlier on but I don't know if they were captured by video as I had just (effectively, I didn't expect it to happen) chased some buffalo from the water and it was still cloudy. Later on I did encourage one of the fish that looked as if it might be some sort of hillstream loach to move by finger proximity. But, the fish was very small indeed and I'm not sure if it got picked up by the camera or not.

The fish that I encouraged to move looked and acted like the world's smallest pleco. And, yes, I know about Otos. This was smaller. Though, I think some Sicyopterus species act a bit like that. There definitely seemed to be multiple species of benthic fish. And, I didn't see the tiny goby (maybe) that was near black and had a well defined 'neon' line that I saw before.

MudMinnow said:
Do you mean this one?

I don't remember spotting anything pelagic with two dorsal fins. It could just be that I did't notice. The non-benthic fish that I saw all looked like Pearl Danios to me. But, I could have missed something. Looking at the photo, I was wondering if this was something
Click to expand...

Yes, it looks like a female Iriatherina werneri but if it doesn't have 2 dorsal fins it isn't. The mouth also looks slightly different, but it's still possibly something new to science. A lot of Indonesian islands haven't been surveyed for fish and new species are being found regularly.

The following link is of a female Iriatherina werneri but is well coloured and most are silvery grey, not the colour of the fish in the picture, which is breeding and has eggs coming out of her.

Colin_T said:
Upload it when you get home and we can watch it then
Click to expand...

Yes, I deleted my post once the upload stuck on 3%. My ship has left port and I think that internet will slow and stop quite quickly. I am very interested to see the videos as they look quite reasonable on the tiny screen on the back of the GoPro. Uploading to YouTube would have been a shortcut.
Last edited: Aug 3, 2022

This is incredible thanks for going back and getting the pictures so so good!

The gobies look like a Stiphodon species and with the blue stripe on the nose makes me think of Semoni or Atropurpeus?

Thank you very much. I found pictures of Stiphodon Semoni online and some have what I remember as the 'more defined' blue strip I saw on one specimen. E.g. this from the internet.

Also, the less coloured gobies often looked 'long' (one swims past the camera in a video). E.g. like the female here in (b).

The females of Stiphodon atropurpeous look less like what I saw in the stream/river, I think. Not as 'stripey', and not as 'long'. 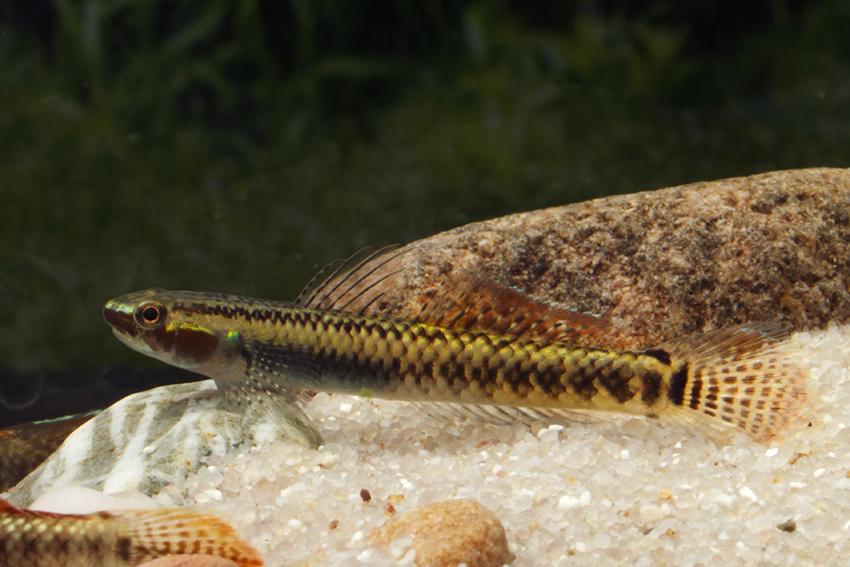 I'm now close to land again (hence internet). I might have another go at uploading video to YouTube tonight.
OP
OP
M

Not the best choice for the first video to post. But, here goes nothing.

The blue stripe intensifies on both genders when its breeding time but the difference is the colouring - the Atropurpeus is more neon and brighter. In aquariums the way to distingush the two (as the colour is subjective) is if the paired fins are clear or have a speckled appearance which isnt possible here obviously I have a group of them in my aquarium I think they are Atro's but not 100%

I had a look on fishbase and you do get Sycidium species in Indonesia which get bigger than Stiphodon but otherwise very similar. Stiphodon get 2-3 inches Sycidium get 4-5. Both species are really interesting as they travel pretty big distances in their lives, the eggs need to be in brackish or marine water to hatch and develop then they travel back up stream to freshwater to live and breed. The eggs are laid in freshwater and then washed out to the estuary.

Fantastic videos though! You need to put in proper titles and descriptions on them as a lot of people would love to find them! The biotope community is really big on YouTube and this kind of video will make their day!

I plan to title the videos and look into making them publicly visible and findable later.
OP
OP
M

Fantastic! One thing that made me smile was how cloudy it was, we work so hard to get crystal clear water and so few of our fish live like that haha!
OP
OP
M

Wills said:
Fantastic! One thing that made me smile was how cloudy it was, we work so hard to get crystal clear water and so few of our fish live like that haha!
Click to expand...

The water was very clear the previous time I visited. Unfortunately when I visited the second time I found a number of domestic water buffalo enjoying the water. They got out and left when we arrived but the water took some time to clear.

MudMinnow said:
The water was very clear the previous time I visited. Unfortunately when I visited the second time I found a number of domestic water buffalo enjoying the water. They got out and left when we arrived but the water took some time to clear.
Click to expand...

I mean that just sounds awesome! Its a bit of a bucket list thing for me to visit somewhere that means I could do this - top of the list is Lake Nicaragua to see my favourite fish but bit of a sketchy place and it also has Bull Sharks in it as well.
OP
OP
M

A bit better here, but I think the best videos are still to come. A brief shot of a dark goby with a colourful stripe at about 0m 32s. What might be a stripey long female goby on a rock at about 2m 44s
Last edited: Aug 4, 2022
You must log in or register to reply here.

E
HELP! How to save fish

Is ammonia killing my fish?