Fish cut in half but seems fine??

I have a group of baby honduran red points that are growing up. Earlier this month the smallest of them showed a lot of damage to her tail, it was basically gone, so I removed her from her siblings into my least aggressive tank. Never saw her again and I believe she died and was eaten by my mystery snails, as she had been swimming very slowly and had labored "breathing". I thought her siblings had gotten together and attacked her. It just surprised me because I have never known the adults to be so aggressive, have never made a mark on each other at all.

Now I see another, also a very small one, who is missing the last third of her body. There is no tail and the stump has turned bright white. past that, her body is black in the middle, and past that, normal from the gills to the head. See pics. Unlike the other one she really seems fine, swimming and breathing are normal except that she can't propel herself using her tail.

I don't think her siblings could have done it. I do have an apistogramma who I never see eating dry or frozen food. Possible he has been eating the babies, going for the smallest first? I removed him in case...

I did have one danio die of dropsy a couple weeks ago and wanted to post this in case it is actually some disease! It really seems like she will make it, though.

Any advice appreciated, SO MUCH!

Picture of the fish? I might be able to help you, if I had a picture.
OP
OP
S

Yes! Was just emailing them to myself, hehe.

Hard to get a pic of her, because recently she has been hiding in the "forest"--a dense clump of moss. But she really seems very active, as vibrant as the others. I have been spot feeding her and she takes food.

First two are the injured fish, last is a healthy sibling for comparison. 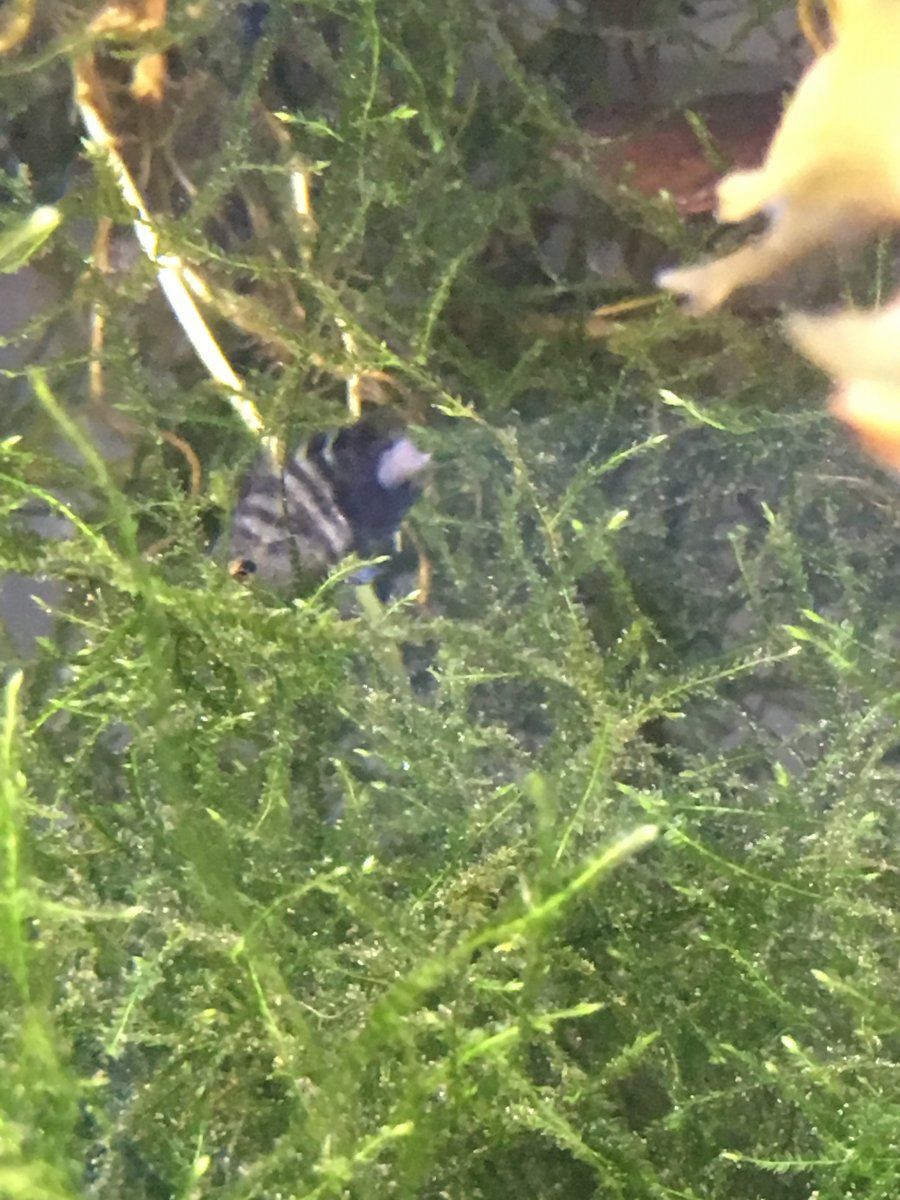 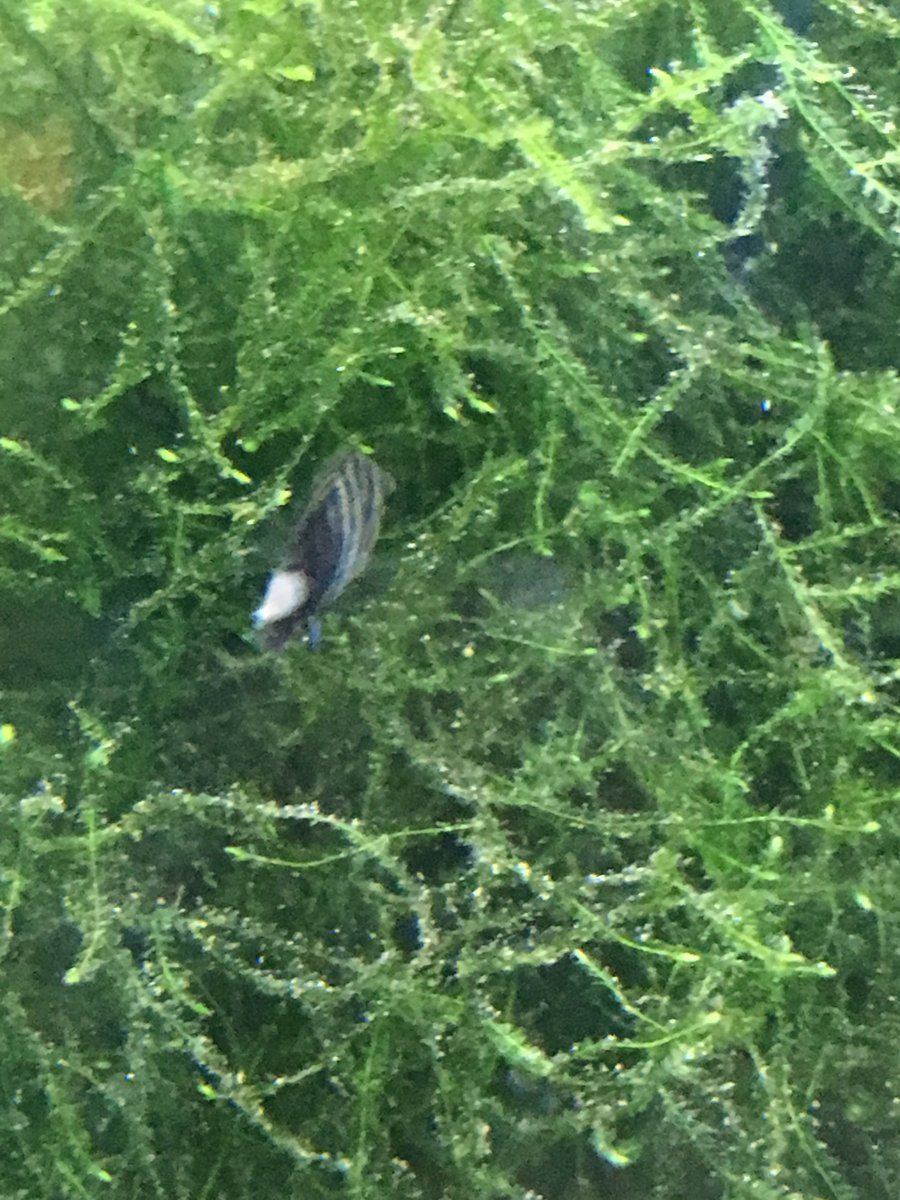 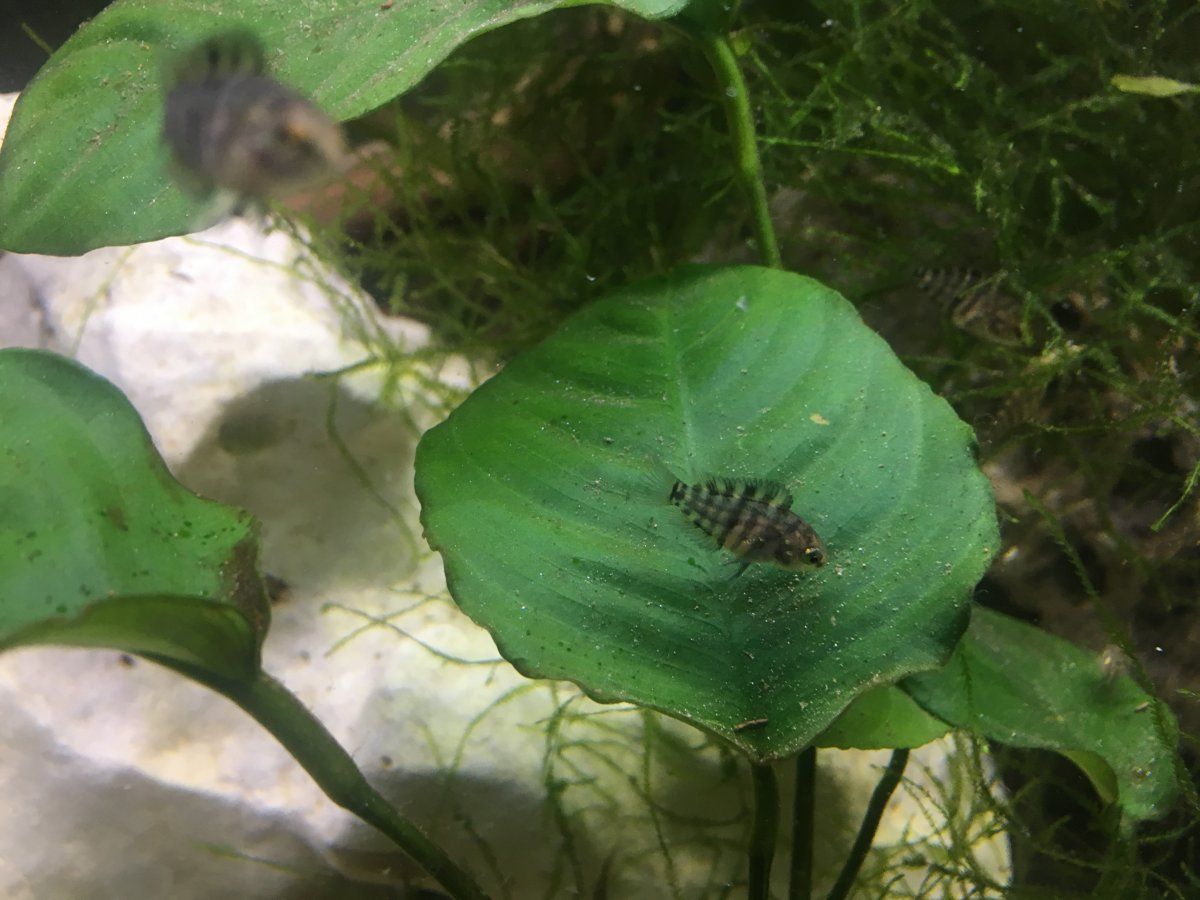 What kind of fish are they again?
OP
OP
S

Although their mom definitely has some convict in her

I’m sorry, but in the picture above, I can’t tell which end of the fish is which! Will you please edit it, and circle the “wound” thank you.
OP
OP
S

Sorry, they are such bad pics. It is hard to focus the camera with her hiding in the moss, but I will take more later today. 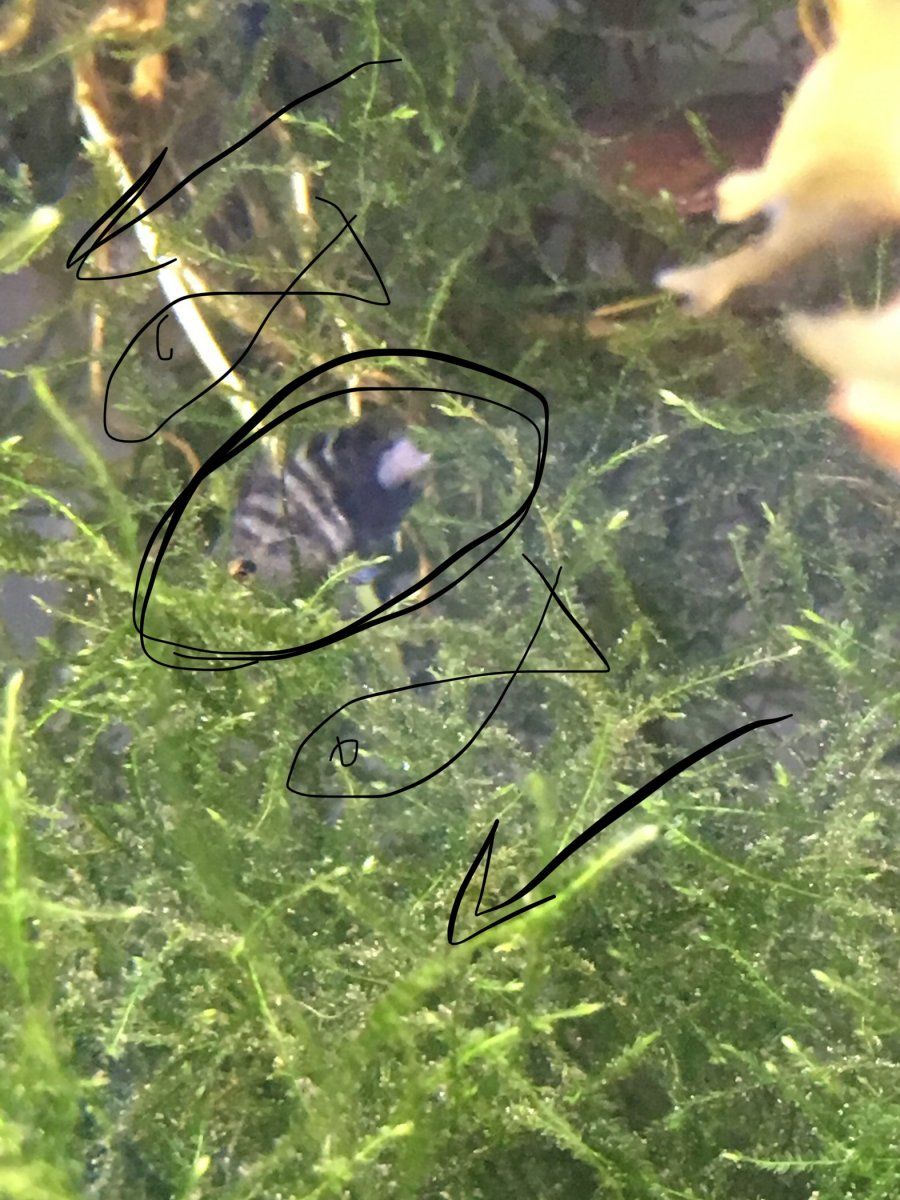 ^ in this first pic, she is swimming down and to the left. Whole body circled. The bright white mark is where the tail should start, and leading up to it is blackened. the body should be about 1/3rd longer if her tail was intact. 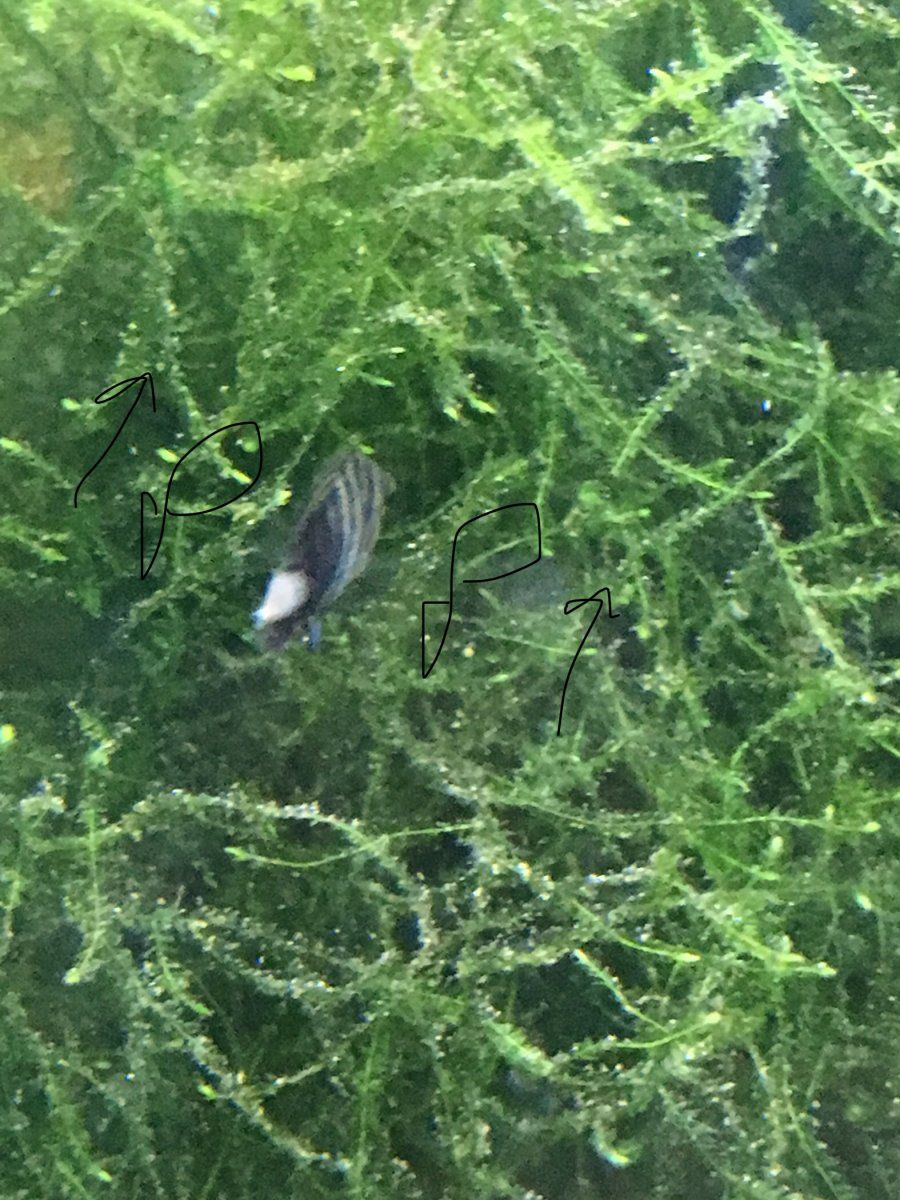 ^^^ in this one she is basically swimming directly away from the camera and slightly to the right. White tail area is closest to the camera.

Now I see it! If the fish is swimming fine, I see no reason why to be worried. How long ago (approximately) did this happen!?
OP
OP
S

Couldn't have been very long. I only noticed it two days ago.

The blackness around the wound worried me but it doesn't look like it has spread much over the past couple days.

I'm glad! I really hope she makes it. I will update here with pics when I take them!

Sounds good! I suggest you do a 50% water change, and maybe give her a salt bath. Good luck!

Something chomped on her. Can you put her in a QT TANK? If this breed can handle salt then I would treat her with about 1 teaspoon of aquarium salt per gallon of water. This will help keep the wound clean and promote healing. You want to keep the risk of infection down. Do daily water changes and add back the amount of salt you removed. Example: If you remove 1/2 gallon of water then replace 1/2 teaspoon of salt. Depending on how much of her body was removed, her tail may grow back. Doubtful, but possible. It obviously didn’t cut the body enough to injure the organs. Really interesting! Anybody else?
OP
OP
S

Please let me know how to do a salt bath!

When my danio got sick, I treated him immediately with reef salt thinking it was the same. then i read that that was a mistake. i think he was already too far gone, but if not im sorry bud :'(

You’ll want to use aquarium salt. I would leave her in it, not just baths. Get a plastic storage bin if you don’t have a quarantine tank. About a 4-5 gallon one will be fine for her. Make sure it has a lid, filter, and heater. Drill holes in the lid for oxygen. Fill the tank with dechlorinated tank water that is the same temperature as her original tank. Put one teaspoon of aquarium salt in for each gallon of water. Let the salt dissolve completely and then put the fish in. Leave her there until she is healed. Change the tank water daily to promote healing and reduce the risk of infection. If you change 50% of the water then add 1/2 the salt back in. Good luck! Keep us posted.

NO! Not Epsom salt! Epsom salt is for pulling fluid out. Please don’t do that to this fish. You need aquarium salt.
You must log in or register to reply here.

Anyone ever use fresh water scuds for live fish food?