So last night I spent hours moving my fish and setting up a new 75l (20gal) aquarium which was an upgrade of a 34l (<10gal) one. One of my Serpae tetras has been severely fin nipped and has difficulty swimming around. I was wondering if I was able to put just that one tetra into a small qt tank under my main aquarium with a powerhead I have had media in for a few days running alongside my aquariums?

My tank details are as follows:
75l Aqua One 510
100w heater
Filter in the hood with extra ceramic noodles and ~150g of activated carbon also extra.
Under-gravel Filter System
Stock:
- 7 Serpae Tetras
- 3 Silvertips (yes, I know I need more but I was waiting for the 20gal)
- 1 BN Catfish
- 2 Kuhli Loaches (I got these yesterday with the tank)
- 1 Male Guppy (I got this yesterday with the tank)
Lots of live plants!

So the other thing I was unsure about it when I had all the fish together in my QT tank yesterday for a few hours when I was setting up the new tank, the guppy was fin nipping the steering fins of all the other fish! It was going crazy swimming up to them attacking them for a few seconds and moving on to the next one! Now that the tank is set up I have it in a floating separation tank and every time I let it out it goes straight back to fin nipping. Will it always be like this? Should I just get rid of it? Should I keep it in the QT tank forever by itself? I normally empty it when not using it by the way, and just move a small power-head from my main tank into the little tank.

Basically I would just like to know I can separate the sick tetra for a few weeks while it regrows (hopefully) it's fins and gets some colour back into it? I just don't want to stress it out being the only fish in that tank. 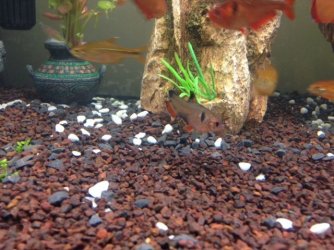 Above is a photo of the sick fish, it has been like that for a few weeks now.

ok so this will take a while but put the tetra in a breeder box as big of one as possible therefor he will still get the light which he needs for his coulor etc.. once in the box make sure he is out of the way of a power full filter stream or currents so hes not stressed in there then every day for a week put 2 te spoons of melafix in the tank not whilst feding becausae u want it mixed through thethe whole tank after three days in the box let him out in the big tank again u should see some fin growth and thats all u can do three days in the box and melafix for a week
You must log in or register to reply here.