I personally would be worried about the chemicals in the foam, surely as a minimum there will be a fire retardant in there. that will leach into the tank over time
OP
E

I repainted with the same drylok cement because the salt had drained all the color from it and eaten through several layers of concrete. A week later I gave it a coat of Krylon Fusion. Some places are very hard to reach (very close to the glass) and so I know for a fact that, despite my efforts, there are spots that I missed. I probably covered 95% of the concrete. I let it dry a few days then filled the tank. In 10 hours it went from 6.4 to 7.8 pH. I guess I should still wait until tomorrow morning to see if it stops going up, but it's not looking hopeful.

Before I give up, could my pH issues have anything to do with my water? Maybe the buffering capacity of my water is low? I don't have a kH test kit, but the fact that my tap water pH is 6.4 may indicate something.

I know it may seem like an irrelevant point, but the person who wrote the tutorial and many people who used the tutorial didn't have a problem with pH. What did they do differently? He mentioned his pH is consistently 8.2 out of the tap. Could that indicate something?

Would adding sand to the aquarium help? Or would that just create another byproduct that raises pH? Can I use a water softener like this one sold by API? I don't have a GH test kit, either, but since it's in part a measure of calcium in the water, it would probably be quite high.

Something must be different. I might make a few blocks of cement with different colors and do some experiments. Right now I want to try water from different towns, different concrete colors, adding sand, adding pH buffer, and maybe different water pHs. If anyone has any thoughts on other experiments to do, I'd be interested to hear them.
OP
E

The pH held steady overnight! Going to do some water changes and see if pH consistently goes to 7.8 and holds, or if the tank just needed a more thorough rinse than what I had already done.

I've never used concrete because, as others have mentioned, concrete can take a month or more to fully cure, and even then it might never become fully stable. I know what you mean, though, @EmilyS . I've seen people use concrete for everything from backdrops to fish ponds. It is rather maddening when you try to replicate someone's project, get wildly different results, and don't know why. I have no solutions for this one except to with you good luck!

cdelly said:
I personally would be worried about the chemicals in the foam, surely as a minimum there will be a fire retardant in there. that will leach into the tank over time
Click to expand...

It's the extruded insulation foam (pink, blue and green)...has no fire retardant chemicals in it. Nor does the expanded (white bubbles) foam.
OP
E

I'm going to keep posting updates here in case someone else who is in the same situation finds it.

It seems like putting a coat of Krylon Fusion on 95% of the concrete did not fix the problem, it just delayed it. Or something. My pH still spikes, it's just not consistent in when or how much.

It also took ages for the spray paint to dry. I left the tank to dry about 48 hours. It still smelled like paint when I filled it, but I assumed it was just the tank that wasn't getting aired out well enough. (Note to other people doing this: the tank won't smell once the paint is dry). The tank smelled like chlorine from the uncured paint, and I ended up emptying the tank and leaving it to dry five more days. It stopped smelling on day 3/5.

I filled the tank and left it. The pH started at 6.4, and 36 hours later it was at 6.9. 48 hours after the initial filling, it was way higher. I didn't actually bother to use the high pH test, but it was at least 8.2. I suspect either there were lots of bubbles on the concrete preventing the water from reacting with it, or the water needed time to soak in and reach the coated concrete.

Now that I have a likely cause, there's something I think I can try. According to the wikipedia page on Calcium Hydroxide (slaked lime), Ca(OH)2 dissolves in water, raising the pH to up to 12.4. Ca(OH)2 may then react with CO2 to produce Calcium Carbonate. Calcium Carbonate is not soluble, unless it reacts with more CO2 to form the soluble Calcium Bicarbonate. As far as I can tell, Calcium Bicarbonate does not change pH and is not harmful to fish? In any case, you can remove it from the water by doing a water change.

So would adding CO2 to the tank speed up the stabilization? I've been soaking the background without a filter running because that requires half the amount of water. Maybe that was also a contributing factor since it significantly reduce air exchange? Either way, I think I'm going to try adding CO2. There is a risk that the calcium carbonate will form on the cement itself and turn the whole structure white, but I haven't really got anything to lose.

I was intending to set up a CO2 system and make this a planted tank at some point anyway, so I went ahead and bought the supplies that Joey suggested in his DIY CO2 system video. (If it doesn't end up being useful in this tank, I'm sure I'll end up using it somewhere else.) It cost me about $60, but if you only wanted it to stabilize your tank, not as a long term planted tank solution, you could probably manage $30 or less.

These supplies arrive on Monday. I'll set it up at some point and post another update then.
S

EmilyS said:
Now that I have a likely cause, there's something I think I can try. According to the wikipedia page on Calcium Hydroxide (slaked lime), Ca(OH)2 dissolves in water, raising the pH to up to 12.4. Ca(OH)2 may then react with CO2 to produce Calcium Carbonate. Calcium Carbonate is not soluble, unless it reacts with more CO2 to form the soluble Calcium Bicarbonate. As far as I can tell, Calcium Bicarbonate does not change pH and is not harmful to fish? In any case, you can remove it from the water by doing a water change.
Click to expand...

The Krylon Fusion does actually seem to have solved the problem!

Shortly after my last post, the water in my tank got very cloudy and disgusting. There was clearly a bacterial bloom that was probably the cause of the pH spike. I emptied the tank, rinsed it, and refilled it completely. I also ran a filter on it to keep it cleaner. The pH went up to 7.4 and then stopped and was stable for a week.

I added gravel and put a pair of danios in it for 24 hours and watched them carefully. They seemed very happy in their new tank. It's now been set up and cycling for two weeks without any issues!

Thanks for everyone's help!
OP
E

As a last bit of information, I did experience another pH spike a week or two later from my CaribSea Eco-Complete substrate (it seems my tank is cursed when it comes to these things). It was pretty significant, but none of the fish seemed to mind at all.

In researching a bit more, I found this post with a very informative email from CaribSea explaining why they think it happens. Long story short, occasionally a few bits of their red gravel are covered in a coat of limonite, which dissolves completely into the water within a few weeks.

Interestingly, they said this: "The phenomenae is temporary and appears to subside sooner with the use of CO2." This would suggest that the addition of CO2 to remove lime in cement could be viable. A chemist I know thought it would probably work, but that you would end up with calcium bicarbonate (very water soluble) not calcium carbonate (partially water soluble?). In other words, the water's lime dissolving capacity would be increased, but water changes would still be required to remove the calcium bicarbonate.

I have been working on a underwater waterfall for a few weeks now. Made from cement and foam. I highly recommend using Pond Shield epoxy liner for anyone looking to use concrete/cement in their tanks. It’s relatively easy to use, gives it a nice gloss coat, and goes on clear (if you get the clear version), also keeps the ph from raising because it coats the cement in an epoxy that is 100% safe for aquatic life. 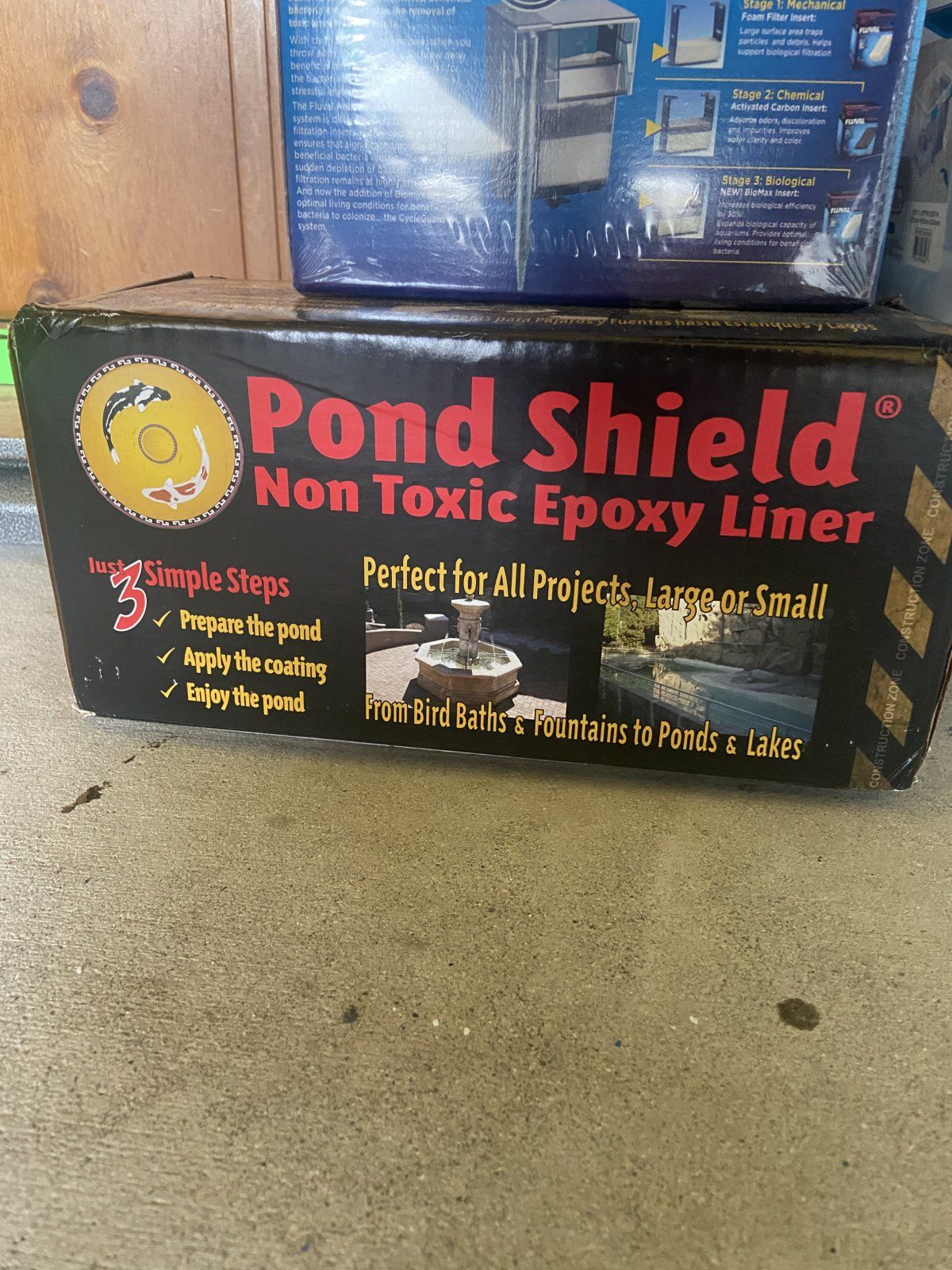 Do let us know how this turns out!! 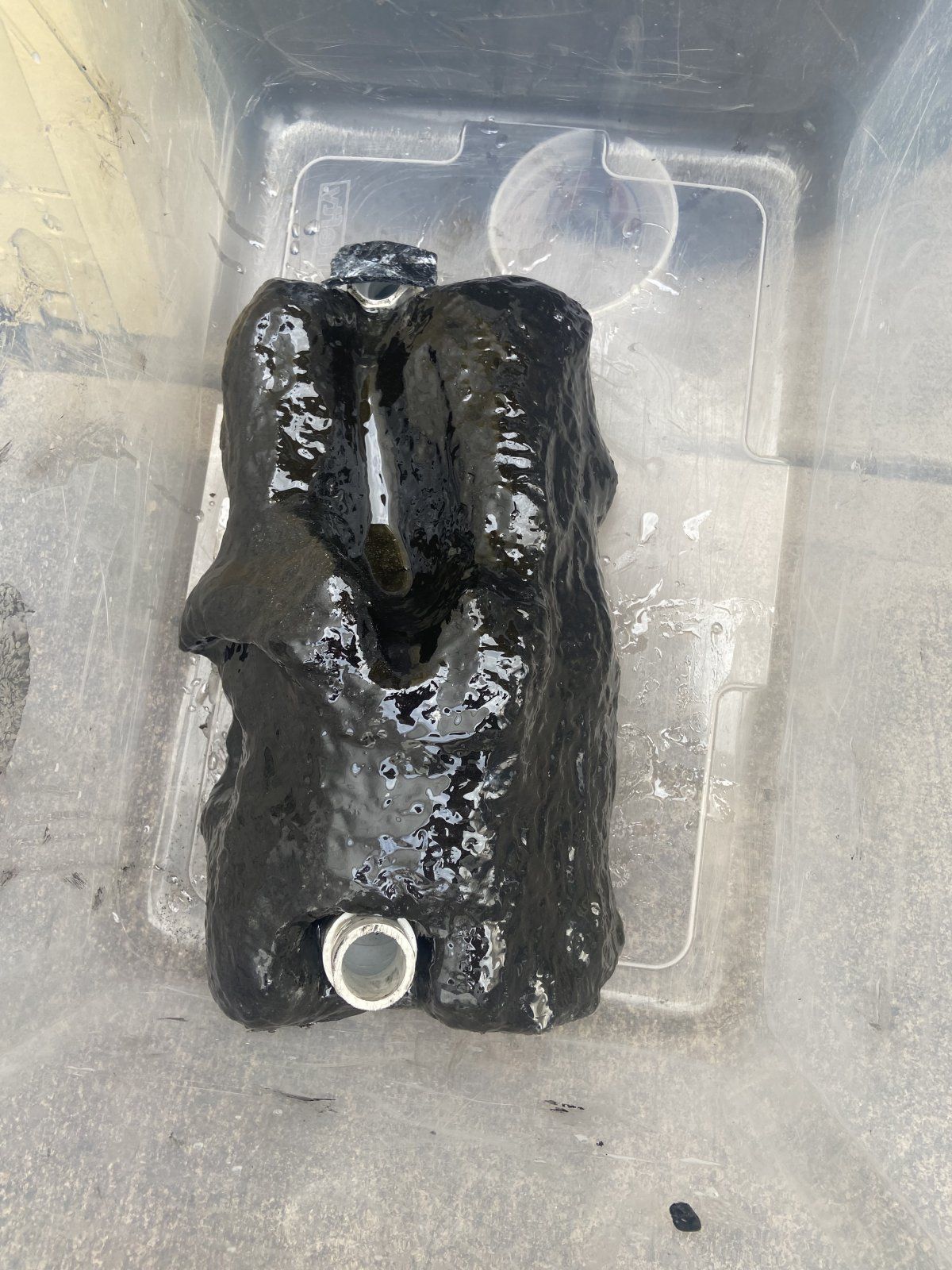 After putting it in the tank the first time around the intake for the sand wasn’t flowing like I wanted, and I ended up breaking the airstone off in the pvc, so I had to take it out for repairs, and in doing so dropped and cracked the snot out of it, so here it is after the crack repair and another round of epoxy coat. All drying now. Should be ready to go into the tank by tomorrow afternoon 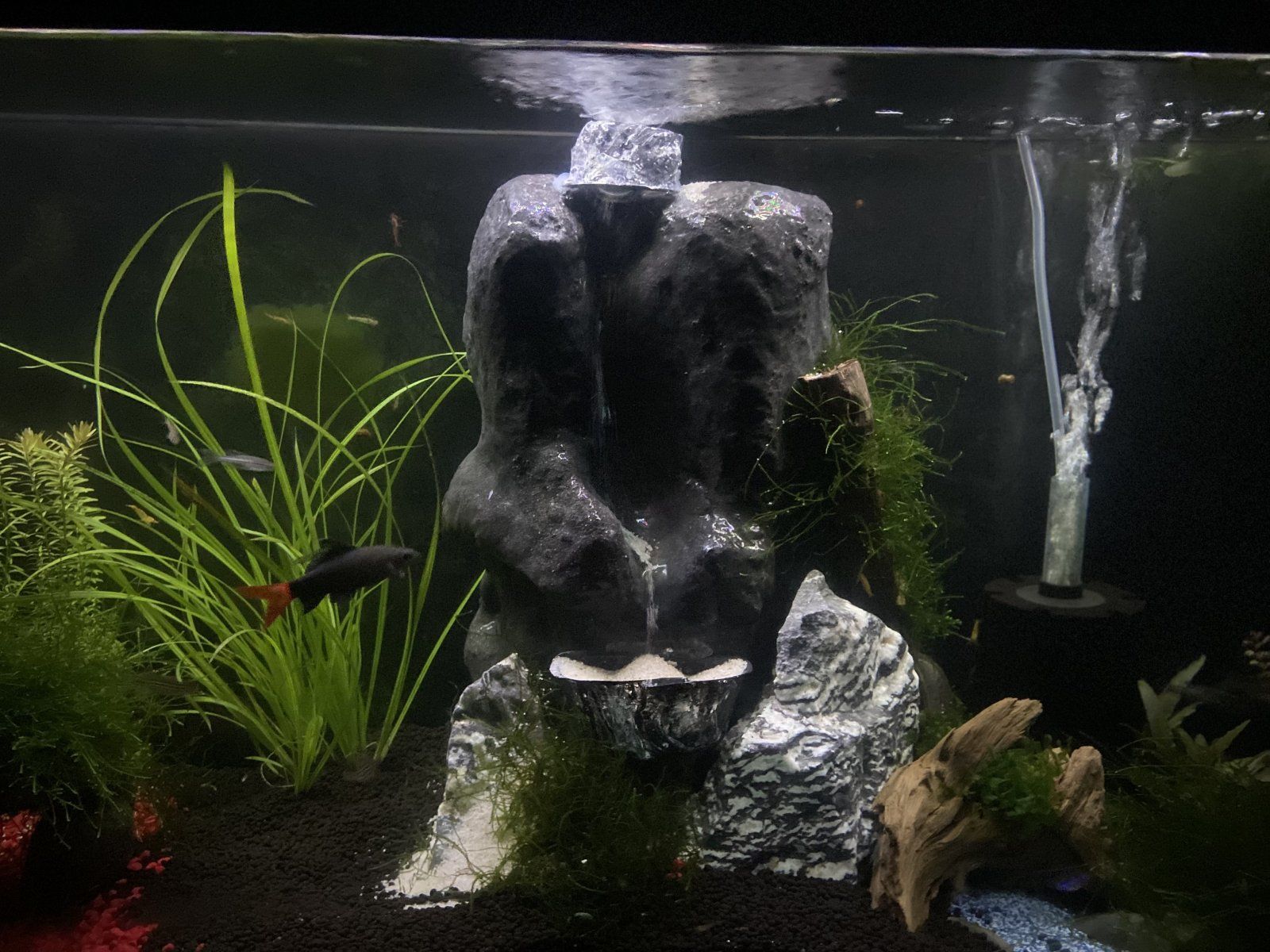 Here it is, all finished up.
You must log in or register to reply here.