I know I’ve done a few of these regarding fish that would be okay but I’ve finally decided what I really want.

I wasn’t sure if this would be considered overstocked in an aquarium or not so I decided to ask for help and suggestions. It will be sand substrate and fairly planted. Any and all comments are welcome. Thanks!

Yes, it would be overstocked. There’s quite a few temperature incompatibilities as well.

What is the species of the diamond head tetra? Is it just a diamond tetra?

I’d reccomend reining it in to two schools and the pearl and ram. You can also switch out the electric for a Bolivian which would be much more compatible with the schoolers or just swap out the schoolers. Something like this perhaps-
1 pearl gourami
8 neon tetras
8 cherries
1 Bolivian ram

What are the tank dimensions (length x width x height)?
What is the pH and GH of the water?

All tetras and barbs need to be in groups of at least 6 and preferably 10 or more. These fish naturally occur in groups of thousands so even 10 is a small number.

Pearl gouramis can reach 4 inches and might eat neons. If you want a gourami then look at the smaller species like sparkling, Indian banded, thick lip or honey gouramis. Do not get the common dwarf gourami (Trichogaster lalius) or any of its colour varieties because they carry 2 main diseases (the Iridovirus and Tuberculosis), neither of which can be treated.

If the tank is long enough and the water is suitable for the fish listed, you could do most of those fish but leave out the gourami. From a temperature stand point, set the tank on 25C (77F) and it should be fine for the ram and the tetras & barbs.

The tetras, barbs and loaches would be fine but I would leave out the ram and gourami. You could have 10 of each species in the tank (10 neons, 10 cherry barbs, 10 emperors & 6-10 khulis), assuming the tank is well filtered and has an established filter on it.

Female pearl gouramis are generally peaceful and don't eat small fish if grown up with them, but there is no guarantee on any fish. 99% of them will be fine and 1 might go nuts and kill everything in the tank.
OP 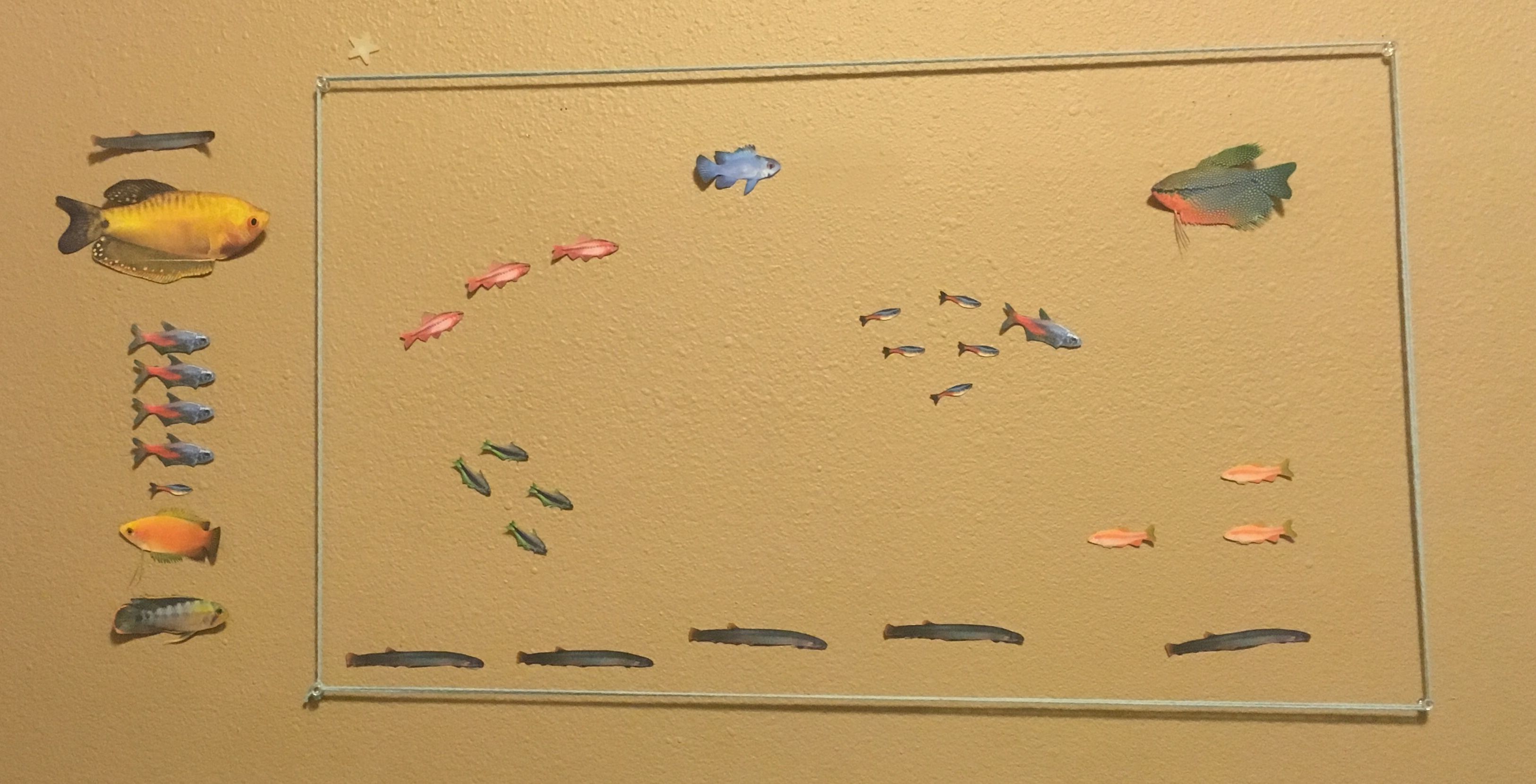 I made a frame the exact size of the aquarium on my wall and posted images of the full sized version of each fish. It didn’t look too crowded but I wanted to make sure. I’ll see how things would look without the gourami and ram. They all have tape on the back so I could move fish in and out to see which combo I liked best. This is the original combo inside the aquarium frame (made of thread)

Did you do the adult sizes of the fish? Because most of those look awfully small for adults...

It’s also not just about the size of the fish alone, but the swimming room, the bioload, and parameter compatibility. Having 3 adequate schools with two centerpeices in a 29g is far to much IMO. I believe you could do two schools and temperature and size compatible ram and gourami, but not three schools.

I also notice in your diagram that most of the fish do not have proper schools, so this combined with the fact they aren’t accurate sizes will not give you a good idea on if, by size alone, it’s to much. And like I said prior, you shouldn’t just stock by size, but also the other important factors.

I agree with what Roden and Colin have posted. How fish interact with each other, with other species, and within the confines of any aquarium is something difficult to explain, and certainly something that is not well understood generally in the hobby. The actual metabolism and functioning physiology of a fish directly relates to all of the environmental factors. The aquatic life is completely different from that of any terrestrial animal in how the fish/animal "lives." I try to explain this so often and finding the words to get the concept across often evades me.

Actually they ARE accurate sizes. I measured each to make sure the sizing was accurate before I put it up. Also each are peaceful fish and a pH of 7 at 77 degrees should be fine. While I understand swimming room and bioload might be a problem, each schooling fish is in groups of at least 5 (didn’t print enough emperor tetras) which should be fine if upgraded to 6. The Kuhli Loaches have a small bioload so I think shey should be fine. The diamond head neon tetra should school with the neons like Cardinals do if scared. I’d be fine with getting rid of a school, I just think if anything I should get rid of the cherry barbs, as each get fairly bigger than the emperor tetras and other schooling fish. I’m just trying to make sure everything goes well and stays that way.

I've re-read this thread but am not certain just which fish are now being considered, so I will comment on issues with the initial list.

First, another member mentioned differing temperatures and that is an issue that will impact fish significantly because temperature drives a fish's metabolism and even 1 degree can make a difference. Rams need warmth, at 80F/27C minimum. This will cook the neons (these have 75-76F/24C as their maximum upper limit), while both the cherry barbs and Emperors will be at the upper limit. The Pearl Gourami will be chilly at the highest neon temperature, so these two do not work aside from the "eating" issue someone mentioned.

Temperature ranges for fish species (from reliable sources) usually assume mid-range as the "norm," with the species being able to manage at the upper and lower limits but not permanently.

If any sedate fish like gourami are intended, I would leave out the Emperor Tetra; this species is somewhat active, and can get a bit feisty sometimes, but enough that I would not consider them suitable. Sedate fish do not appreciate active swimmers around them. Neons are not active, and cherry barbs are unique among barbs for not being too active, though if you really do want a Pearl Gourami, you should look more to some of the rasbora which are idea tankmates.

As for numbers of a shoaling species--six is generally mentioned as minimum, with some requiring more. But whichever, it will always be better for the fish to have more; they expect this, and reducing numbers can cause additional stress, and that means a weakened immune system and shorter life.
You must log in or register to reply here.
Share:
Facebook Reddit Pinterest Tumblr WhatsApp Email Link

Today at 6:21 PM
Freshwater Sucker Fish
F
M
Do Nerite Snails need to eat calcium or just have it in the water?

How to tell if your Molly/Platy/Guppy/Swordtail is male or female!