Why oh Why do these two tanks look so different! 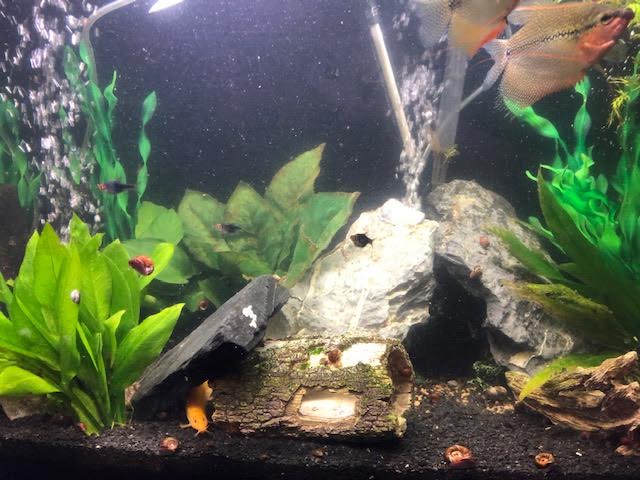 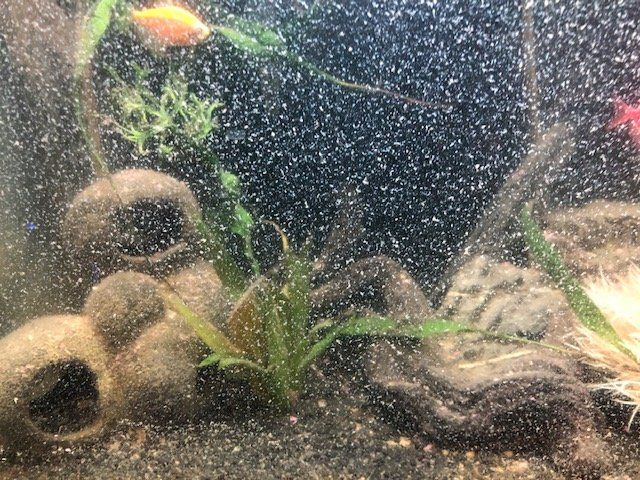 Sorry this is so poorly written but we're doing a water change later today and would like at least a couple comments:

The first example is 'TANK A" the second example is 'TANK B" both taken today about 4 hours after feeding - the debris you see on the ground in both tanks is mostly empty snail shells as well as some pellets the night dwellers are busy eating now. ( I have 2 dojo's in each tank and it turns out they eat snails! )

Anyway these are both my 29 gallon tanks and both had the water changed last Thursday and both will have there water changed today (this afternoon). At that point Tank A will be cloudy for about 30 minutes and then beautiful again and Tank D will be cloudy for about 4 hours and be beautiful for a couple of days and slowly turn this color. Both tanks will have a bad smell to the water with tank D smell-able all over the house I believe this is a dead snail smell because if you put some dead snails like these in a bucket you get the same smell but tank D smell is far, far worse.

The ONLY difference is that Tank A is Acrylic and Tank D is Glass. I have another Acrylic tank that is 50 gallons and it's always crystal clear just like Tank A. Also --obviously Tank D has some weird algae on the sides and in the water. For as much work as we do to clean our tanks each week it is an embarrassment, I think the fish hate it as well - because, while Dojo's and other Loaches are the great partiers of the fish world my Dojo's and loaches in tank D are jumping for joy like nothing you've ever seen (they also love the downpour from a bucket of water even though it could knock them unconscious)

So what is growing on the sides and all throughout the water in Tank D? Now one time after cleaning we barely had this problem in tank D because we emptied and re-filled tank D TWICE. Now our cleaning procedures are pretty good - drain about 80% of the water *depending on the size of fiish, Every item in the tank is removed and scrubbed off with a brush to get rid of any dust or snails, Walls are all scrubbed down well - this stuff in tank D comes off fairly easy but you sure notice if you miss a spot. Plastic plants are moved as needed and real plants wiped down and dead leaves removed. Filters are cleaned every week.

I couldn't tell you right now what the water parameters are - but we use a Neutral Reducer to get the water as close to 7 as possible and far away from the 9+ readings of my cities' water. If we did a water change with only prime we'd have a tank of dead fish due to Ph 9. This stuff works whether the Ph is too high or too low but I've had trouble with it working when the PH goes too low - this always happens about 5 days after the water gets changed, It will start out close to 7ish then slowly the Ph will move down until it's in the upper 5's. It's a horrible hassle and scary game to play with Neutral Reducer. One time we THINK we may have added too much of it during a water test and had a massive die-off *or we forgot to add prime but my assistant swears she did. We also use prime to inactivate the ammonia and nitrites and it appears to be safe. In the end we get Ammonia, Nitrites equal to zero as usual and the Nitrates about 5-10 for some unexplainable reason. The PH's will differ between each tank as low as 6.5 and as high as 7.4. I used to test it and adjust it daily in all the tanks but finally stopped worrying so much and all our fish have survived even though the PH varies by the day. I pretend they are just sailing into new water or jumped a puddle into new waters. I'm sure it happens in nature some of the time.

So any cure to this kind of growth? I know many people don't change their water weekly like we do and those that do I'm sure wouldn't tolerate this scum in their tanks just a few days after cleaning it!

Hmmm - I wonder if one of the ornaments in the tank is disintigrating (all my ornaments are specifically to be used in fish tank but that doesn't mean they don't break or start dissolving a year later.

Do both tanks have the same fish in?

I
Broke down and rescaped the 150