​
PLEASE VOTE NOW
We have 9 awesome pets entered into September 2021 Pet of the Month Contest. View all the pets and descriptions below and then go to top of page and click on your choice for POTM and then click the "cast" button.

Poll will close on September 30th at 4:30 PM ET (US).
Thread will periodically be cleaned up for readability.
We at fishforums.net thank you for your participation
Last edited: Tuesday at 12:08 AM 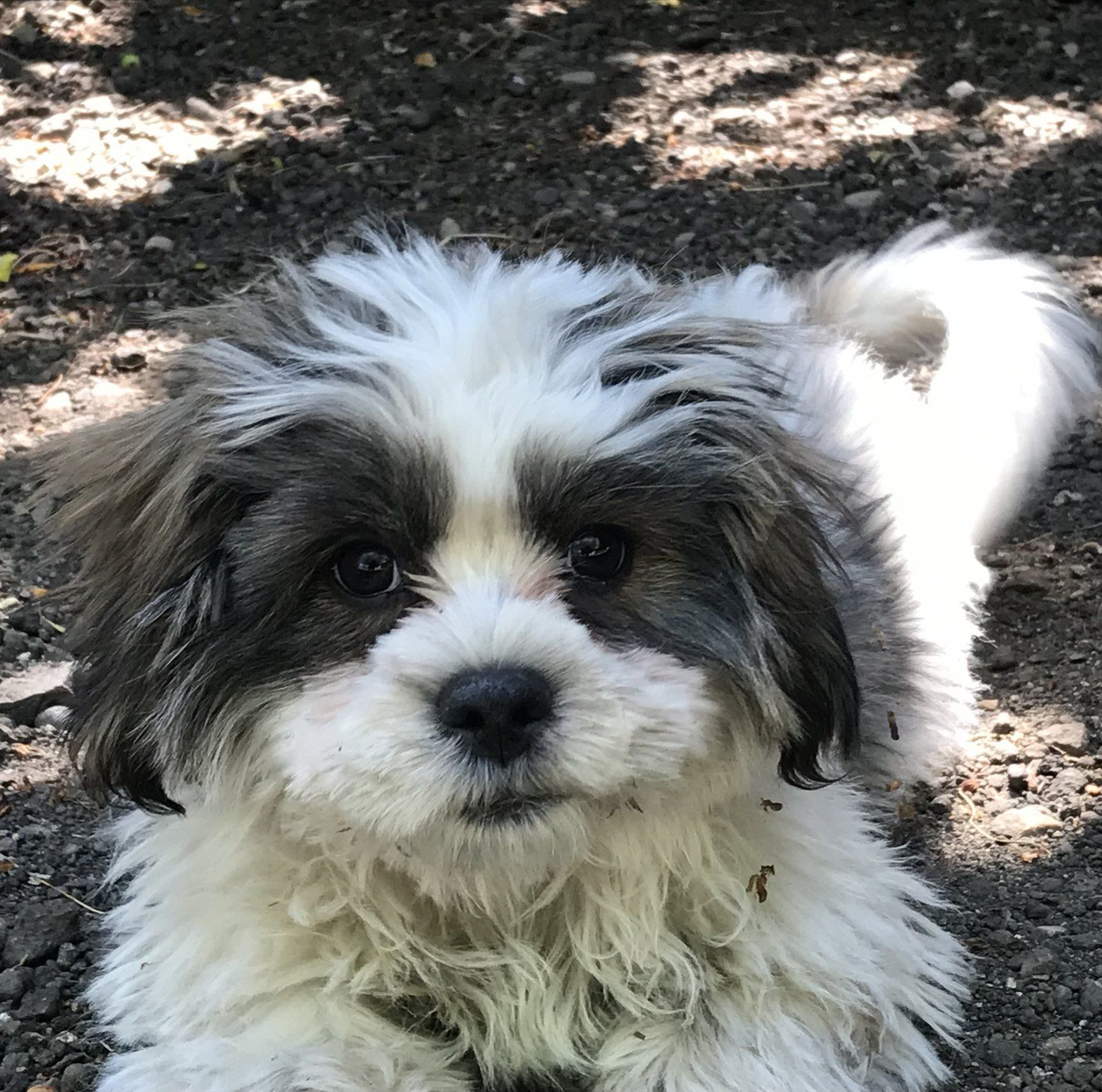 This is Cookie. She is my grandma’s puppy. She is just the cutest. She is super loyal and well behaved. She is snuggly and just LOVES anyone who wants to be friends.

She can be super outgoing, but is also very timid when she gets nervous (usually around other dogs or in strange places).

I help with grooming her and I baby sit her sometimes (I live with my grandma), but she is technically not mine. Her loyalty is towards my Grandma. When she gets scared, she runs to her first. I’m second on the list of humans. XD This little puppy is such a joy though. She is such a little grunge, haha. She loves rolling in the dirt, playing with the hose, chasing the mower. She’s got spunk, that’s for sure. But so sweet.

She is about 8 months old now I believe. My Grandma bought her from family friend that had a litter of pups needing homes, and of course no one could say no to this adorable little face.
Last edited by a moderator: Sunday at 8:37 PM

This is Tanana, a holland lop rabbit! 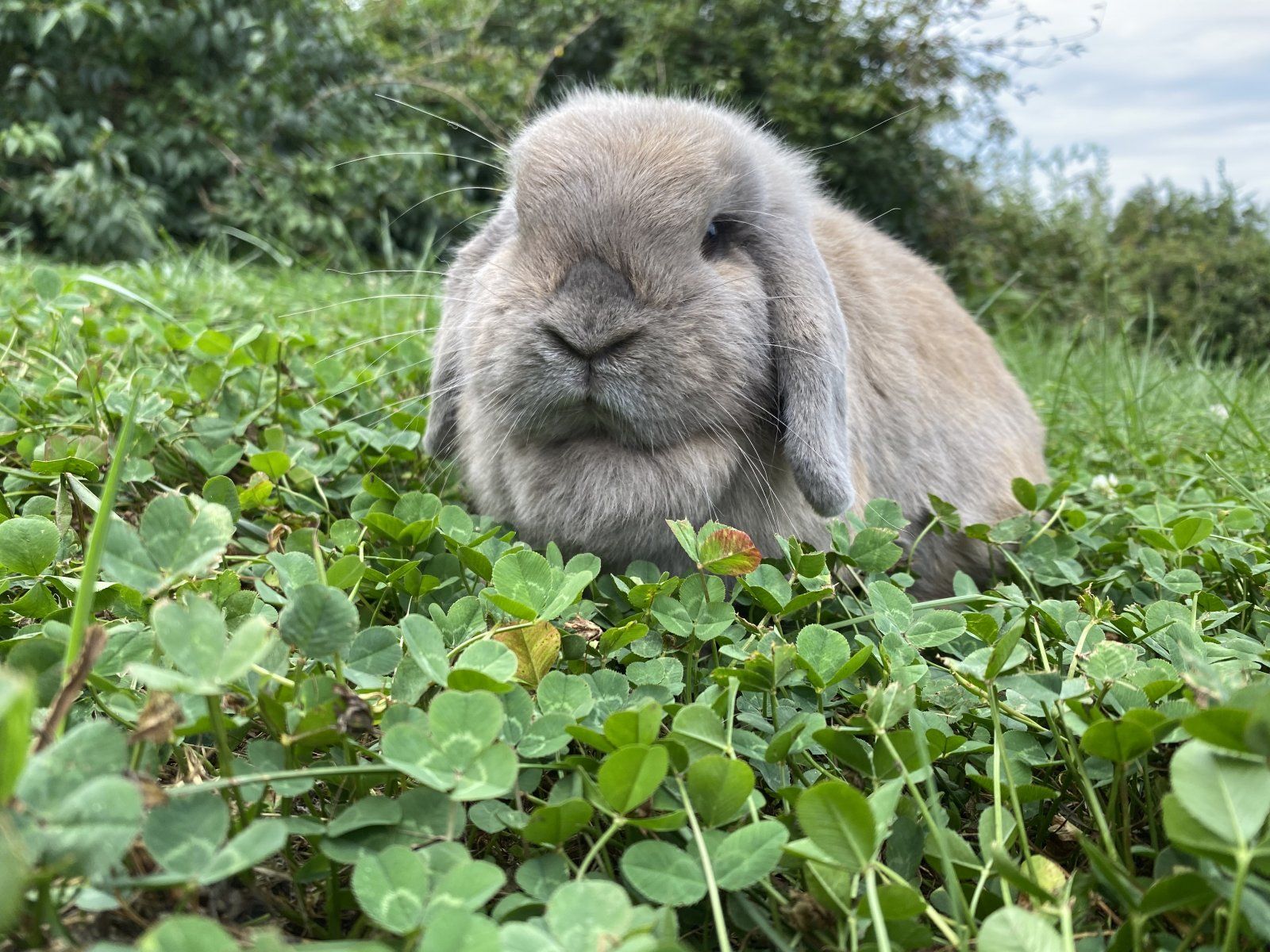 My younger sister and I raise holland lop rabbits together. Tanana and her sister, Talullah, were from our very first ever litter, and we grew very attached to them. We kept them both for almost a full year, but neither ever had a litter so we listed them for sale, in the hopes they would find pet homes by the time they were too old to have a litter. A woman contacted us, saying they would go to such a loving home, she would have them spayed, and they would be so loved and well taken care of, but that she couldn't afford the asking price plus the price of both their spays, so we agreed to a very generous discount. I regretted selling them immensely, we missed them. Over 5 months later, I was scrolling through craigslist newly listed (I didn't even search for anything) and there is the picture of my Tanana, not only that, but it was my picture that I took with my mother's phone!!! I was horrified and clicked into the listing, thinking someone stole my photo. Then there's more photos and it was them! It was Lula and Nana, and they were for sale. I immediately contacted the seller and lined up a time to meet and purchase them. We asked questions and found out that the woman who bought them originally was lying, she was a buyer-seller and immediately sold them after she got them. She never had them spayed, and sold them as breeding rabbits. The next owners bought them and bred them, but both lost almost their whole litters due to age related complications. We bought Tanana and her sister back, and they're living here with us as pets for the rest of their days!

Tanana is 18 months old, eats Blue Seal Show Hutch rabbit feed, timothy or orchard grass hay (depends on availability), banana, and cilantro. She doesn't know any tricks, but is really affectionate. She loves to run around and explore, and will lay in my arms and chill. I am so happy to have her back, and we will not be letting her go again!
Last edited by a moderator: Sunday at 8:37 PM

This is Ryko my tri coloured Jack Russell.
He's 4 years old, born on boxing day.
He's fed on dry food for breakfast and a mix of meat and biscuits for lunch.
Loves his treats too, favourites being sweet potato chicken bites and chicken fillets.
He is very loving, clever and loves his rope toys for fetch.
Last edited by a moderator: Sep 14, 2021 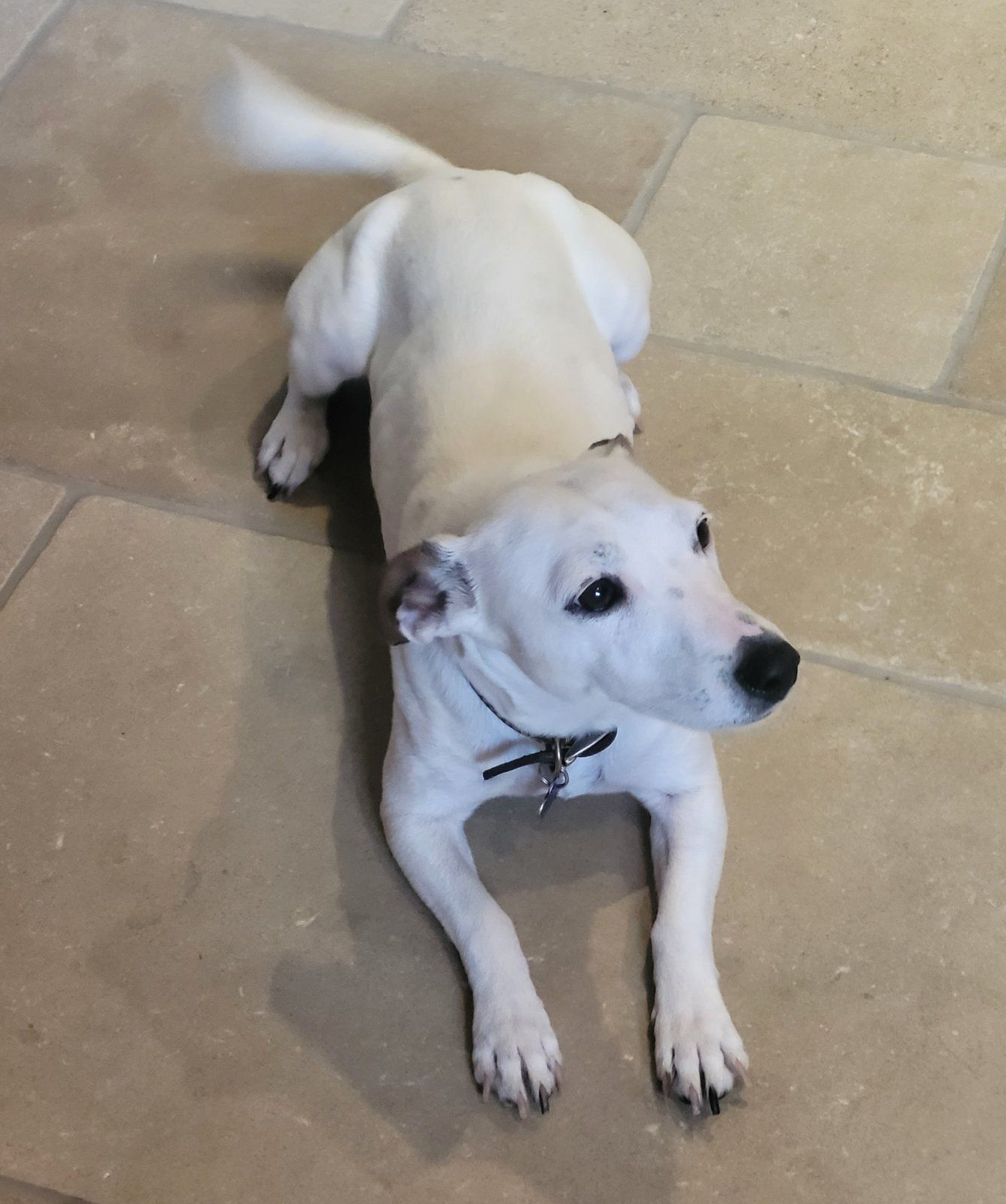 This is my beautiful girl Margot. She's a 2 year old Jack Russell Terrier who we rehomed earlier this year.

She is extremely gentle and loving and adores cuddles on the sofa. Despite her gentle nature she's afraid of pretty much everything, I don't think her previous home prioritised socialising her and unfortunately we've been left with the hard task of desensitising her.

She loves to play in the garden especially so if it's with a squeaky tennis ball much to the delight of our neighbours!

Margot has been a wonderful addition to our family after losing our beloved sausage a few months back and has given us that love we so sorely missed that only a canine companion can give ❤
Last edited by a moderator: Sunday at 8:38 PM 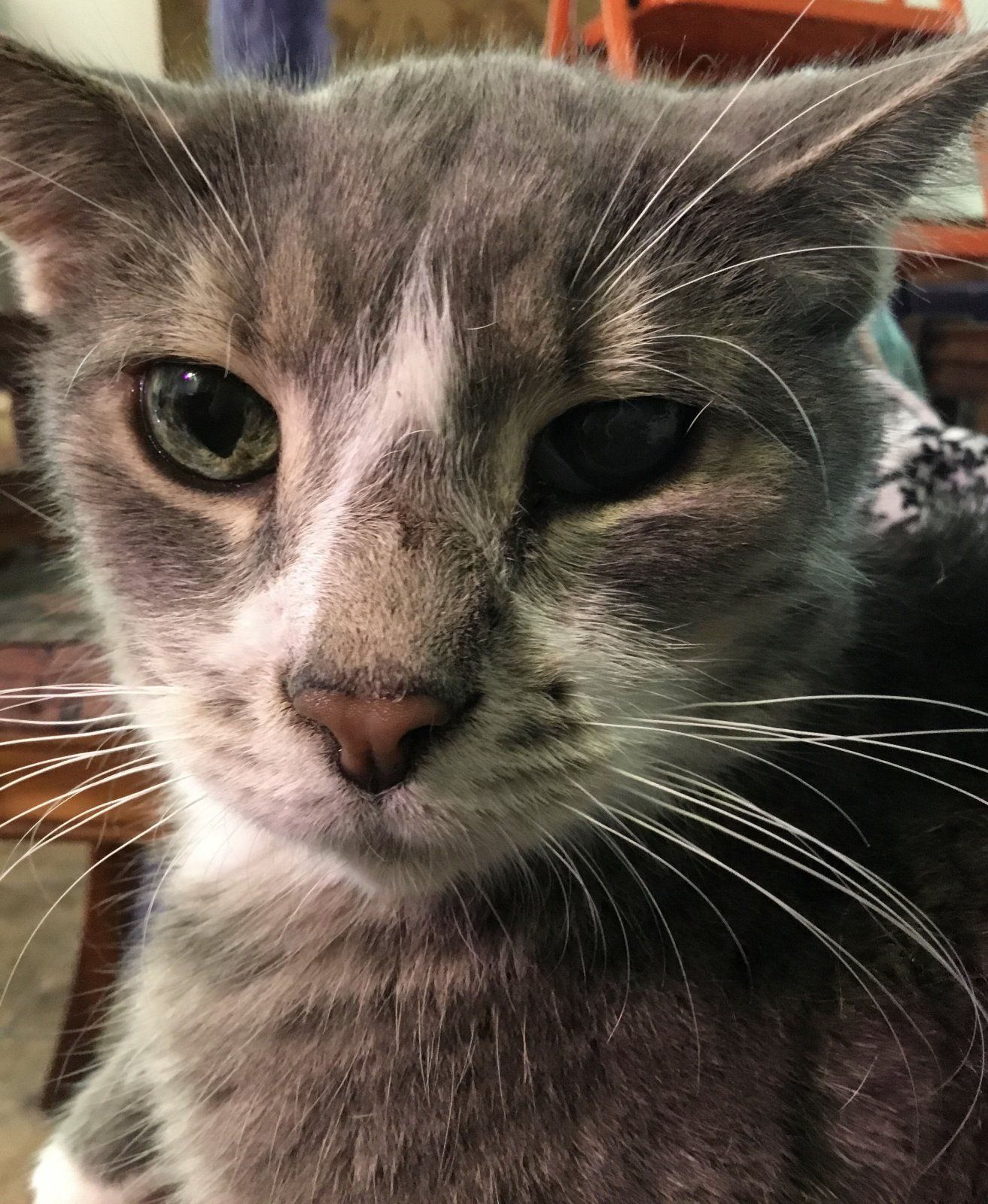 My cat, Mario. We adopted him from the local humane society ~13 years ago when he was 6 months old. Mario was born blind in one eye and required surgery, not to correct the vision which was impossible, to repair his eyelid. His eye was sewn closed when we brought him home & we returned a few weeks later for suture removal. This handicap has in no way slowed him down. He is the most agile & active of my 3 cats. Also the most affectionate. He loves sitting on my lap rubbing his adorable little face against the iPad.
Last edited by a moderator: Sunday at 8:38 PM

Location
Why must you know 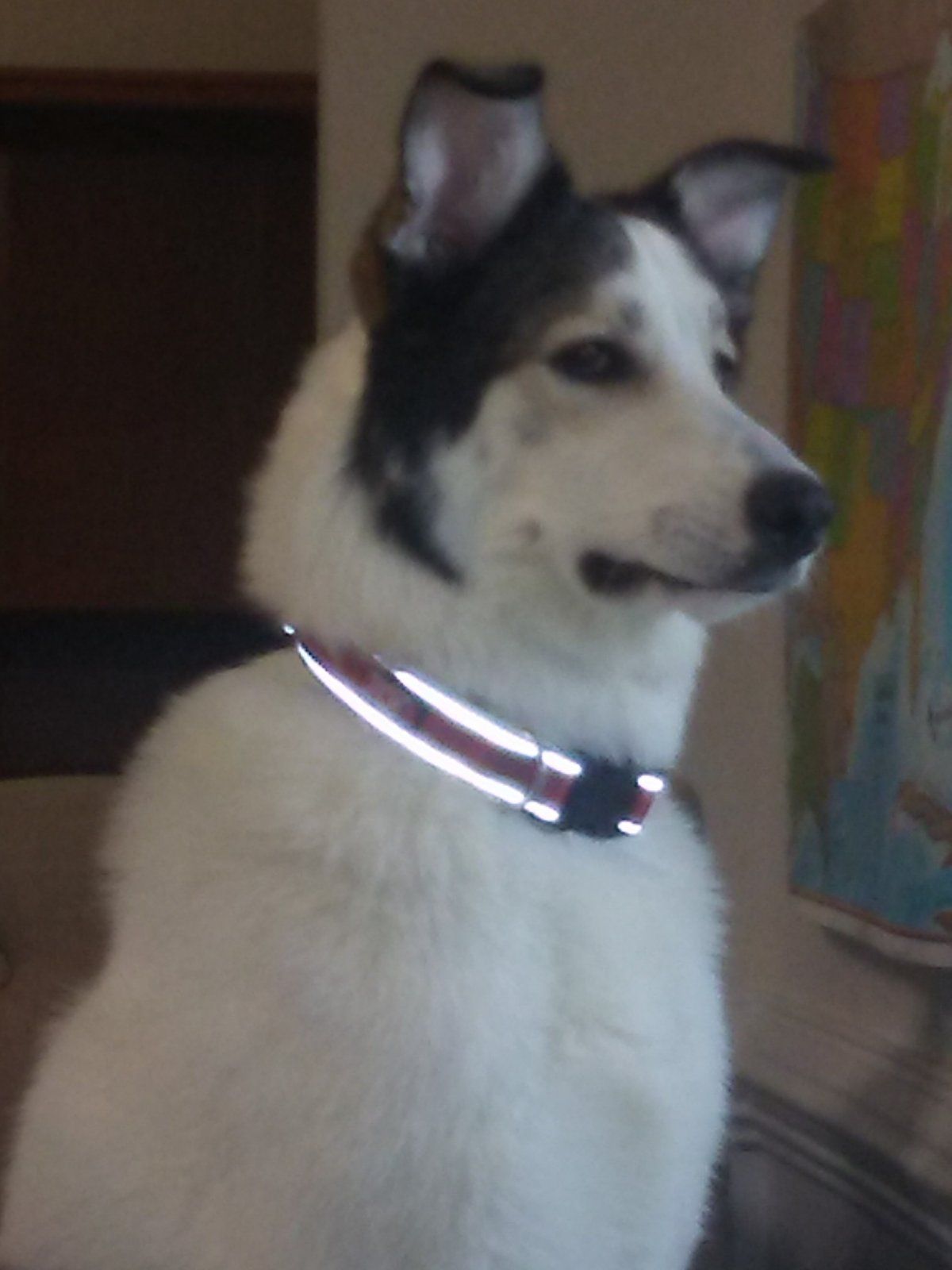 This is our family dog, Luna. She is a year and a half and is part husky (I think she also has Australian shepherd in her). She also has 2 different colored eyes, one fully brown and the other eye looks like an eclipse, being half brown and the diagnle bottom blue. We feed her IAMS, we fed that to our 2 previous dogs and they lived to be 17 and 18! Luna doesnt like the tennis balls much but she loves her tug of war rope and soccer ball (it used to be mine

). When its a movie night, she likes to cuddle up next to us and will sometimes roll over for attention lol. She also loves to dig in a giant hole she's made in the back yard that we allow her to dig in so she doesnt do it anywhere else...

(Also sorry for the bottom photo, I was trying to keep her still, and I realized that I shouldve done the sign with a marker lol)
Last edited by a moderator: Sunday at 8:39 PM

This is Chip! He’s a melanistic axolotl and he is doing something weird with his foot. Lol! He eats black and blood worms. I’ve had him for about a month and got him from my LFS. 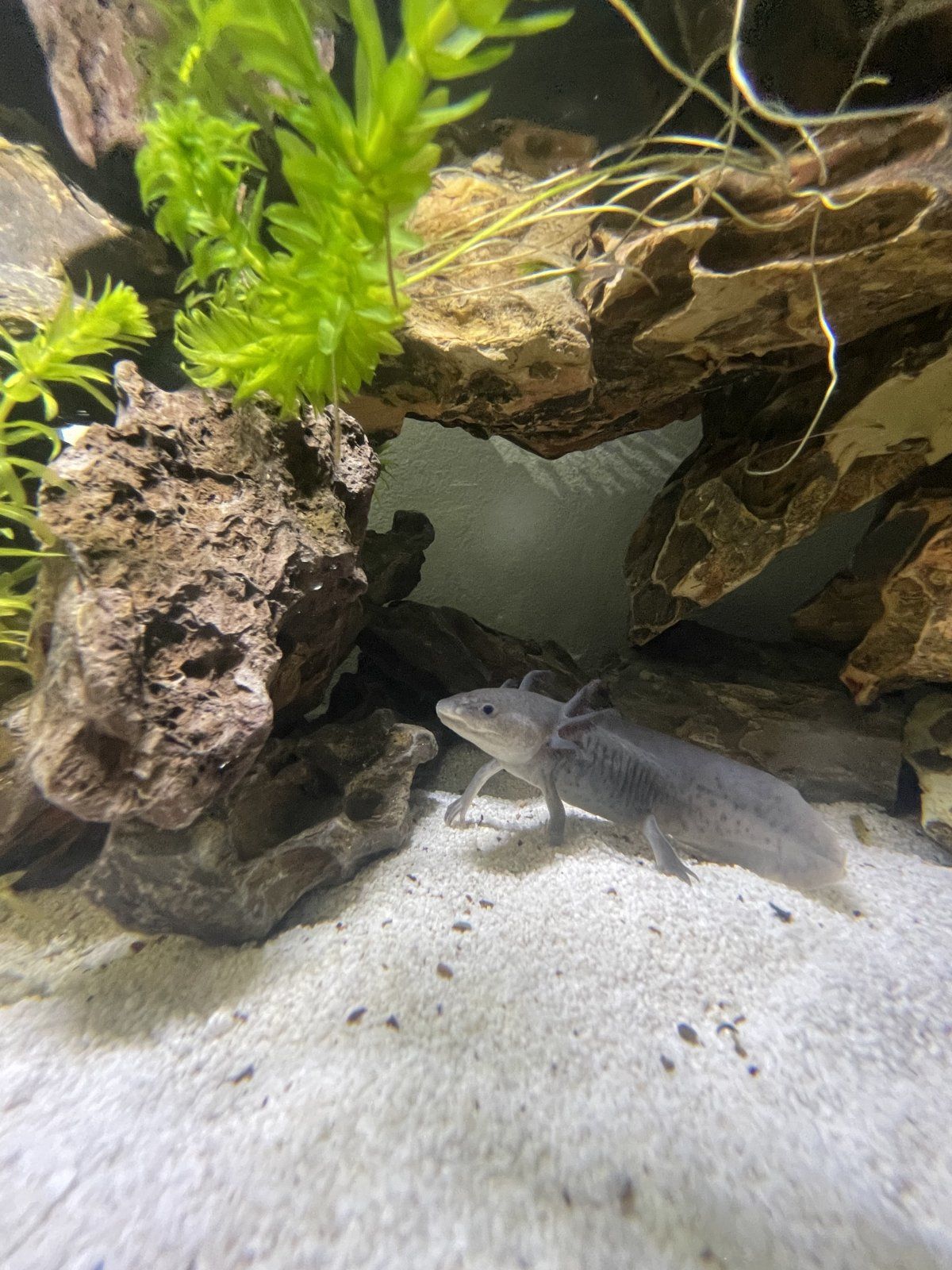 Last edited by a moderator: Sunday at 8:39 PM 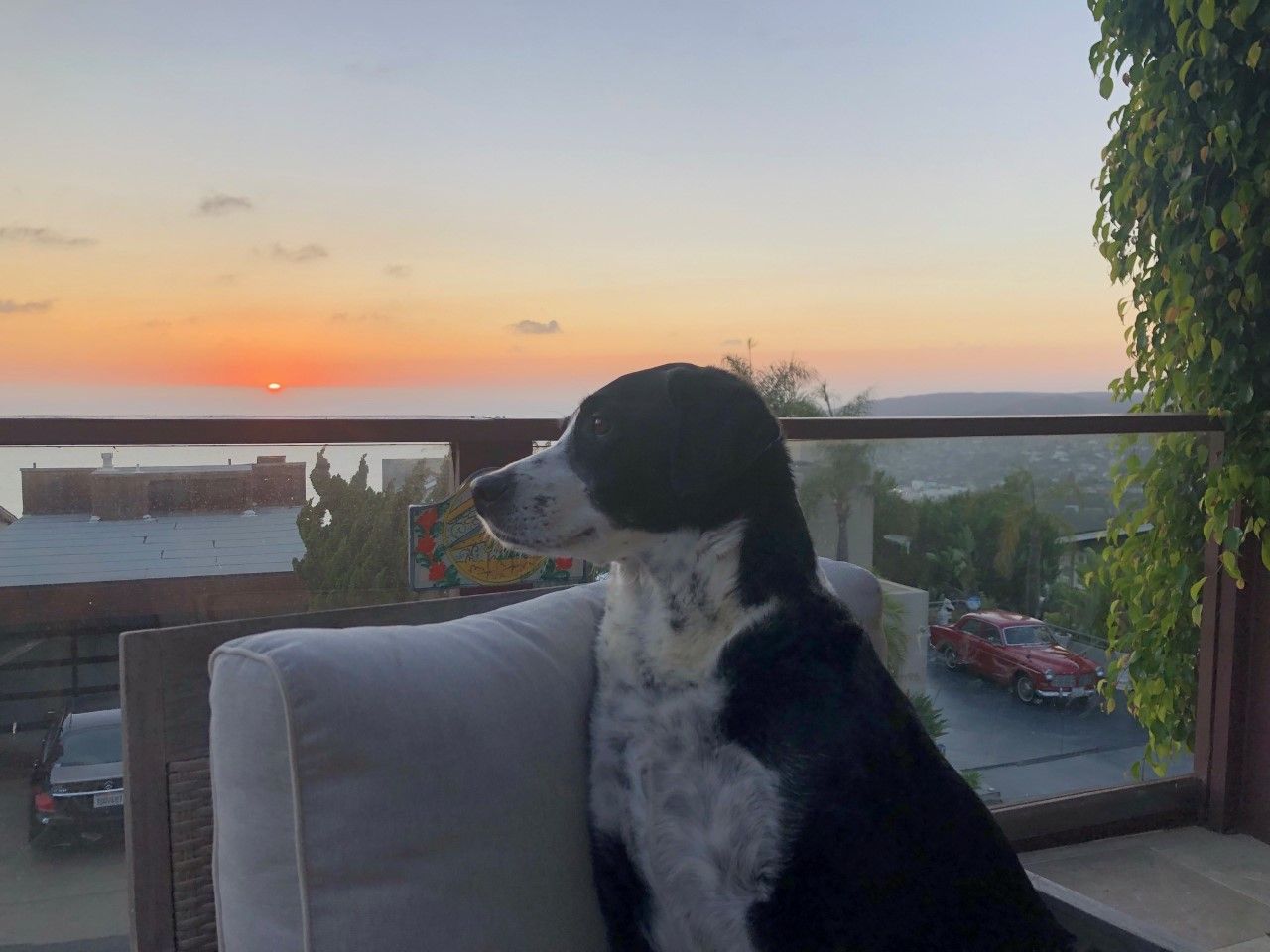 This is Casey Jane. She is a 9 year old collie/lab mix that we rescued from the Navajo Nation, also known as a Rez Dog. Every evening she likes to post up on ''her throne'' and monitor the street below while the sun sets on the Pacific Ocean. She is an extremely intelligent and outgoing dog that loves people but isn't a fan of other dogs, aside from her best friend and ''brother'' Henry, who is also a Rez Dog and was rescued at the same time.
Last edited by a moderator: Sunday at 8:40 PM

My photo is gravely impacted by The story behind it. 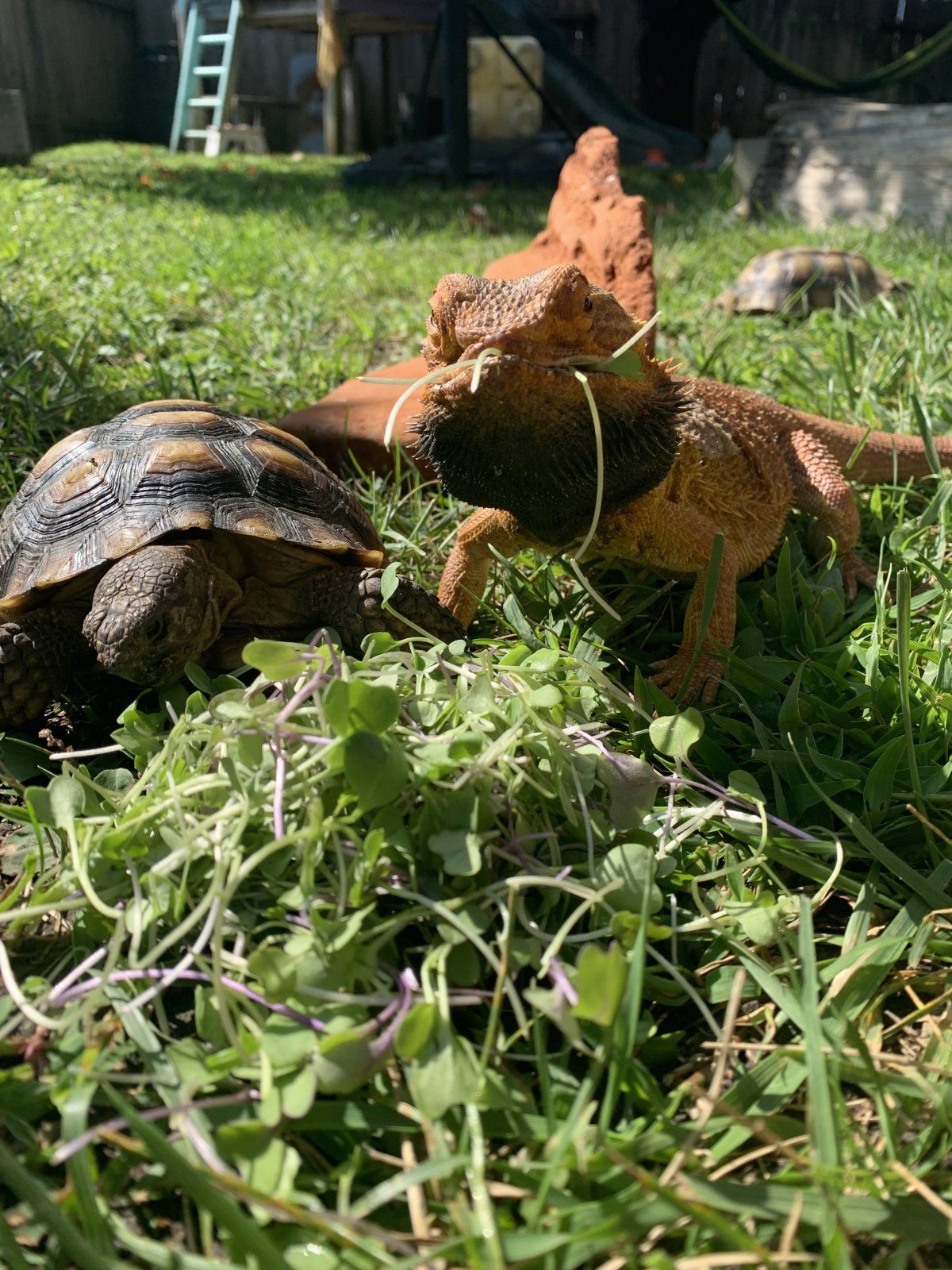 So, about a month ago, My bearded Dragon Sunny was assessed by a local exotic animal vet. We noticed he had a mass on his lip. He was diagnosed with Advanced Pariondontal Disease. This stemmed from the pet store he was kept at. He wasn’t kept at the right humidity, and it resulted in fungus around his mouth and periodontal disease. So, we took him to a separate animal vet that I used for my tortoises before. He specializes in Desert Reptiles. Without putting him under sedation, he noticed something terrible. His jaw bone was protruding from his gums. In other words, his bone was fractured. After further investigation, he noticed he had very advanced bone infection. The bone infection attacks Bone marrow, and spreads all over around the body, overall killing his bone marrow, thus killing him. They are very aggressive, and can only be taken out surgically. Unfortunatly, this surgery is very expensive, and costs 3k. I don’t know about you, but i don’t have 3k lying around. He is in pain, and at the end, I decided to euthanize him. I’ve had him for 6 years. He is the best lizard ever. He chases vacuums, eats Dubia Roaches with a passion, loves sweet potato, and absolutely adores the sun. The euthanasia is happening sometime in the next week. I’m absolutely heartbroken

. He is eating, and loving his last few days, he sits next to 2 of my Desert Tortoises, not having enough energy to chase them away from his micro green Pile. I was going to put in a different picture, but I feel I need to commemorate this guy and post a picture of his last few days. Everyone hates to lose pets. Thanks for reading

Last edited by a moderator: Saturday at 7:44 PM
OP

End of Entries:
Please slowly scroll up as you review the 9 awesome entries and then select your choice and click the cast button in the poll at the top of the forum. Thanks for participating in our Pet of the Month contest.

We will be accepting entries for our October Tank of the Month contest at the end of this monthi. For October, we will feature tanks sized at 17 to 30 gallons. If you have a tank of that size, we hope you enter it in the TOTM contest.
OP

WOW....20 members have already cast their vote in just one day. 9 days left for voting. If you haven't yet voted, do your part and cast your vote for POTM. Let's break the record for most votes cast in a TFF contest.
You must log in or register to reply here.