We have 5 worthy entrants for Fishforums' December Tank of the Month Contest. View all the tanks and descriptions below and then go to top of page and click on your choice for TOTM

Tapatalk users can only vote if they switch to the direct website. It’s best to view these awesome tanks on a computer screen or a tablet instead of a small phone screen.

Winner will get a neat "Tank of the Month Winner" banner in his profile area and will be featured in a "TOTM Winner" thread for all to see and to comment on. 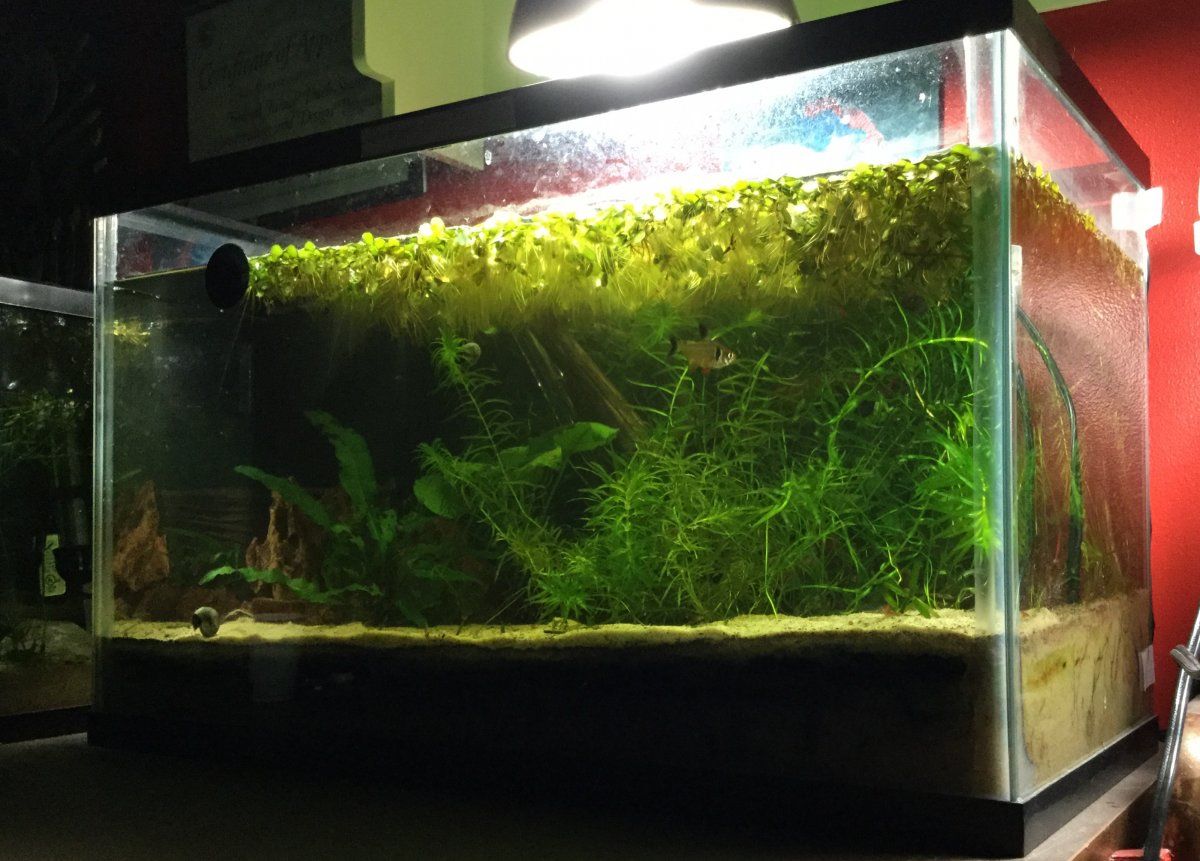 Once very day for all fish. I feed the Pleco 1 algae wafer a day, along with the snails/shrimp.

I have had this tank for over 1 year now, and it has grown a lot. (Literally). I have also had Blaze for a year as well. I leave the lights on for 14 hours a day, and the plants grow very very well.

Thank you for viewing, and I hope you vote for Underwater Garden! 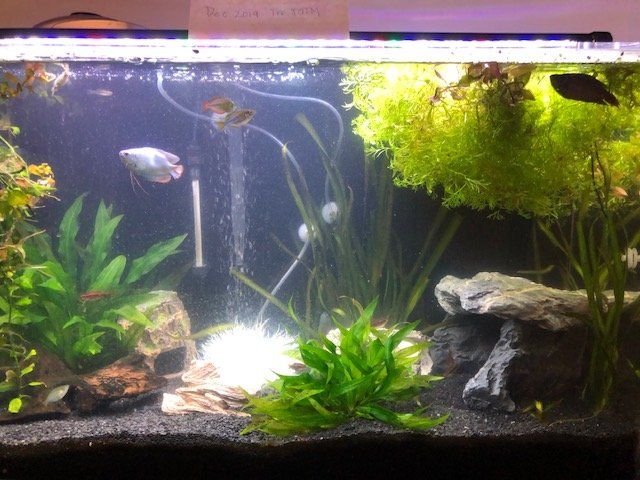 My goal with this tank was to provide for the needs of the fish, while hopefully still allowing viewers to see them. So I have a very large cave built out of slate, used mostly by the Pleco's and surprisingly the Cherry Barbs, the cave is slightly turned so you can sort of see who is inside. A number of hiding logs and driftwood, one soft plastic flower good for small fish to hide in and a ton of different plants all mixed together that provide them with a lot of cover.

Details: I started this tank in April of this year, it was my first real fish tank so I read a lot of books, checked out this forum before beginning my design. The design changes a little with every weekly water change to some extent but I like to keep the features important to the fish (like the cave) in about the same location. I've been a vocal newbie with a lot of long posts and already a lot of strong opinions My dreadful water parameters are a big improvement over the 8 ppm Ammonia readings I was getting. I had a perfectly non-fish cycled tank that took about 6 weeks to get perfect. It stayed that way until - in order to save money on shipping - I made a large order to an online retailer and fully stocked this tank and another tank that had just finished cycling. By adding too many fish at once I destroyed my Nitrogen cycle. I purchased another test kit and discovered that by using Prime daily my high ammonia numbers were actually referring to Ammonium (non-toxic) rather than Ammonia - which would have killed all my fish. The API test kit measures total ammonia so you will always see ammonium even though it is harmless. I tried Seachem Stability, and a number of other different chemicals with no luck. In addition I discovered our tap water was adding 1.5ppm with every water change and contacted our City's water department to confirm that. So it's been a long battle to get the ammonia down to reasonable levels. By adding Tetra's Safe Start Plus after every weekly water change I have brought the ammonia readings down significantly. Some days I even get zero readings. Another challenge has been our City's PH which is 9.4 - way too high for freshwater tropical fish so I've had to play around with PH+ and PH- in order to keep the PH between 6.8 and 7.4. I do this slowly and with careful thought knowing that the PH is going to continue to change after I add various solutions. I have been successful and have never killed a fish with a PH change. Of course I just get it perfect and it's time for another water change. But I have a pattern down to how I fix it so it's not so bad.

Live Contents:
Powder blue Gourami (1), actually 2 but one is in hospital with Swim Bladder Disorder
Dwarf neon blue Gourami (2)
Red White Blue Gourami (2) (both males, they off and on turn completely BLACK then their stripes return.)
Long finned zebra danio (1) - he systematically killed all his schoolmates as well as ate the fins off a Gourami so I know he should be in a group but he is not safe.
Cherry Barb (5)
Peppered Cory Cat (3)
Licorice Gourami (2 - when you can locate them, very tiny)
Bristlenose Lemon Pleco (2) - best algae eaters ever
Blue Phantom Pleco (1 -only about 2" long so far)
Thomasi L188a Pleco (1)- rarely seen, comes out only at night
Algae Eating Bluefin Killifish (4 - when you can find them, very small)
Gardneri Panchax Killifish (2)
Praecox - Rainbow (2)
LOTS of different plants - frogbit, sprite, arubia, spears and a couple I'm not sure about. I use Seachem Flourish about once per month.
Last edited by a moderator: Dec 6, 2019 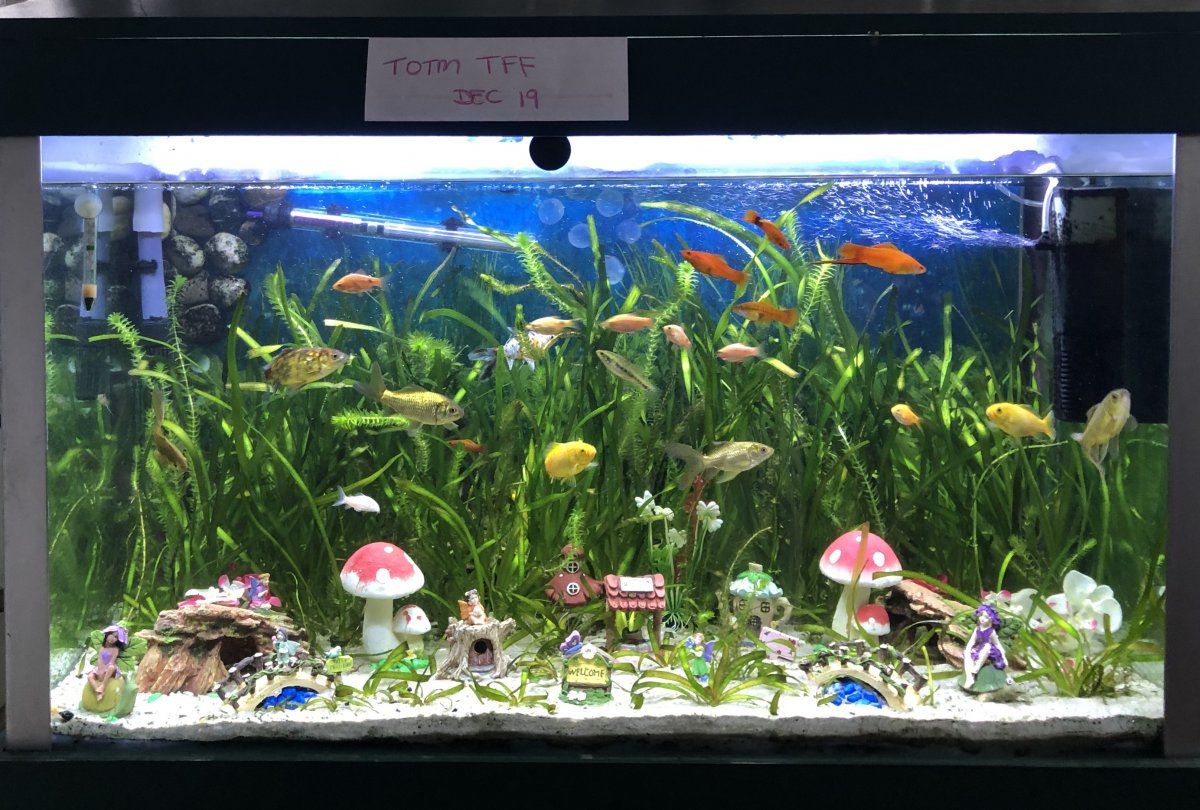 Filters are AquaOne Nautilus 2700UVC & an AquaOne Maxi 102F internal filter that runs the air filter. The lighting includes a 10.0 UVB fluorescent light and a PetWorx 36W blue/clear LED light. Heater is a 200W AquaOne that sits around 24 - 26 degrees.


They eat a range of everything. Pisces tropical flakes, Tetra freezer dried bloodworms, sinking algae waffles and frozen bloodworms. I also add a variety of fruits and veggies 2 times a week eg. Rockmelon, cucumber and zucchini.The goldfish and the algae eaters go crazy for it.


There is a range of Val, Elodea, ambulia (sticks now) & Hornwort (also sticks from the goldfish eating the leaves) that bed in a flooring of Riversand. Ihave Calgrit mixed in the riversand to help with the PH level and also calcium. No fertiliser is used.


I do a water change every 1-2 weeks and condition with Seachem prime every water change or when needed. Cleaning is done every few days via net and a non scratch sponge. I also run my fingers through the substrate to help filter the debris. I also test the water with an API test kit.
L 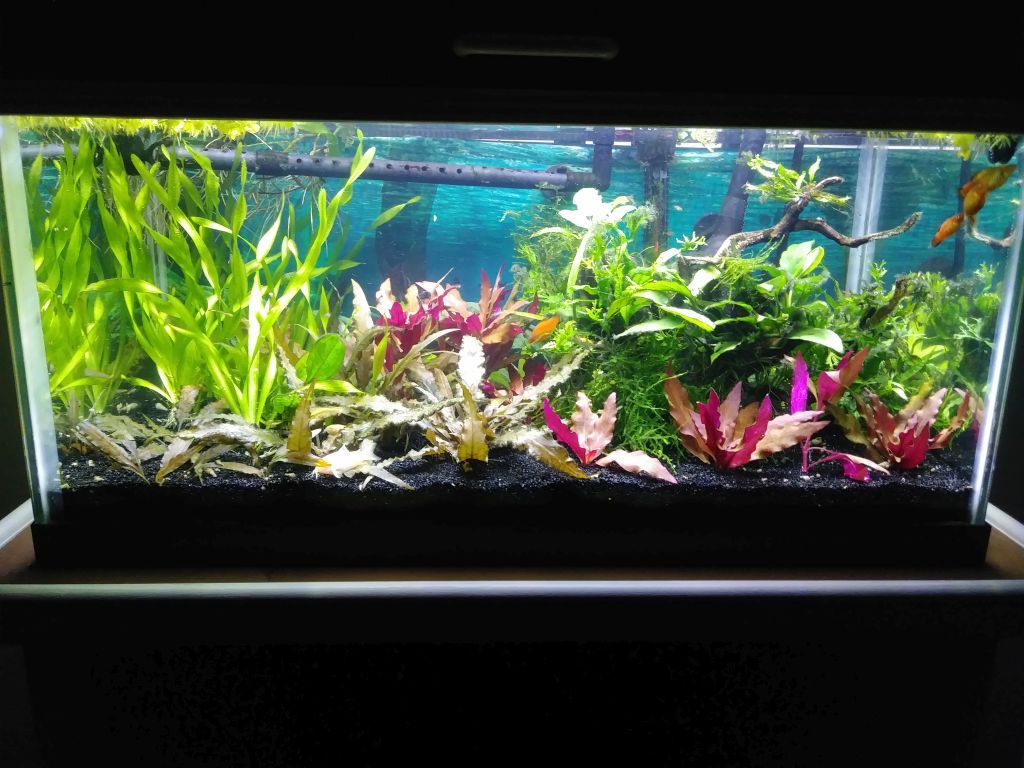 This is my 15 gal long glass tank . It has been running for over a year .
It houses:
10-15 Platys , adults and fry
3 Albino Corys
6 Ottos
Ghost shrimp and a herd of Malaysian Trumpet snails .
My water is soft so I run crushed coral in my filter that keeps the pH at 7.4 and the kh at 2 and the gh at 3 .
My Nitrates run about 15-20 and I dose Easy Green weekly at water changes and use Flourish root tabs occasionally .
I change ~50% of the water weekly treated with Prime , but I don't have chlorine in my water as it is filtered out . I just use the Prime "in case " .
I don't use CO2 , but I do dose Excel(Glut) daily .
It is planted with :
Vals , Bronze Crypts , Alternanthera Reineckii , Anubias , Lutia , Java Fern , Java Moss , Melon Sword , and Salvinia floating .
I use a Beamswork LED light set at about 80% intensity for 8 hours a day .
I don't use an air stone . My spraybar ripples the surface enough .
The substrate is Black Diamond Blasting Sand . I use a Sun Sun 302 canister filter and it does an excellent job . I use a Tetra heater on a DIY Inkbird controller . Keeps the tank at 77 degrees F .
I feed once a day and twice daily a few days a week . I don't do anything special for the fry I get . I just let nature take it's course . I figure only the smartest , strongest will survive . There are lots of hiding places so I get 10-12 fry to adulthood most batches . I have a 30 long I put the adults in as they come of age....lol
Well I guess that's it ,
Thanks for looking . 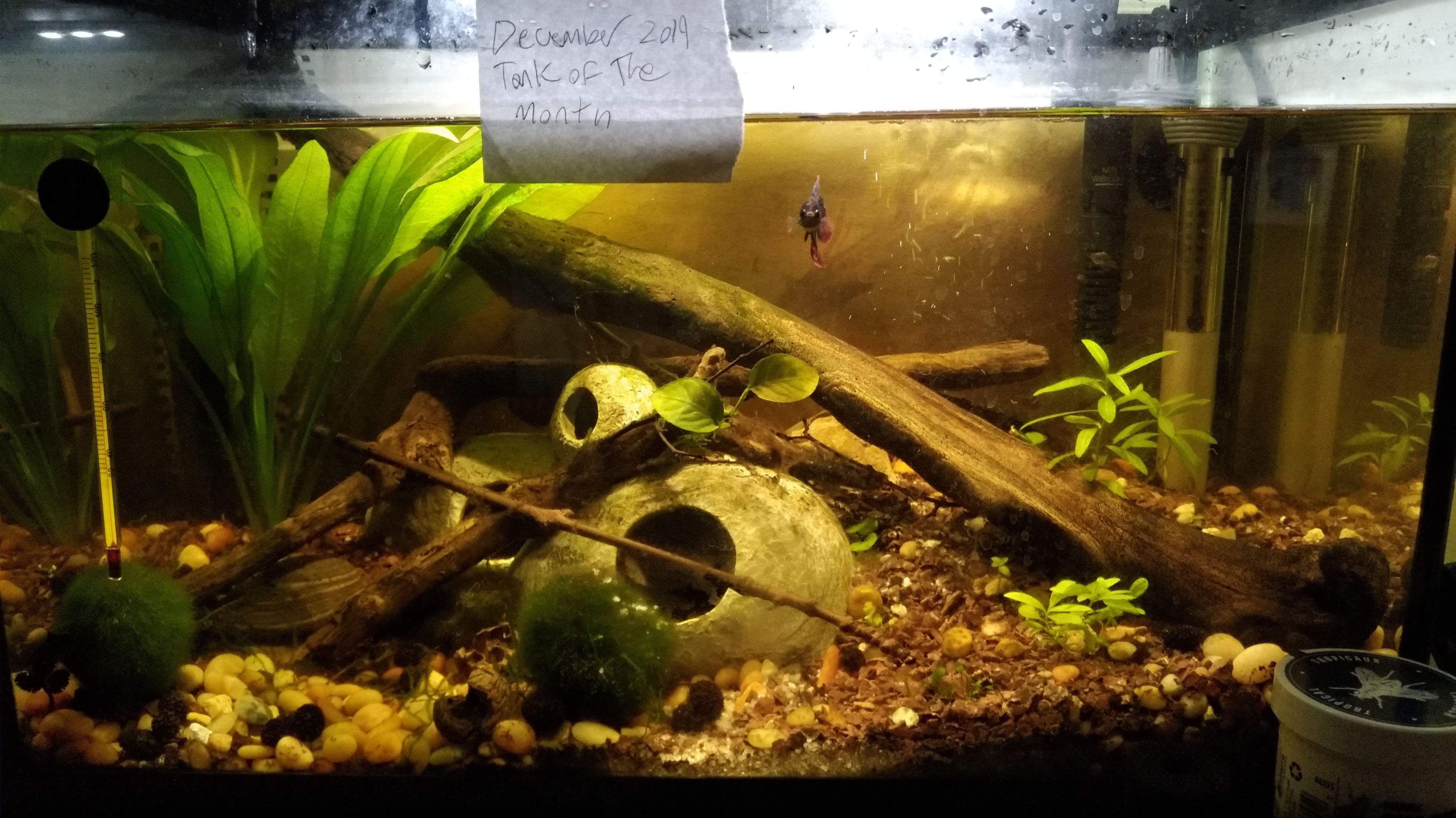 This is my betta tank!

This is a 10 gallon tank that houses a single female Betta and several Sunkist Cherry Shrimp. (They're probably hiding for this photo)

This tank is supposed to be a blackwater aquarium, but I can't manage to get the pH to budge. Right now it's 7.6, even with driftwood, alder cones and leaves.

By the end of this month, the tank will be one year old! The plants in here are:
-Amazon sword
-Marimo moss
-Hygrophila polysperma
-Hygrophila siamensis 53b
-Nymphoides "Taiwan"
-Hydrocotyle "Japan"
-Anubias Nana
-Glossostigma elatinoides (It's very tiny right now)

I dose API Leaf zone and a tiny amount of Flourish Excel when I can remember, there's root tabs in the substrate as well. I change out about 10% of the water weekly and top up water when I can.

The filter is a Topfin Silenstream 10 power filter, the LEDs and heater came with the starter kit I bought the tank with. I don't use the heater though, it makes the tank too hot. (Seriously though, the tank was 90 degrees in there!)

That's about it, thanks for looking!
OP

END OF ENTRIES
Slowly scroll up as you review the 5 entries and then cast your vote for TOTM. Thanks for participating in Fishforums' Tank of the Month Contest.

Our Fish of the Month contest resumes on December 12th. This month will feature Angelfish only. If you have an Angelfish, I hope you will enter the FOTM contest.
Last edited: Dec 6, 2019
OP

Note to our members who use Tapatalk. The app won't allow you to vote. You need to sign on via our direct website to view the poll and cast your vote.
OP

POLL has closed. We have a winner. Aussie_Bristle has won Tank of the Month for December. If you'd like to congratulate Ange on winning TOTM, go to this thread: https://www.fishforums.net/threads/winner-fishforums-december-2019-tank-of-the-month.455416/

What is this on the chicken breast?

The best filter for pleco tank

One of my mysteries VERY cracked shell...