We have 5 entries for Fishforums' April 2020 Tank of the Month contest featuring tanks sized at 17 US gallons up to 29 US gallons. View all the tanks and descriptions below and then go to top of page and click on your choice for TOTM

Winner will be awarded a neat "Tank of the Month Winner" banner in his profile area and will be featured in a "TOTM Winner" thread for all to see and to comment on. 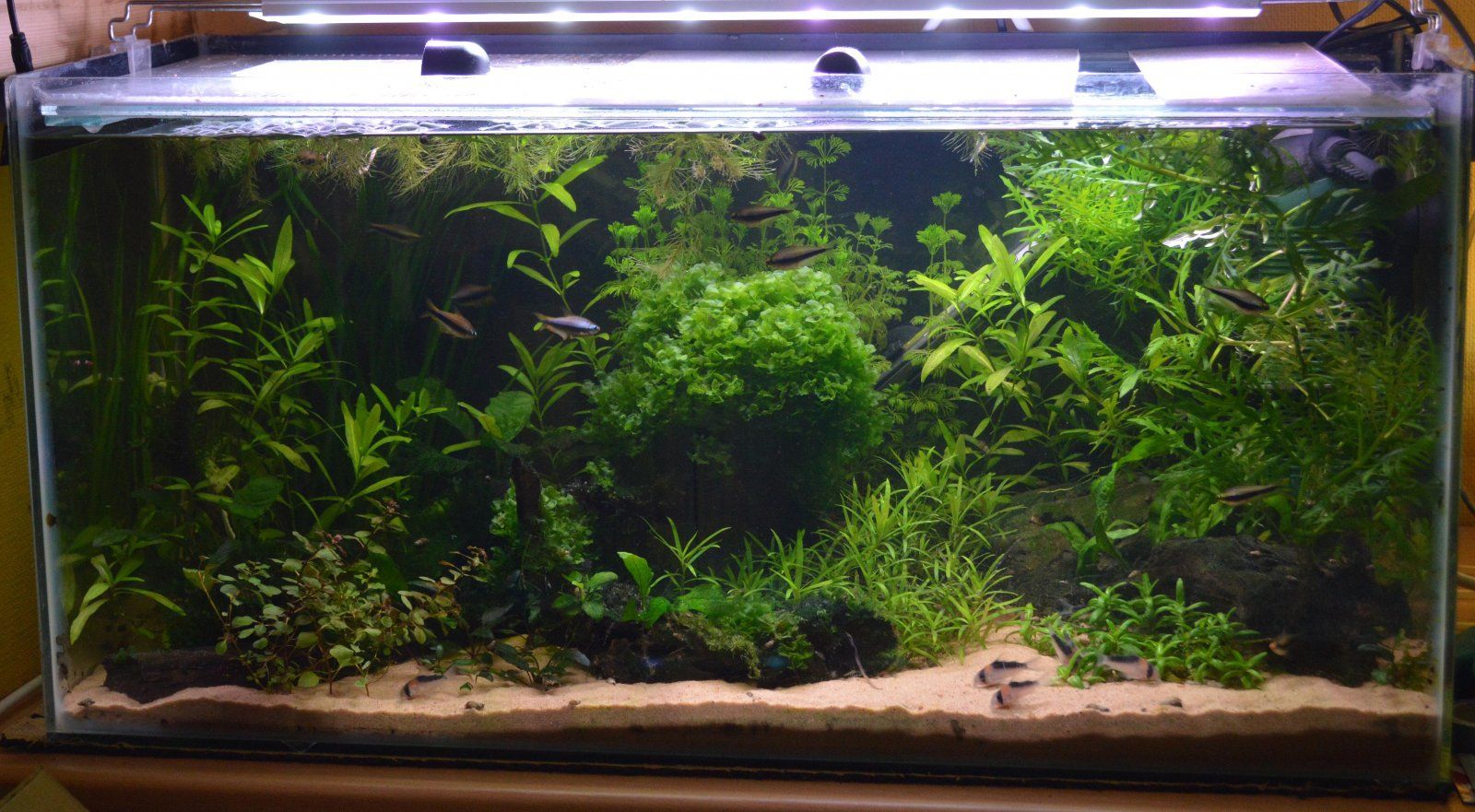 This is a 30*12*15 tank (Just under 20 gals UK) containing 12 Nematobrycon Palmeri (Emperor tetras) and 11 Corydora Duplicareus. Planted with a variety of low light requirement plants. This tank is about 6" off the floor of my fishroom (Large cupboard) so it's hard to get good pictures. Lighting is An Arcadia Classic Stretch LED. PH is around 7. The tank in it's current state has been going for about 4 months. Fish are fed twice a day, occasionally more often, on a variety of dried and freeze dried foods. Come summer I feed live food occasionally. 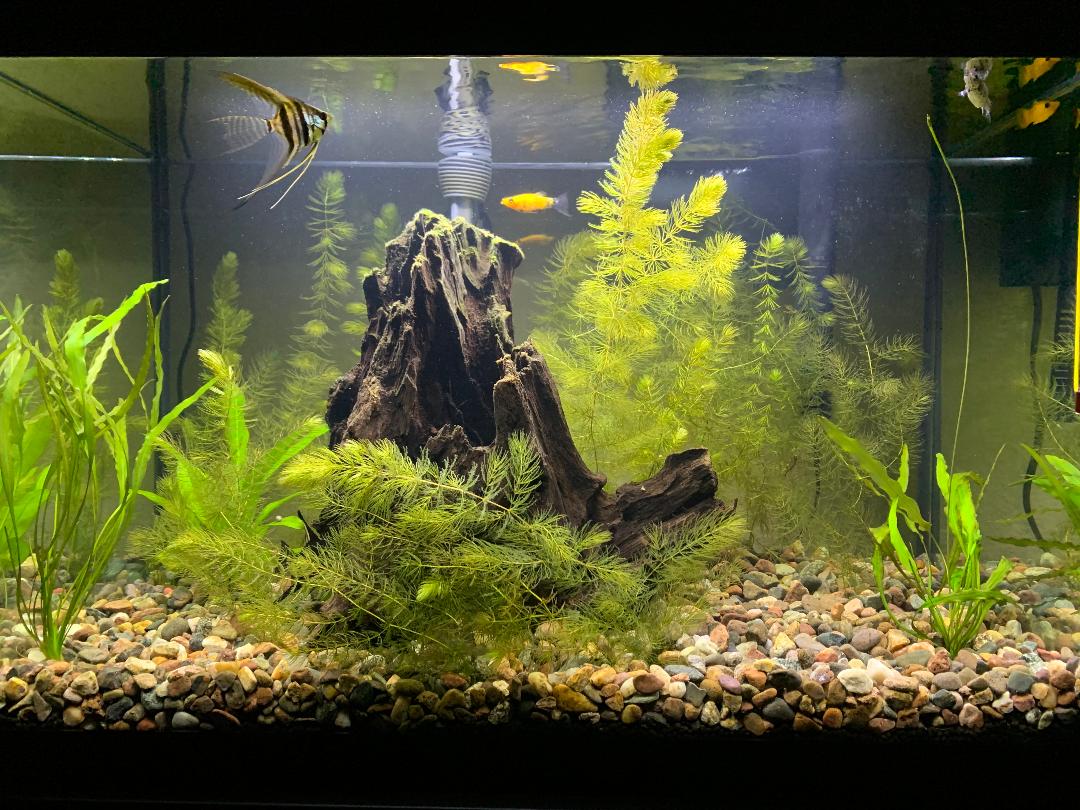 Our tank is 20 gallons. Has been running for a little more than a month. Currently, we have 2 Angelfish, 3 Mollies, and 1 rainbow pleco. Our water parameters as of today are the following: PH-7.0 Ammonia-0.25 PPM Nitrite-0PPM Nitrate-5PPM. The tank is planted with only live plants. The plants are Hornwort, Anubias, and Aponogeton. Lighting used on this tank is LED lighting. The filtration is a HOB setup. We do weekly water changes of 35%. Fish are fed every other day. Hope you all enjoy the tank!
Last edited by a moderator: Apr 1, 2020 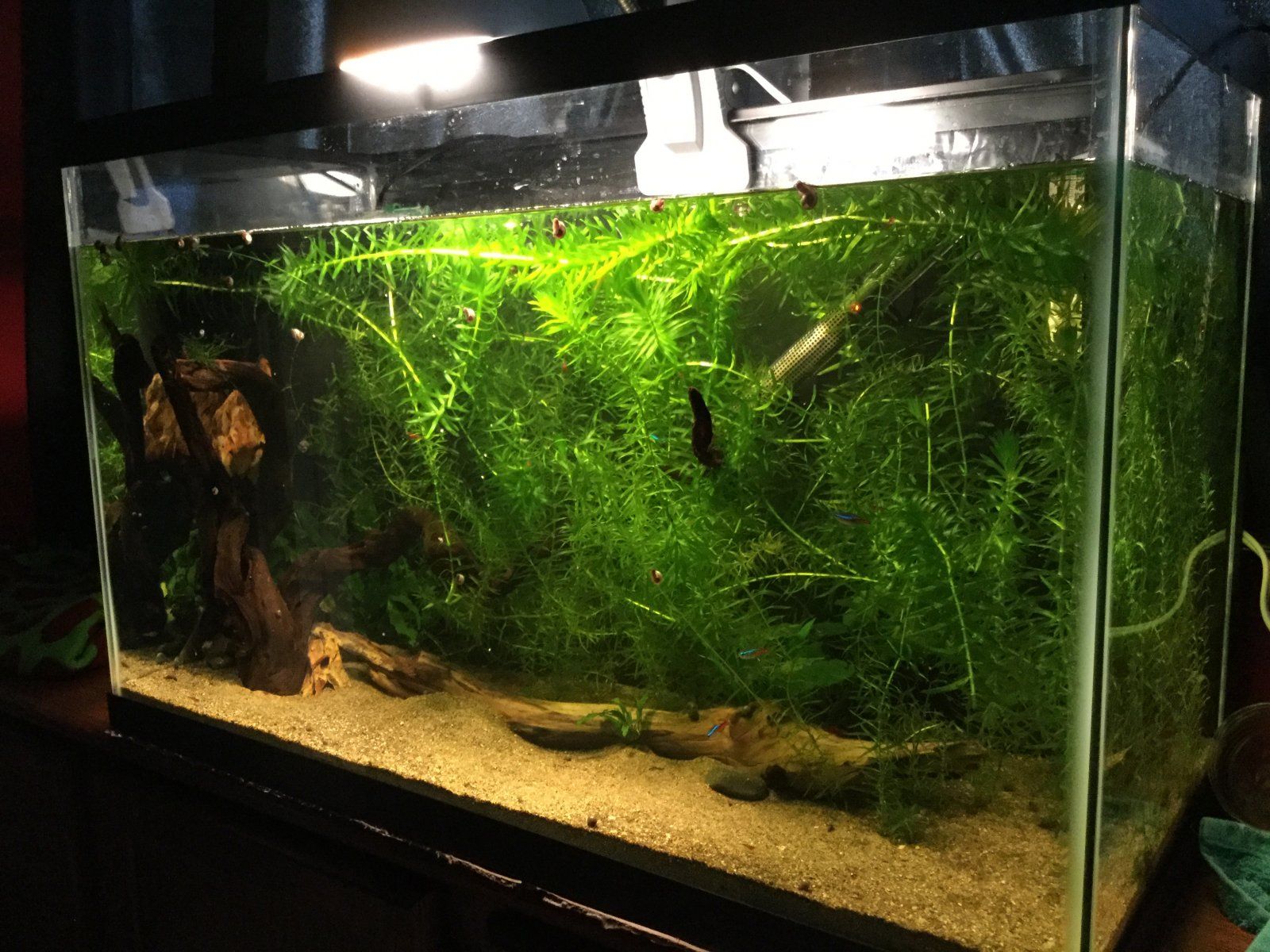 This is my 29g tank named “Fish Paradise”.

-Lava Stone (Used to anchor the Anubias and Java fern)

Background: Black compactor bag tapped to the back

Pleco/Snails/Shrimp: 1 Blanched cucumber or 1 algae wafer every other day

I do a 25%-40% water change very week. I clean the filter biweekly and I scrub the glass with a sponge every 3 days. I clean the sand once a week.

Information about my tank:

I have had this tank up and running for a little over 5 months now. I got this tank during the PetSmart $ per gallon sale and I am loving it. The Plants are thriving with the 80 WATT LED light and looking very lush. The neon tetras were added about 3 weeks ago. I have had Alabaster for over 8 months now. I use no fertilizers in this tank. I keep the lights on for 14 hours a day, that is how I achieve such good plant growth.

Thanks for viewing “Fish Paradise” and I hope you enjoyed it! 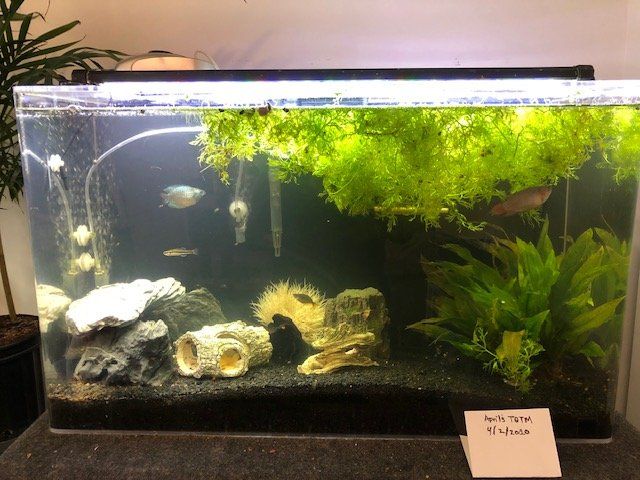 This is my first fish tank since I was about age 4 and had a disaster with a guppy family, therefore it is cleverly named "Tank A". It is a 29 gallon acrylic which is impressively lighter and clearer but this once was constructed with a barrier down the middle which makes water changes and other maintenance rather difficult. Speaking of water changes, this picture is the one picture where I DIDN'T do a weekly water change of about 80%, because my back is "out" (I'm old). I basically removed most of the debris (as I'm doing nearly daily with all my tanks) and switched out about 8 gallons of water. A friend of mine assists me some weeks with the 4 tanks I have but we are each in quarantine right now - she's the muscle and probably the brains sometimes of this operation.

I believe a tank must first be functional then beautiful. In this case I've tried to design the tank around the type of fish I have in it. So you'll see I have foliage to hide in, I have nearly 50lb slate rock cave and a number of other hiding places as well as much open swimming space (most of my fish swim in the middle and bottom levels of the tank) as possible. Other than not doing a great job of covering up the cords (I have two air bubblers in there) I'm pleased with the way it looks. I have an Aquaclear filter which gets cleaned weekly, and due to the EVIL FROGBIT PLANT my filter tube is constantly clogging so that's a near daily cleaning event. I have no need for fertilizer for the plants - I have a super-duper LED full- spectrum light clipped on top of the tank. The plants grown here supply the plants in my other tanks. Besides the Frogbit I have Wisteria, Swords, and Anubas.

Here are my current fish - I had a roundworm incident ( which didn't hurt the fish but I want to make sure they don't come back before getting a few more fish)
Neon Blue Dwarf Gourami (2) - middle of the tank swimmer
Red/Blue Dwarf Gourami (1) - he sometimes turns all black then back to Red and Blue - middle of the tank swimmer, since his buddy passed away he is harrassing the other fish - not NICE to watch. Hides in foliage most of the time.
Long Finned Zebra Danio (1) - he's a serial killer and killed all his school mates so no more Danios with him in the tank
Peppered Corycat (1) - I never know if he's alive he hides so well - then out he pops - have to wait for a water change to get a decent look at him. Used to have 3 of these and they would sleep one on top of the other - it was hysterical to see.
Licorice Gourami (2) - tiny little things but very pretty
Lemon Bristlenose Pleco (2) - one male, one female with zero interest in each other. Cave dwellers, the male is terrified of people the female is friendly and always has a smile on her face. The male is nearing 4-5" long and tries to squeeze himself in some of the smaller hiding places.
Thomasi L188a -(2) more cave dwellers - a male and female (when stuck to the glass you can clearly see their private parts. No interest in each other. Very difficult to locate since the match the substrate and backdrop. I never know for sure if both are alive, but I verified this.
Blue Phantom (1) - my one big splurge purchase - cost over $100 Blue with white polkadots. Unfortunately, another cave dweller that you will rarely see out and about. Amazing to look at but all in all - a boring fish.
Gardneri Panchax Killifish (2) very tiny but cute
Rainbow Praecox (1) - small fish that swims in the middle. Needs a new friend, his buddy passed away.
Snails, snails and more snails - removed by the hundreds. I try to keep the pretty red ones but they are far and few between

So this tank is my pride and joy. but is probably the most difficult to maintain give the structure - and placement of LED lights and air pump, but it's all worth it.

Good luck everybody!
Last edited by a moderator: Apr 6, 2020 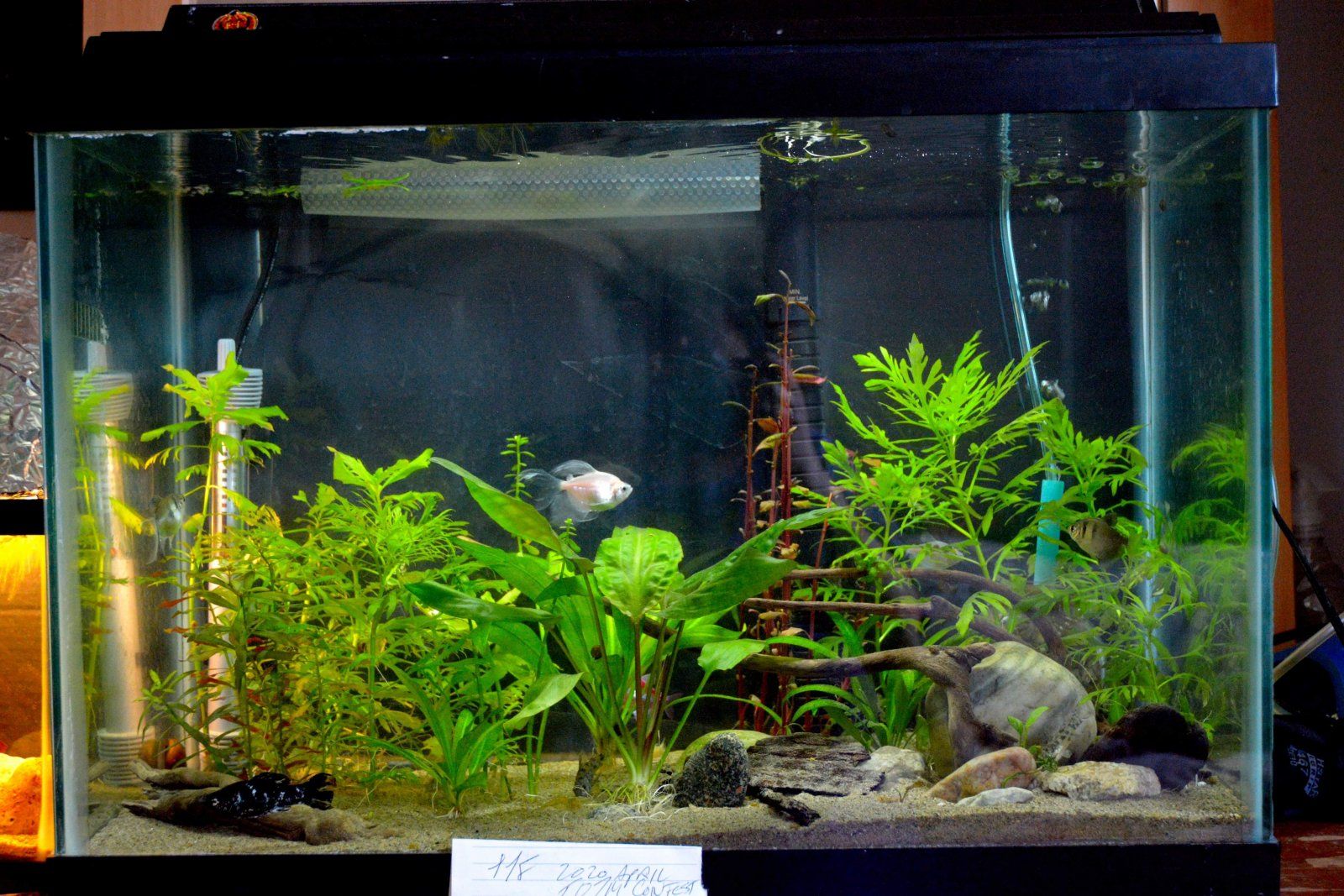 END OF ENTRIES
Please slowly scroll up as you review the entries and then cast your vote for April Tank of the Month at the top of the thread.

Thanks for participating in our TOTM contest.

After a TOTM winner is announced, we will start our Fish of the Month contest around mid April. This month we will feature livebearers only..such as Platies, Swordtails, Guppies, Endlers, and Mollies. So if you have livebearers in your tanks, take a pic of one of them and be ready to enter our FOTM contest in mid April.
Last edited: Apr 6, 2020
OP

24 members have voted so far. If you haven't yet voted, please review the entries and vote now. Thanks for your participation in April's TOTM contest
Last edited: Apr 11, 2020
OP

Just 3 days left to vote. Let's push this vote count past 50. If you haven't yet voted, please vote now!
OP

Just one day left for voting. Please support our contests by voting now if you have not yet voted.

A moment ago
TCJeeper
T

A moment ago
magical trevor

A
What worms are these?