Update on the Otos

For those that missed it I treated myself to 20 otos yesterday. I have wanted to keep these for some time and now have some in each of my 3 tanks. I wanted them for their own sake rather than their cleaning ability . The other 2 tanks have very little visible algae but are both mature tanks. This tank is my newest and I did have an algae problem until a few weeks ago. Once I resolved the cause I was pretty half hearted about cleaning it because
The group I found looked healthy, if a little skinny. I saw them actively feeding in the store and the manager (who I know) told me they had been taking algae wafers and had been de-wormed when they came in. So I took a chance and put them straight in (no I don't recommend this ). This particlar tank got allocated 6 of them.

Fast forward 36 hours and I swear they are noticeably plumper. I can't believe how much they have got through. The driftwood in the photo was uniformly green yesterday morning and the anubias leaves had a lot of algae on them. I wish I had taken a "before" pic. The crypts and sword on the left had no algae, which is how I know that I no longer have an algae problem. Of course more input means more output but that's a small price to pay.

No casualties so far and the sids seem to be ignoring them. I understand that they are high risk in the first month as they need to feed constantly and are starved prior to and during shipping. My standard approach to setting light duration is to keep increasing it till I see visible algae within a couple of days and then dialling it back by an hour. I have already put the hour back in the other 2 tanks, I reckon this one can wait a couple of days more before I increase the time.

They are indeed fascinating to watch and constantly busy. If you do decide to get some please do heed the advice that they need to be in a mature tank. Its not just about water quality. They really are enthusiatic feeders. Personally I would not use them as a substitute for fixing algae problems. I did a deal with myself that I would not get them until my algae was under control. But I have saved myself the trouble of cleaning it up

Enjoy your otos, if you hear a loud burp you know their full.

How big can it gets?

They look fun to watch! Congratulations on your new fish babies!

looks like they have settled in nicely, great additions

looks like they have settled in nicely, great additions

Interesting to watch and just looking at yours i can see little subtle difference between mine
Click to expand...

Agreed. Must say after your account I was a little surprised to see them all out and about right from the beginning. I have done several head counts and usually track them all down within a couple of minutes. Not always so easy in the community jungle. Even the bristlenose manages to go missing in there
U

In my other tank I have been considering chucking out the vals now that the hygrophila has established. This tank has a KH and GH of 0 and vals "need" hard water. They do grow (slowly) but as the blades get longer they become more and more covered with algae and are quite unsightly up close. Well they are a big hit with the otos and are now spotless. So for the time being they stay

In my other tank I have been considering chucking out the vals now that the hygrophila has established. This tank has a KH and GH of 0 and vals "need" hard water. They do grow (slowly) but as the blades get longer they become more and more covered with algae and are quite unsightly up close. Well they are a big hit with the otos and are now spotless. So for the time being they stay

Wow they cleaned that fast, I could use them to clean my castle, the nerite snails have been at it but there is still plenty to be eaten and they are slow. I gave up on my vals between what the mystery snails did to them and the melt I have 2 plants with very little left.

Wow, they need some nutrislim or something, yeesh guys! xD 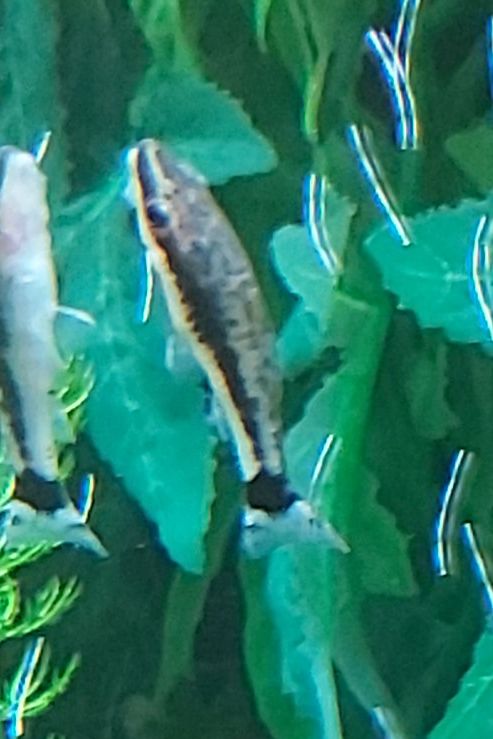 Two of mine are in full beast mode now. They must be finding the sweet spots in the tank. This is my second biggest of the 6. Just brushed past a pack of my male Rosy's like a Tiger shark

How's yours settling in? Can you see your face gleaming through the glass yet lol?

Barry Tetra said:
How big can it gets?
Click to expand...

Oto catfish get about 2 inches, maybe just over. Mine is a year old and hasn't gone past that.

I'm so excited about for you

! I have a 10 gallon, and not much algae, so I've only had one for the last year but I absolutely love my oto! My son just calls him Oto, s/he's a very resilient fish!

I say that because I got him with my first batch of Danios, in order to fish-in cycle my tank. I had never done a fish-in cycle, and I wanted to check it out. I will probably never do that again cuz I felt really bad about all the fish being in such harsh conditions (all 8 Danios lasted the 3 months until I returned them to the fish store), that this little guy is still rockin it! 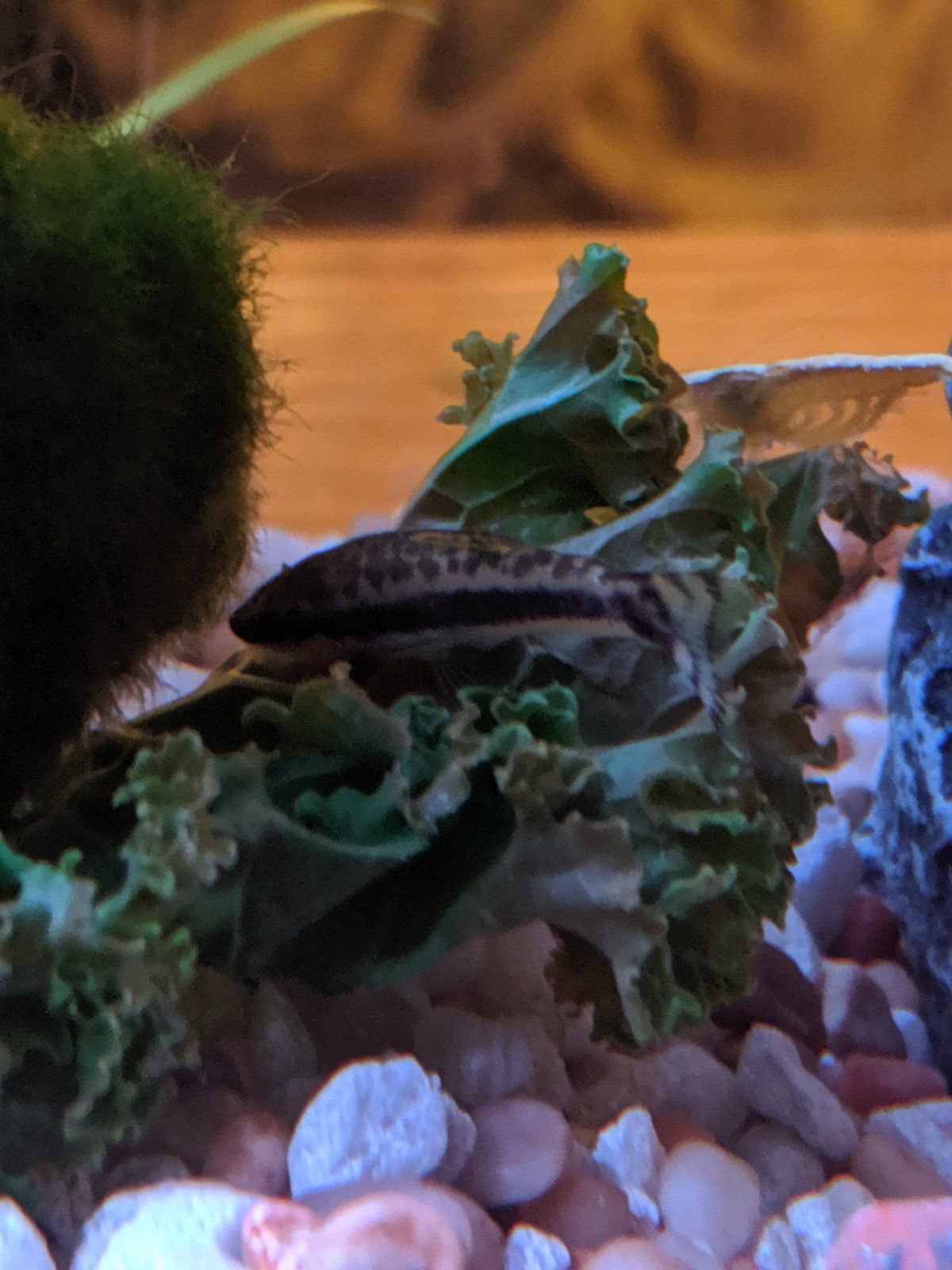 He loves kale & zucchini, if anybody's looking for something to feed their otos other than algae

Won't bore you with pictures of clean chunks of driftwood. They have been that way for 2 days now and the anubias are sparkling. They haven't started on the glass yet so I guess there is still plenty of food on the plants. I have extended the light by an hour in this tank and an additional hour in the other two. All present and correct. The 2 smaller tanks have just had their water change.

The other tanks are starting to show algae on the glass (and the otos have started eating it). I'm ok with this because I'm off on hols next week so have to make sure the tank can support them without any help from me.
OP

Day 3 of 2 hours extra light and I can't believe how much faster the plants are already growing. Just proves how delicate the balance of systems is. I have planted some new root tabs and upped the liquid fert to try to make sure the plants get enought nutrients. There is noticeable algae on the glass but I'm not cleaning it yet. I have had to clean the tank rims above the water line where the fish can't reach because that already has a lot of algae.
You must log in or register to reply here.
Share:
Facebook Reddit Pinterest Tumblr WhatsApp Email Link

Cross with a blue rilli

Today at 3:14 AM
Sampagne
S
A
Rummy nose aren’t well

K
Dropsy or Something Else