I have had this lovely sea urchin thrown into my care. I wasn't planning on having any for quite some time but alas I have one.

I know the set up, general care, salinity, all that good stuff for salt water inverts and tanks. But I was wondering if anyone knew what species/kind of sea urchin this is? And then what sorts of things that species would prefer to feed on.

I have several frozen foods from krill, brine shrimp, to blood worms. And then I also figured means that many sea urchins feed on algae I may try an algae wafer.

This is just the container it was held in until I put it in the regular tank. 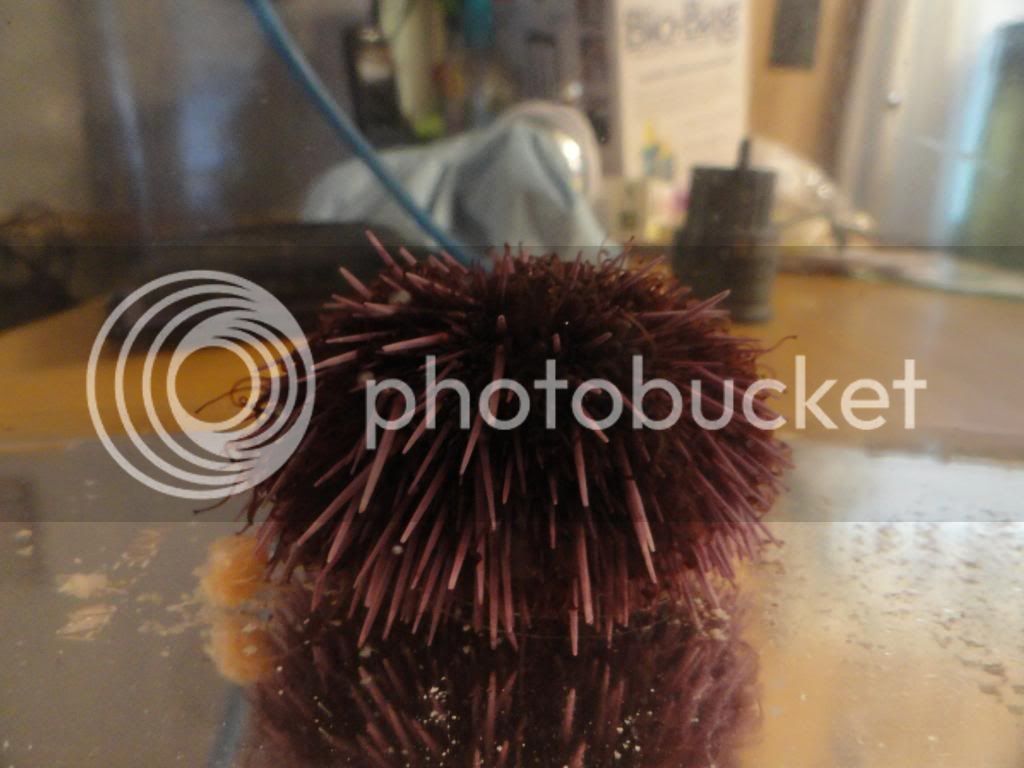 Two things come to mind: Strongylocentrotus purpuratus and a color morph of Lytechinus variegatus that looks very similar. The best distinguishing feature for L. variegatus is the presence of specialized tube feet that look like little round balls on short stalks close to the body, and they can be hard to capture clearly in pictures. I would hope that it's not S. purpuratus since that is a coldwater species that often doesn't fare well in tropical tanks despite its range extending into areas where the water can be warmer, but they do show up periodically in the trade. L. variegatus, on the other hand, is often collected from tropical zones and does quite well as long as the temperatures aren't excessively high (some run their reefs at a constant 84F, which can grow corals like crazy but is 4-6F too high as a year-round level for many commonly seen inverts).

I have never kept S. purpuratus, but I have kept many L. variegatus and several other species that are primarily grazers like those two. The main rule with grazing species is that if you don't have a tank loaded with algae that the urchin is clearly observed to be grazing on, or if that algae gets sparse, you'll need to supplement with dried seaweed frequently, possibly on a daily basis (L. variegatus eats a LOT and will starve if it can't snack on things throughout the day). Which types are preferred varies from one species to another although most urchins I've kept have shown preference for red seaweed species. It's best to keep a variety and offer a different one periodically. Some "grazing" species will also periodically show interest in meaty foods, but the food has to be large, sinking, and stationary. Although they don't usually need meat regularly, in a reef it's a good way to ensure that no animals get desperate for something lacking in their algae diet and go on a spree of biting random corals. I periodically offer my urchins scallop meat and they will sometimes collect flake food from the surface too in areas of low flow.

Algae wafers works sometimes, but are not the best bet since they tend to disintigrate too fast (they basically have to be handed to the urchin directly, not dropped in the tank) and individuals will also just reject them.
You must log in or register to reply here.
Share:
Facebook Reddit Pinterest Tumblr WhatsApp Email Link

S
What do you know about Pondcare's aquatic plant tablets? 10-12-8

Don’t Buy from Aquapl123 On Ebay