Care: Oscars are truly a magnificent fish. Given the best care Oscar's will be your companion for up to and sometimes over ten years! Oscars should be kept in a species tank as they can be quite aggressive, and will kill and /or eat any fish small enough to fit in their mouth. They can be kept with fish of like size, but you should exercise caution when doing this as aggression issues can occur. Possible tank mates include Jack Dempsey, Convicts (one or more of the same sex, as a breeding pair will become VERY aggressive), Tinfoil Barbs, Silver Dollars, Spotted Silver Dollars, Bala Sharks, Common Plecostomus, Clown Loaches, Pictus Catfish, and African Brown Knife. Do understand that some of these possible tank mates are schooling fish or the fish can get quite large so do your research on size and minimum tank requirements before you add them with an Oscar. Oscars require a minimum tank size of 75 U.S. gallons or bigger for ONE Oscar. Remember, bigger is always better. A good filter and regular water changes are required as Oscars are messy fish. They spit out as much food as they eat and they produce a great deal of waste. Oscars can and do sulk for any reason. A simple change in environment can set up a sulking phase. Usually there is no need to worry about this, as it is natural, but it is always a good idea to check things like incorrect water temperature, too much food, new surroundings, poor water conditions, etc. Water temperature between 72-79F, and pH range between 6.0 - 8.0 and dH range between 5.0 - 19.0. Oscars are clumsy fish so you should stay away from sharp decor. They are also destructive so live plants are not advised. Under gravel filters are not a good choice with Oscars as they are diggers.

Feeding: Oscars need a varied and interesting diet to promote good health. Some sort of cichlid pellets (such as Hakari Cichlid Staple) is great as the main part of their diet, but they also need live foods to promote good digestion. Good choices are crickets, insects, worms, and sometimes feeder fish. It is best to raise your own feeders as store bought feeders can introduce disease into you tank. Other good foods for your Oscar are beef heart (although it can be quite messy it is really good for them) turkey heart, shrimp, krill, and other really lean meats. It is good to also have frozen shelled peas on hand. Peas are great for helping with constipation or just keeping the them regular. Oscars have also been known to eat other vegetables such as lettuce, zucchini, cucumbers, etc. I also suggest soaking their pellets in some kind of liquid vitamins (like liquid Centrum) from time to time. This keeps them from getting diseases like HITH (Hole In The Head).

Sexing: Unfortunately, it is very hard to tell the sex of an Oscar. Oscars are unlike most other cichlids. The do no show external features that would normally help determine sex. The only certain way is to catch a pair when they are breeding and the breeding tubes are exposed. The female's tube is bigger, and rounded at the end. The male's tube is smaller, and pointed at the end.

Breeding: Oscars will pick one mate and have batch after batch of fry once they get started. They are egg layers and have anywhere from 200 - 2000 eggs at once and do this about every month. They will usually lay their eggs on a large flat rock such as slate. Oscars are very diligent parents, protecting their eggs/fry aggressively. Do not have any other fish in the tank with a breeding pair as they will most likely seriously hurt or kill other fish to protect their young.

How to breed oscars:
Getting Ready: You will need at least three tanks. 1) A 180 U.S. gallon tank to establish your mating pair if you don’t have them already. 2) A 100 U.S. gallon tank for the parents-to-be. 3) At least a 55 U.S. gallon tank for the fry to grow out in. Breeding Oscars is not for everyone and especially not for people new to the fish keeping hobby. In my opinion they are hard to breed, but when they do spawn they can have anywhere from 200 - 2000 fry at a time and they repeat this process every month or so! You need to have some way to get rid of all these Oscar fry and even as popular as they are this can prove to be a daunting task. Before you take up breeding Oscars, keep in mind that it can be quite hard to sell or find homes for 200 - 2000 fry every month.

Getting the Mating Pair: Chances are that you will not get a mating pair by going in to the pet store and picking out two Oscars. The best way to go about getting a mating pair (although this method is still not guaranteed) is to buy about six (6) juvenile Oscars and keep them in a tank together and let them pair up naturally. As you know Oscars are large, messy fish that can be aggressive so a large tank is necessary for this. (a minimum 180 U.S. gallon as mentioned above) When the Oscars have paired up you can remove the pair to the 100 U.S. gallon parents-to-be tank (also mentioned above). The rest of the Oscars in the tank can be returned, sold or kept if you are up to the task. If you do decide to keep them, remember Oscars require lot of care and attention.

Getting the Pair Ready to Breed: Now that you hopefully have your mating pair you will need to get their home ready for breeding. You need at least a 100 U.S. gallon tank with good filtration and pea sized or smaller gravel or sand as a substrate. You will also need a large flat rock such as slate and a cave or pot. You can decorate with driftwood and such but I don’t see this as necessary. Keep up with your water parameters (as you always should) and change the water regularly. All you have to do now is watch for the mating ritual signs listed below.

Mating Rituals: Mating rituals include moving the substrate around in the tank, cleaning the slate and rubbing against the rocks or slate, shimmying their bodies and fins against each other, and lip-locking.

Breeding: When you start to see the above mentioned signs of mating it is suggested that you do a rather large water change of about 75% and raise the temperature to the middle 80’s not to exceeding 85° F and subdue the lighting. This helps encourage the mating process. When they are ready to lay and fertilize the eggs they will start spending a lot of time around the area they plan on having the eggs. (usually the flat rock/slate) Two females have been known to go through all the motions and even lay eggs, so you could still not have a male/female pair. It also needs to be mentioned that it may take several times for them to get it right. Don’t get discouraged if they don’t have fry the first, second, or even third time. When you do have eggs make sure they are fertile. The way you do this is by the color of the eggs. After about 24 hours, if the eggs are white they are not fertile. They will be a yellowish or tan color if they are fertile. All unfertilized eggs need to be removed. Just be careful of attacking parents. Oscars are very diligent parents. They will guard the eggs/fry very aggressively. I also need to mention that there should be no other fish in the tank with a breeding pair. The parents will attack and can seriously hurt or kill anything they see as a threat to their eggs/fry.

Soon to come 'How to Raise the Fry' 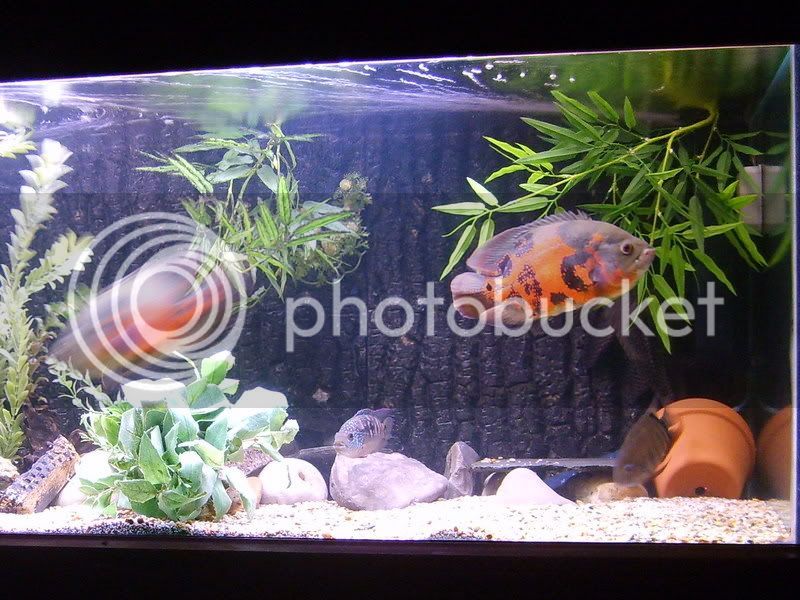 just though i would add my pics of my tiger oscars, both about 10-11" in size and had them for about 7 years now and starting to show signs of HITH now such a shame, but they have had a good life making this tank there own! 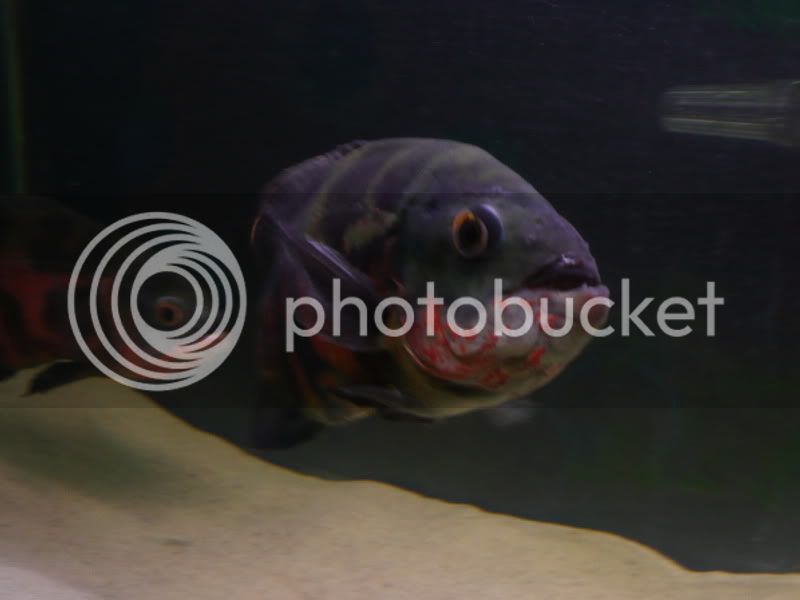 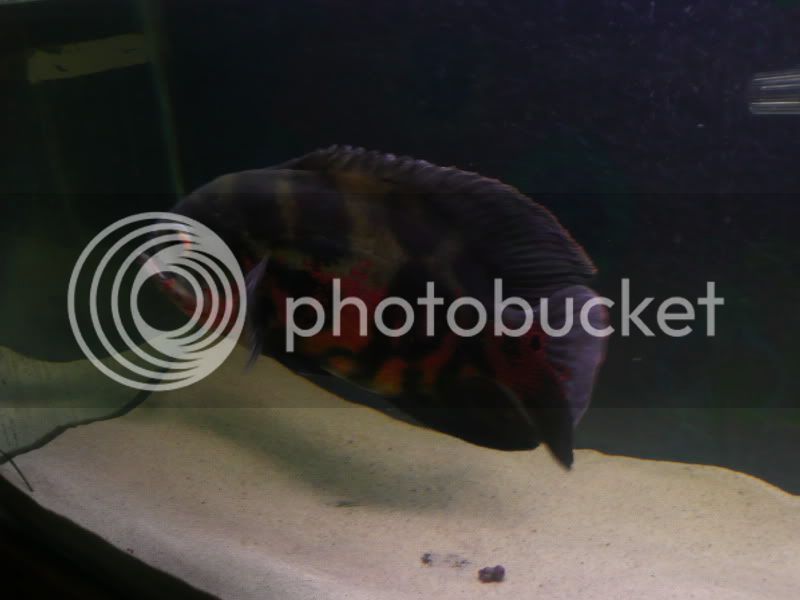 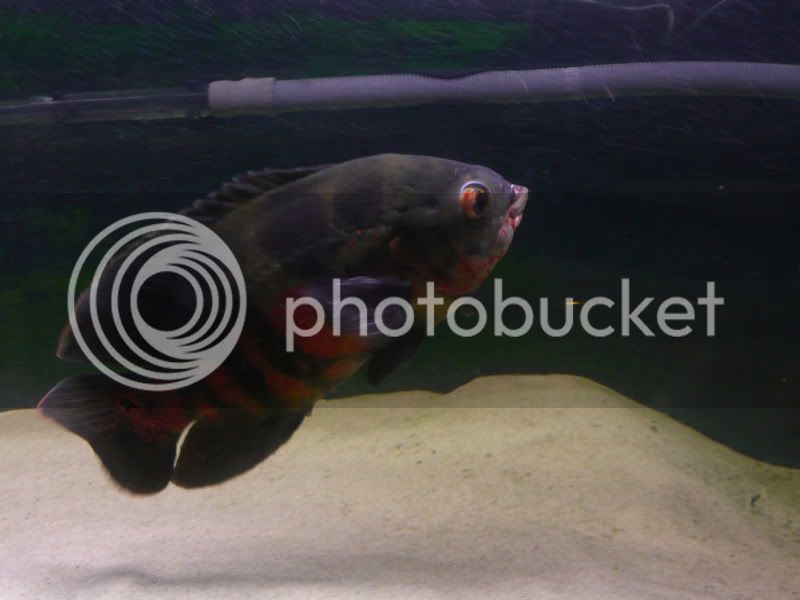 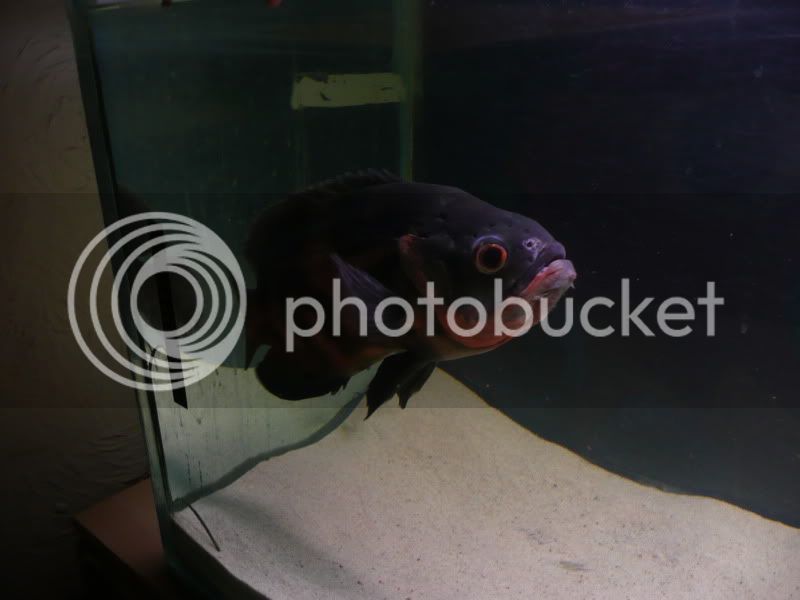 p.s i cant believe how true it is about sulking too, i just installed my new filter and put the inlet across the back of the tank and they been sulking all day sat in the corner lol

W
Help needed - mysterious cause of death for all fish. 4 remaining but not doing well.

R
Is it had to mix other Corys?