The day before yesterday I bought 3 dalmatian mollies for my tank. I noticed that sometimes my mollies (one in particular) move to the surface, where they just 'float'. He won't move and he won't eat. When opening the lid, the one molly I'm worried about will move and swim around, but he goes back to the same spot and stay there when the lid is closed. The other two mollies sometimes stay at the surface, but not as long as that one molly. The other two mollies sometimes stay motionless at the surface for a few minutes, but go back to swimming after.
The tank has been set up before buying the fish for about 10 days. I used easybalance, aquasafe and safestart (all by Tetra) to prepare the tank. I have a pump and a heater set up. The temperature of my water is around 24 degrees C (75 F). I got several plants and decorations in my tank.
NO3 and NO2 levels are both 0,
GH is >16 dGH,
KH is 10 dKH
CL2 is 0.
I have not checked the NH3 or NH4 levels, could this be the problem? Or not having a air stone? ( I was told I didn't need an air stone, but maybe that's the problem)

I hope to solve this problem 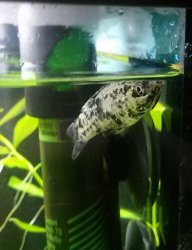 S
Plants out of water?

When you give only one pellet...

molly just stay at the surface