Getting Started On A 5G Nano Reef In A Fluval Chi

I am interested in diving into the world of saltwater and reef tanks and I have a Fluval Chi lying around that I think would look pretty awesome as a nano reef, BUT I am pretty lost on where to start. What equipment will I need? How do I feed corrals? What chemicals will I need?

Thank you for your help!

Some corals feed, but many do not. A lot of people run into trouble polluting their tanks while trying to feed corals that really don't need it. In a tank as small as the Fluval chi, I would absolutely recommend against feeding for the pollution reason. Most corals in the trade are primarily photosynthetic, and the non-photosynthetic species that rely on feeding are actually rather challenging to keep alive. Some photosynthetic species like certain large soft polyps and large-polyp stoney corals (LPS) will feed on meaty foods and the feeding can help them grow faster, but light is still far more important. Any sort of more specialized nutrient or fine particulate dosing beyond that is a pretty advanced thing that is not good to try in even a much larger first marine system.

Be aware that a Fluval chi will actually be quite hard as a starting system because of three things:

1. It is totally tiny in the marine world (5gal). It falls into a category many would consider a "pico" tank, which are the hardest systems to maintain longterm. 50gal is considered a much better starting size, since extra volume means more room for error and more stocking possibilities. Even a 20gal (still a nano) is a better starting size than a 5gal.

2. The stock lighting will not support corals. If you want corals, you would need to mod the system to have a more powerful, marine spectrum light.

Uh well your going to need to buy about 5 pounds of live rock. (More is better).
You would need to use RO water which stands for (Reverse Osmosis).
You will need to cycle for about 4-8 weeks.
As stated above you won't need to feed lots of corals.
You will need to upgrade your lights to keep any corals.
Also your tank might be small but don't give up! Personally I think my 10 gallon is easier to keep than big marine tanks.
Good Luck
OP

Well.. it's happening! Here it is! 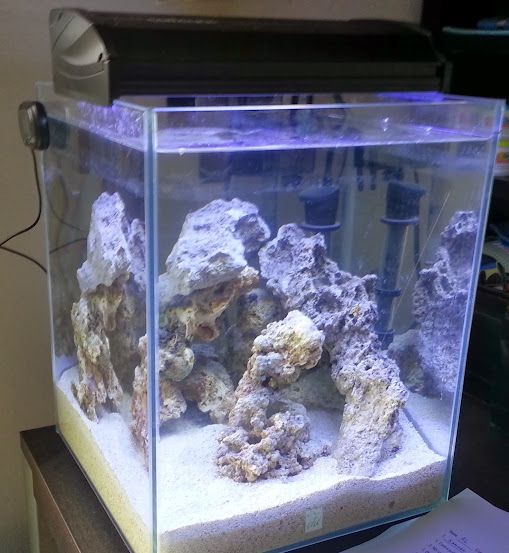 looking great Sam. I really like the rock arrangement!
OP

Thanks! I have added a couple corals as well as a bit of a clean up crew. Pictures to come soon.

Looks great so far.  You're making me want one now.

Thanks Ryan, It's going really well, you can check out my journal on the tank here: http