No worries. c: Lymphocystis is a "make the fish as comfortable as possible and wait" type of disease, so there's not too much anyone can do. All I can do is hope the cyst doesn't bother his swimming or eating. Some fish even live the rest of their lives with the virus.
OP

Moving onto the snack dose part of the cycle! I'm thinking the tank will be done before Halloween.
No more fuzz on Ronan! I had some issues with the heater recently, though. We had a sudden cold spike over here (it got to the oh-so-freezing temperature of 35°F ) which threw the heater for a loop, made the temp in the tank drop to 74°F. The tank is next to a window, I suppose that did it? Anyway, it's back up to 78°F, and the 20gal is 82°F. 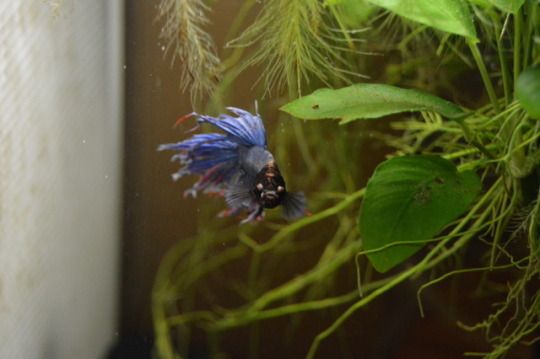 Ronan's cyst has slowed down a little. He's still wiggling about! 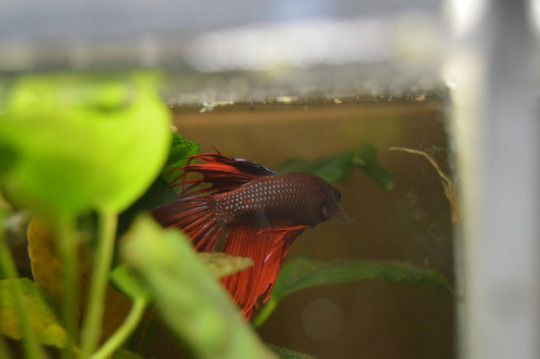 Magnus will not pose unless he is paid in pellets.
OP

The tank is onto the final stages of the cycle. I couldn't tell if the API ammonia test read 0 or .25,but either way, the 20 gallon is very close to being cycled. I'm going to go my "L"FS (hour and a half away) to get some plants tomorrow. Hopefully Pennywort, Hygro, Crinum, or if all else fails, more Anubias
N

Just got back from the LFS. I purchased eight ghost shrimp and two tiretrack nerites. Pictures later, when they're in the 20gal, since all of them are in a breeder net in Ronan's side of the tank.
As far as plants go, I got a couple bunches of Pennywort, and a mystery plant for two dollars. It looks like some kind of Ammannia, maybe Ammannia gracilis? It's a little underdeveloped. My research says it likes extra CO2... hopefully it doesn't melt away immediately. If it has too much trouble, I'll throw it into the 90gal.
The store I got the Pennywort from also had Moneywort and some variation of Hygro, but I hadn't researched Moneywort, and wasn't sure if that kind of Hygro would grow. It was very lush, almost purple-ish. I also thought the better LFS ten minutes away would have a better selection, as they usually do, but... they didn't. I didn't have time to run back to the first store. I'm a tad disappointed in myself for not just buying the Moneywort and Hygro, but I can always go back some other day, or steal from the 90gal.
I'll test the 20gal again tonight, and if it's ready, there'll be pictures tomorrow!
OP

Bah, I lied c;
The nerites! (with a pellet) I wasn't sure if one would make it, but it perked up with warm water: 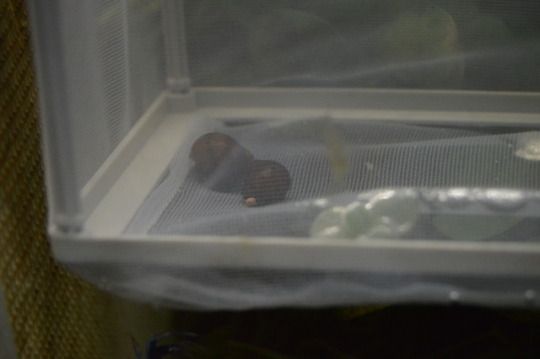 And a couple ghosts, barely visible through the mesh: 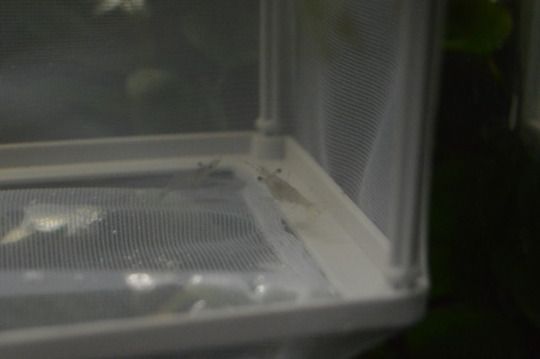 Pennywort, a little ratty, but living. Taken at an odd angle because it's in the very back of Ro's side: 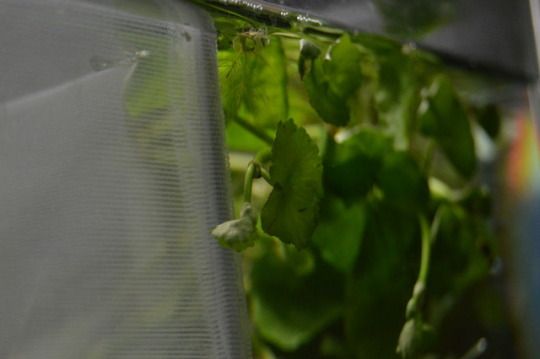 And the mystery plant, the stems are over a foot long. I'll need to trim it up a little, cut the melted and leggy bits off: 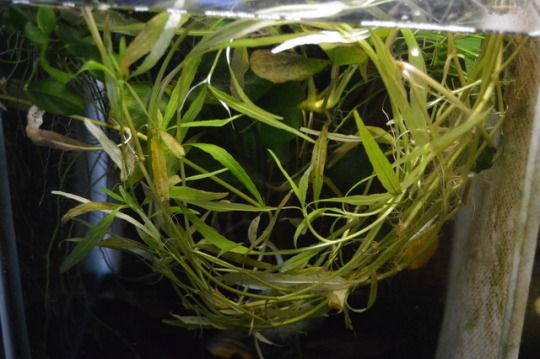 FTS of the 10gal. Lots of diatoms with the new lamp: 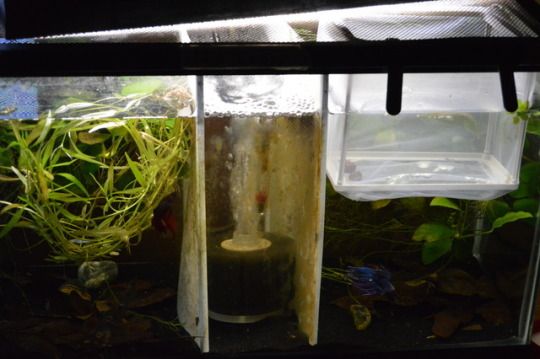 FTS of the 20gal. Plus tannins: 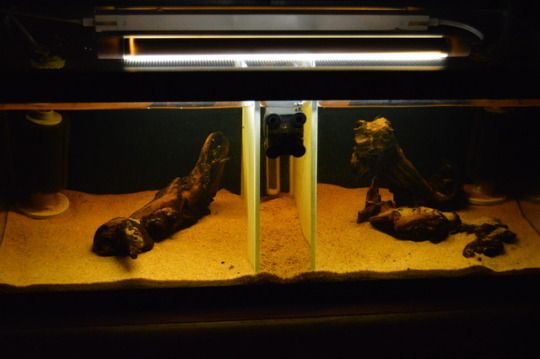 Forgot to mention above, I also purchased some Flourish root tabs to give the Amazon sword a boost.
N

Good to see the snail is already eating.
OP

Everybody's in the 20 gallon! I'll have pictures up later tonight. I'm pretty happy with the aquascape, it turned out a little chaotic, in a good way.
I'm sad to say that I lost five shrimp. My heater did the thing again, when I checked the temperature (the thermometer was in the 20g), it was at 74°F. Not sure if I can trust that heater for too much longer. I can't find the three shrimp I put into the 20gal, but they were grazing the last time I saw them. Hopefully the deaths weren't caused by something like copper in my tap water.
More sad news, unfortunately. Ronan's lump had a little growth spurt, and now it seems like it's bothering him. He's clamping his fins and resting too much to just be tire from long fins. Right now, he's resting at the foot of his amazon sword. He had a grand time learning about rooted plants, driftwood, and how play sand can't be eaten, though.
Magnus flared at everything, got tickled by a ghost shrimp's antennas, and inspected every bit of sand he could see.
OP

I saw a shrimp grazing under the oak leaves! 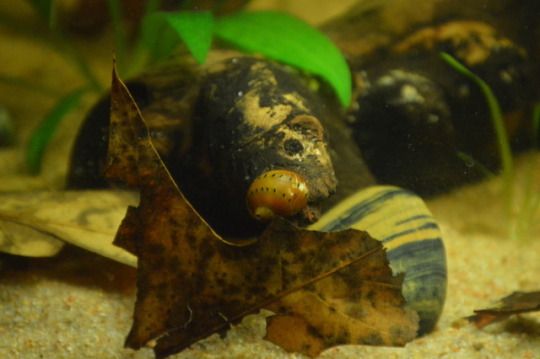 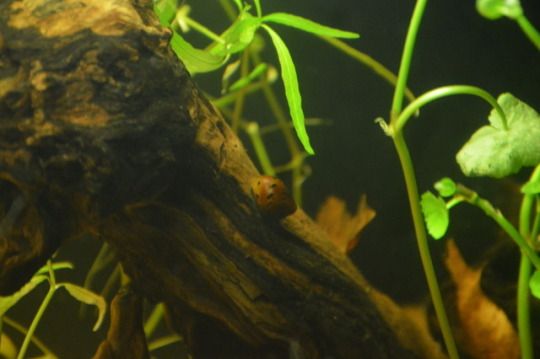 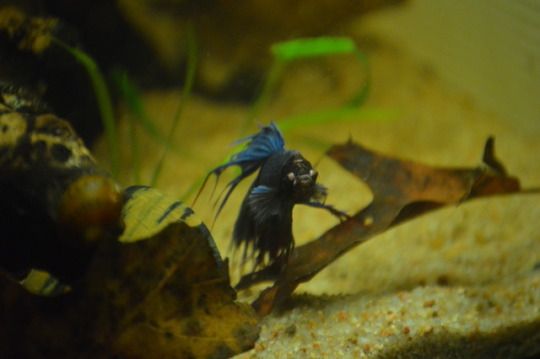 And a sort of decent picture of the lump: 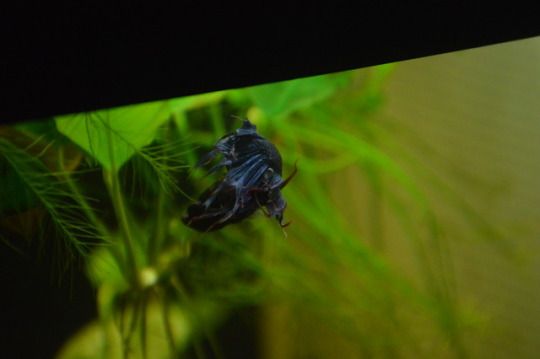 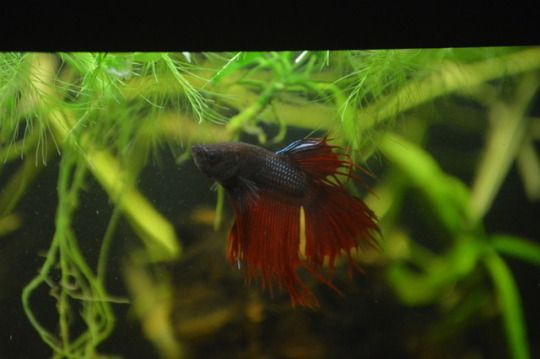 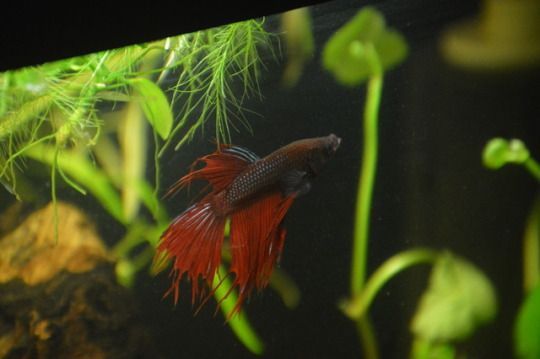 FTS will be posted in a minute.
OP

It’s a bit of a mess, but I kind of like it! c: I think I'll start dosing ferts after everything has melted. Plant list below.
Anubias frazeri/congensis, nana, and barteri? Not totally sure on those, I’ve had them for a while.
Vallisneria sp.
Cryptocoryne parva, spiralis, wendtii and lutea? Again, not sure on those names.
Pennywort, some form.
Amazon Sword
Unknown stem plant, may be some form of Ammennia?
Dwarf Water Lettuce 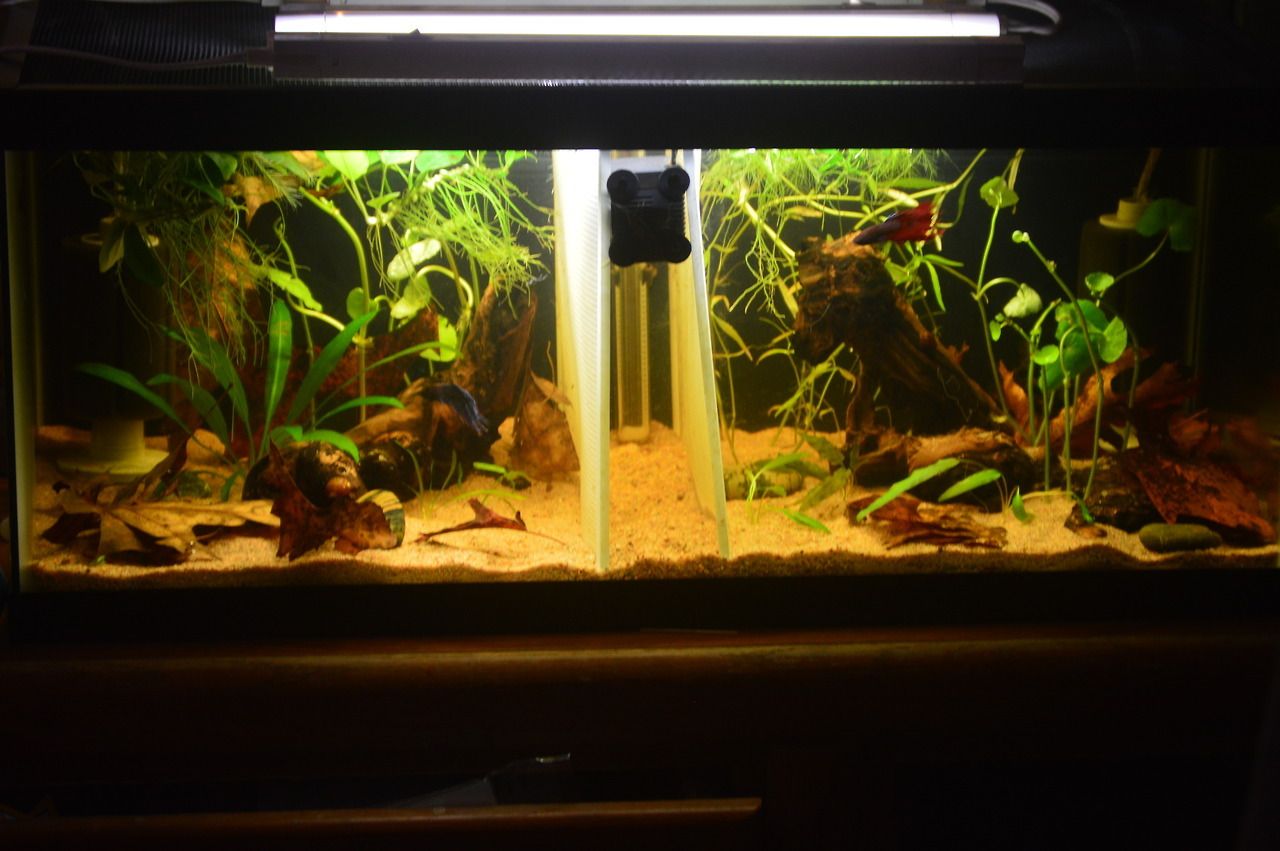 Ronan's side, with one shrimp and a nerite: 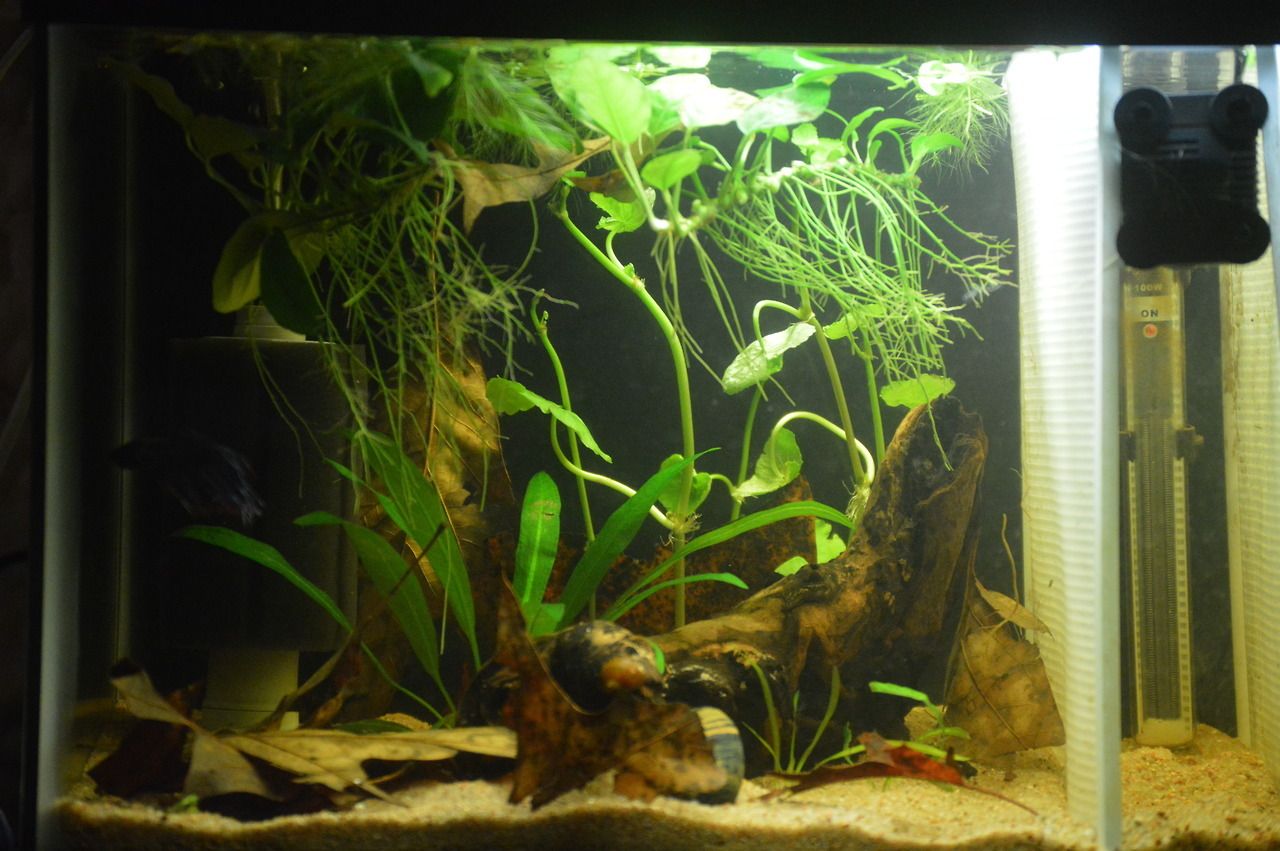 Magnus's side, with two shrimp and a nerite: 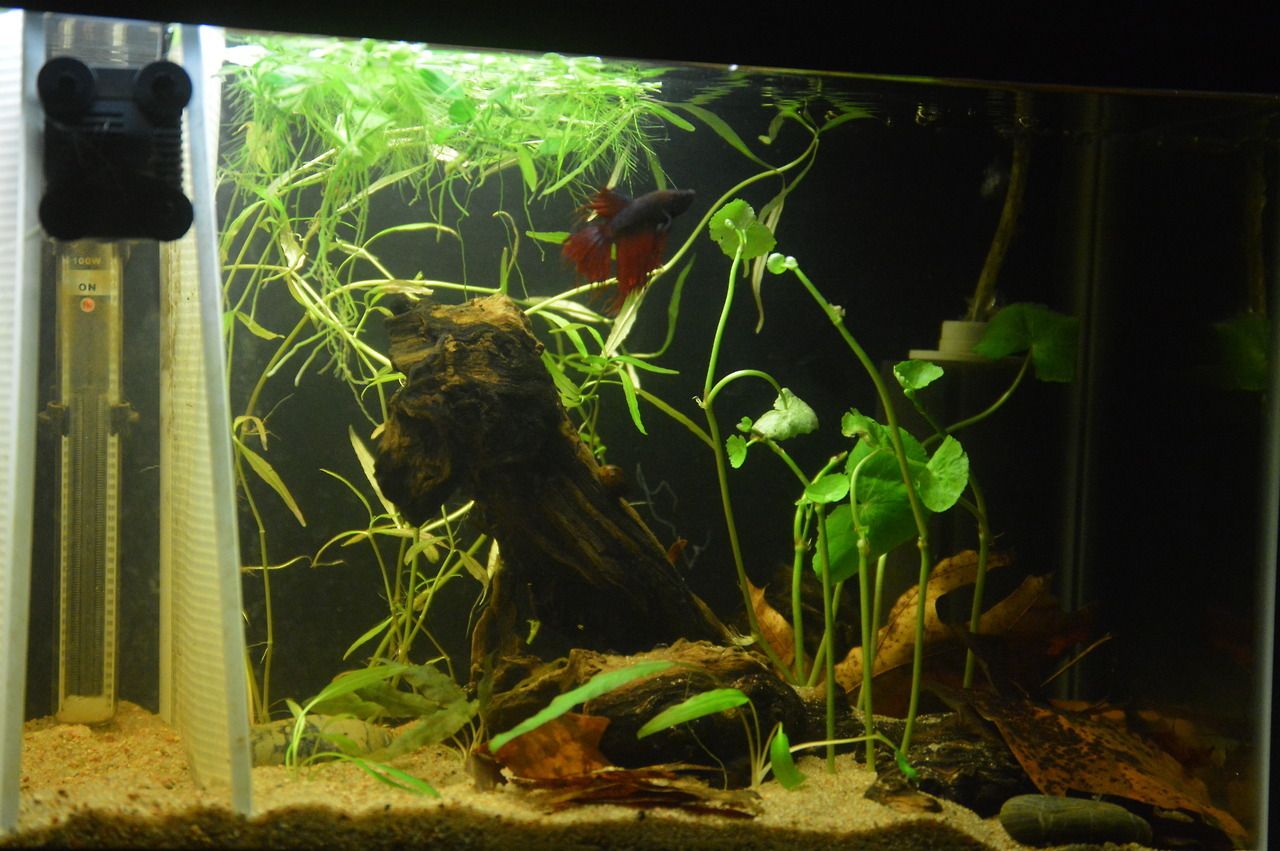 Have you considered covering those dividers with some plants?

I haven't! I figured I'd kill any plant that would cover them, but really does look better than mesh o: I have the heater and a pump in the center compartment, do you think the plants would hinder the flow or heat?
N

At first no, If they do some strategic pruning would fix that.
OP

Sorry about the absence, family stuff came up. No pics yet, the below is just a brain dump on stuff that's happened so far.
Ronan is slowly declining. His colours have greyed out a little, he's got a faint stress stripe, he's laying on the floor more, and his growth is bleeding. I'm not sure f ympho needs, but I know cancerous tumors can.
The snail on his side of the tank died. It fell off of the mopani and landed on its back. I flipped it over, it got stuck on the sand, I moved it onto the mopani to give it something solid trip so, but it never moved after that. I'm not sure what happened, the other one is grazing around like nothing happened.
Magnus seems to enjoy the new tank. He was doing laps yesterday, poking around in the leaves, inspecting the water lettuce roots... he's a pretty active fish He had a suspiciously large stomach yesterday, though. Not sure how many shrimp I have left. I can usually find one if I poke around in the leaves, but I don't like stressing them out.
The plants have already turned toward the light! They're beginning to melt, but I should have ferts in after this weekend. The mystery plant is doing surprisingly well. Good stuff for two bucks
You must log in or register to reply here.
Share:
Facebook Reddit Pinterest Tumblr WhatsApp Email Link

F
Questions about my Betta

Help! What did my catfish die of and is it contagious?