Can someone help identify a couple of plants?

This past year, it was recommended that I add more live plants to my aquarium, so I did.

Previously I had one Amazon Sword, but it never really grew very well. I figured it was due to my lack of experience and general history of killing every plant I've tried to take care of. But I'm always up to a challenge, and someone on this forum recommended a product called "Flourish Comprehensive Supplement for the Planted Aquarium," and it's worked really well. My Amazon Sword has tripled in size over the past 6 months.

My second plant was the one with the large stiff green leaves. The LFS said were it was a slow grower but easy to maintain. After having it for a while, I noticed long stringy dark threads growing off the sides and tops of the leaves. At first I thought it might be sick, and disintegrating, but then new leaves popped out of the tops of the strings and I realized this was new growth! And later I realized that they could be pulled from the tops of the old leaves and planted. That little grove in front is from the tops of the longer leaves. And they are starting to take off.

The other plant I can't identify is the long stringy green grass that was floating at the LFS so I floated it here. (very inexpensive plant: 50¢ per) Some leaves pull away from the roots, and die, but most are doing okay and are getting longer.

The last plant is a Water Lettuce (I made a note when I bought it). This plant was recommended online as an easy floating plant to take care of, and floating plants were recommended because I was told the fish I keep are used to canopied streams. I just added this one last week, and realized as I added it that I'll never really see the pretty part because the lid of my tank will hide it from me. The roots are kind of cool, but I'll have to see how it does in the long run. You can see the roots hanging down one among the green grass plants.

Anyway, I think I should know what I have in my aquarium, so if anyone recognizes the long green leafy one, and the green grassy ones, I'd appreciate the identification. (and I'll add it to my notes for future reference) 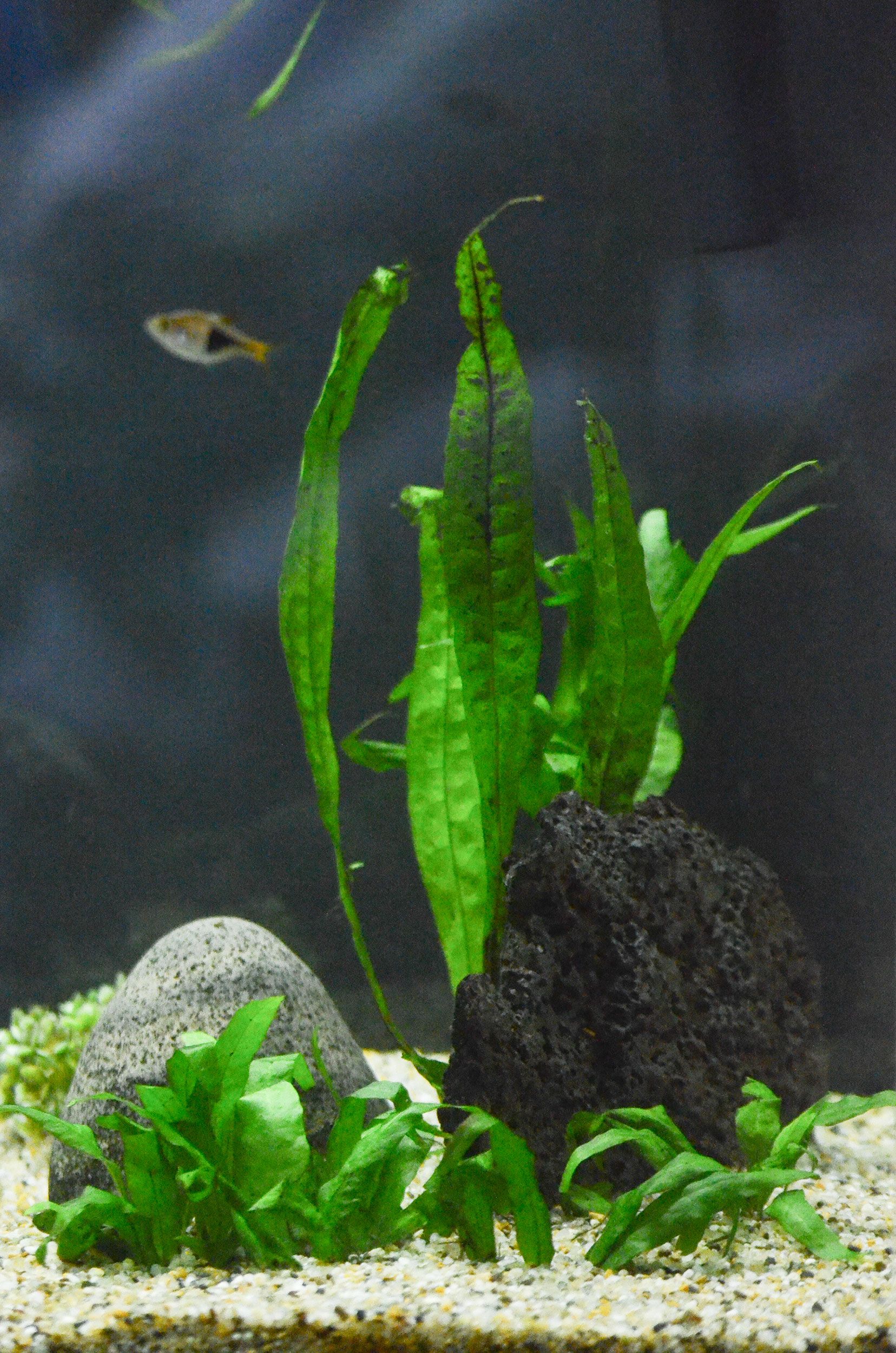 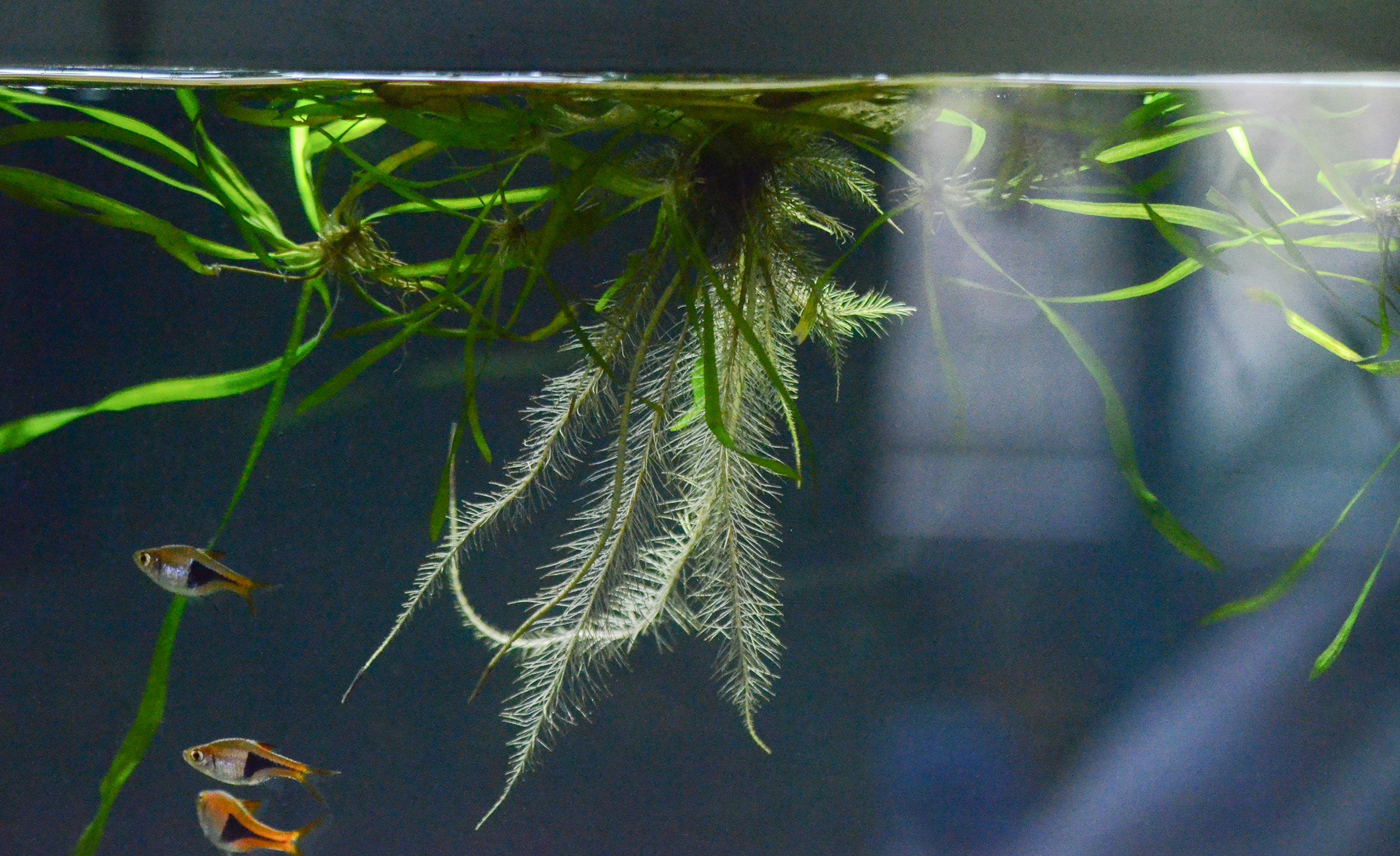 The first photo is Java fern. It should not be grown planted in the substrate. To be precise, the thick 'root' should not be buried, but it is OK to bury the hairlike roots. The thick 'root' isn't a root at all it is a rhizome, and will rot if buried. I attach mine to wood using sewing cotton. By the time that rots away the plant has attached itself.

Long thin plant that is floating is Vallisneria (probably Narrow Vallis). It should be planted and does not do well on the surface.

Water lettuce does not normally do well in aquariums, especially if they have a cover glass. The covers increase humidity and cause the plant to rot. Outdoors in a pond it does very well in warm climates but will not tolerate frost or ice.

Good floating plants are Water Sprite (Ceratopteris species) and Duckweed. Water Sprite being my personal choice of the two, altho duckweed makes an ideal food for any fish that eats plants and can be grown in tubs outside and brought in weekly for the fish to eat.
Water Sprite can also be planted in the substrate and makes a nice aquatic shrub.
OP
M

Thank you both for the responses. It is so strange that at my LFS, the Java Fern is planted and the Vallisneria is floating. I will plant the Vallisneria, and attach the fern to some rocks.

I read this about Java Fern: http://www.theaquariumguide.com/articles/java-fern-guide

I have looked for Water Sprite and Duckweed, but have not found it in any of the fish stores in my area. I had read that Water Lettuce was an easy floating plant to care for, but had not seen it either. So when I was in an unfamiliar store, and saw a tub with that label, I got excited. However, the tubs were mislabeled so I thought I was buying a flat, small green leaved, almost mossy, water cover. As I was paying the kid bringing me the plant brought in the Lettuce. I was about to ask to redo the sale, but figured I'd give it a try. I have another place I can put it, outside, so hopefully it will do okay there.

I'll keep looking for a proper floating plant and hopefully will find some Water Sprite somewhere.

The Vallis probably got uprooted and left to float when they were taking out other plants.

I get most of my plants on-line as there is very little choice in my local shops. I bought my water sprite from Ebay. But I do have to be careful as I have shrimps and snails so I only buy from sellers who guarantee the plants are shrimp safe - that is, they have not been treated to kill snails.
You must log in or register to reply here.
Share:
Facebook Reddit Pinterest Tumblr WhatsApp Email Link

57 minutes ago
Dondon2
D
R
Help my rainbow is hurting