Just a little thread about the evolution of my 2nd tank that is now a community tank,

I bought it pretty cheap just tank and stand for $50 and originally only planned to use it as a breeder tank for my angels who started laying eggs in my 43 gallon community tank.

Set it up with no substrate, sponge filter and a piece of driftwood with an Anubias attached. Moved my angelfish pair into it and within a few days they had spawned. 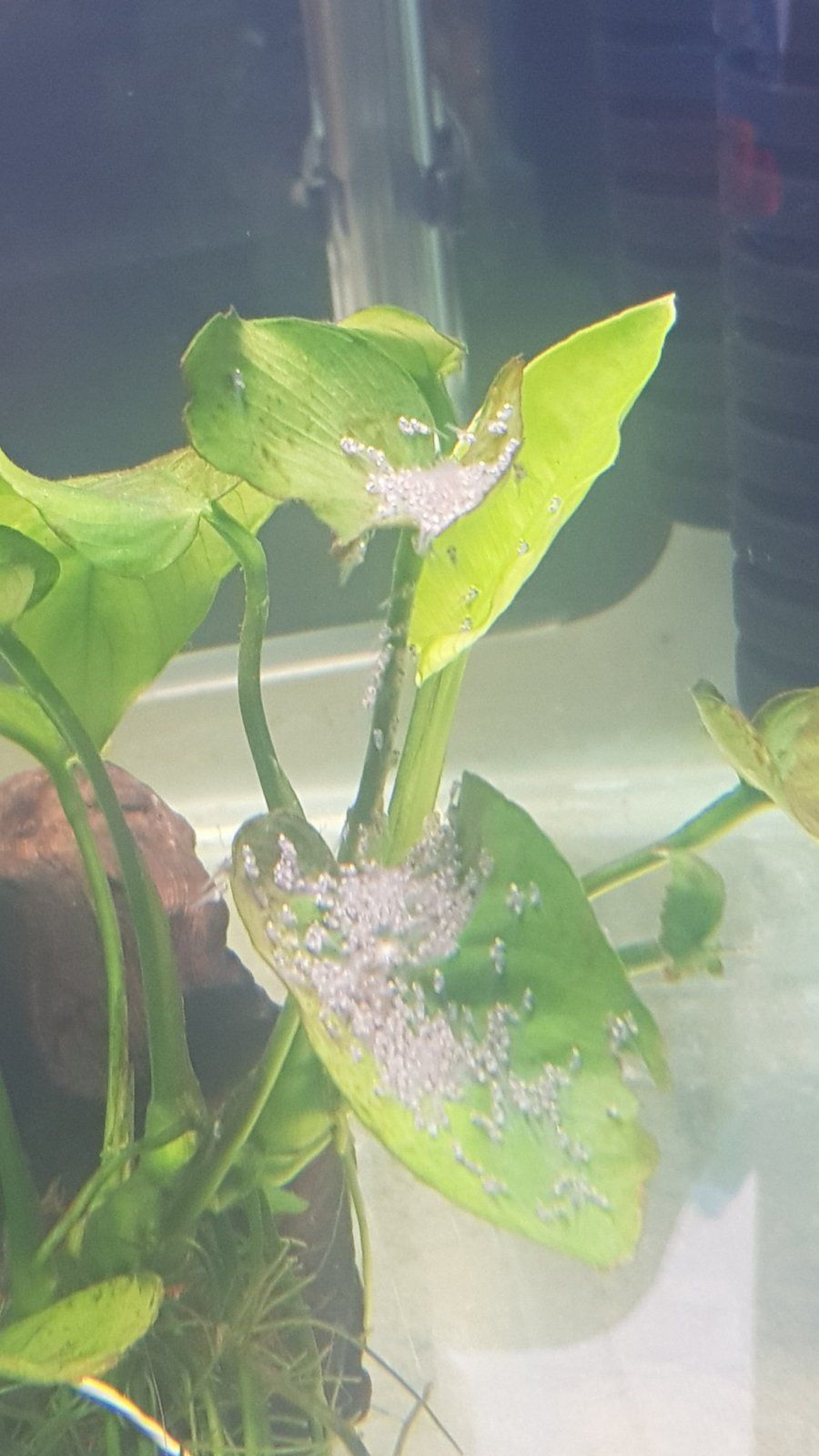 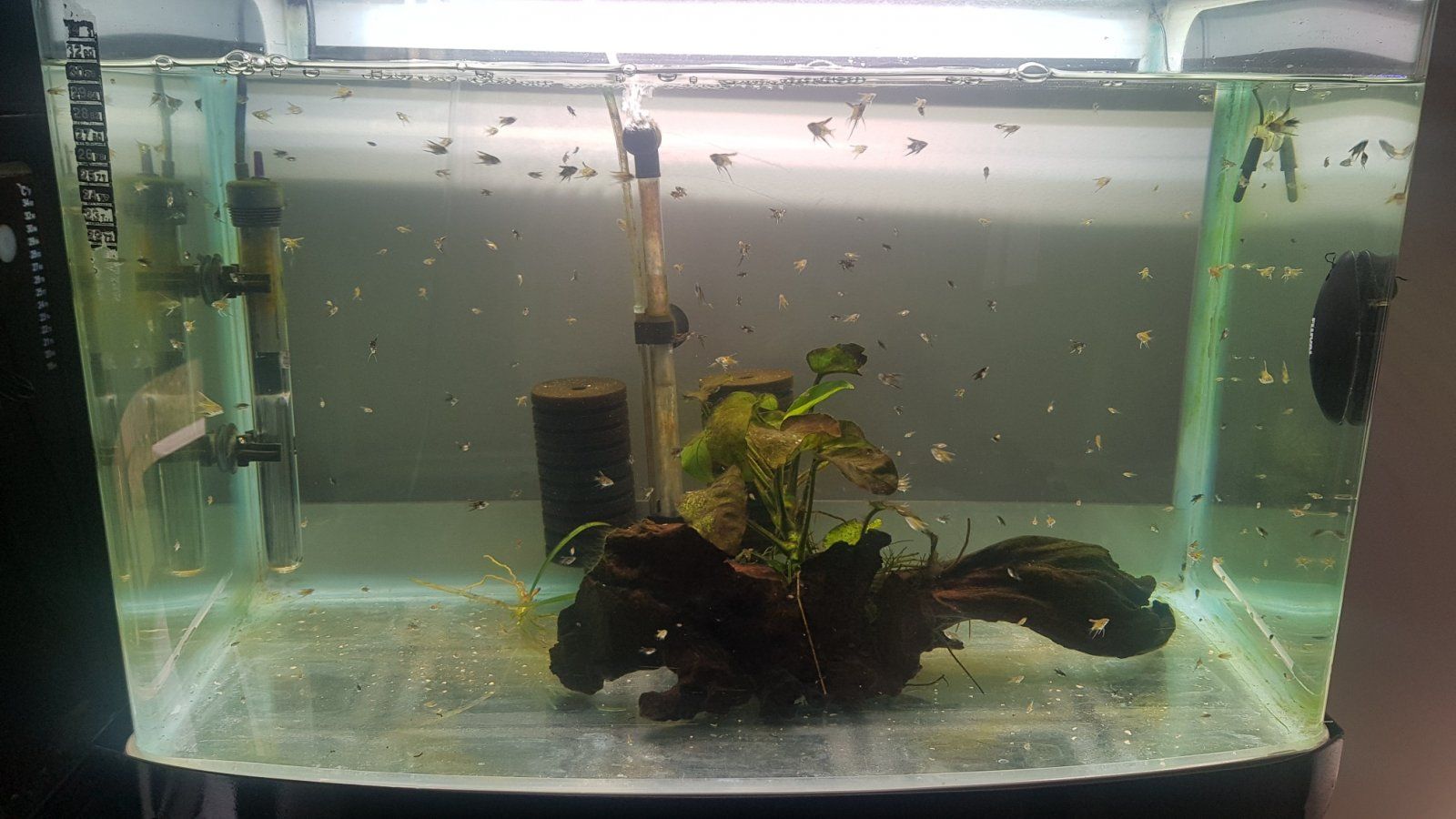 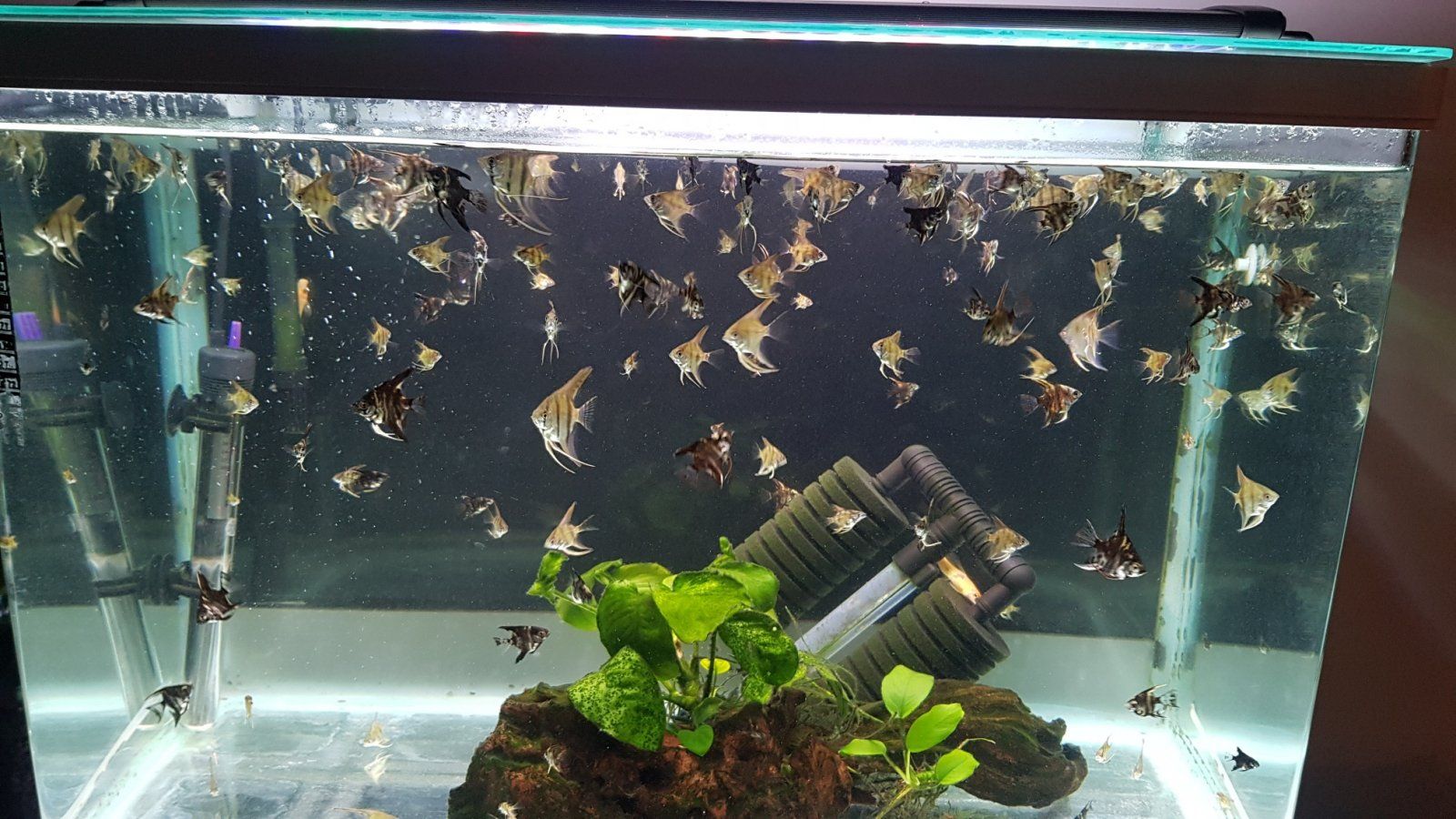 I ended up selling all but 4 of the baby angels which i still have today in my 43gal.

Next i decided to try to breed something different so i got a pair of Kribensis. I set it up a bit differently with a HOB filter, substrate, caves and rocks which the Kribs liked. Within a week they spawned! 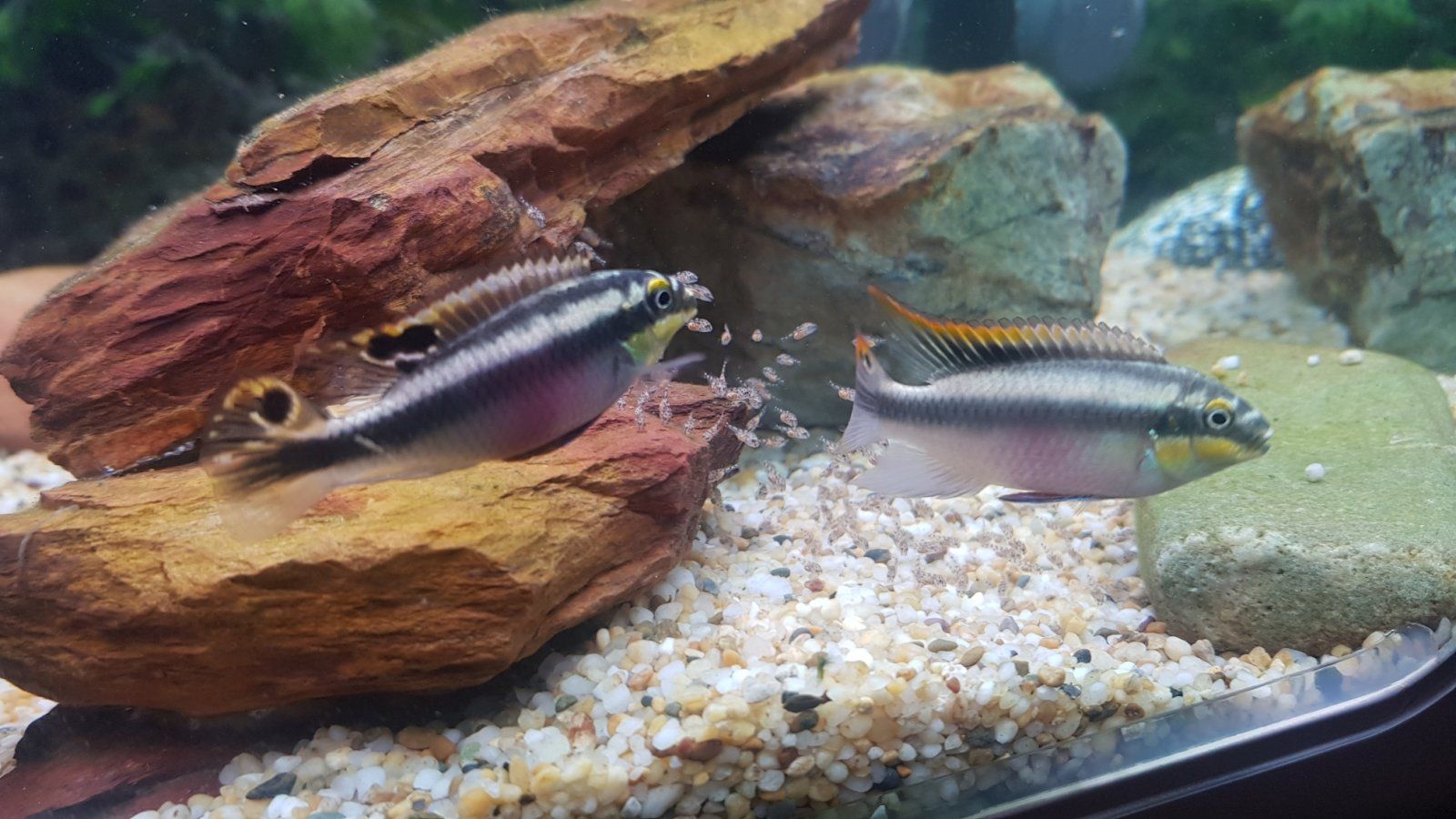 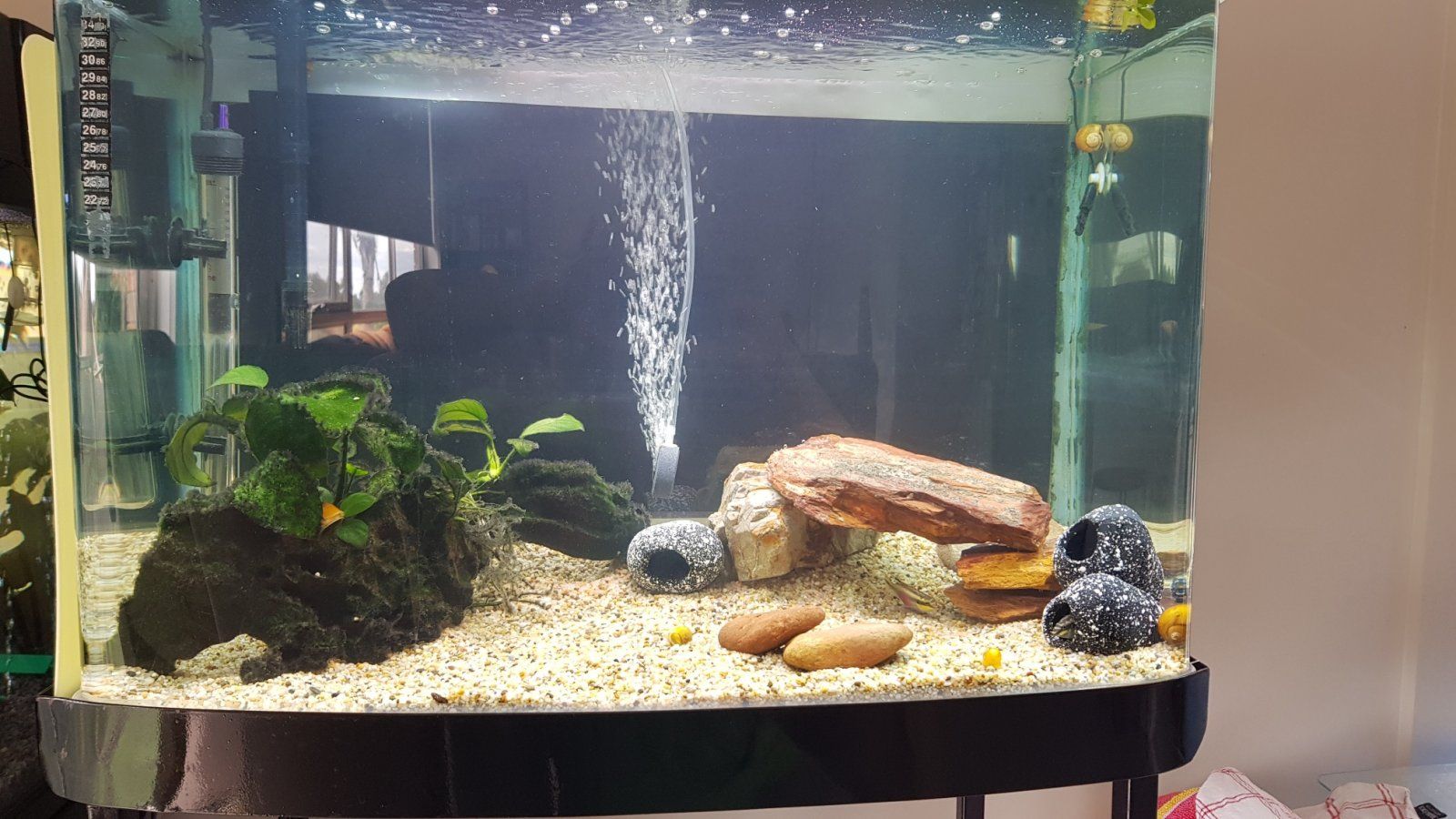 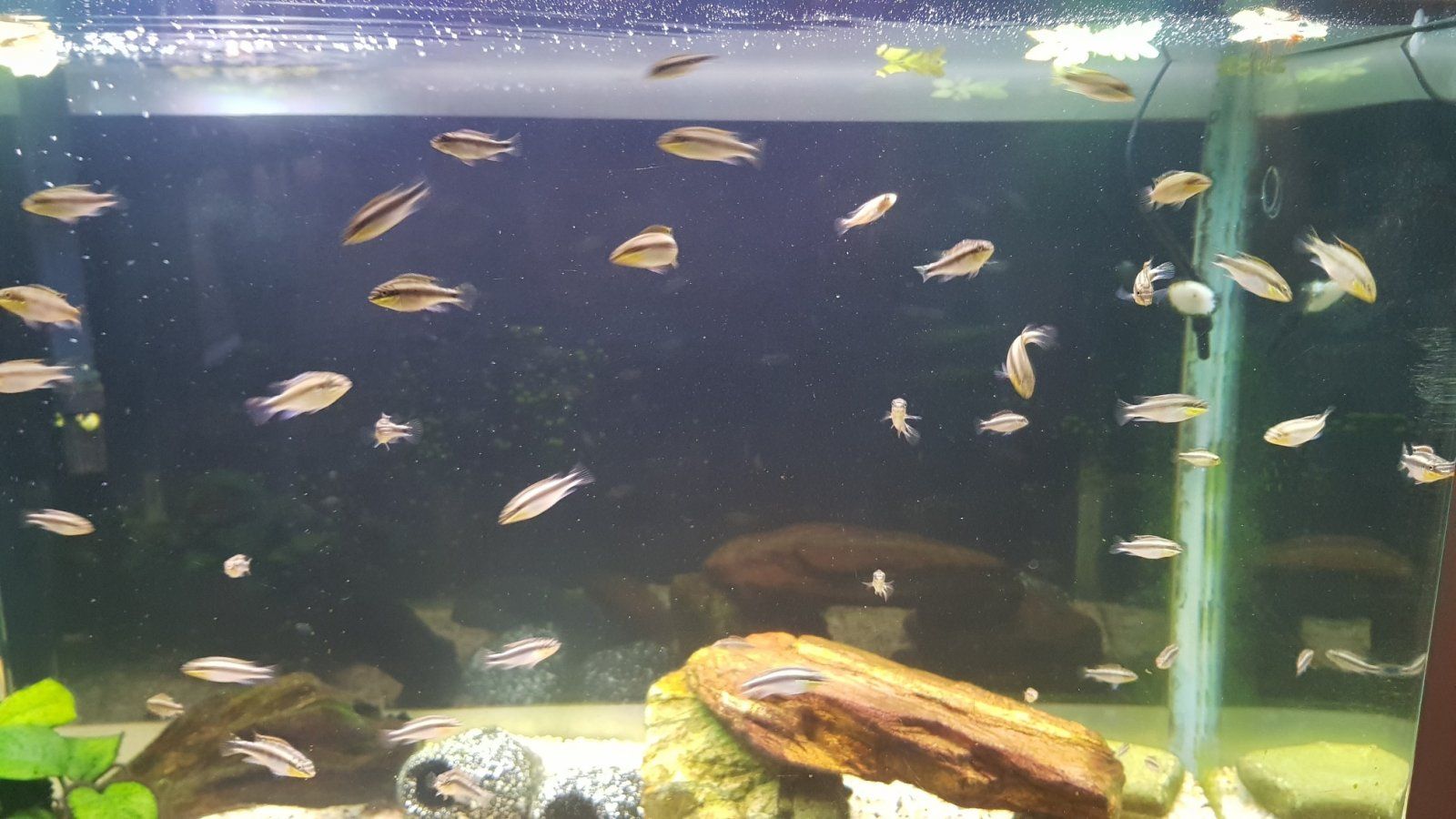 I ended up selling all the babies. Unfortunately the mum died but i still have the dad in my 43gal.

Was going to have a go at breeding German Blue Rams but i decided i've had enough of breeding for now.

I went out and got a whole bunch of new fish that i've never kept before and set it up as a community tank. Now i have 7 Purple Harlequin Rasboras, 6 Red eye balloon tetras, 1 German Blue Ram, 1 Honey Gourami, 6 Kuhli Loaches, 1 Royal Whiptail Catfish, 2 Marbled Bristlenose Plecos and 2 Golden Mystery snails.

Got some better filtration going with an Aquaone Ocellaris 850 canister and ditched the HOB filter after a few weeks, gave the canister time to build up some good bacteria. 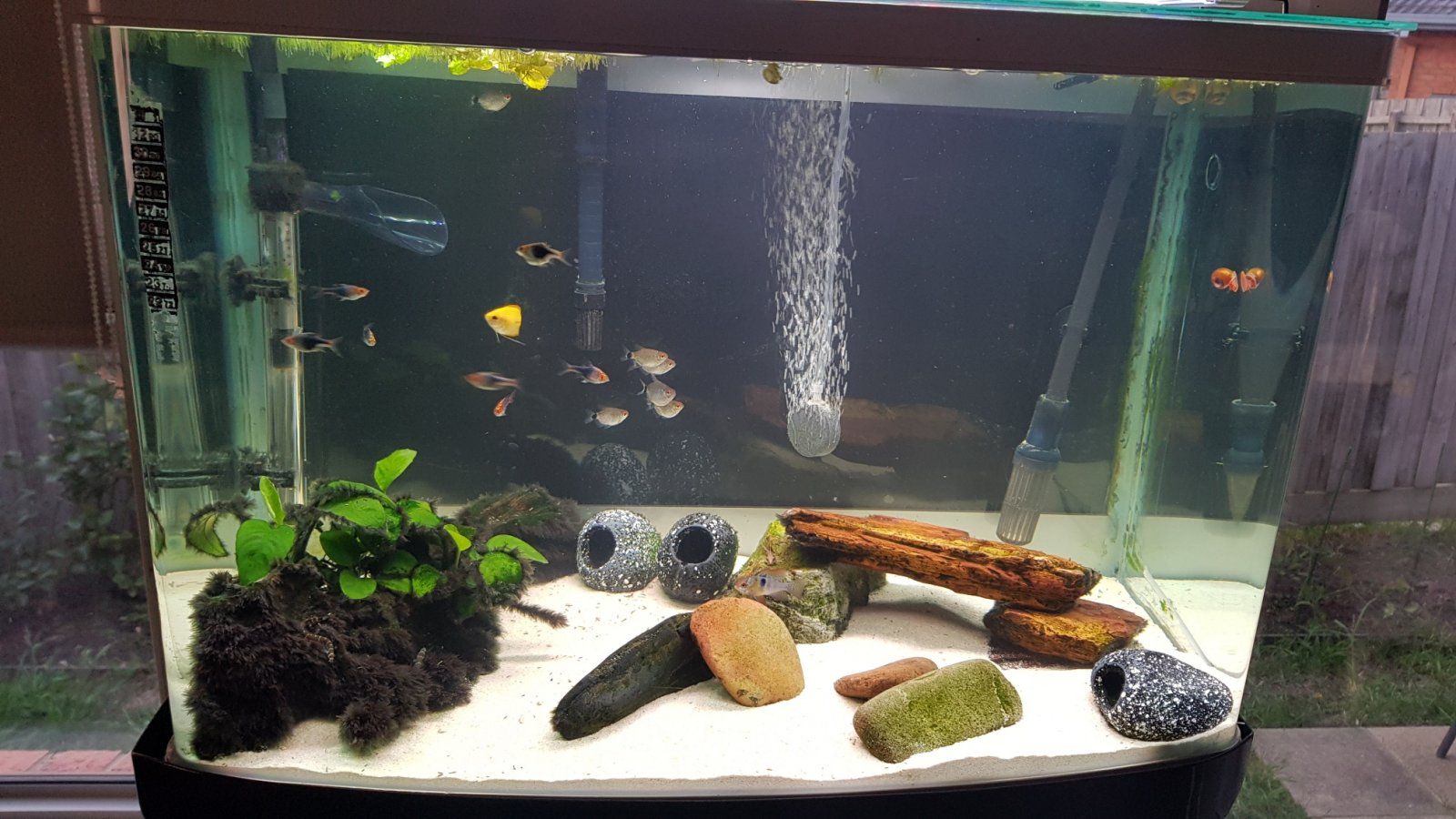 After getting a bit bored with the tank i decided to change it up a bit. I removed the BBA covered driftwood, all the caves and rocks.

Then i moved the sand from the back to the front and added some coarser sand in the back.

Added a few plants and some new rockwork. The fish seem to like having more plants now! 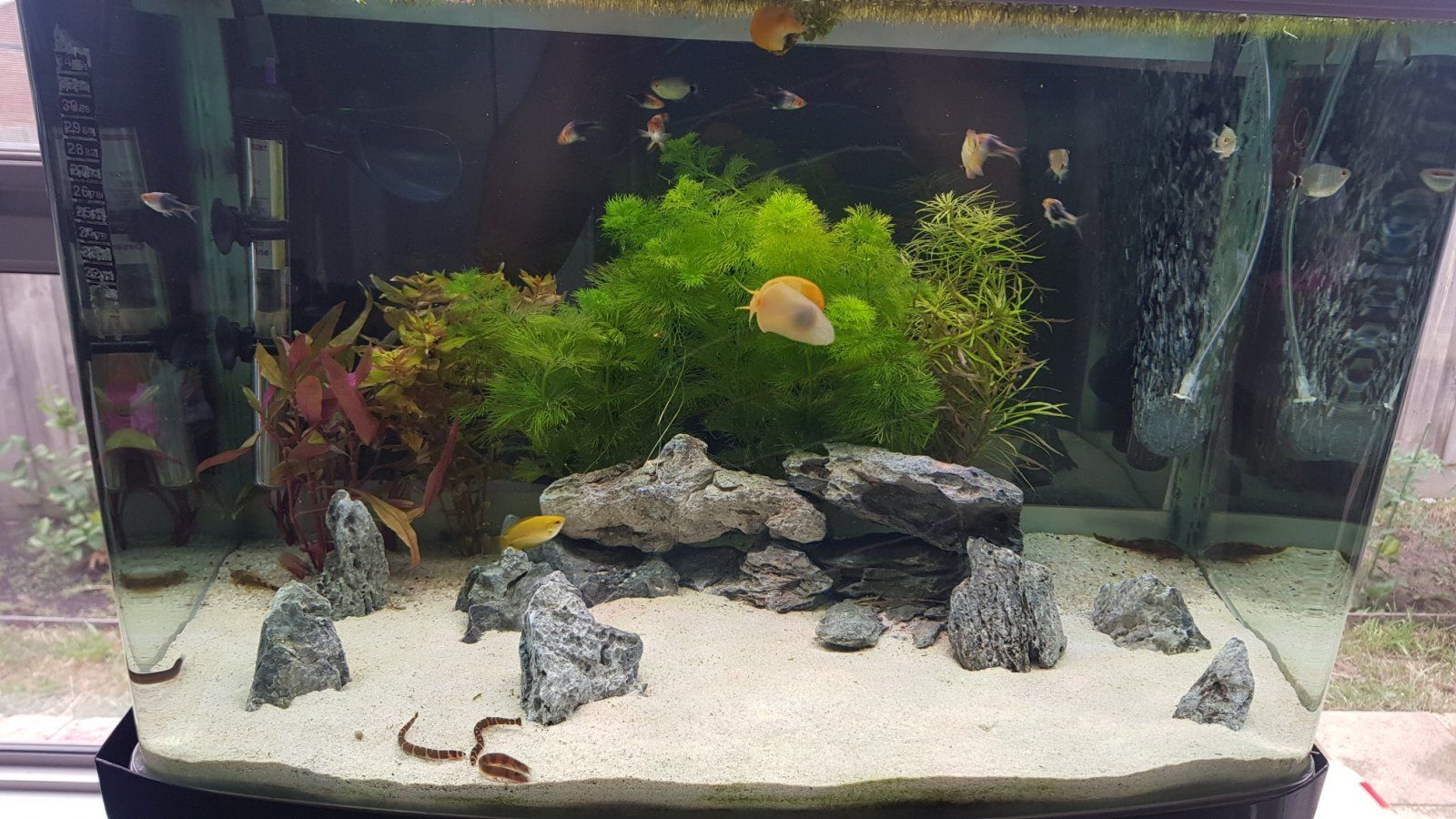 I'm going to be adding some more plants and Java moss as i want to get some shrimp and they're going to need lots of cover with the Ram lurking around!

Anyways if you have any feedback or advice on what plants i should get please feel free!

Wow.. look at all those free fish. You got your money’s worth from those two angels.

Fishmanic said:
Wow.. look at all those free fish. You got your money’s worth from those two angels.

Yeh they laid one more batch of eggs when i moved them back to the community tank but they ate them and then they divorced. Was good while it lasted!
OP
OP

Today i added some more Telanthera and some Blue Stricta just to fill out the tank a bit and give the fish some more cover. Also added a piece of driftwood that i attached some Java moss to! 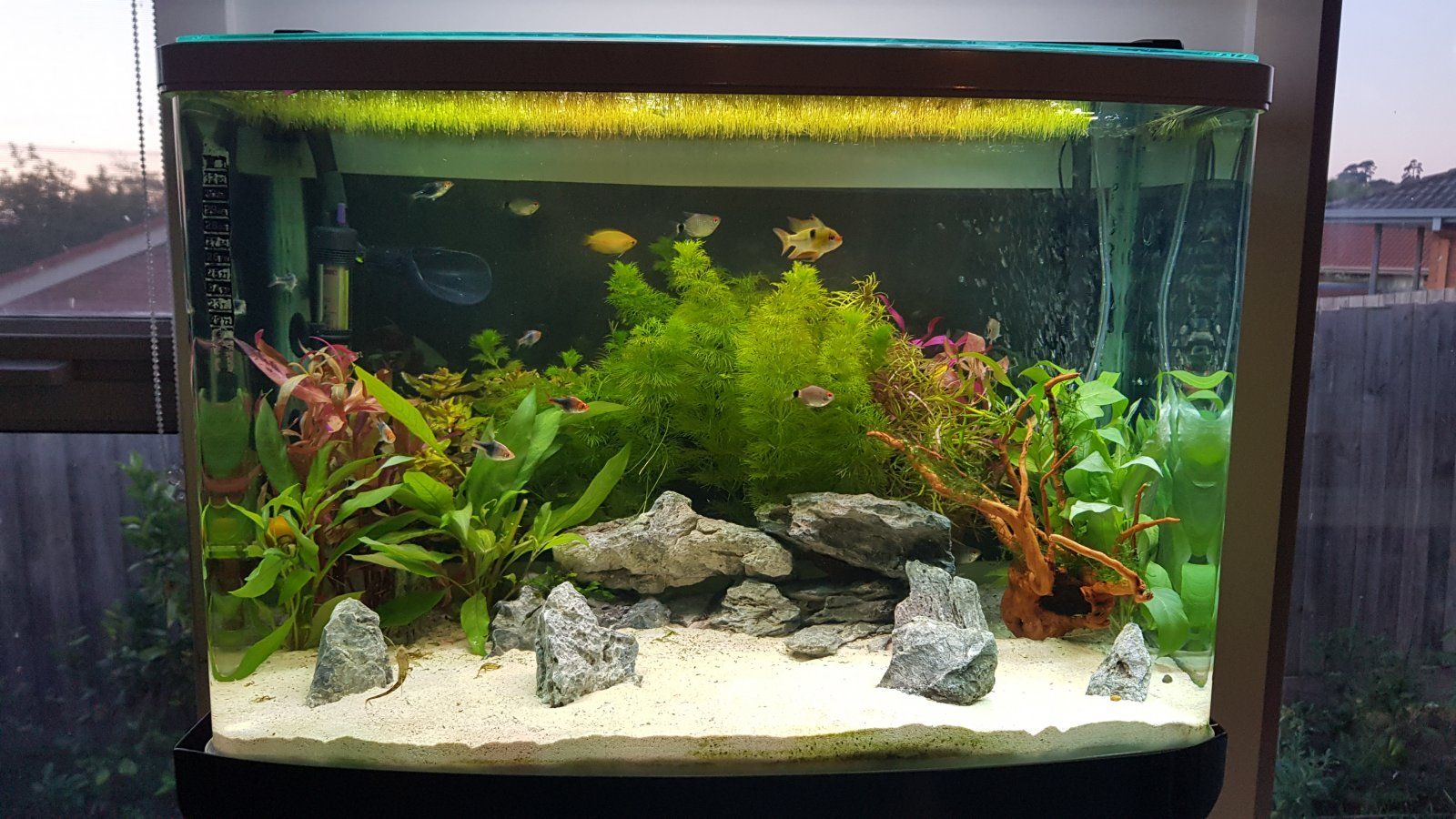 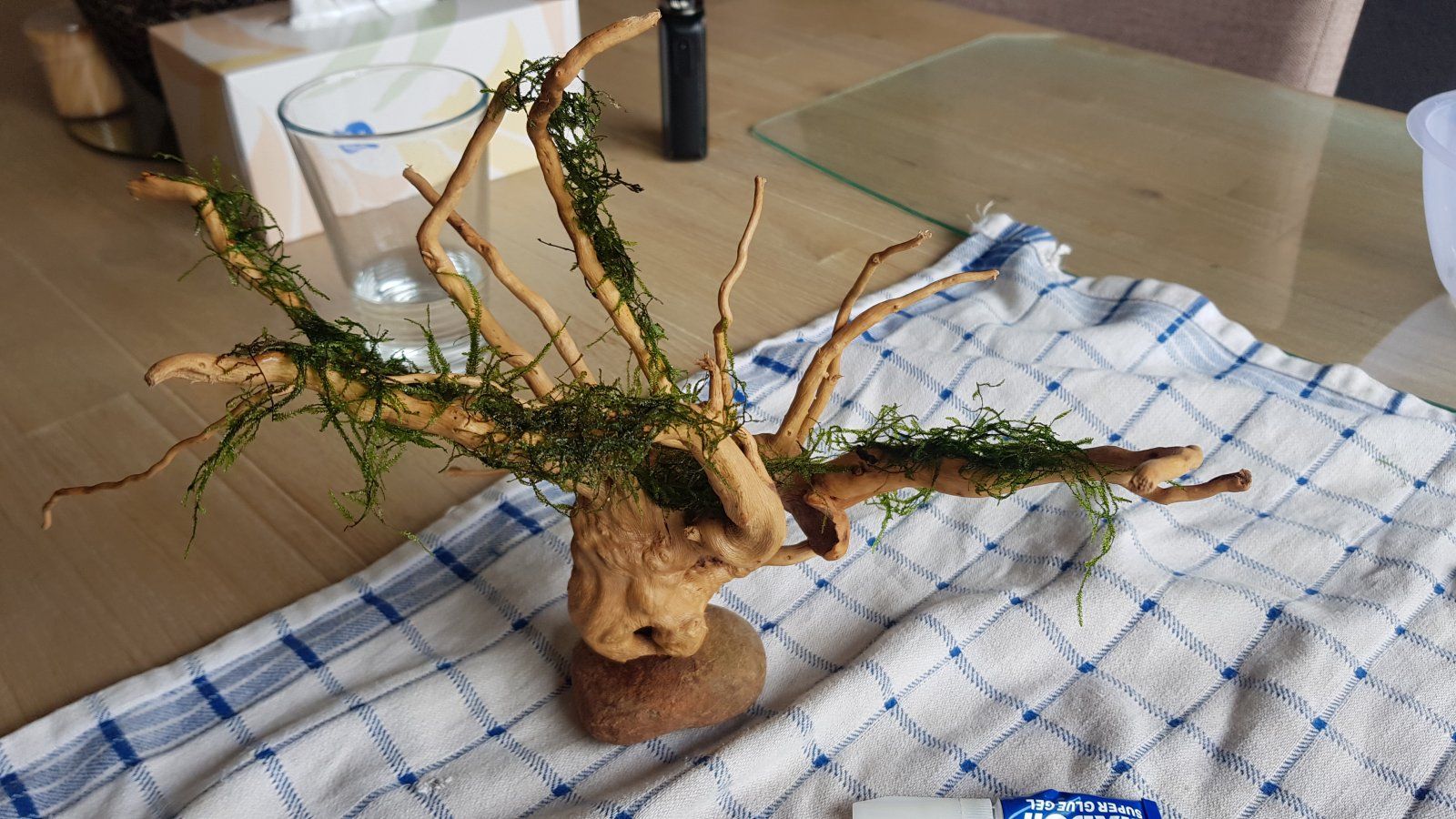 So if i added some shrimp what chance would they have to survive in there with my Blue Ram lurking about? :\
Last edited: Nov 26, 2020
OP
OP 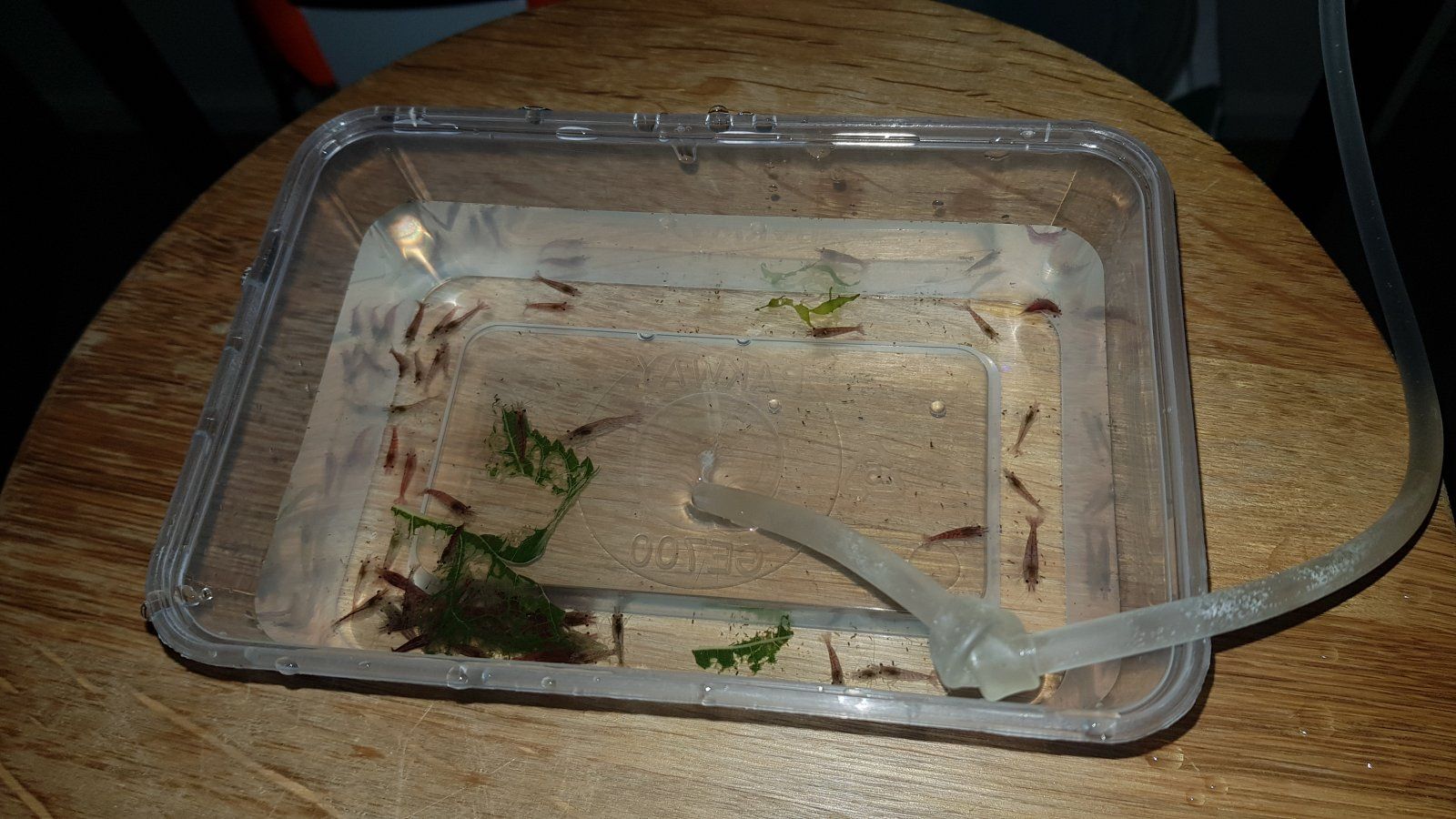 So i added the cherry red shrimp to my tank. Straight away my Ram came for a snoop and grabbed 2 shrimp, was thinking oh no it's going to be a massacre! But the funniest thing happened. One big fat red shrimp swam straight up to the Ram and faced off with him! It stared him face to face and then he backed off and swam away. It was the funniest thing! Now I've seen him face off with a few shrimp and he either backs down or has a nip at them and they dart off just in time. Lucky there's heaps of hiding places for them and they're all starting to settle in between the rocks and plants/moss. Fingers crossed they can establish a little colony in there and breed.
Last edited: Nov 28, 2020
OP
OP

Some of my plants have withered a bit on the left hand side of the tank, not sure if it's due to the frogbit blocking out light or something else. 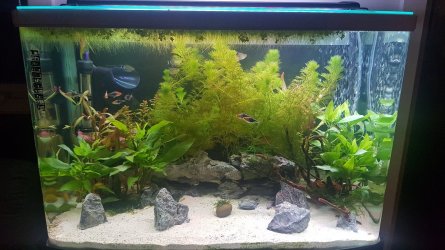 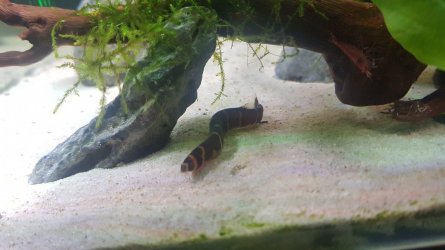 My mystery snails are getting nice and fat! 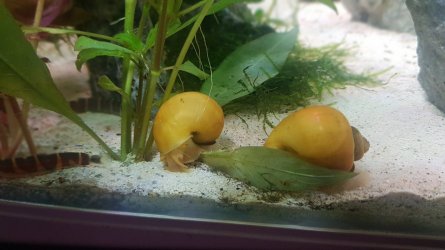 Cherry shrimp have survived so far! I think some are even pregnant! 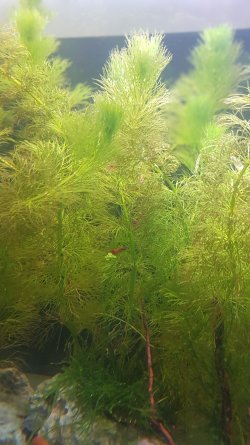 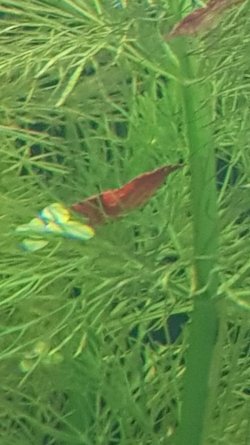 Twiggy the royal whiptail catfish chillin on a leaf 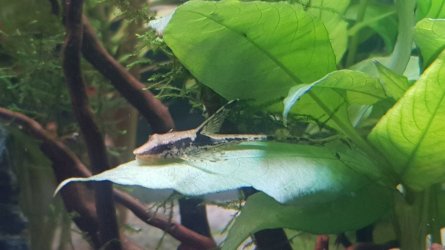 The boss of the tank 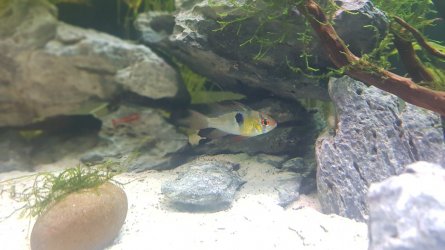 Really like the rockwork you did in this tank. Everything is beautiful!! Love the whiptail, and the ram, and the snails, and the cherries, and and and...
OP
OP

mcordelia said:
Really like the rockwork you did in this tank. Everything is beautiful!! Love the whiptail, and the ram, and the snails, and the cherries, and and and...
Click to expand...

Thank you! This is the first tank i've done where i actually tried to make it look natural and use lots of plants and rocks. Happy with how it came out. 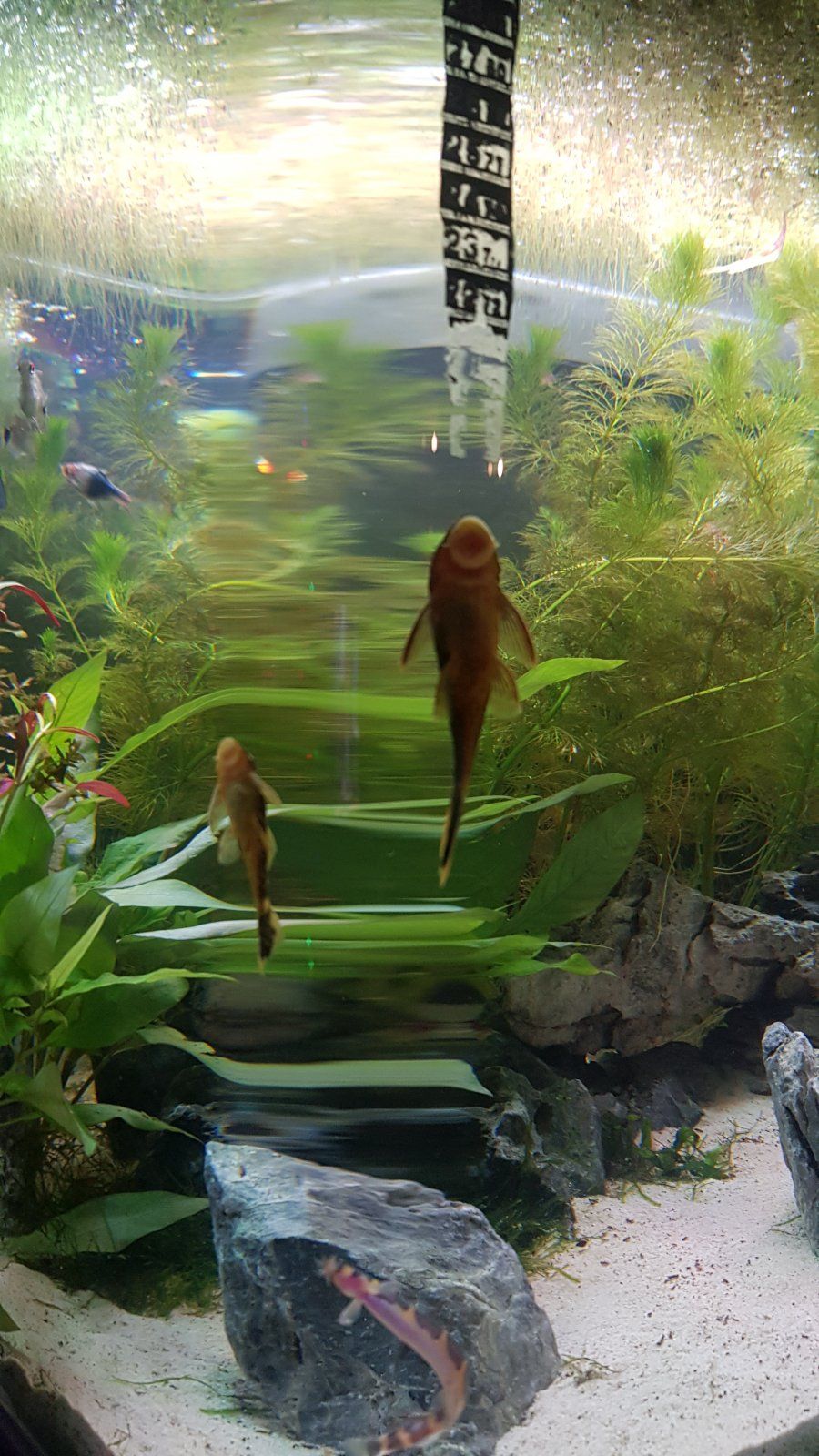 Mystery snail loves the view from the duckweed 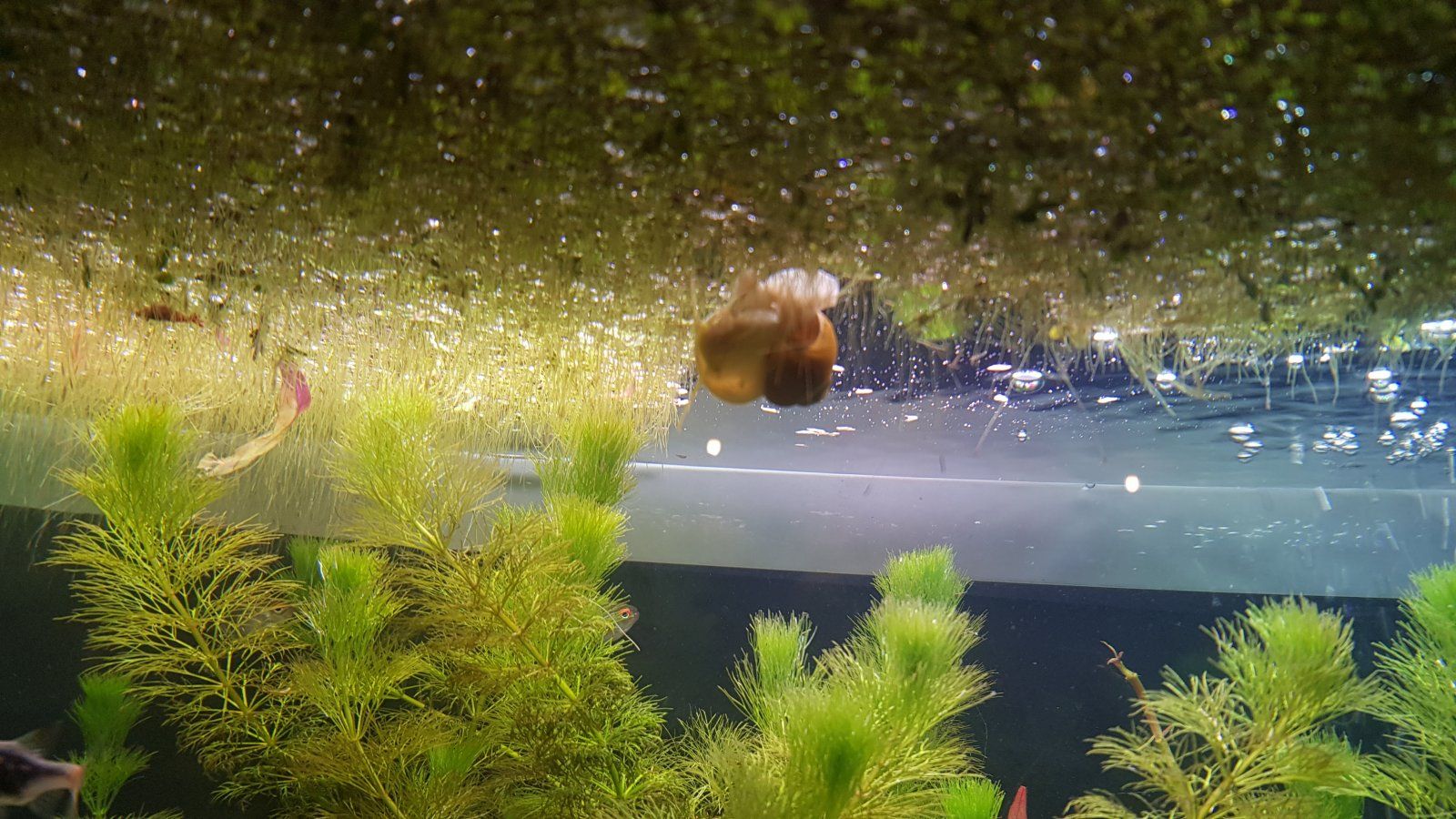 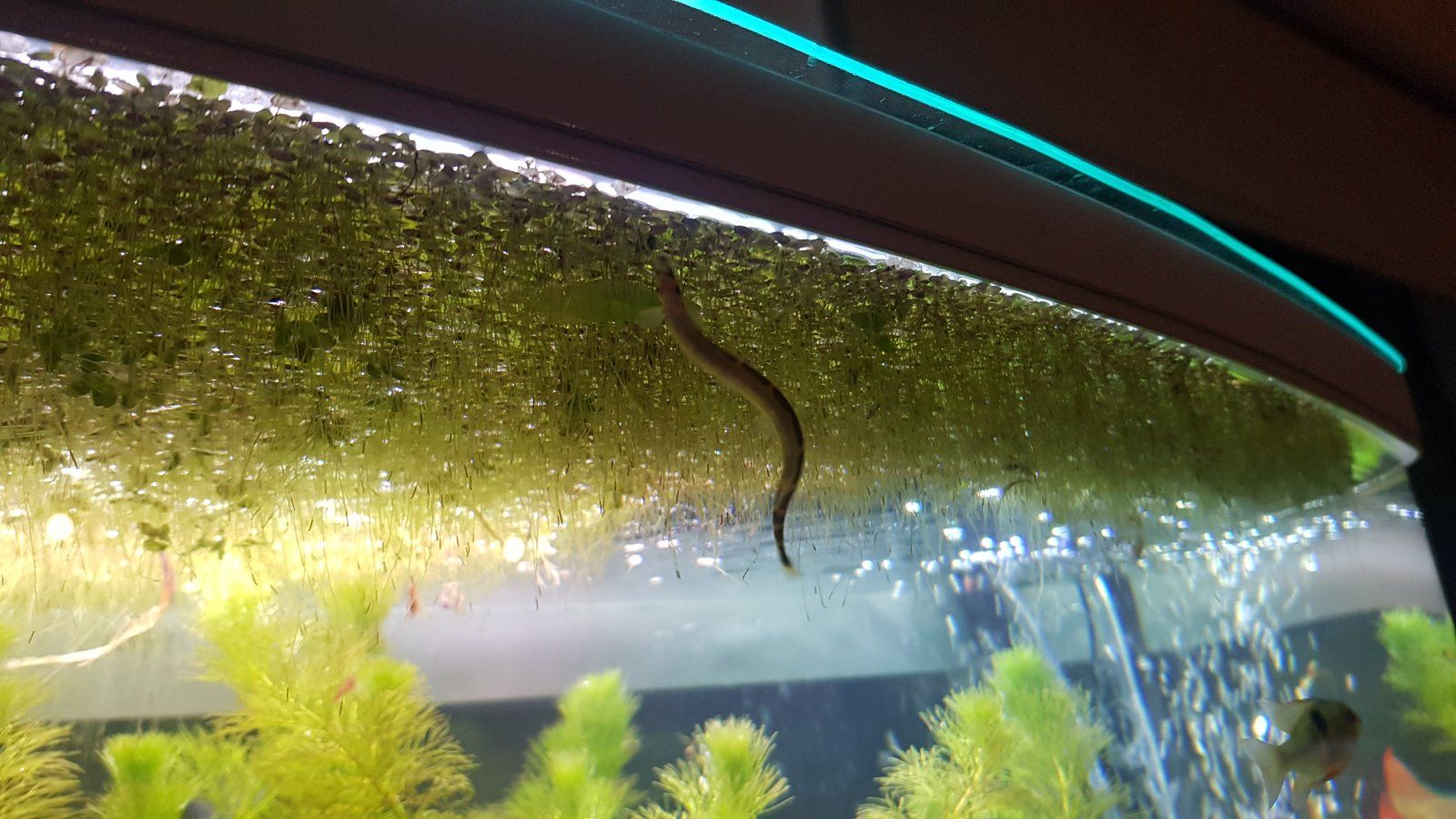 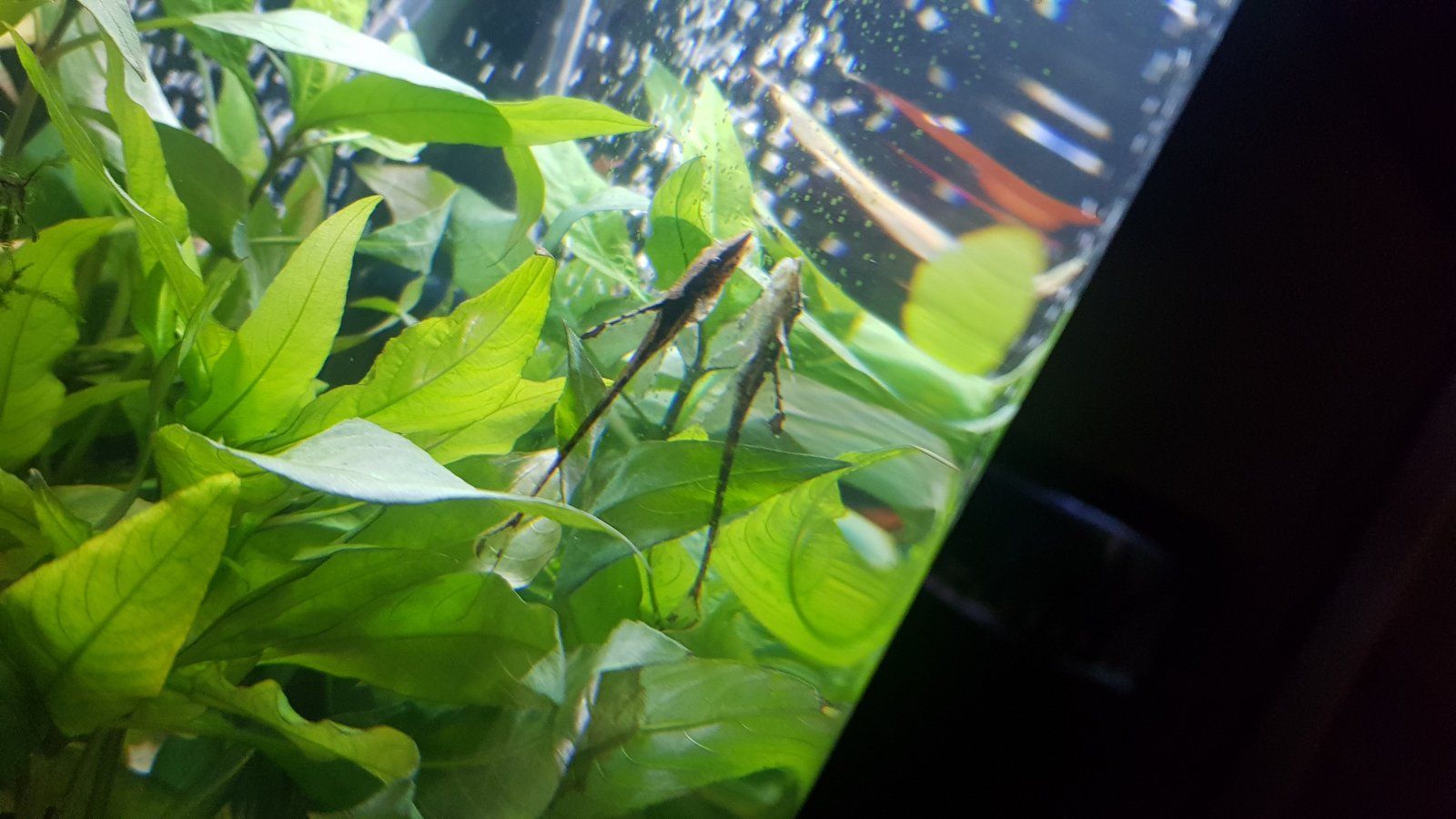 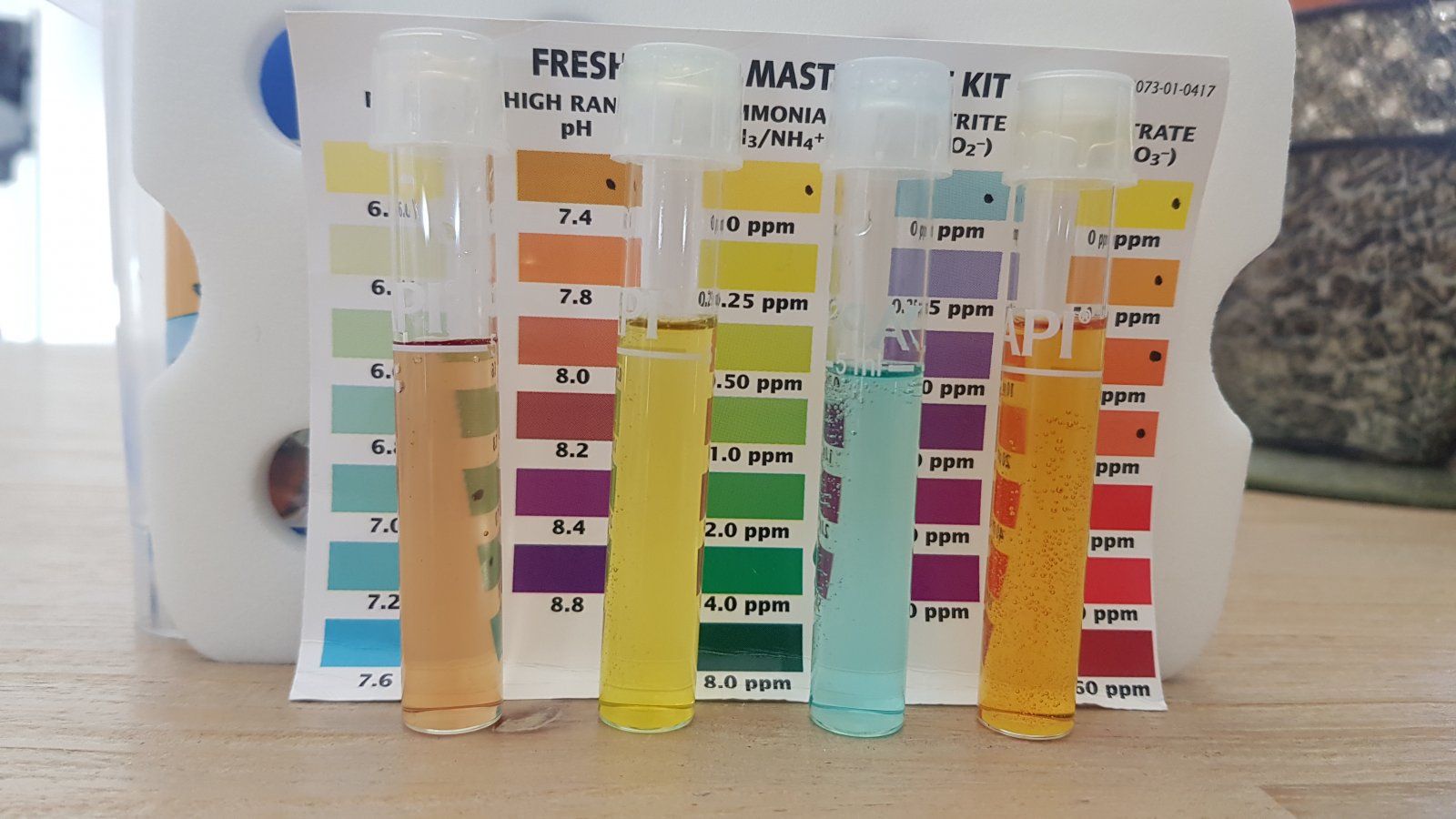 I wish I could make a tank like that! What plants are you using? How long do you have the light on for?
OP
OP

Fish4dawin said:
I wish I could make a tank like that! What plants are you using? How long do you have the light on for?
Click to expand...

There's some Telanthera, blue stricta, giant ambulia, java moss, duckweed and probably a couple of others I've forgotten the name of. Lights are on for about 13hrs a day.
You must log in or register to reply here.

Can you help identify Floating green spots from plants?