Care: Care is similar to that of members of the Central American Cichlasoma group of fishes, and a large tank with plenty of hiding places and robust tankmates is a basic. The fish does not do well in hard and alkaline water, a pH above 7.5 should be avoided, temperatures of 25 to 30 centigrade (77-86f) are preferred. The fish is aggressive to members of its own species and other pikes, but can be combined with other large, semi aggressive species. The fish is a predator and tankmates should be at least 4" to avoid becoming food.

Breeding: Difficult but possible, the hardest part is finding a suitable pair without them killing each other. The species is a cave spawner and after a brief courtship the eggs are stuck to the ceiling of a cave. The fry hatch within 4-6 days and can be fed with newly born live bearer fry.

Comments: The fish is one of a large group of species of the saxatilis group (spangled pikes). All members of this group are predators and have many of the same needs and requirements.

here is my white spotted pike 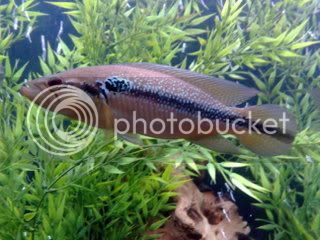