What kind of Gourami is this? 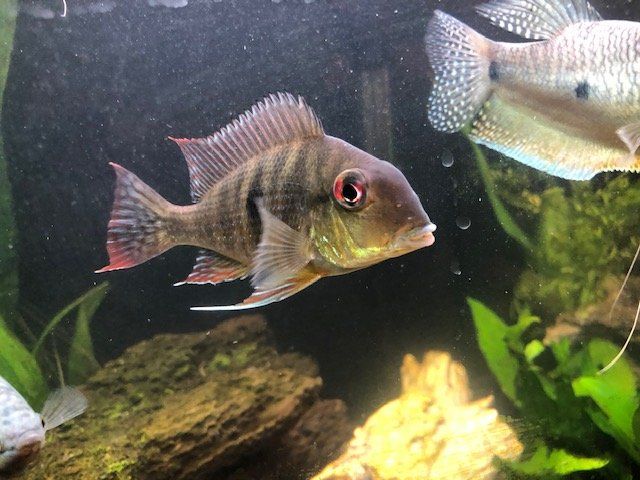 Got her about 8 months ago from a small local fish store that didn't have names on half the stuff. Anyway - the owner said it was a "Chocolate Gourami" - so I bought 2 took them home and one died immediately along with other fish he had.

This one about 2" when I got her and is now 5-6 inches. Semi aggressive - she is probably a he but his eyes are so pretty I keep referring to him as her. Not too many fish I get attached to but this is one of them.

Help please or could this be a creature he created himself? Definitely a Gourami. But I've never seen such big eyes on a Gourami - of course I call her "pretty eyes" - how original. She's in a tank with only large semi aggressive Gourami's and she was the leader until an 8 inch Gourami (that was only supposed to be 5 inches) came on the scene. My 29 gallon tank can only handle 5-6 of these guys or the water gets cloudy within a day. They eat enourmous quantities of food. Pellets whole, each one an entire tubifex worm dried block all to itself. So whatever goes in has to come out.

That is a cichlid, not a gourami.

Is it a geophagus ? (eartheater?)

Sent from my SM-G965F using Tapatalk

Dang ! @Byron beat me to it. That is definitely a cichlid and I'm fairly sure it is some type of Geophagus. It's a nice fish. Maybe G. surinamensis.

I tend to leave cichlid ID to others as my experience with the neotropical species is extremely limited.
OP

OMG it's a Cichlid -I thought she resembled some of those with the big eyes but he specifically told me it was a chocolate Gourami because I told him I was only looking for Gourami's. Then I get all his fish home and half of them die. I had friends that raved about this fishkeeper- I had just remembered years ago going into his pet store and seeing parrots being kept in filthy condition. So he was a hustler - preying on a newbie. This is the same guy that had phiranah's out in the open Well as it turned out I really like her, yes she is aggressive but not quite as aggressive as one of my very large 3 spotted Gourami's that arrived 3 inches longer than he's supposed to be. I don't know if he was captive bred but sometimes I do wonder.. Thanks for clearing that up!
OP

You know she even has a big dot on her sides just like the larger gourami's do. I just noticed the difference in the eyes and mouth. Well I'd get her a chiclid companion but the last thing I need is more large fish in that tank. She does separate herself away from the other fish - now I know why. I've NEVER wanted to own one - I just don't like to see the least bit of aggression in fish. But she's an exception - lots of intelligence behind those big eyes.

The "aggressiveness" you are seeing now is almost guaranteed to worsen to the point of dying fish, depending upon the species. And 3-spot gourami are the most aggressive of the small/medium sized gourami species, so this does not bode very well.
OP

That's why I removed all the fish rated "Peaceful". I was actually on the fence about her because while she was aggressive it was always just a mild bump and she'd hide in one of the caves - she won't even eat with the others because that's when most aggression occurs. So all of them BUT her love tubeiflex worms. So I soak two of them so they are nice and squishy and at mealtime I hold them at each end of the tank - it allows about 2-3 Gourami's (including my 3 spotted) to feed at once - they totally don't fight each other they are so anxious to get the worms. One by one they get full and drop off to go see what other goodies are left. Unless they eat really fast that gets us through the worst part of the day - feeding time. If we can get through that then I have it made because there isn't any nipping the rest of the time. One of the 3 spot's is 8 inches long - longer that he's supposed to be - and he constantly attacks everybody during feeding time unless I am feeding him some of these worms. Problem solved I hope. They all LOVE to see me and everyone of them let me touch them, pick them up and, of course feed them - so I guess I'm the dominant fish in this house.

Wow ! That guy in that shop is a real doofus. I don't think he's a crook. Real crooks get involved in more heinous things and prey on people in more sinister ways. More money in that. This guy is just a doofus. Buy him a good fish book and tell him to read it. Better yet, buy him out and do things right.
You must log in or register to reply here.
Share:
Facebook Reddit Pinterest Tumblr WhatsApp Email Link