Antennarius maculatus (Desjardins, 1840) is a member of the frogfish family (Family Antennariidae) which forms part of the order Lophiiformes. This order incorporates the deep sea angelerfishes, as well as the walking batfish (Family Ogcocephalidae).

The frogfish of Family Antennariidae are particularly well known for their highly developed first dorsal spine (illicium) which the fish "casts" like a fisherman casts a rod. On the end of the lilicum is an esca (or lure) which is used by the frogfish to attract prey. In the case of A. maculatus the lure is sometimes shaped like a small fish, complete with eyespot and vertical bars, but is more commonly numerous filaments connected to a common base: 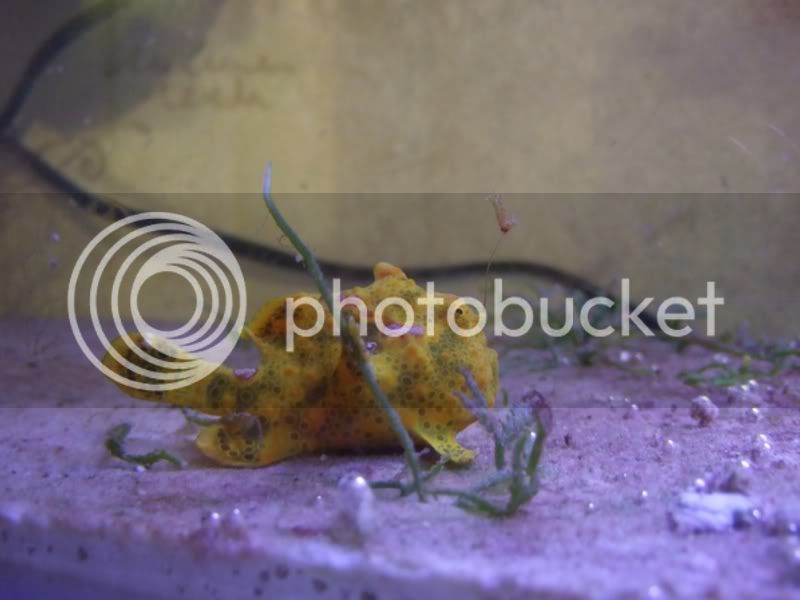 A. maculatus is a shallow-water species reported from depths of 1 to 15m, often occuring on coastal low profile reefs of macroalgae, sponges, soft coral and occasional large-polyped stony coral.

A. maculatus is placed into the Antennarius pictus species group by Pietsch & Grobecker in Frogfishes of the World, 1987. Features of this group are noted by Scott W. Michael (Reef Fishes Volume I; 2001, page 345):

This species group is comprised of five frogfishes, all but one of which are encountered in the aquarium trade. Members of this species group have an illicium that is usually twice the length of the second dorsal spine (this may not be the case in juvenile specimens); a second dorsal spine that is attached to the head by a membrane; 10 or 11 pectoral rays that are never bifurcate; frequent dark circular spots on the head, body and fins; and (often) three spots - spaced in the form of a triangle - on the caudal fin.
Click to expand...

A 20 gallon tank will be required for this fish which is noted in Reef Fishes Volume 1 as having a maximum size of 10cm (3.9"). The size is to ensure that waste does not become an issue for the fish more than room to actually move around.

Normal reef conditions of temperature, salinity and pH will do fine, though frogfish are reported to perform poorly in very high flow rates, such as can be expected in SPS tanks. Frogfish also seem to be somewhat susceptible to stings from nematocysts, so keeping them with anemones may be less than wise.

As with all frogfish, A. maculatus has the ability to consume prey as large as the fish. Slender fish much longer than the fish can be consumed as well. As a result of this tank mates should be chosen with extreme care, even the venomous spines of scorpionfish (Family Scorpaenidae) are no deterrent to frogfish.

Due to the above, any tank mates should be in the region of twice the length of the frogfish, though this then raises the spectre of the tank mate eating the frogfish. In addition, many fish will attempt to pick at the dermal flaps and appendages used by the frogfish for camouflage.

All of the above makes any frogfish an ideal candidate for a species tanks. It is possible to keep frogfish together, though one must weigh up the risk of cannibalism. A. maculatus is one of the less voracious frogfish when it comes to cannibalism (Histrio histrio has been found with 13 conspecifics in its stomach) and as such makes a better choice for a potential frogfish community.

I have found that frogfish do not fare well in a newly set up tank. If possible set up the tank and run it with a live feeder (be it a fish or invertebrate) for some time to make sure the biological filtration is stable. I would highly recommend a skimmer as well as regular water changes, especially on smaller tanks.

The diet of a frogfish is a mixture of fish and motile invertebrates. Some have suggested that the shape of the lure indicates the style of food preferred, but I am unaware of anything to support this and most frogfish have a variety of foods within their stomachs.

Getting a frogfish to take frozen food is one of the largest challenges. One will often have to offer food on a feeding stick and wiggle it to and fro in an attempt to get the frogfish to take the food. I have had success with A. striatus and Lophiocharon trisignatus taking dead food from early on, but am yet to truly have success on getting A. maculatus to take dead.

Freshwater feeder fish such as goldfish, guppies (and even brackish feeders such as mollies) should be avoided where possible as the make up of freshwater fish is believed to lead to fatty deposits in the liver.

Spawning has been accomplished with a number of frogfish species though there is no detailed description for A. maculatus. Raising of the fry is considered extremely difficult due to the eggs hatching into a planktonic larval stage requiring tiny live foods such as phytoplankton and rotifers.

In my experience this is a great fish to add to a small SW tank that will spend much of its time sitting in view. I have found it lures less than A. striatus and is certainly less impressive when it comes to eating, but it does tend to come in a larger variety of colours; witness below the transformation one of my specimens undertook this year: 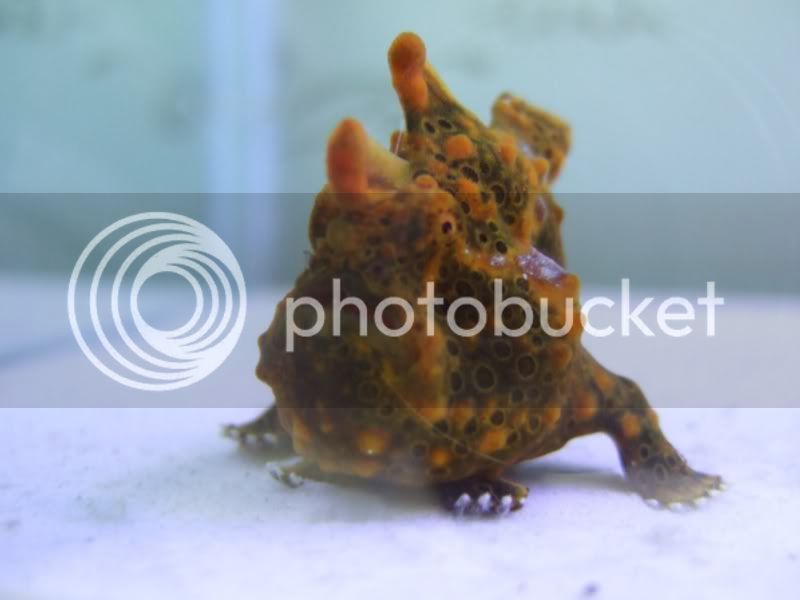 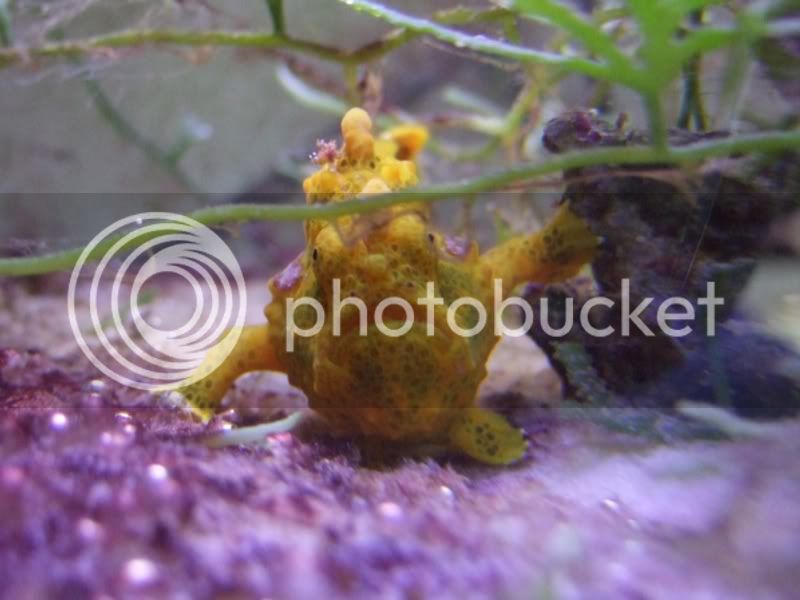 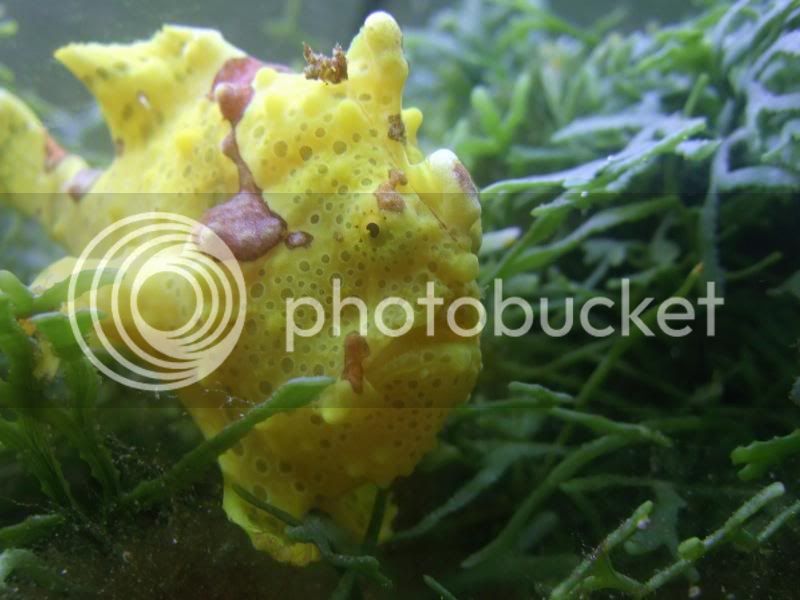