VOTE NOW!...Fishforums April 2020 Fish of the Month contest (livebearers only)

PLEASE VOTE!
We have 10 beautiful livebearer fish entered into the April 2020 Fish of the Month Contest. View all the entries and descriptions below and then go to the top of page--click on your choice for FOTM and then click the "cast" button.

Please DO NOT post any comments about any specific entry in this thread...such posts will promptly be deleted. Preferably no posts should be made in this voting topic.

The winner is awarded a neat banner in his profile area and will be featured in a "fotm winner" thread for all to see and to comment.

Good luck to our entrants in the Fish of the Month contest. We at fishforums.net thank you for your participation.
Last edited: Jun 10, 2020 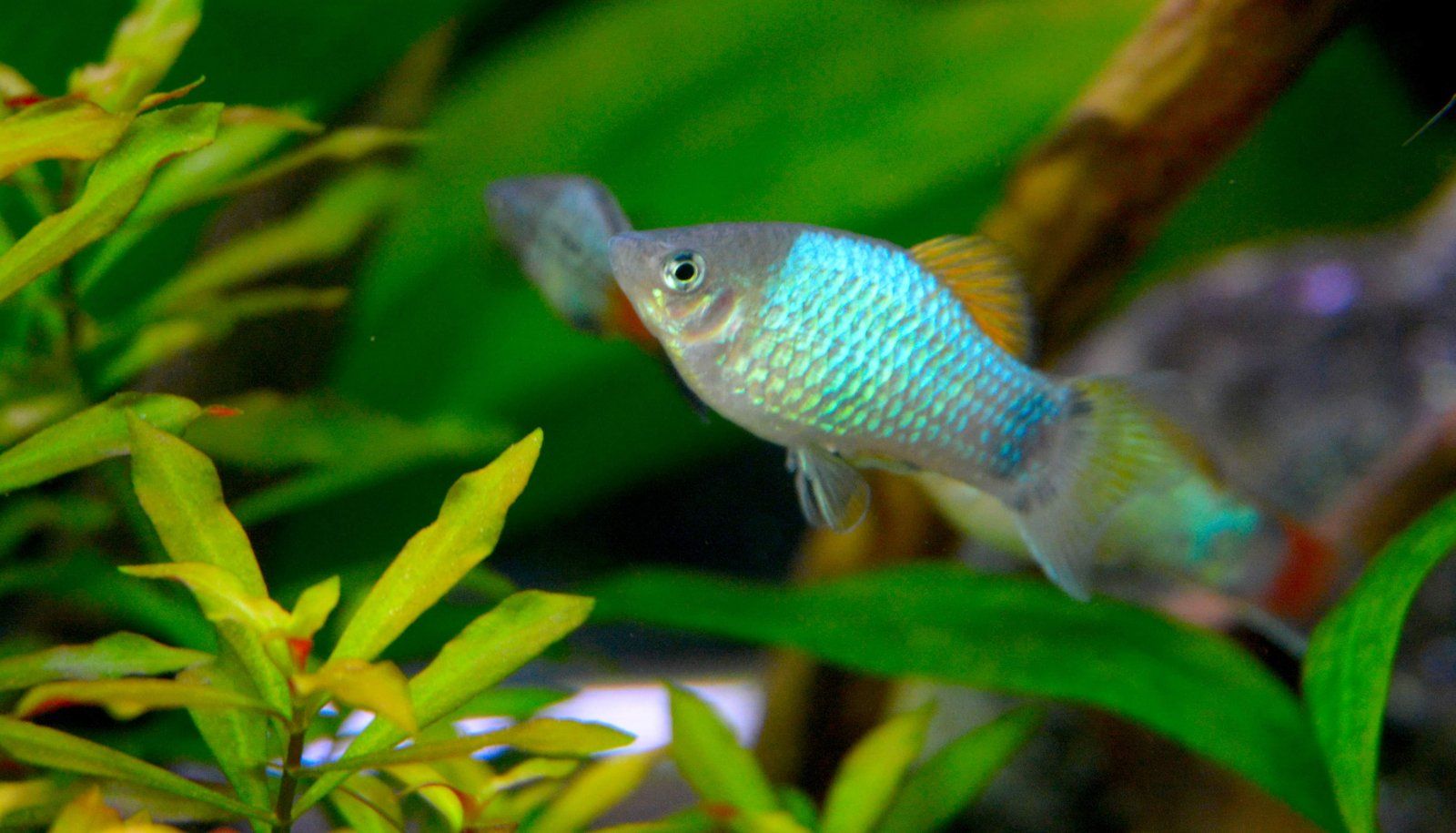 This is Crafty, my 10 month old blue mickey mouse platy boy. He was born in our tank. When i scooped out all the tiny day old fry to transfer them to another tank, he evaded the net several times. I tried 10 times to catch him but he was so sneaky and crafty... hence his name! He has stayed in the tank and now is a permanent resident in the tank he is in. I kept him, a brother, and his sister from the same brood. The 15 other siblings were given new homes.
He shares the tank with two other male platies plus an assortment of other fish. Tank is a 46 gallon bowfront.
He spends most his time chasing around his brother and ignoring the 3rd unrelated male who tries hard to get his attention.
Last edited by a moderator: Apr 15, 2020 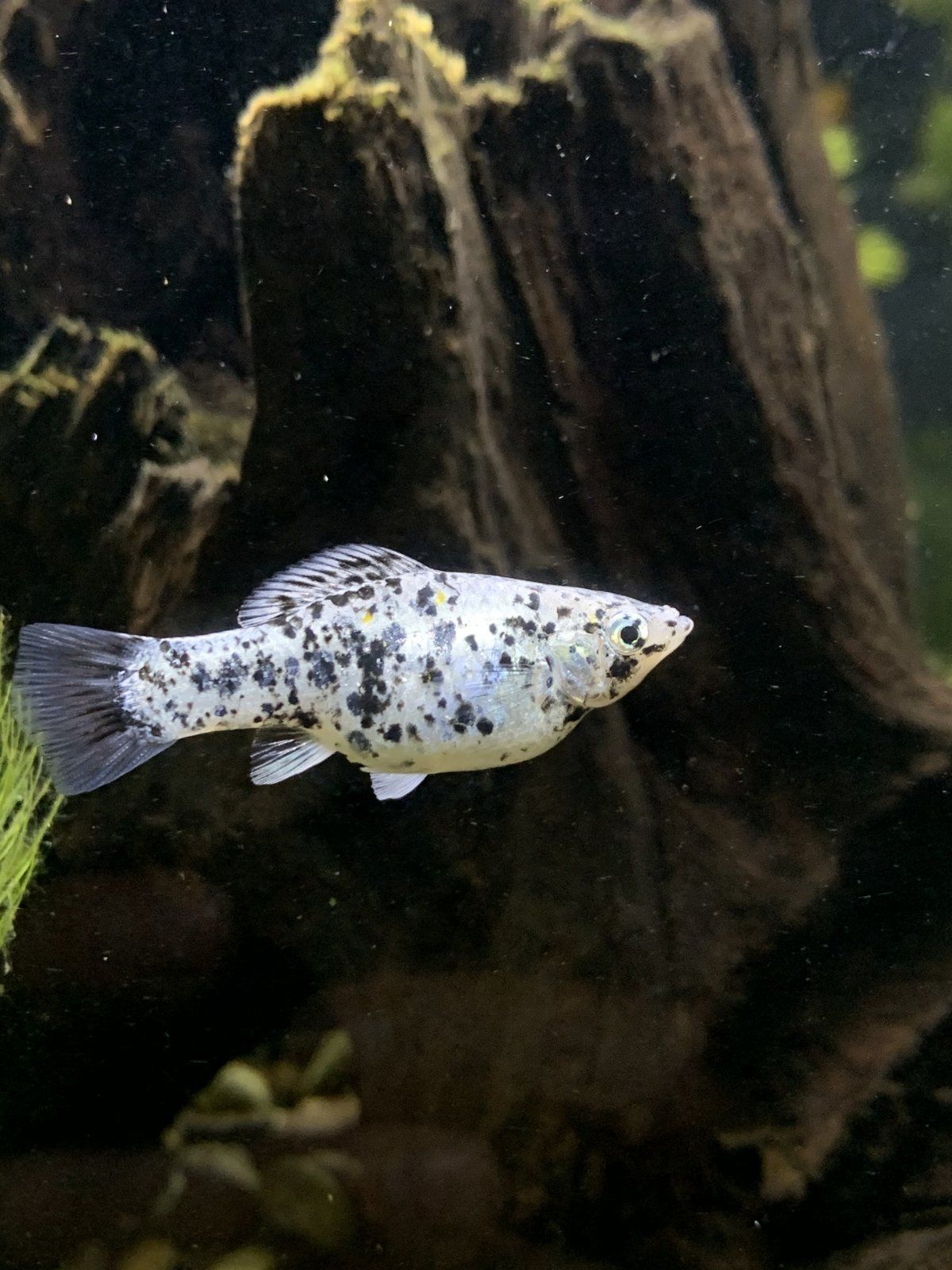 .
Ok figured I need to enter this girl!

Dalmatian molly, age not exact sure. I’ve had her a month. She lives in a 20 gallon with two other mollies and two angel fish. A snail and a Pleco.

her unique traits ..... hmmmmmm tricking us that she wants to drop babies. Haha

wouldn’t feel right not adding her to the fish of the month , since she’s been the talk around here for a little bit
Last edited by a moderator: Apr 15, 2020
S

This is my Red-eye Koi Male Swordtail.
I got him about two weeks ago, age unknown.
5 other swordtails living with him (all females).
Tank size of about 30 to 50 gallons.
I named him Johnny because that name just randomly pierced into my head
at the time I decided to name him.
I fed him pellets (is that what you call) mostly. Thinking of switching to live food.
He's okay. Sometimes quite aggressive but not most.

Sorry if it is quite a blurry photograph; I took it with an iPhone.
Hope I win!
Last edited by a moderator: Apr 15, 2020 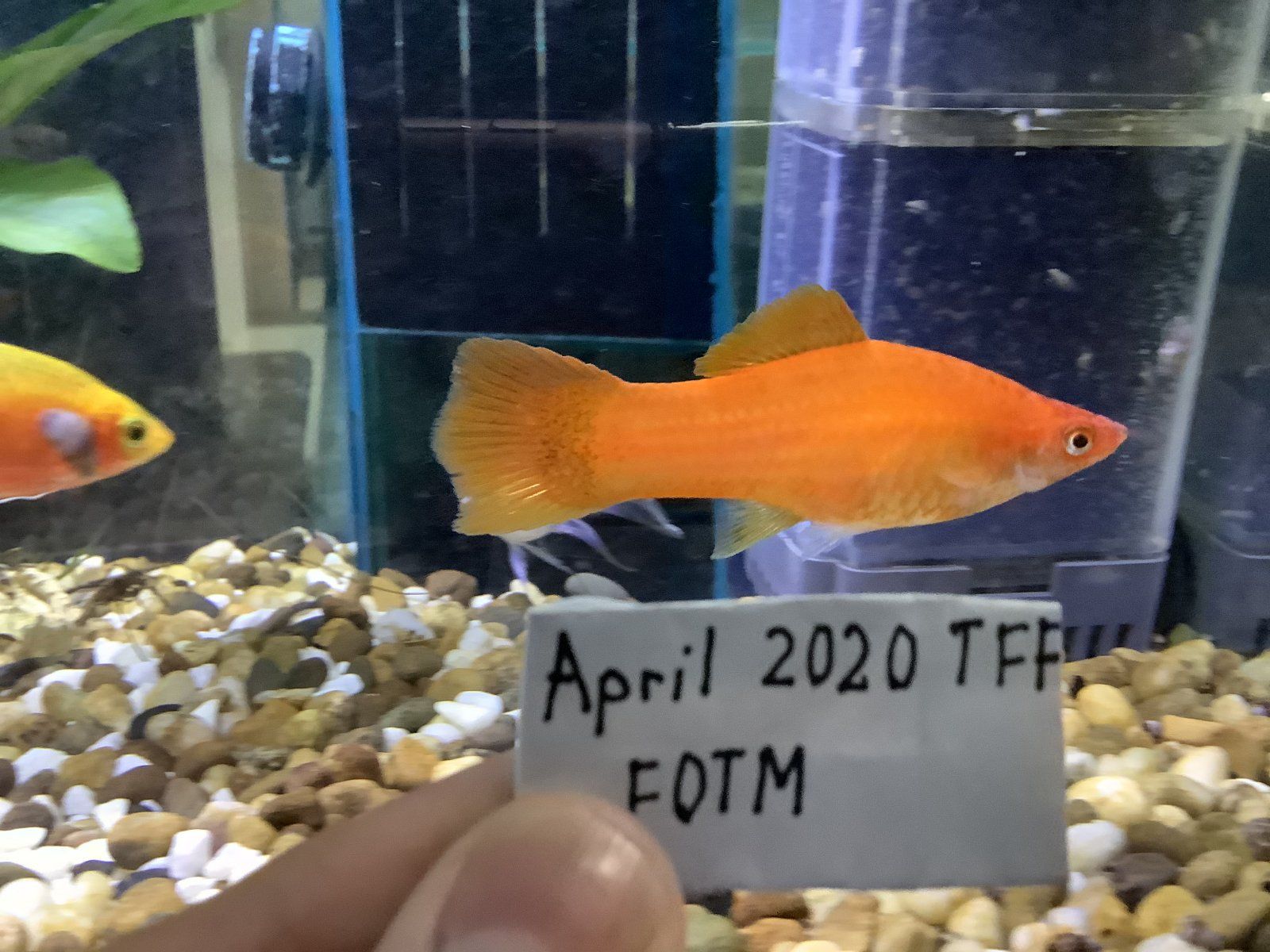 This is my swordtail, just got her today I have to begged my friend to give her for FOTM , she is 4 inches long, live for 3 years in my friends koi pond. Thanks for reading.
Last edited by a moderator: Apr 14, 2020 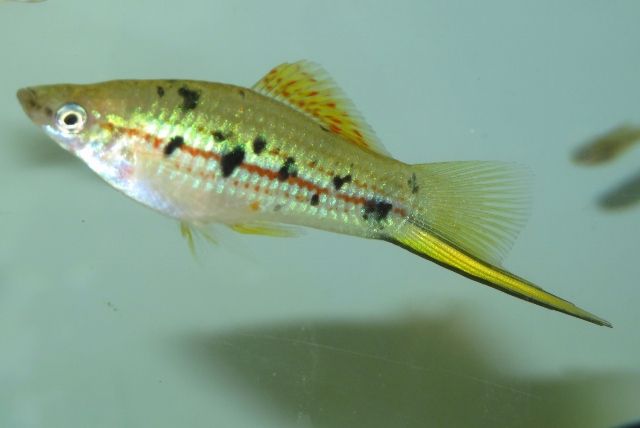 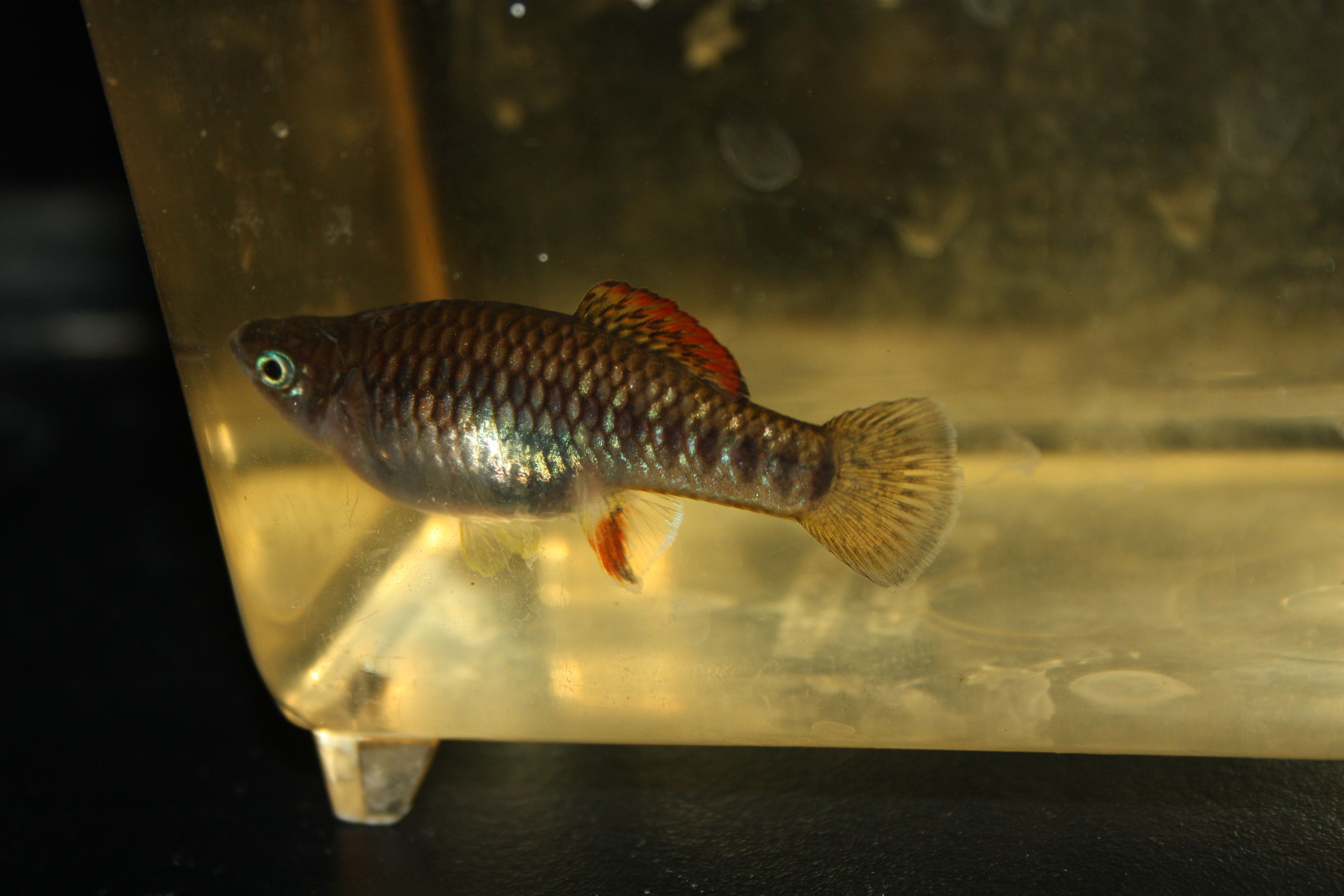 And the next one is with the note

My entry will be a female Brachyrhaphis roseni also known as Cardinal brachy. I chose a female, for she´s bigger than a male and more impressive.
This is a livebearer which occurs in Costa Rica and Panama. Not really suitable for a community tank with peaceful fish. They can be aggressive. But it´s a wild livebearer that can be considered rare in the average fishtank. And for sure not so easy to find at an average lfs.
This species is not that demanding when it comes to the water parameters. So, that´s a plus. Best kept between 20°C-28°C. They´re omnivores. With their vivid behavior, they´re not meant for a novice aquarist.
They've got a bronze colored body. The top of the dorsal is red colored and so are the first finrays of the anal fin. Which looks like a hook if you're watching it from a distance. They reach up to 4-8 cm in size. Most will max to 6 cm (mainly females, males are smaller)
A very beautiful wild livebearer...
They're in a 64 liter tank. It's a small group swimming in there. I got them as very young specimens and had to wait till the genders were clear.
Last edited by a moderator: Apr 15, 2020

Passionate about fish and their care 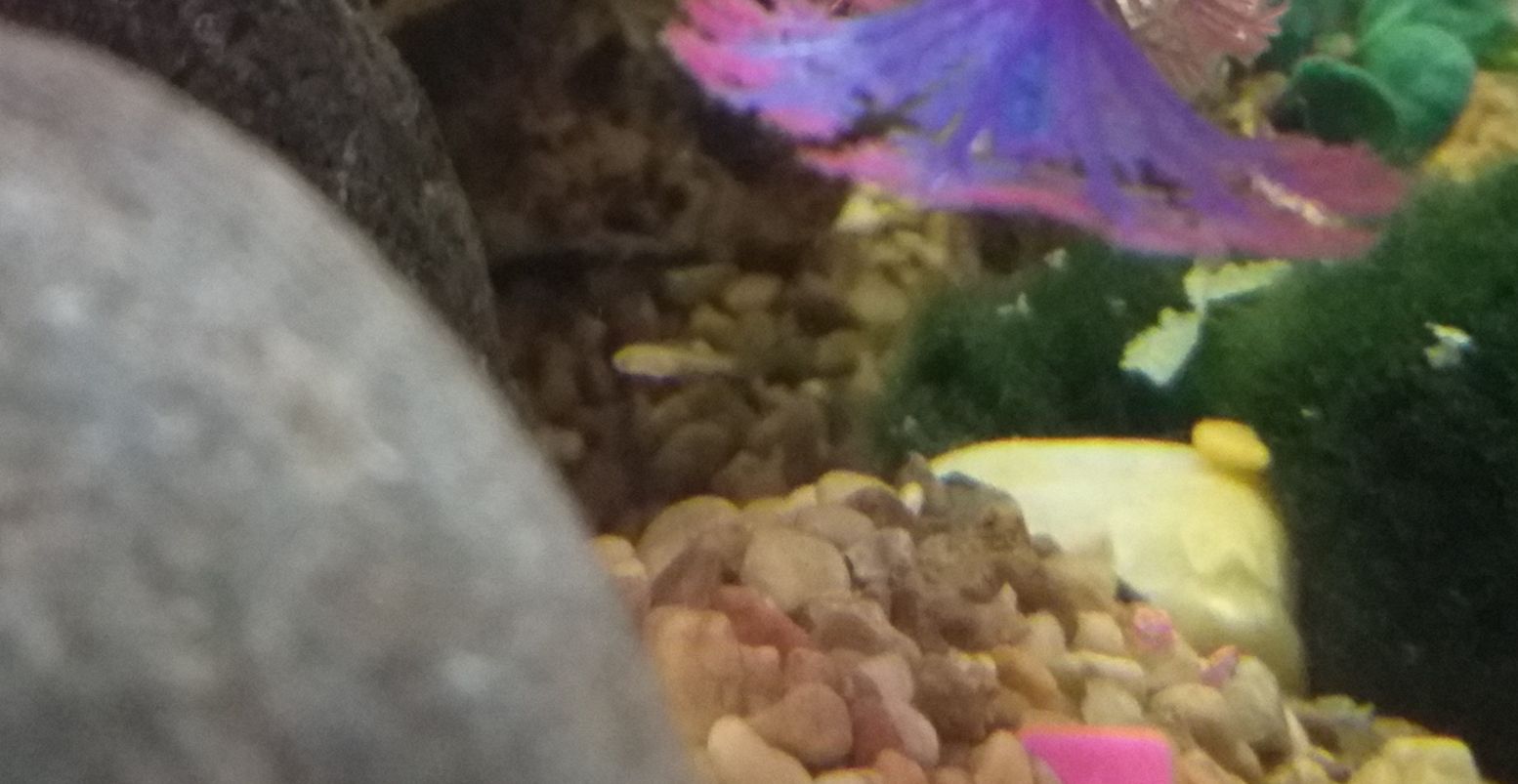 This is frankie he/she was born about 30 minutes ago. Lives in a ten gallon tank with its siblings and an older batch of fry.
Its mother was a blue tailed face guppy and its father was a blue and yellow leopard guppy
Last edited: Apr 14, 2020 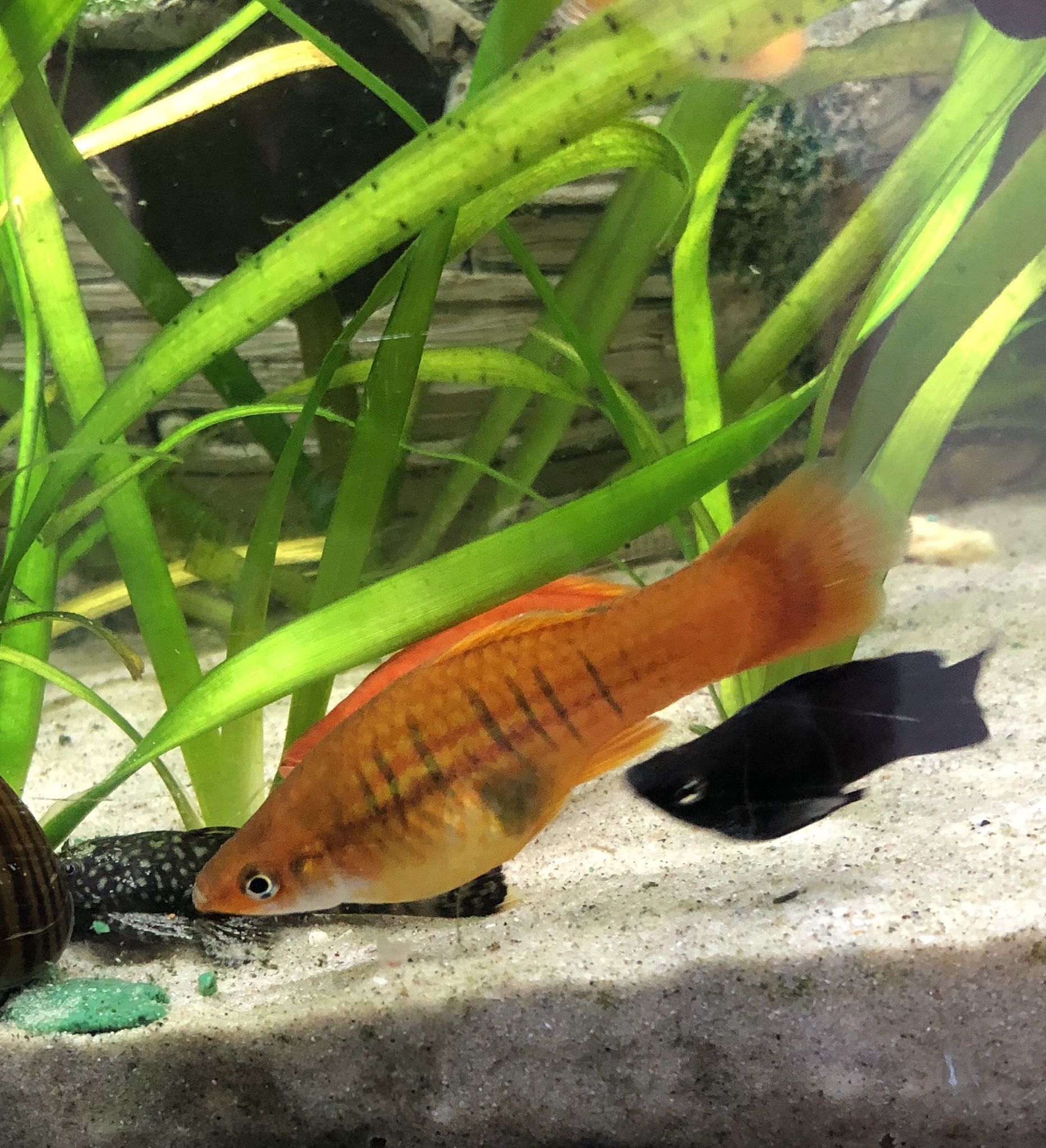 Hi all, this is my beautiful tiger striped swordtail girl (aka my mini freshwater whale).I’ve had her for probably over a year now. She’s is very much a Mumma’s girl feeds out of my hand daily.
She eats a range of foods from bloodworms, brine shrimp, flakes and algae waffles.
Tank mates: Rosy barbs, Bristlenose, Corys, swordtails, guppies, pacific blue eyes, Chinese algae eaters, a flying fox, mollies, gudgeons and MS.
Housing is a heavy planted 78G/264L tank

Wow she is up against some beautiful entries, good luck everyone!
Last edited by a moderator: Apr 15, 2020 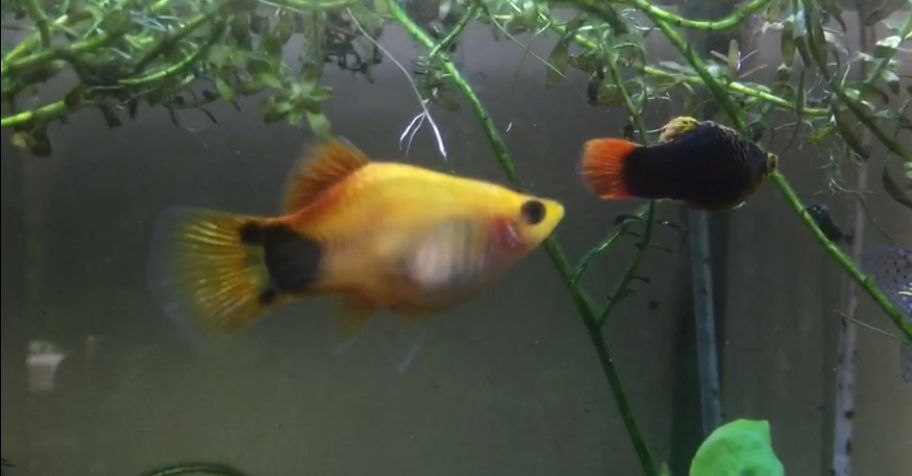 Here is my female Mickey Mouse Platy! Not the best quality photo, but it is still quite a beautiful and cute fish! The black platy next to it is a male! And he is always by her side! They have had several broods of fry before, some of them survived and I raised them! This platy was actually born in my tank, and grew up within the plants and hiding spots without my nurturing! She always comes up to the top of the aquarium to feast upon some tropical fish flakes! And she has such a great personality! I am not sure how old she is, but she is well over a year and a half! Probably 1.5 years old! Thank you for checking out these photos! I appreciate it a lot!
Last edited by a moderator: Apr 15, 2020 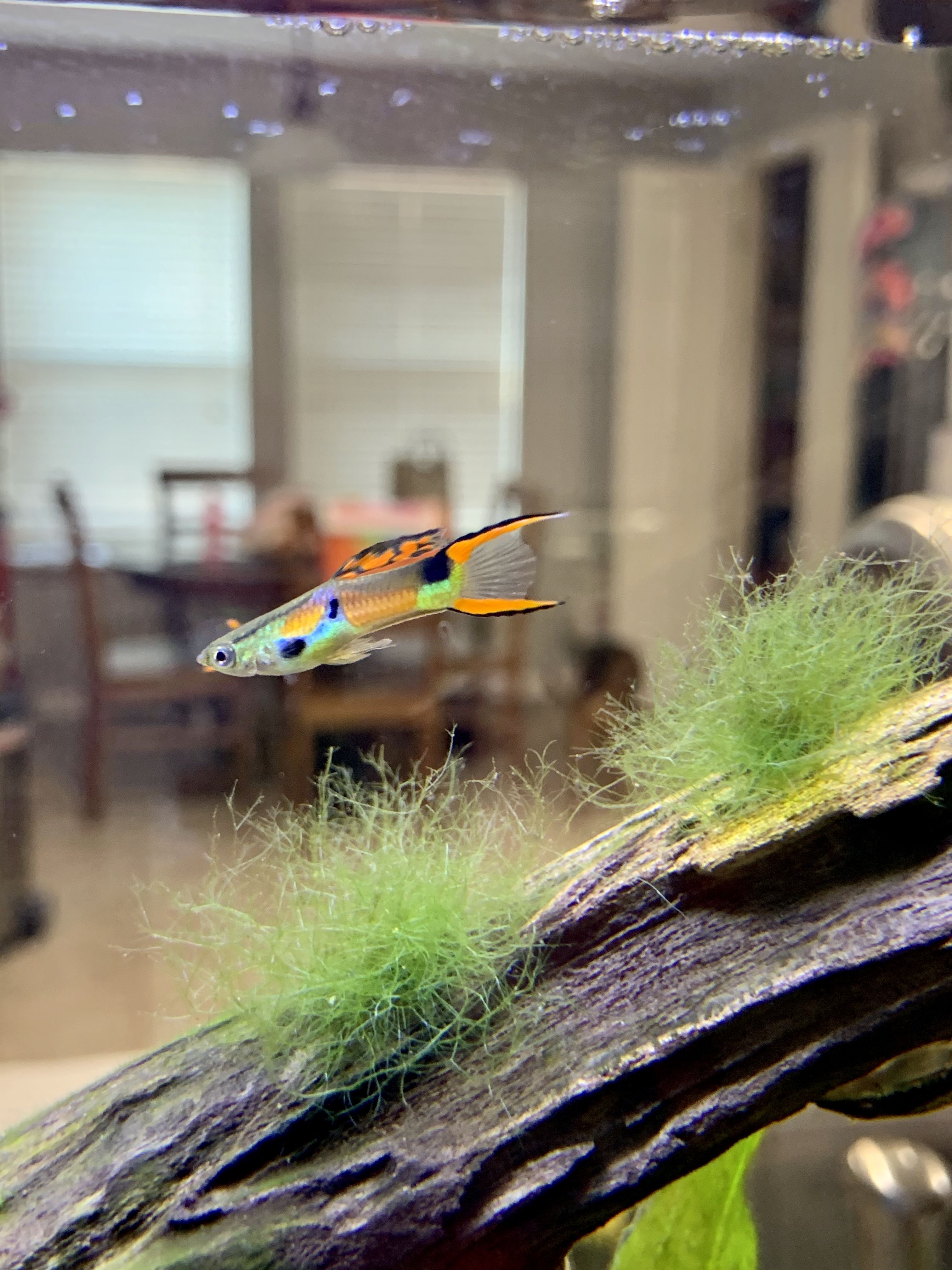 This is Blaze I’ve had him about 6 months now. He lives in a 5 gallon tank with 2 baby endlers that I call his brothers lol. Blaze is my favorite fish and has a Spunky personality! He eats flakes but loves snacking on algae wafers and shrimps pellets. He has made me fall in love with endlers and when I get a bigger tank I’ll definitely be filling it with more endlers!
Last edited by a moderator: Apr 15, 2020
OP
OP

End of Entries
Please slowly scroll up as you review the 10 entries and then cast your vote in the poll at the top of this thread.

We have the best competitions here at Tropical Fish Forums and with your continued participation they will keep growing.

On May 1st, we will start up our Tank of the Month contest. For May, we will feature tanks sized at 30 US gallons (114 litres) or LARGER. If you have a tank of that size range, I hope you will enter the May TOTM contest.
Last edited: Apr 15, 2020
OP
OP

Poll is now closed!. cmhassinger with his endler BLAZE has won. If you'd like to congratulate him, go to the WINNER thread here:
April 2020 Fish of the Month winner!
Last edited: Apr 25, 2020

Fresh blood for my existing colonies.