This Poll is Now Closed
Fish of the Month

​
PLEASE VOTE!
We have 5 awesome Plecos entered into August's 2021 Fish of the Month Contest. View all the entries and descriptions below and then go to the top of page - click on your choice for FOTM and then click the "cast" button.

Please DO NOT post any comments about any specific entry in this thread...such posts will promptly be deleted. Preferably no posts should be made in this voting topic. This is a public poll so source of votes are viewable. You are allowed to change your vote if you wish.

Good luck to our entrants in the Fish of the Month contest. We at fishforums.net thank you for your participation.
Last edited: Aug 31, 2021
A

Ok this is my flash pleco.

This is a flash pleco (L204). I picked him up for around $15 at petco about 18 months ago. Originally I put him in a 29 to grow a bit and it took about 3 months and a lot of zuccchini to get him to come out of hiding and trust me (or at least stop running away). After about 8 months I moved him to the 120. I *think* it is a male but they are difficult to sex. Since then I located 3 from a small dealer in wi; and 3 more for a larger shop on the west coast so I now have 7. They are slow growers; at least a bit slower than lemon blue-eye bn i own and the youngest still hasn't fully developed his/her tail after 11 months (probably 16 to 18 months since birth). I find them a bit more skittish than bn pleco but in the 120 two of the younger ones are rather bold. Anyway I highly recommend them but there is always a chance your fish will spend more time hiding than not. Recently the one pictured above has been spending more time at the back of the tank. In another year i might try to breed them though it is said to be a bit on the difficult side. Certainly not like bristlenose where all it takes a male and a female even if you would prefer they did not breed.
Last edited by a moderator: Aug 19, 2021 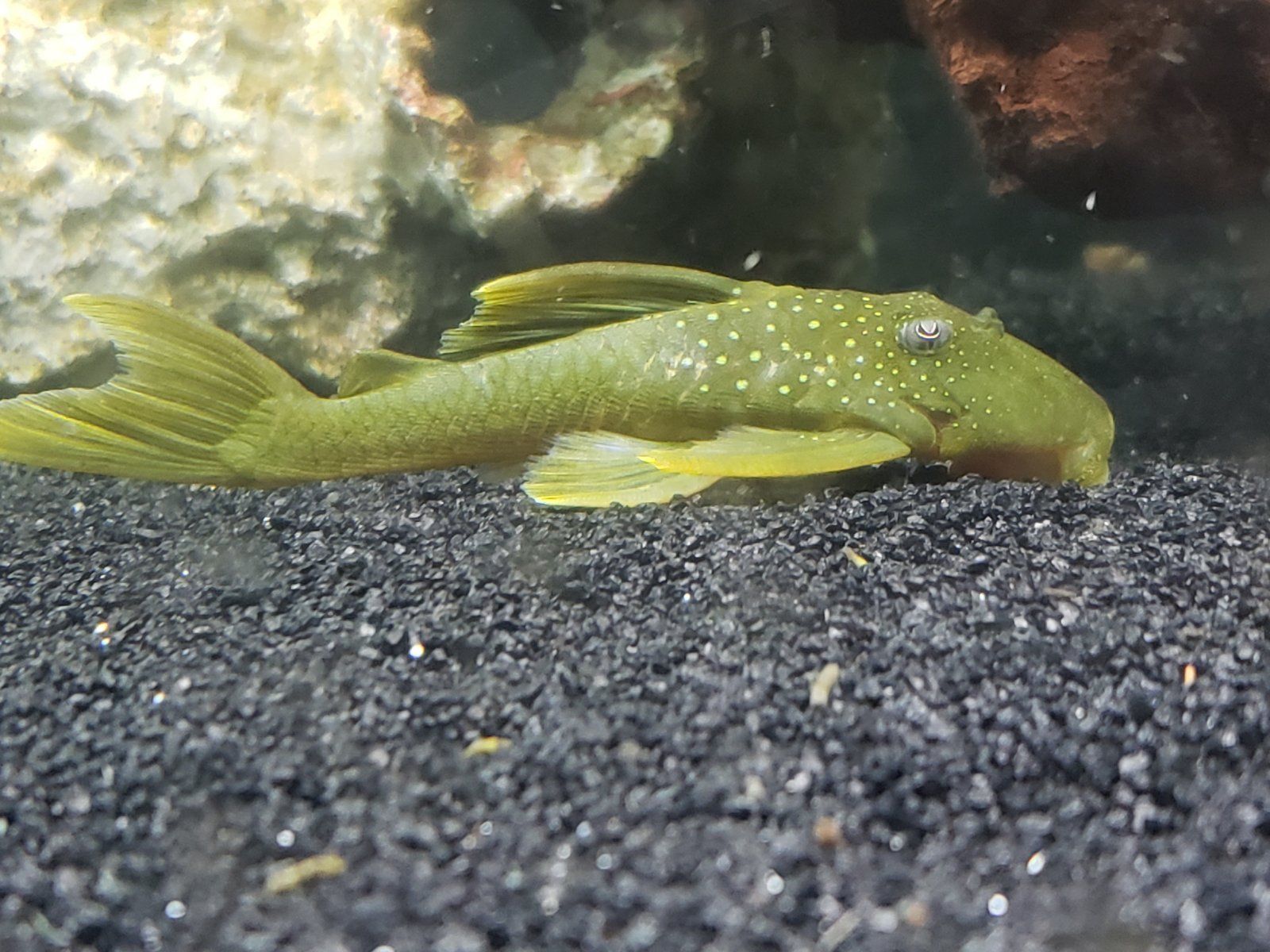 This is my L200 Green Phantom Pleco. I picked the L200 becuase they are one of my favorite colors ever, that nice calm green.
He is a recent purchase, and only just came out of qt this week. He has been very active, even during the day, and none of my other livestock take notice of him. He is housed in a 90 gallon with some eartheaters, striped headstanders, a rainbow cichlid, and a blood parrot.
He is fed Omega One veggie rounds, aquatic arts bottom feeder pellets, cucumber, zucchini, carrots, lettuce, and he also eats left over cichlid pellets and bug bites flake and micro pellet.

His favorite hiding place is under a large lava rock he is pictured next to.
Last edited by a moderator: Aug 19, 2021
OP
OP 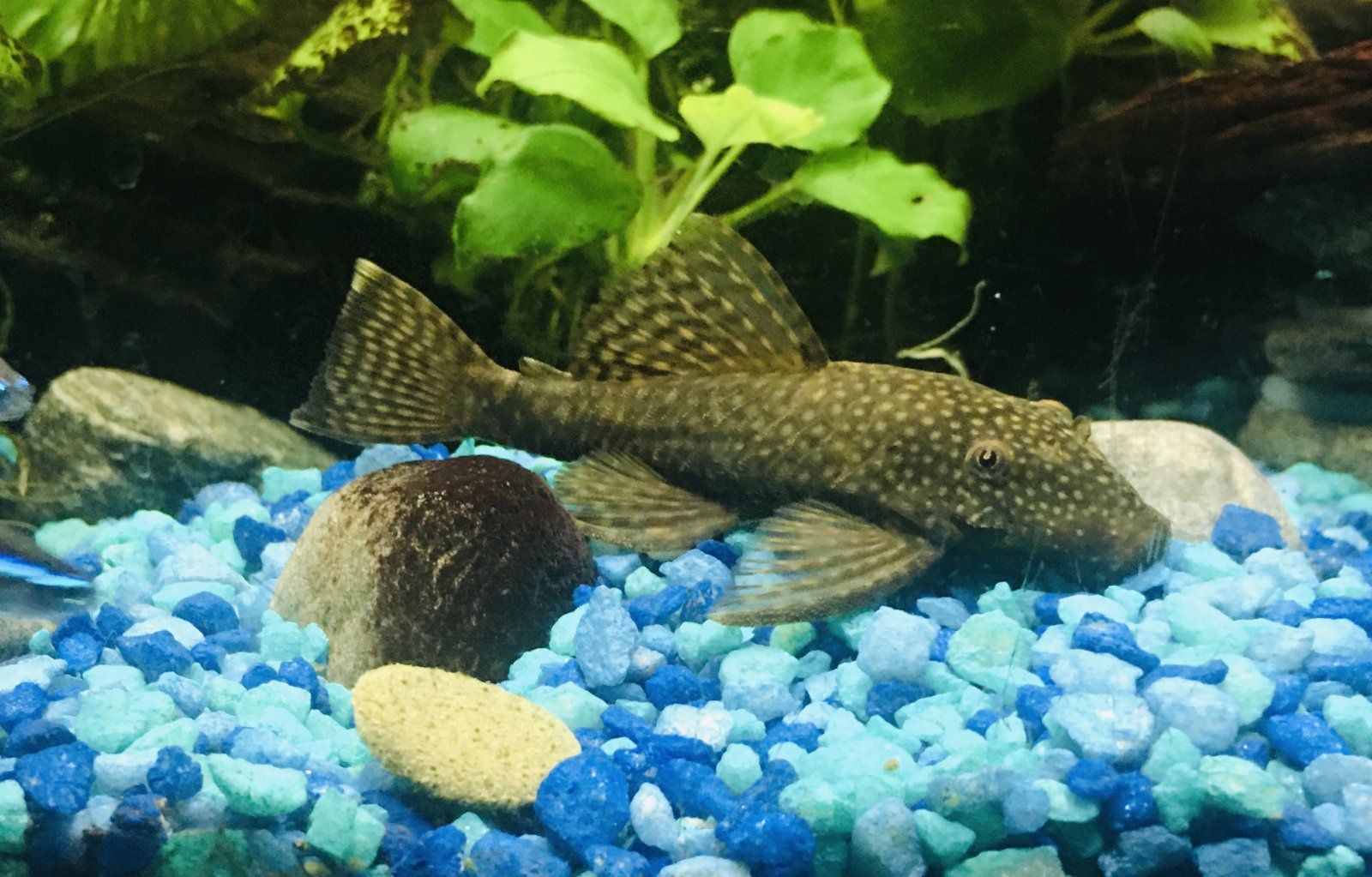 I'm entering the contest just to show that Bushynose Plecos can compete with any L-named plecos. This is Nessie (named after the Loch Ness monster of the deep). Bushynose Pleco are sometimes called Bullnose Pleco and also Bristlenose Pleco.

Nessie lives in a well planted 35 gallon tall hex tank. Her roomates include 6 Black Skirt Tetras 3 Neon Tetras (survivors), and an Asian Fisherman .
.
Nessie doesn't have a bushy nose at all so I suspect it is a female. I have another BN Pleco in a 29 gallon tank which has a very bushy nose - guaranteed to be a male. Perhaps I will try breeding them as I hear they are easy to breed.

I've had Nessie for about 4 years. She's about 5 inches long and looks very healthy. When I first got her, I acclimated her in a bowl. As I was attempting to net her over the sink to put her into the 35 gallon tall hex tank, she jumped out of the net and landed in the sink. I grabbed her tail just in time as she was very close to going down the drain. Whew...what a relief when I snagged her and plunked her into the tank.

Nessie is an algae devouring machine. She is very good at roaming

all around the plants and tanks walls as she goes about her appointed duties of keeping algae at bay, of which there is a good amount in the tank.. The only thing she asks for is an algae wafer about 3 times a week and once in a while I will drop in a blanched piece of green vegetable. She especially likes zucchini.

Nessie is not shy at all and will often appear out in the open during the day...something that many L-named Plecos don't do very often. Even my Asian Fisherman Ornament doesn’t faze her as she will eat algae off the fisherman's pole .

She is the boss

of the tank and will shoo the Black Skirt Tetras away if they try to eat her algae wafer.

Nessie knows she is good looking.

She hopes to get your vote in the August 2021 Fish of the Month contest. 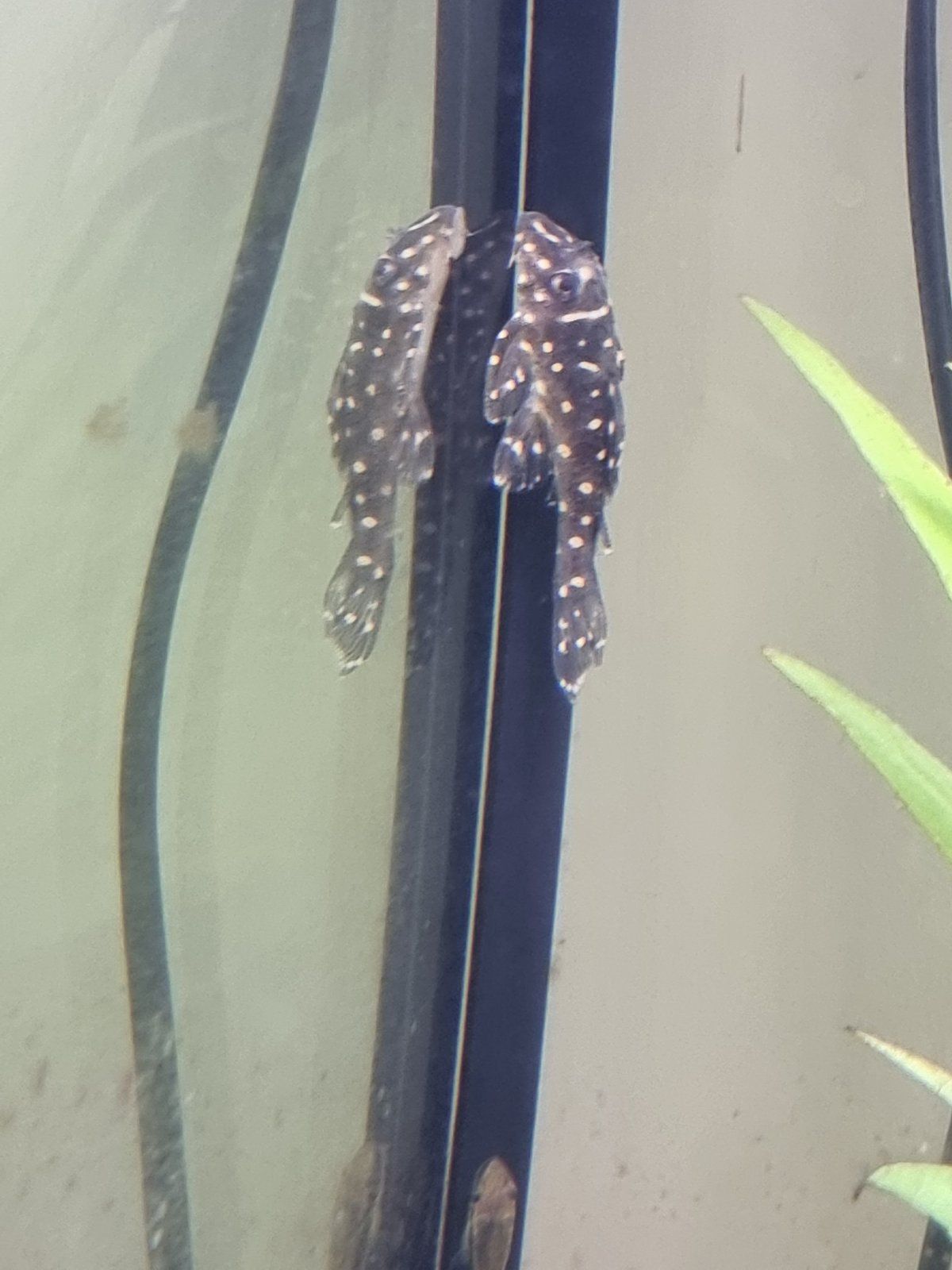 Here's my juvenile Snowball Pleco, named Olaf. He lives in my 240L community tank along with 6 assorted corys, 12 ottos, 11 cardinals, 7 pentazonas and 5 embers. I've had him just under a month and he tends to hang about at the back of the tank which makes him quite difficult to spot. The two pictures were taken in a hurry as he appeared in the corner so they are not the best.
Last edited by a moderator: Aug 19, 2021 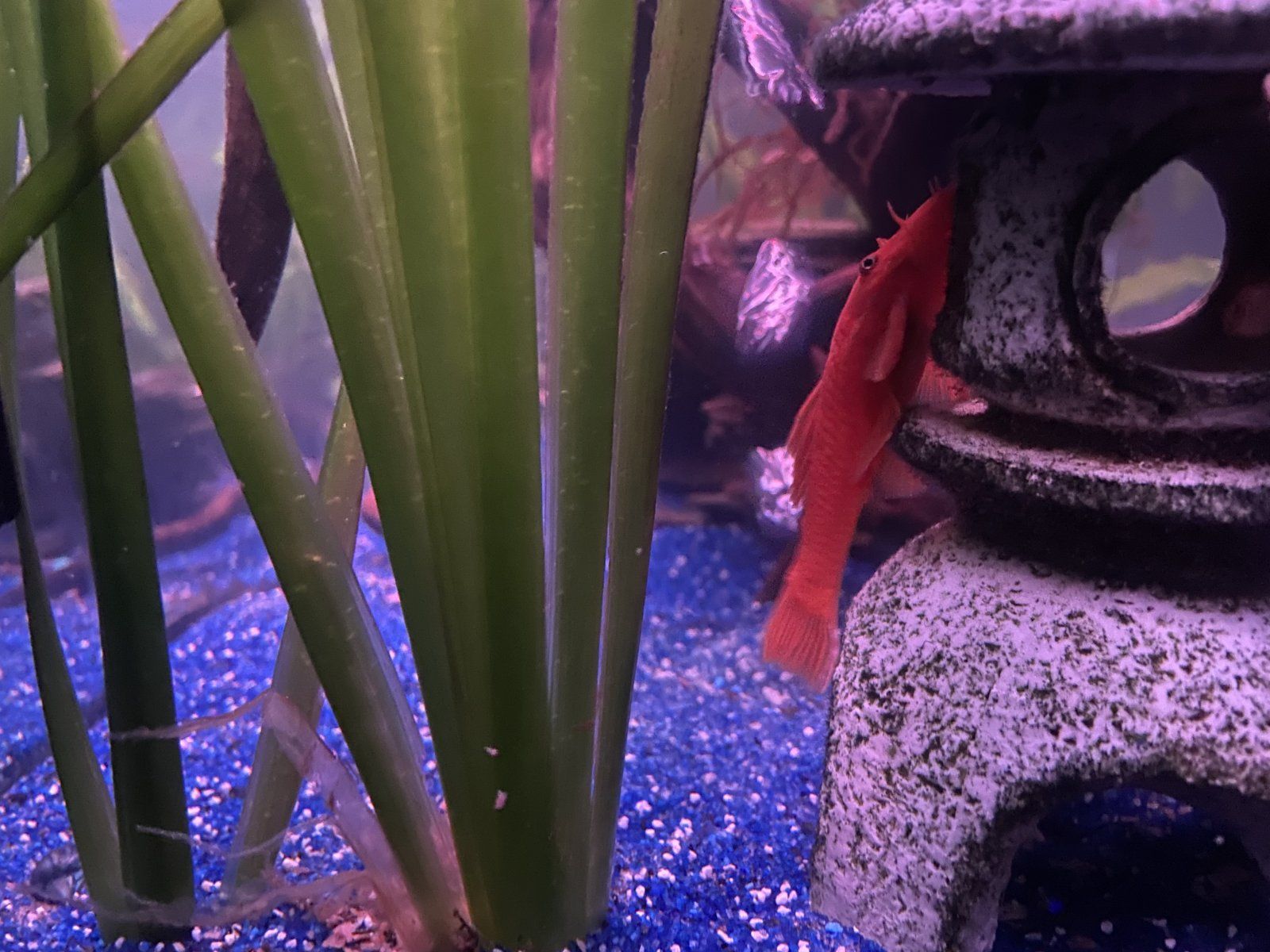 Here’s my Carrot….he’s still pretty young, probably just about a year old. Super red bristlenose pleco. I got him from a local breeder here in Maui. He’s a shy little bugger. He lives in a 55 gallon, with a albino bnp, a blue acara, 2 female polar blue convicts, 8 x-ray/pristella tetras, and 5 Buenos Aires tetras. I feed him primarily algae wafers. He also does a good job grabbing any flakes or cichlid pellets that go uneaten on the substrate, as well as still doing a decent job with the algae in the tank. As you can see the little temple decor is his favorite hiding spot. Which he can totally squeeze into which made snapping a pic real sneaky work.
Last edited by a moderator: Aug 19, 2021
OP
OP

End of Entries:
Please scroll up slowly as you review the 5 entries and then cast your vote in the poll at the top of this thread.

Our next contest will be our Tank of the Month contest. For September, we will be featuring tanks sized at 16 gallons and smaller. If you have a tank of that size, we hope you enter the contest
Last edited: Aug 24, 2021

Only 39 votes so far. We can do better than this!

Come on all those haven't done so yet, now is the time to vote.


Lets make this the most votes yet in a contest.

If you haven't already voted, now is the time.​

oh my gosh all these plecos are so gorgeous!! it’s so hard to pick one to vote!!

We have a winner!
anewbie has won Fish of the Month with his gorgeous L204 Pleco. What a great looking Pleco. Well deserved win.

And coming in 3rd place is FishNurt808 with her red Bullnose Pleco. Great pic and very pretty pleco.

Thanks to all who particpated and/or voted in our Fish of the Month contest.

Right now, we are accepting entries for our September Tank of the Month contest. This month, we are featuring tanks sized at 16 gallons and smaller. If you have a tank of that size, we hope you enter it in the contest.

Poll is now CLOSED Tank of the Month :big_boss: PLEASE VOTE! We have 8 awesome tanks entered in Fishforums' September 2021 Tank of the Month contest featuring tanks sized at 16 gallons and smaller. View all the tanks and descriptions below and then go to top of this thread and click on...
www.fishforums.net

If you wish, you can congratulate the winner in the FOTM Winner's Thread HERE