I decided to share some of my cooking adventures here. I'm a good cook, definitely. I love finding new recipes and exploring different ingredients. Tonight, I made sweet potato soup featuring cilantro, cumin and, of course, sweet potato. This earthy soup is highlighted by coriander and carmalized onion which is accented by a nice, nutty Parmesan.

I found this recipe in the most recent edition of Cooking Light. I have adjusted a few things to better suit my tastes:

Get a large microwaveable dish and place each potato in the dish. You're going to have already sliced ten longways. Place them cut side down in the dish with the water at the bottom. This will make the potato tender in just 15 minutes.

Cook the onion, chopped, over medium heat with one or two swirls of olive oil, until the onions are translucent. At this point add some coriander, cumin, red pepper, salt an pepper. I don't measure seasonings, so you may want to start out with just a smidge of each. Remember to taste! Then add your stock. Bring it to a boil.

You'll also want to remove the skin from the potatoes and discard them (or do what I do and give the skins to your dogs because they are full of nutrients). The potatoes should be cooled slightly by the point. Take half of your potatoes and half of your broth mixture and plop them in a blender. Purée and pour this half in a bowl. Repeat with the remaining potato and broth. Stir in chipped cilantro. I don't know how much I used. Probably enough for half a cup. Add finishing salt and a last grind of pepper. Garnish with shredded Parm.

I also made panini to go along with this.
Sourdough bread
Smear of mayo on each slice
Bread, Provolone layer, spinach layer, tomato layer, provolone layer, hot mustard, mayo, bread.
All toasted and yummy.

Here's a less than satisfactory image of the soup. 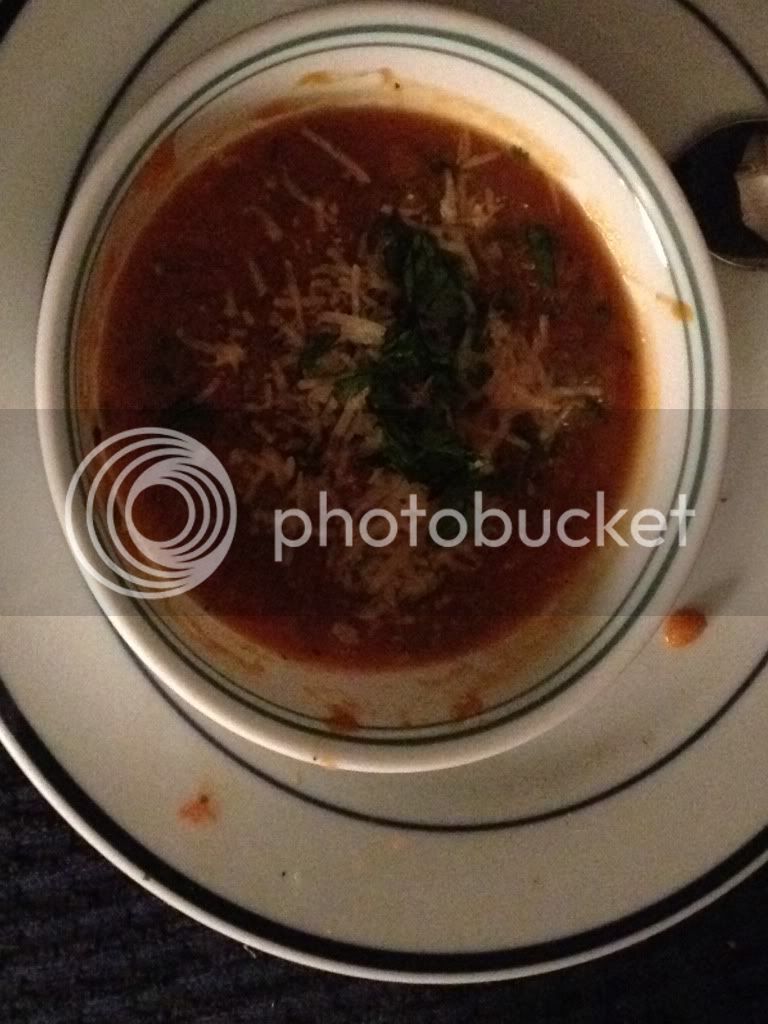 1 can garbanzo beans (2 if you want to eat on it a while; reserve liquid from one can)
Juice of one lemon (or bottled juice)
Olive oil (the bolder the oil, the better the hummus)
1-3 garlic cloves (this number depends upon size of cloves and also personal preference)
Cilantro (it's my favorite, okay?)
Red pepper
Salt
Black pepper

Dump everything in a food processor until garlic is minced and beans are smooth. If your hummus is too dry, add extra olive oil. If it is too soupy, crush up some croutons or add some panko or more beans. Serve with pita crisps or bagel chips.
You must log in or register to reply here.
Share:
Facebook Reddit Pinterest Tumblr WhatsApp Email Link