Sick betta - running out of things to try

I’ve had a betta fish for several months now. He was rescued from bensons with bad swim bladder. He would float on top of the tank and this lasted for probably a couple of weeks and resolved with fasting and a green pea. He was living in a cycled tank - to be honest I didn’t have any strips to check he parameters but his temp was around 76-78 with a heater. He was eating and doing great then I noticed he had trouble grabbing at his food. I feed him the Wardley Betta pellets - usually 2-3 twice a day. He has some live plants and a moon stone cave in his tank. I noticed he had some nematodes in the gravel and not knowing what they were at the time, I took him out and put him in hospital tank. I noticed a bump on his chin, between the gills - not discolored or anything. He did also have some slight white fuzz on his chin. I put him in a hospital tank - heated to 78, not cycled but conditioned with aquasafe. I put some Seachem polyguard in the water. He would eat flake food but not the pallets - just couldn’t grab them even when he tried. He seems to eat better over the next couple days but his fins started to get frayed. I had to do daily water changes as he was in a gallon tank (down from his usual 3 gallon) and the one day I didn’t change the water he seems to do worse, became lethargic, and would hang out in the bottom of the tank breathing heavily. I changed the water and he was better. Still couldn’t eat the pellets but his chin fuzz went away. I would put medicine in the new water with every water change. Then he started laying sideways on things - like the cave and his leaf hammock - more and more. He would eat the flakes, swim, and then kinda lay down on his side. Eventually he couldn’t swim up at all. I put him in a cup suspended in like netting to bring him upward more so he would be able to get air and so that he was still exposed to about a gallon of he heated water. He got worse, stopped eating, and would just lay there breathing heavily. After about 5 days of him not getting better with the meds, I went to bensons and they recommended API general cure suspecting gill flukes. I had been thinking swim bladder but he fasted for probably a week at this point and pooped. I couldn’t get him to eat any peas. So I got the general cure and did that for 4 days - as directed. Repeated after 2, no water changes while dosing. Actually day 3 he was still not better so I want back to bensons and bought API erythromycin. I also had some API Pimafix around. I did hours of research and found on their site that all API meds can be used together so I added the erythromycin and the Pimafix on day 3 to cover all my bases - for antibiotic, antiparasitic, and antifungal. Day 4 I changed his water because it was getting dirty. For some test strips. All parameters are good. So now he has the 3 meds - 2nd day - and he’s still not better. He swims up sometimes but it’s hard for him. Idk what I’m treating but I’m thinking at this point do anything possible because I’m thinking he’ll die anyway - hence all the meds. I attached the pics of him. Fins are frayed but not fuzzy at the ends like they were a little bit before. You would think swim bladder or parasites would result by now. He still has the bump on his chin which I don’t think is a tumor because of the sudden onset. Any ideas??

Poor boy! This is well beyond my knowledge, but I just wanted to say well done for buying a sick fish and trying to help him. I hope he gets better!

It’s either a fungal, bacterial, or toxin issue. You need to get his water tested ASAP. Most fish stores will do this for you. Keep his water super clean and do daily 50% water changes for 10 days. Usually black skin is a sign of ammonia burn or nitrite poisoning. You can swab him with methylene blue in a Q-tip several times a day to help counter act the poisoning. If you find his water parameters are ok and it’s not toxicity then start treating him with Furan-2 and Kanaplex together. The Furan-2 will treat bacterial infections and the Kanaplex is an antibiotic. This all needs to be done quickly as he is in bad shape. Please keep us posted.
OP
Y

Deanasue said:
It’s either a fungal, bacterial, or toxin issue. You need to get his water tested ASAP. Most fish stores will do this for you. Keep his water super clean and do daily 50% water changes for 10 days. Usually black skin is a sign of ammonia burn or nitrite poisoning. You can swab him with methylene blue in a Q-tip several times a day to help counter act the poisoning. If you find his water parameters are ok and it’s not toxicity then start treating him with Furan-2 and Kanaplex together. The Furan-2 will treat bacterial infections and the Kanaplex is an antibiotic. This all needs to be done quickly as he is in bad shape. Please keep us posted.
Click to expand...

IMO, Melafix and Pimafix are very weak meds that are effective in early stages of a disease. Your case is far more advanced. Erythromycin is a weaker antibiotic than Kanaplex and Furan-2 is specifically for bacterial infections. The 2 work well together. In fact, you can order Spectogram from American Aquarium Products which already have the 2 meds combined for easier dosing. If you are in a course of treatment right now then finish that. Don’t start and stop meds. I was under the assumption you were looking for a treatment plan. My apologies.
OP
Y

Yeah I agree Pimafix isn’t the strongest med. I wasn’t asking about the comparison between the meds to challenge you. I just want to understand why I’m doing what I’m doing. It sounds like you’re thinking it might be columnaris then? I know those two are recommended for that, or other gram negative bacterial infections. I don’t really know whether to switch in the middle of treatment as he’s not getting better. At this point I’ve spent about $40 on meds for him which, whatever, I don’t care as long as it helps but it’s frustrating when nothing so far has seemed to work. My local pet stores don’t carry kanaplex of furan-2 so my best bet would be to order them online and wait for delivery. It’s just weird that his fins aren’t clamped and he doesn’t have the typical signs of infection like white fuzz or slime. His fins are a tiny bit ragged at the ends. He swims up for air but can’t stay up and just drops back down and lays there. He won’t eat. His gills are pretty inflamed it looks like and won’t close. Ugh. Still the bump on the chin between the gills but maybe it’s just a protruding jaw from weight loss?

I don’t think it’s columnaris. Finish the fungal treatment while you order the other meds. The black just screams ammonia/nitrite poisoning to me but if it’s testing normal then that can’t be it. Is it possible that ammonia was high for awhile. The black usually shows up after the ammonia goes back down and skin is healing. Are his gills red? This fish looks so bad. Hold on and let me call my friend who is a vet and specializes in aquatic research of fish diseases.
Last edited: Nov 15, 2019
OP
Y

Yeah they’re pretty deep dark red, but he’s red so idk if that’s redder than they should be. The Black you’re seeing I think is more lighting. At least in the second 2 pics. But his head has always been a bit on the darker side... you would think even if there was ammonia in the water before, he’d be better in the clean hospital tank for s couple weeks now. But he’s just getting worse
OP
Y

Well, you aren’t going to like the answer U got. She feels that you rescued a fish that already had an infection and it has just gone too far. She feels netting him and moving him from tank to tank will just cause more stress. The fish is tired. She feels best thing to do is euthanize him at this point with clove oil. She said if you’re not ready then you can try the Spectogram but she doesn’t know if he’s too far gone. I’m so sorry.
OP
Y

Yeah idk if he was this sick when I rescued him or if he got sick in my tank... I rescued him several months ago and he was doing great after recovering from pretty severe swim bladder. I don’t see him getting better at that point and it’s weird because he did get better for a few days here recently but this staying on the bottom has been going on for over a week. So you may be right as far as the euthanasia. Are you referring to another moderator when you say she?

No, a friend of mine as stated above. I am so sorry.
OP
Y

Any idea where I could order the aap spectrogram? Looks like it may have been discontinued in the US

Yulia89 said:
Any idea where I could order the aap spectrogram? Looks like it may have been discontinued in the US

You have to order directly from them. American Aquarium Products. 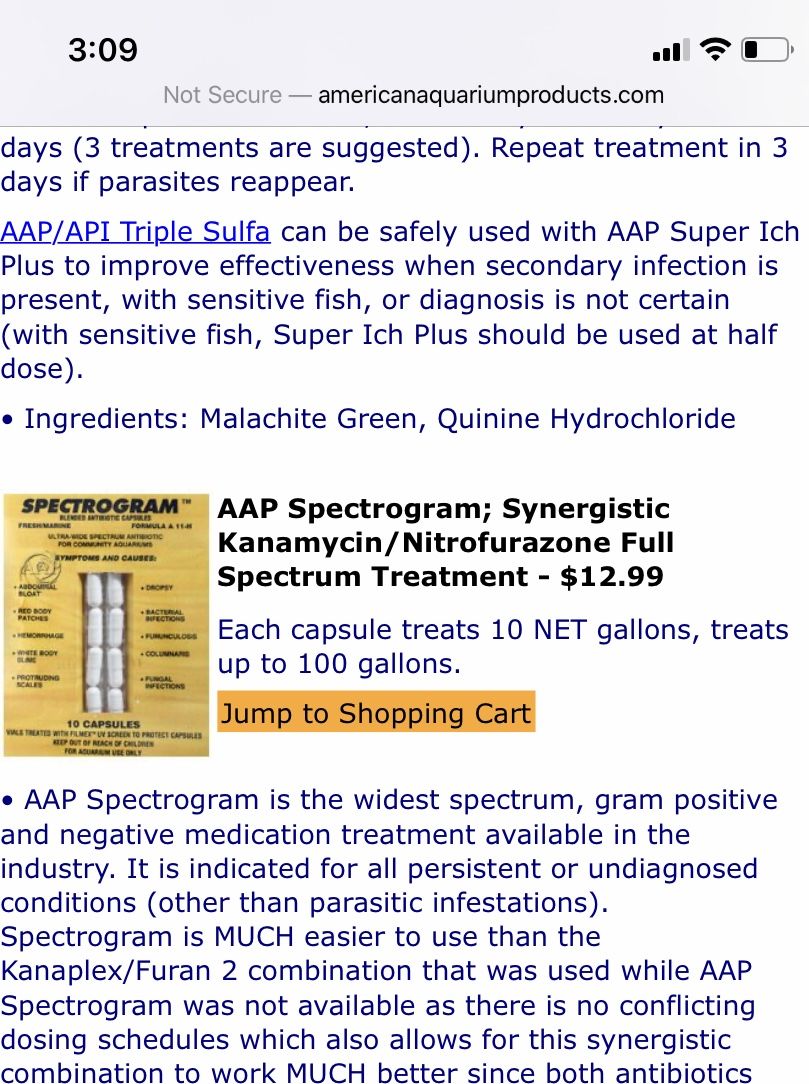 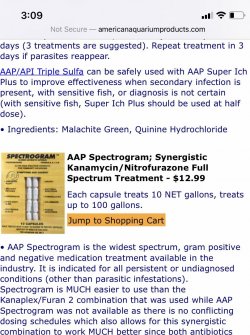 It may be quicker to order the Furan-2 and Seachem Kanaplex. It’s the same thing as Spectogram. The Spectogram is just easier to dose. If you have a Prime account you can get those 2 tomorrow.
You must log in or register to reply here.

C
Potential fin rot? Even if the parameters seem fine?