Oops, I Did It Again.

I feel quite nervous posting this because I know I said I wouldn't get another. But I did. Here's what happened.
I felt my tiger barbs weren't happy in the 95L. They weren't active and would bicker. They would just stay in the same spot so I started panicking that maybe it wasn't big enough for them. I contacted Steve who took 5 of my 11 I had to begin with and also took the 6 cherry barbs. He said the cherry barbs were being picked on so we came to a deal. He took the 6 tigers and gave me back the cherries (Talk about musical fish) Cherry barbs are fantastic, peaceful community fish I love them.
Anyway, the 4 guppies, 1 platy, 6 cherry barbs and the 15 guppy fry are having a great time in the 95L. The guppy fry will leave once they start colouring up. This left my 64L empty. I wanted more endlers.  I went to the LFS where I get my live food from. The one where I saw the white fighter in the vase. The vases were empty

I was looking around for endlers and that's when I saw him. He was pale lilac, his body was rainbow colours, it would change in the light, his head was a coppery/orange colour, his fins baby blue, his tail white and pink-I have never seen this colour combo before. My little girl was with me and she just started getting excited and said I love him, he's like rusty, I want him. So I will blame her for giving in
Obviously he is just settling into the 64L, these are the only pics I could get since he doesn't know me yet.

These I took in the car with my phone to show the multi-coloured body. Rubbish pics! 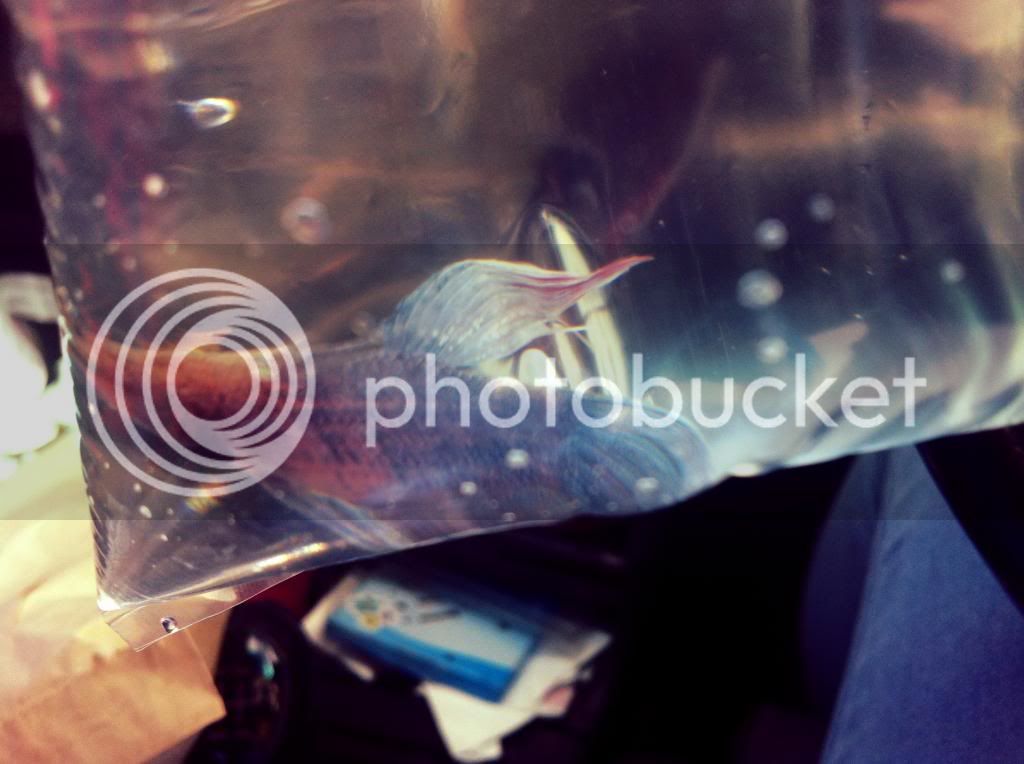 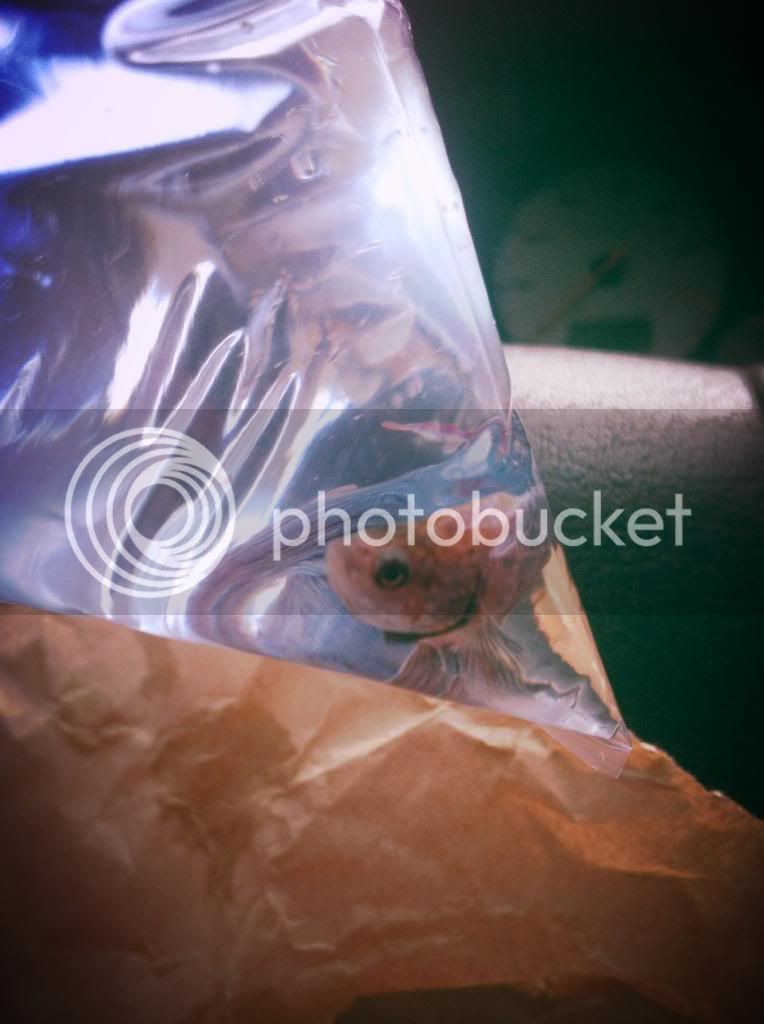 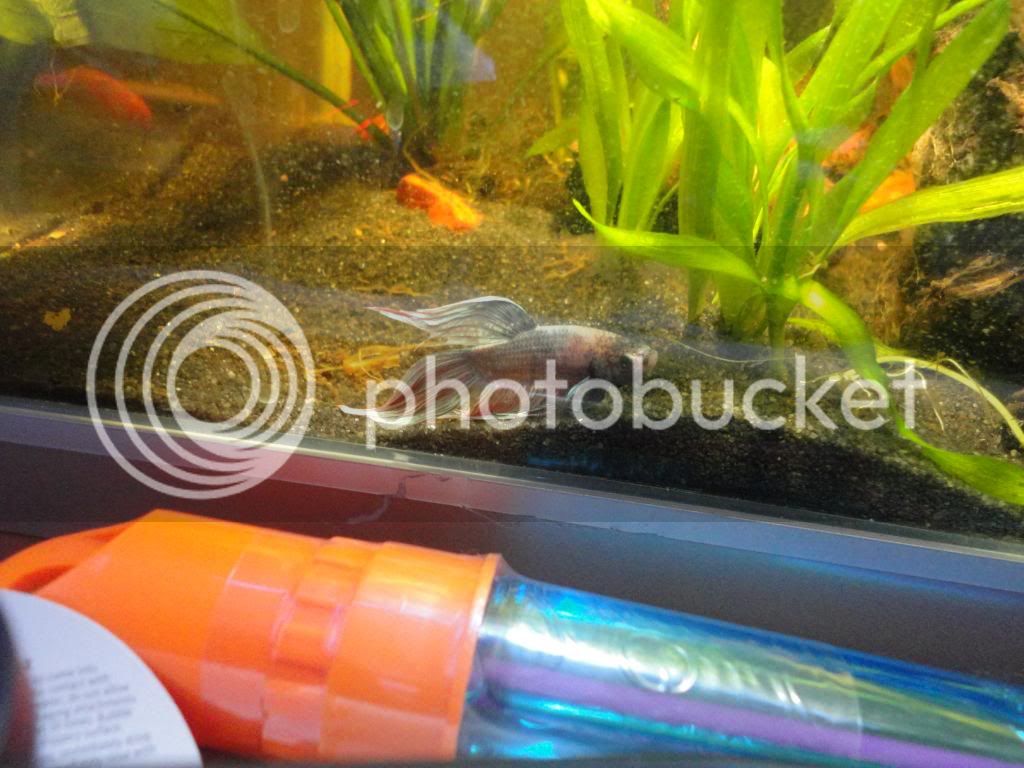 Then he had enough and was off! 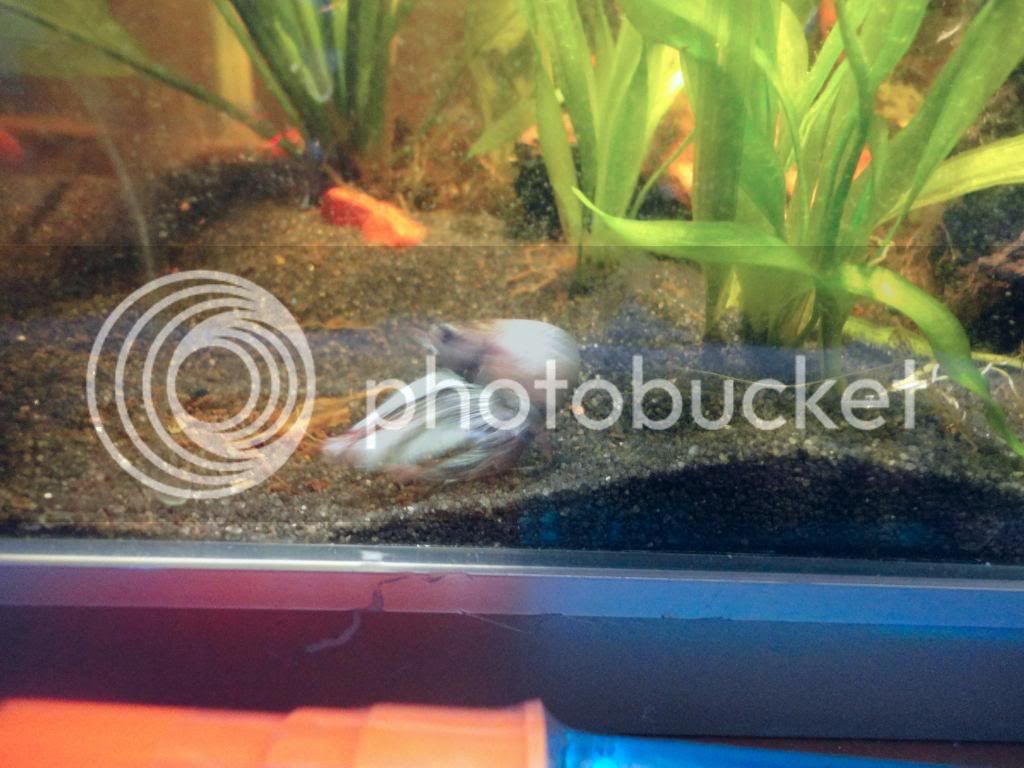 Because he's a mixture of colours and such a weird half and half body I don't know what to call him. "Oddball" springs to mind!
OP

So according to this
http

/watershed3.tripod.com/types.html
I would say multicoloured haha!

Has he got what is called marble colouring? In one of the photos he looks like Malcolm McDowell in the Clockwork Orange with one eye made up! lol
You could call him Alex (his character in that film or even Malcolm!)
OP

It'e been years since I watched that! I really dislike the name malcolm!!! I think oddballs an awesome name!
I don't know what his official colouring would be called

RCA would be the one to ask - she has quite a few and is very knowledgeable about bettas!
OP

She'll probably be popping by to have a look soon.

Wow Ny, I must admit, I'm very pleased you got another and 'oddball' is a handsome chap

Wow, he'd catch my eye too, very interesting colouring. Can't wait to see more of him and finding out if he will change his colours! High five to your little daughter for "making" you buy him! lol
OP

Thanks, he's very shy at the moment, when I switched the tank lights on he immediately swam to the bottom and sat on the sand. Made a good pic though 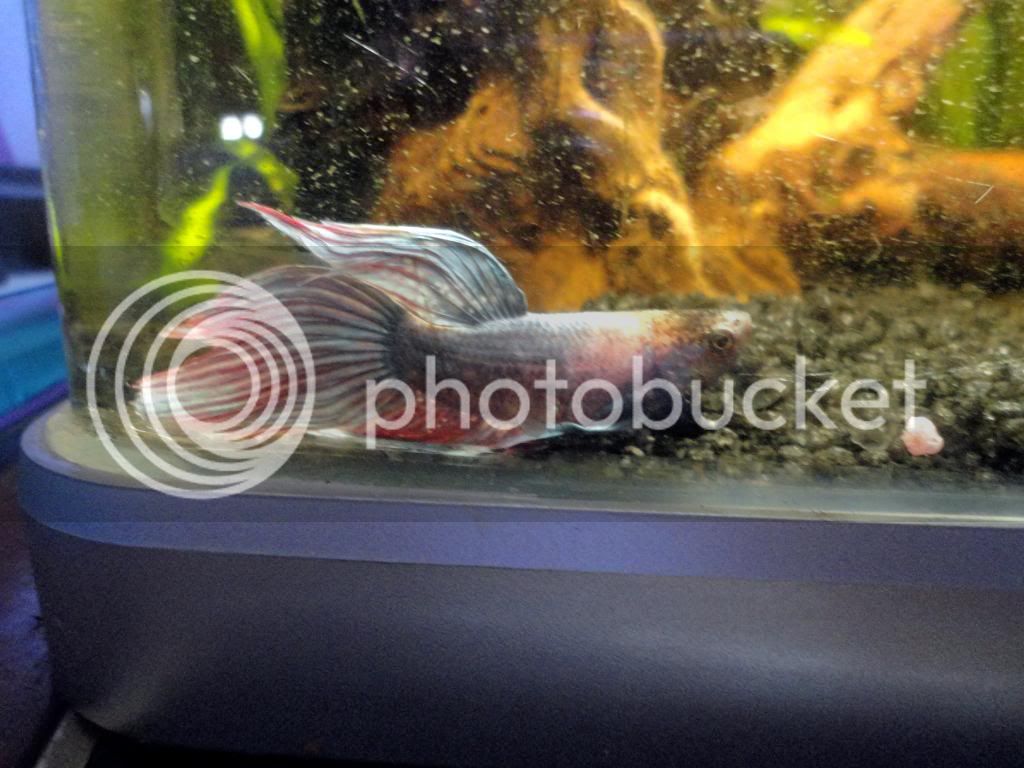 He is a cracker Ny82, reminds me somewhat of my recent loss. And he was great. Does he have a sort of irridescant shimmer to him like a moths wing? Blackberry is a great name, all my kids could come up with was Mr fish. 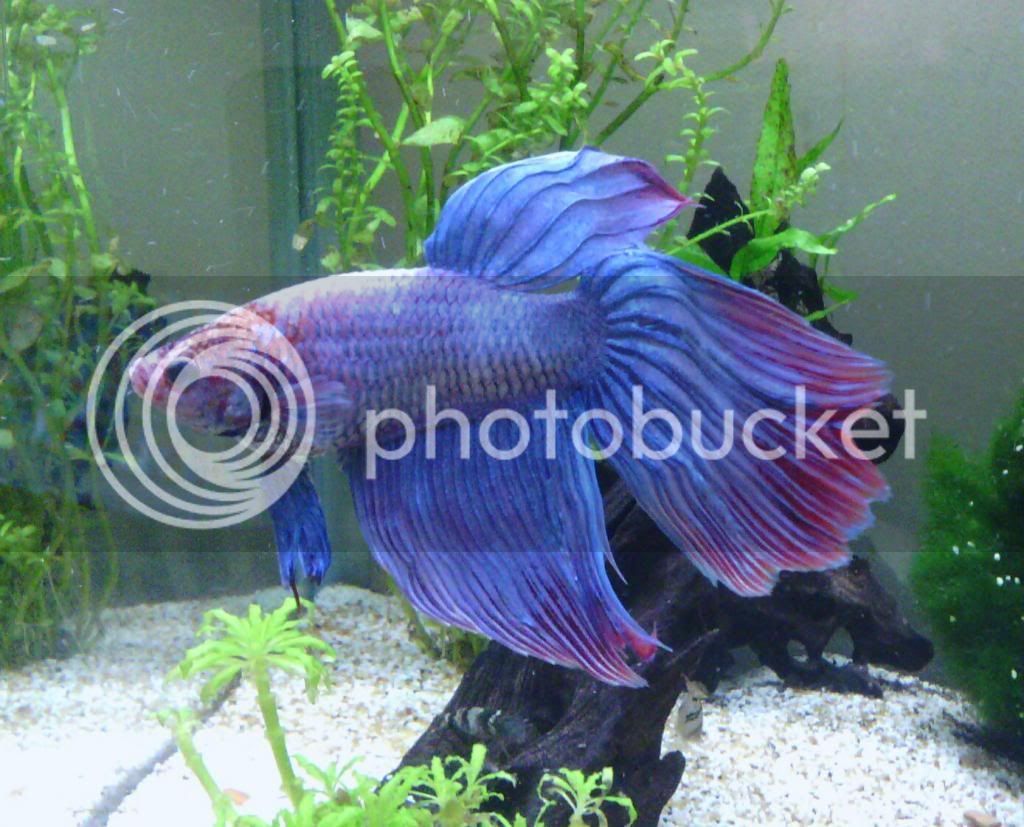 Not too dissimilar to this.
OP

372xp said:
He is a cracker Ny82, reminds me somewhat of my recent loss. And he was great. Does he have a sort of irridescant shimmer to him like a moths wing? Blackberry is a great name, all my kids could come up with was Mr fish.

I know! They look similar! Yes he does, when he swims there's a yellow and pink sheen to him. Aww bless! Mr fish is adorable!

Here's the weird part. Yesterday he just looked white from a distance. Today he has darkened, his head is  mottled purple, the middle bit is a very strange orangey colour that his head was yesterday in that pic from earlier, the rest of his body is pastel blue and his fins are pastel blue with striking pink. What a concoction!

I forgot to add-those who say siamese fighters can't swim fast have not seen mine-he moves at the speed of light when I go near the tank! 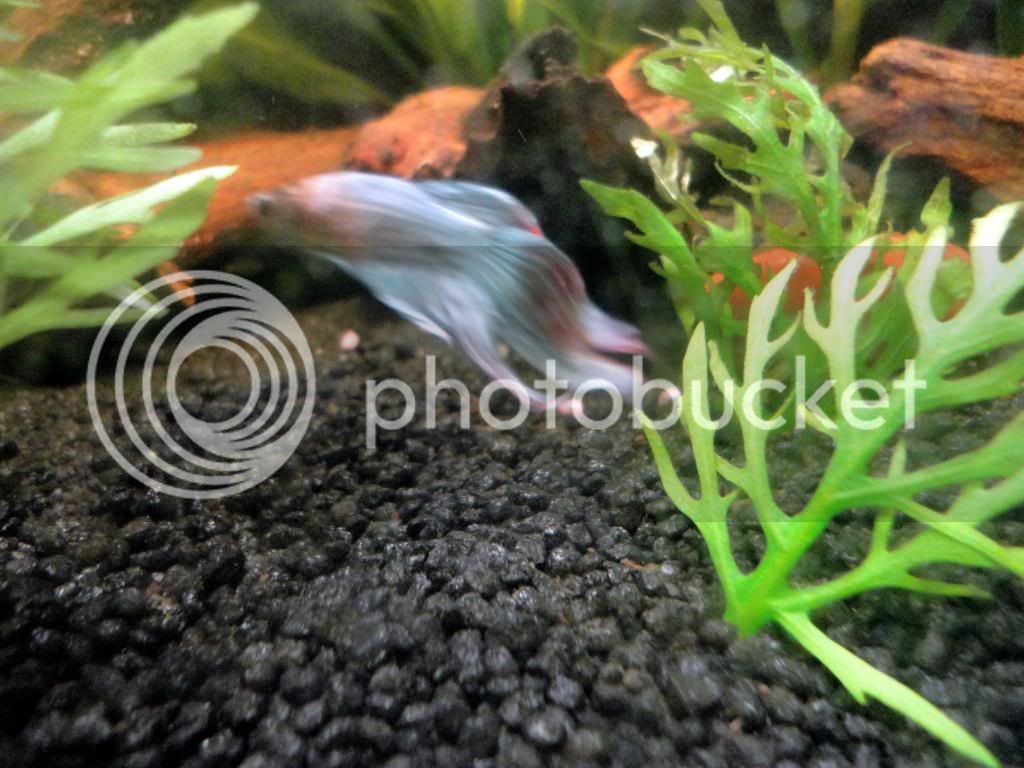 I need to get him used to me first. Then I will get the money shot

Today at 8:29 PM
avelonchii
A
K
White spot on betta?

Balloon Molly sick or near birth?

S
Not sure what this long, whiteish/transparent string of poo is? ADVICE needed