(I'm going to write out my fish keeping journey so skip to the bottom if you don't want to read a bunch!)

I'm Mariah, I am 22 years old, a college student (majoring in art education) and a very very new fish keeper! My family always have had fish but I never really took an interest through the years. I've always stuck with my dogs and cats and kind of ignored my Mom's and Sister's fishtanks.

However, that all changed when my sister ended up with some goldfish and guppies from her friends that she wasn't prepared for. She got a 29 long to start off the Goldfish, two fancy tails and a black moor. But the guppies stayed in with the Goldfish while she figured out what to do with them. It wasn't a terrible plan as all the guppies were eaten except for one lone guppy that hid in her plants. The poor little guy was pale and lethargic, probably from the stress of being with the big goldfish. I felt terrible for it and decided I would house it as soon as possible.

I ended up doing a ton of research for just this little guppy, and came home with a 10-gallon hospital tank and a 20-gallon tank, tons of food, supplies, heaters, plants, driftwood and sand. I set up the tank and only let it cycle for a week because I was stressed about the guppy getting eaten in the mean time. I know it's not ideal but did what I could. I got the water parameters perfect by the next week and brought the guppy home to the 20 gallon.

It immediately colored up and was a lively little guy. He had a real personality about him as soon as the next morning of him staying with me. However, I was really not feeling the aesthetic of the tank. One lone, tiny guppy in a 20 gallon in the middle of the living room looked a little strange. So after the 10 gallon hospital tank was fully cycled I brought home two sunset guppies and two orange dumbo guppies. The dumbo guppies were identically whereas the sunset guppies can be told apart by their tails, one has a flag tail while the other has a big moon tail. Very cute little guys.

I treated them for ich and parasites for a little over a week before moving them into my 20 gallon. Here I really saw my sister's guppies personality shine, he's a real trooper for sure.

I loved watching them together and decided I wanted some more guppies. The next fish store I went too was a little crummy and not well taken care of, but it was a long drive out so I was determined to leave with some fish. I ended up with 10 ghost shrimp and 3 guppies. One turquoise guppy, one orange and blue lyre tail, and an electric blue swordtail. If I haven't mentioned this already, I have all male guppies, it zero intention of breeding.

So I treated the shrimp and guppies for ich and parasites once again before transitioning them into the 20 gallon. This is were disaster started to hit. The guppies ich cleared up fast but the ghost shrimp were struggling hard. Majority of them had horsetail worm which I didn't even know existed before getting the little guys. I ended up with 4 dead shrimp, it was devastating. These little fellows were my responsibility and I felt like I had failed them. Of course, I knew that wasn't really the case it was the fish stores fault for not treating them sooner and had to learn a tough lesson on the lives of little creatures.

Then my biggest disaster hit, the lid on my 20 gallon is just a plastic flimsy thing, and I had seen my cat eyeballing it. One morning I woke to my guppies cowering in the taller plants, the lid half off and water everywhere. Then I saw one of my dumbo guppies floating at the top of the tank with a gash on its side and its intestines out. My cat was covered in water. I'm positive it was her, the clues line up to her, even though I didn't see it happen. To my surprise the guppy was still alive, I felt ill about it being miserable, but had no clove oil to euthanize it and was feeling to sick to consider freezing it to death.

Like a maniac, I ended up creating another hospital tank using a plastic bin. I heated it with a mini heater, put on a sponge filter, used a mix of dechlorinated water and the 20 gallon water and put the mauled guppy in the bin. I used a tad bit of aquarium salt in the hopes that the guppy would some how make it. It was a crazy idea looking back on it. The guppy lasted for the entire day, ate a tad bit but by the end it refused food. The next morning it was dead. I was devastated once again, but put some stuff on top of the two tanks to keep my cat from getting to them.

After that fiasco, the remaining shrimp and the 3 guppies were transitioned into the 20 gallon. It was awesome, they looked beautiful, were so lively, I could hand feed them and my shrimp loved pond pellets. It was so fun to watch them eat. I'm OCD so I would count all the shrimp and guppies everyday to make sure everyone was safe. One evening, after work however, I was doing a water change and found an exoskeleton that I didn't see that morning. Thought nothing of it cleaned it up and finished the water change. I went to go feed them after the water change and found that one of the shrimp was crippled. Once again I knew I was going to be dealing with fish loss.

I could not bring myself to just boil it alive, flush it down the toilet or just plain freeze it. By this point I had bought clove oil. But I could find little research on weather or not clove oil was affective on shrimp. I watched videos and all I could find was freezing them. Sickening by this, I still pushed forward, put the shrimp into a big gallon plastic bag with mixed in clove oil and decided that I would freeze it. The next day it was a frozen block and dead. It sucked and it hurt bad, again the responsibility of taking a life no matter how small is overwhelming. I grieved but moved on fast enough.

Here I got to my current period of peace. All five shrimp and all six remaining guppies are happy and healthy. It took what felt like forever but I'm finally able to just enjoy the fish tank. I was discouraged many times and almost wanted to give up and give the fish up, but kept going because I felt bad about it all. And honestly I think its worth it. My plants are growing fairly well, the fish are happy and friendly with me, and the shrimp are living their best lives.

During my research for all my fish and such, I really fell in love with my family's plecos, a different pleco in each of their tanks. They are such cute little and cool little critters. I also fell in love with my moms tiger oscar pair, they are really are like little water dogs. Now I don't have a 150 gallon or even a 55 gallon tank like my family does but I know for certain I want those fish, or well, something similar to them but in bite size form.

So I ended up getting a dwarf snowball pleco, he's being shipping and coming in this week. I am overjoyed about it and cannot wait to get him in. He's apparently already full grown and only 3 inches long. Unknown age but that's okay by me. Hopefully my age of peace will continue on with this pleco. I've heard accounts that they do eat nano shrimp and the like but then others say they completely ignore shrimp. So, hopefully that goes well... If anything goes wrong the shrimp
will just have to be permanently moved into the hospital/quarantine tank.

Now my goal for the future is to get a small cichlid for my 20 gallon as the main attraction of my tank. I'm currently thinking about Ram cichlids, especially the electric blue variety, but I am on the fence. I would just want two, but from what I'm reading they are not a beginner friendly fish. So I may have to wait awhile, get some more experience and learn a bit more before I make the purchase. But that's my distant plan, for now the tank is right where I want it, except for the incoming pleco.

This whole experience has been a wild ride but I'm staying on it and hoping to really dive deep into the fish keeping community from now on.

I'll attach some images of my tank and some pictures of my fish and shrimp if possible. Let me know if you have any ideas for me or concerns on my journey! I can even give my water parameters so you can see if I'm doing this whole thing right by my fish.

I dose my plants with fertilizer every day, feed the guppies and shrimp 1-2 times a day and occasionally skip them a day, which will get them to munch on the algae in the tank. They get pond pellets, brine shrimp, algae wafers, blood worms, and guppy pellets. During water changes I give a dash of beneficial bacteria, an iron supplement, a carbon supplement, and the dechlorinator. My java ferns ended up completely withering away but my anubias nana petite and moneywarts (I think its called) and these melon leaf plants (forget the name wow) are doing great so far. Things are good I think, and hopefully I'm doing right by everything in my tank.

Thanks for reading if you got all the way through, if not tl:dr - I'm new to fish keeping, had a lot of issues, but I'm doing better now and feeling invigorated by my successes. 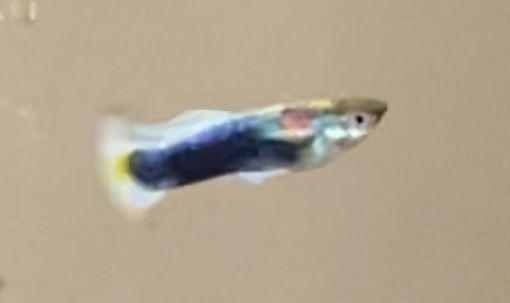 The original lone guppy, no clue what type it is, I've tried researching but haven't found any like it, he's a vibrant little guy though, my iphone camera does not do him justice. 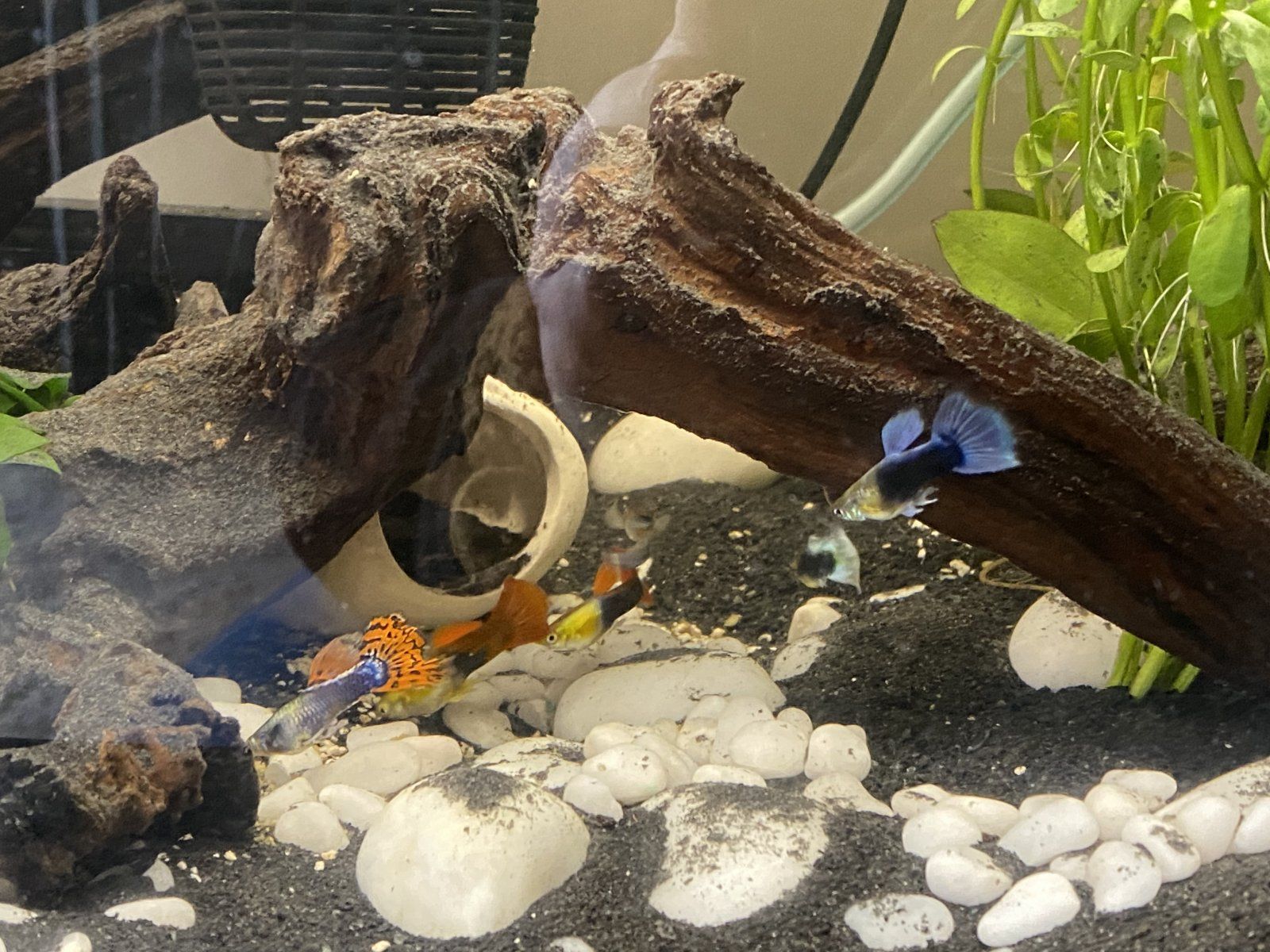 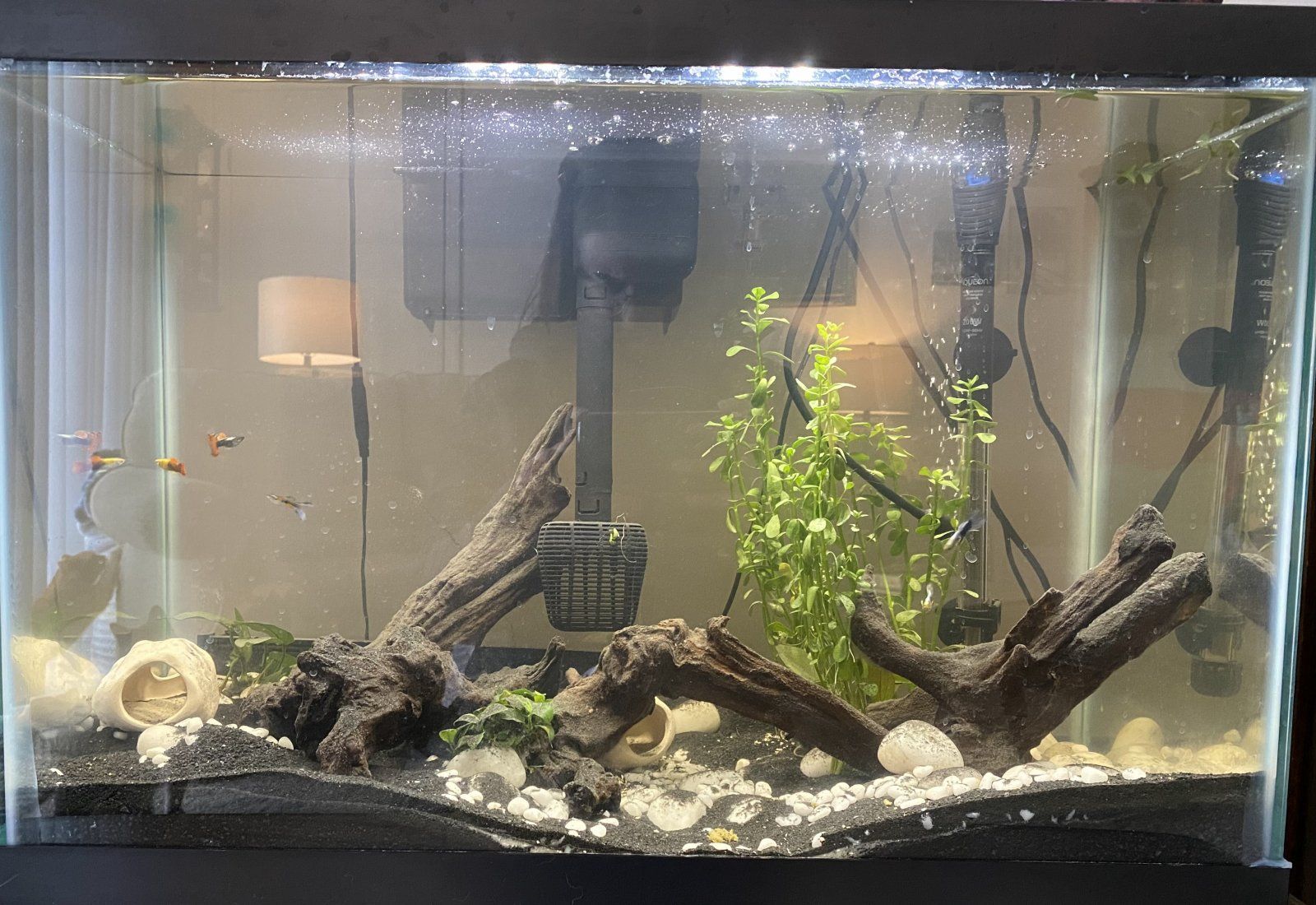 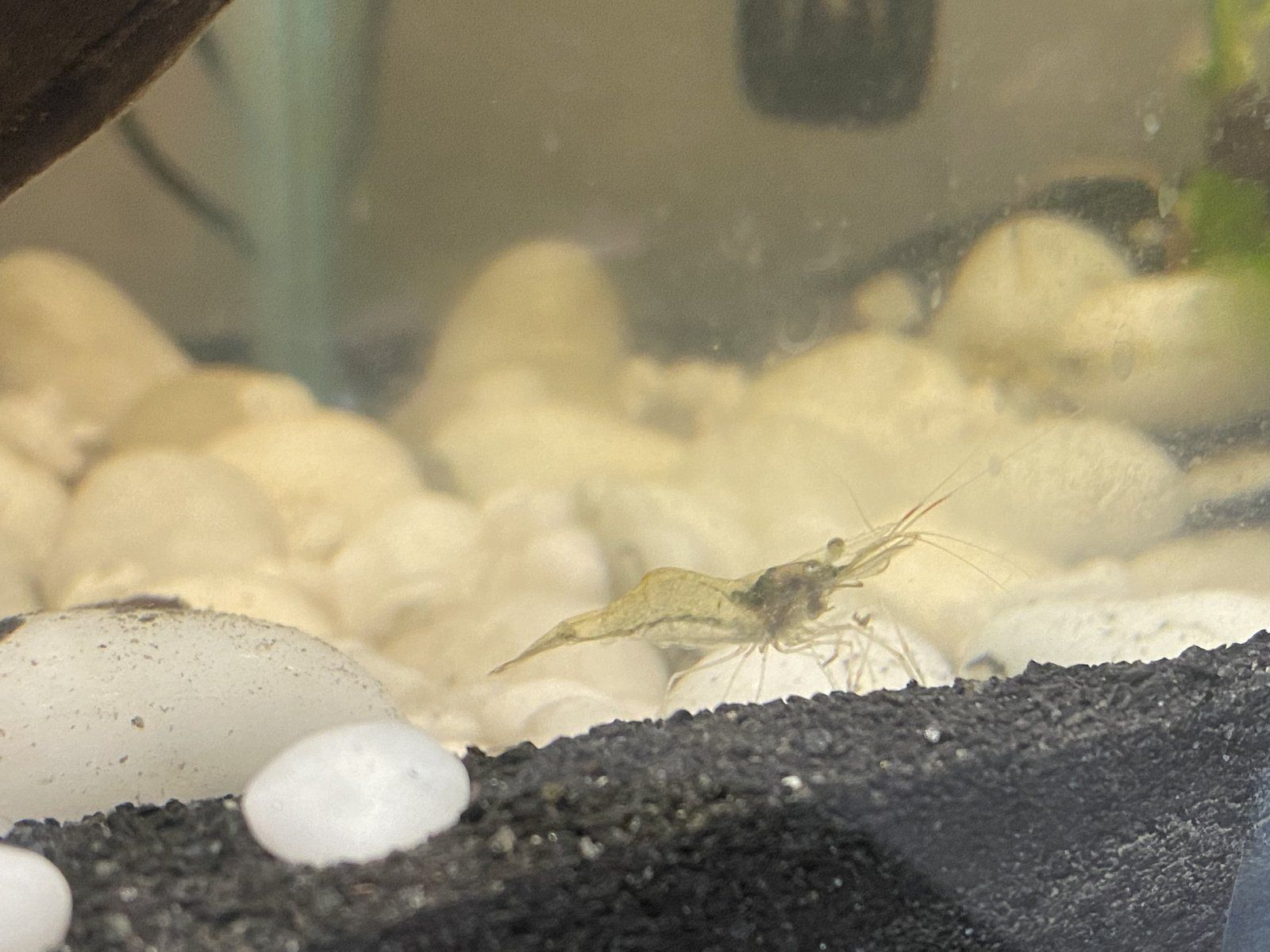 This is the current state of my tank. Not a beautiful aquascape or anything like that but it's fine enough for me.

A not so great close up of the guppies interacting.

And then here's just one of the ghost shrimp, hanging out, doing it's thing.

Well that's about it!

Hi and welcome to the forum
You must log in or register to reply here.