We have one bonded pair of gold rams. They were in our 55 gallon tank until they spawned the first time (we didn't know if they would yet at that time) and the male became too aggressive to the other rams and fish in that tank. So we set up a 20 gallon planted tank for them. We also moved a dwarf guarami with them because he was so much smaller than the other two guarami and they were picking on him more and more. We have a few otos in there to keep our plants/tank clean and at present we have 4 juvenile boesamani in there but they will move to our 50 gal when they get a little bigger. My husband set the tank up the proper way for plants to thrive and added few varieties of plants, driftwood and spider wood. We started the tank from the cycled 50 gal and it was good to go. They have been there for about a month. We keep the temp at 82 and alternative flame/frozen food every other day. The 1st time spawned in big tank they ate all the eggs. They spawned soon after moving to the 20 gal but once again the male ate the eggs. We we're considering moving another male in and moving him out but I talked him out of that because we aren't breeders, I want happy fish. Sunday we noticed eggs again. We figured he'd eat em so we didn't get our hopes up. Last night we noticed we had wigglers. We were ecstatic, we haven't made it this far yet. We looked in the tank about an hour later to realize momma ram ate her wigglers. We were bummed. Tonight we noticed the rams at the back of the tank, taking turns leaving and coming back and upon closer inspection realized what happened last night. The momma ram wasn't eating her wigglers, she was moving them to a small pit they made for them at the back of the tank. We have our wigglers still and they are being great parent. Long post but thanks for hanging in. I wanted to tell their story and we are up to date. I'm so excited and like I said we aren't breeders, just hobbyist that love our fish. My husband, when younger, did breed fish but not as an older adult. I never have at all so I've been reading up on what to expect when expecting fry lol. I am one proud fish lady right now!

Sent from my LGLS775 using Tapatalk 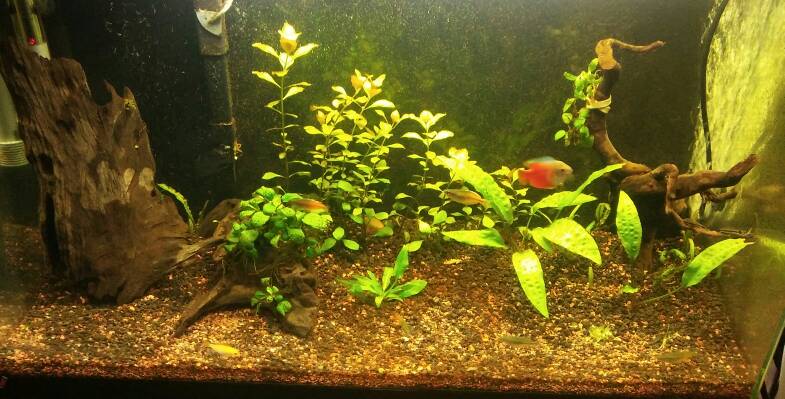 Nice
You must log in or register to reply here.

Something's in the water!

Need help- considering selling my tanks the stress is too much.