Alm0stAwesome said:
I've been really disapointed with my cardinal tetras i think they are gorgeous but...well they move around like my husband in a grocery store; like they aren't really sure where they're going, constantly doubling back on themselves. I need a fish that swims with purpose!

It's ok, that only made sense in my head

no, no, it made sense to me too, my husband does exactly the same

Clown plecs...you won't see them at all if they have enough wood to keep them happy but you'll sure know they're there because of the mess! They also don't eat algae at all. He's still one of my husband's favourites because whenever you do spot him it feels like Christmas and he would never get rid of him (wonder if he'd actually notice though!) but I would swap for a standard BN any day.

MBOU said:
I could happily slate all your common livebearers and neons and boring ole common fish that everyone has because they cant think outside the box
Click to expand...

eeee, that's a bit close to the bone for a lot of ppl lol

Guppies. They're very pretty but they have no personality whatsoever. They just swim around all the time. I have a dwarf gourami and I love him - you can almost see the thought processes as he's swimming around, but with guppies it just seems aimless. They never stop.

I started off with seven guppies but a few deaths has gotten me down to four now. I'm waiting for them all to die so I can get something else.

Iv had a group of 5 piranhas and one was an absolute monster. Would attack and eat anything in the tank. Killed all his tank mates (the other piranhas) within a year and got to around 8 inches. They are skittish but I found that mine got used to the lights being on after a while.

The Fish I find disappointing and I just wouldn't have are livebearers and angels. These I would say have to be my least favourites. I just have no interest in them at all. Only time Iv bought an angel was for my daughters vision 180 (I had a vision 180 at the time and she wanted the same tank in her room lol)

Alm0stAwesome said:
I've been really disapointed with my cardinal tetras i think they are gorgeous but...well they move around like my husband in a grocery store; like they aren't really sure where they're going, constantly doubling back on themselves. I need a fish that swims with purpose!
Click to expand...

Until now I thought it was just me that found these fish uber boring. But what I found most annoying is that their little cousins aka green neon tetras were the complete opposite. They are under an inch and love to school and play. And what I found most interesting is that under the t5's they changed colors according to what position they were in the tank ie top/middle/bottom. At the top they were grey bodied and with a very bright green (almost shining) neon band. At the bottom they were black with a blue band. Yes and yup, I know they don't physically change color and it's just the light reflecting but it was always amazing to watch. 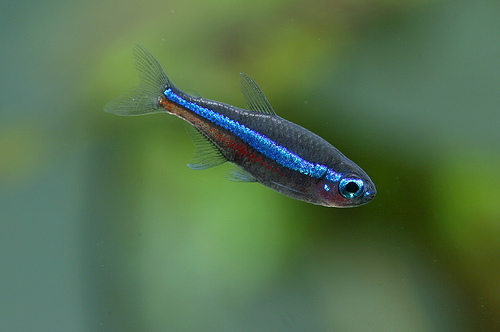 I think I'm going to go buy a school today. Just have to make a few calls and see if anyone has them in stock! The power of nostalgia...

CezzaXV said:
I started off with seven guppies but a few deaths has gotten me down to four now. I'm waiting for them all to die so I can get something else.
Click to expand...

You could always advertise them as available for free. I'm sure someone would have them. As it goes, I'd have them myself, but IIRC, you're in South Devon, aren't you?
OP

MBOU said:
Talking Catfish (Spotted or Striped Dora) is just a really pointless species to keep! I had mine for 3 years and it only moved when I moved it or when it inhaled and sucked food towards it occasionally... but it just sat in a corner, not even hiding... just... sitting there... for 3 years... doing nothing! I had to poke it daily to check it was alive and even then it took several pokes to be sure!
Click to expand...

This had me in stitches!

MBOU said:
Talking Catfish (Spotted or Striped Dora) is just a really pointless species to keep! I had mine for 3 years and it only moved when I moved it or when it inhaled and sucked food towards it occasionally... but it just sat in a corner, not even hiding... just... sitting there... for 3 years... doing nothing! I had to poke it daily to check it was alive and even then it took several pokes to be sure!
Click to expand...

I've got a spotted talking cat that's like that; we see it once every two or three years unless we scare it out when we're cleaning

Our striped one is out a couple of times a week though.

Mine was huge, it rarely ate but was morbidly obese even when it kind of fell into a fishbag and followed me home

It literally looked like it had swallowed a tennis ball! Maybe it had a tumour or something

but it was a tennis ball with a catfish wrapped round it! It couldnt even lay flat in the tank, was forever face up or down rocking on its huge belly! Though in all fairness it was in a sump tank with malawis before i 'rescued' it and i dread to think how many it ate because the beastly thing was a good 20cm long not counting whiskers and tail!

Its when I forgot it was there and lifted up the piece of bogwood and we both had heart attacks and it would 'creak' at me really angrily! Darned thing nearly had myfinger off! I went to pick it up round its middle one time (thinking it was dead!) and it suddenly clamped its pectoral fins tight to its body, slicing a finger almost to the bone which meant I had an allergic reaction

I feel mean now... maybe he was ok in his own special way

Guppies and Piranhas are the worst fish

Uuuuum....this is hard. There aren't really any fish I find disappointing as such, just wouldn't go out and get them again and that list is a large list what not only includes mollies, guppies etc but also includes oscars, gourami's, kribs betta's etc. Like i said, nothing wrong with these fish just that I wouldn't go out and buy them again.

I would not go as far as disappointing, but in terms of not living upto my own preconceived expectations...

Yellow Tail Congo Tetras (Alestopetersius caudalis): Maturing males get really nasty with each other, often having group jousting battles, which produced massive flank injuries that eventually killed the fish depsite meds and water changes. Ended up rehoming my last few, in hindsight I think my group was all male after the only female died on the first night after being brought home from the fish store.

Pyjama Synos (Synodontis flavitaeniata): Supposed to be a very social syno, but my four "teenagers" (~6-12cm SL) are constantly convered in white bite mark scars, thankfully the wounds do not break the skin unlike the above! A little better now they are in my 5x2x2, more room to get away from each other I guess

Upside Down Synos (Synodontis nigriventris): Supposed to be very social, which they seem to be in the middle of the night when I've filmed them on my night vision camera, but I never see them out and about during daylight hours (either swimming around as a group or all "treading water" in one area of their 48x12x15).

Clown Syno (Synodontis decora): I've had a gorgeous ~18cm specimen for over 18 months now, probably my favourite fish in my 6 tanks in terms of colouration/markings, but he(?) is so reclusive for a fairly chunky fish! I only discovered they were a schooling syno a few months following ownership, so I jumped on the chance to buy 6 ~3cm youngsters last summer, which growing really nicely in my 48x12x15 and were ~8-12cm SL by February and just getting to the stage where I was seriously thinking about introducing them to the 5x2x2 to join my original specimen... But then my worst tank disaster to date kicked in, I lost all 6 youngsters to a really nasty/rapid case of Ich within a week of spotting there was an issue, along with Steatocranus casuarius "dad" (in one of my profile photos) and one Synodontis nigriventris (plus several Ilyodon xantusi fry, inevitable casualties when I was advised that I ought to hit this outbreak hard with full dose Protozin and a low concentration of salt). I still beat myself up about this regularly, nearly five months on. My single specimen still lives in the 5x2x2 community, but he might be moving to someone trying to rebuild a S. decora group in the near future, which for the sake of this lovely catfish I'm happy to do as I'm not sure I have the strength of character to try and grow on another batch of youngsters and I cannot afford to buy a number of decent sized specimens at ~£40 a pop.

I ain't gettin on no plane fool

Discus! king of the tropical fish my.....

Yeah they look nice but that soon rubs off IMO, would sell mine if i knew they would go to a good home
You must log in or register to reply here.

24 minutes ago
Ichthys
I
T
Tumor?