hope everyone is well?!

So I have had a 34 G/127 L tank sitting under the house for months now as the old boy wouldn’t let me set it up!! Well, I have whinged and harped the much that he finally said yes and the shrimps are going to be upgrading to this tank!!!

Any tips would be great on how to do the move once I’m up and running.

I know @essjay has a great shrimp tank

I moved my shrimp colony a few years ago when I had to shut down the tank they were in, then again a couple of months ago when I moved them to their current 6 gallon/23 litre tank.
What do you need to know about 'doing the move'?
OP

essjay said:
My shrimp tank is 1/5 the size of this one.

I moved my shrimp colony a few years ago when I had to shut down the tank they were in, then again a couple of months ago when I moved them to their current 6 gallon/23 litre tank.
What do you need to know about 'doing the move'?
Click to expand...

I just want to do it as delicately as I can without disturbing and stressing them out to much. The only thing new that I will be putting down is sand substrate and obviously fresh water
OP

I also have a trillion little babies

A few years ago I had shrimps, Boraras urophthalmoides and pygmy cories in a tank in the kitchen. I had to close the tank when the kitchen was altered.
What I did was to siphon some water into a bucket, then move the plants in there. I had only plants attached to wood and hornwort anchored in some wood and the tops floating so that was easy for me to do. I then caught the fish and as many shrimps as I could find and put them in the bucket with the plants. The babies were the worst as they are so tiny. Then I emptied the tank. I siphoned the water into a bucket, hovering the tube just above the sand, then went through the water with a jug to find any shrimps. When I got down to the last couple of inches I siphoned the sand up, and again checked the water for shrimps before emptying it away. I know I would have missed some babies, but I did count 92 shrimps of all ages into the bucket with the plants and fish.
I put the plants into main main tank, then gently scooped water from the bucket into the main tank, with fish and shrimps in every jugful.
OP

As we know they are such delicate little ones. Do you think I should let the tank settle for a week before I move them over? I will be cleaning new sand and filling and also fresh de chlorinated water using prime. I will add one of the sponge filters from the tank and other bits and pieces to help instantly establish. Or do you think it’s okay to move everything over at once? Both sponge filters, driftwood and moss, plants etc

I moved mine into an established tank, but in your position I think I would set up the tank, then move some of the decor over and leave it like that for a week, then move the shrimps, filter and the rest of the decor.

Is there any chance of moving the substrate fro the tank they are in now? Or some of it?
OP

Yes I can move some or most of that too and then remove the older gravel from the tank down the track.

The filter you'll be moving over, is it the one from the current tank? Wait, move one and leave one? That's actually great, that's what I would do, given the choice.

When I set up my new shrimp tank a couple of weeks ago, I had to do it fast, so didn't have this benefit, and I moved over a double sponge filter from their main tank to the new one. Be prepared that you'll likely have a mini cycle in the new tank, even with an established filter - just because you're losing all the BB from the tank and substrate, and it takes a few days for the colony to re-grow. But if you have two filters, that's great. Set up the new tank with your new sand and water etc, move one filter and some plants, test and do water changes to ride out mini cycle. Mine was just low nitrite readings for a few days that needed 50% daily water changes for around four days (I made a thread because I was confused and concerned for shrimp) and shrimp and fish still managed just fine. Neocaridinas are sometimes tough little things.

Given the luxury of riding out that week of the mini-cycle in the new tank, while shrimp were safely in the old one, that's what I'd prefer. The old tank likely won't mini-cycle since shrimp bioload is so low, and even with losing one sponge filter, the remaining BB all over that substrate and tank will probably handle it just fine, but of course do water tests to make sure.

For as delicate as shrimp can be, my colony handled the move, captures, and clean tank like champs. Since my move was an emergency I had to just net them all out into a bucket, drip acclimate them to make myself feel better about it, and move them into a clean tank. New substrate, brand new in-vitro grown plants, new clean hardscape, everything but the sponge filter was clean and new, so no algae or biofilm. Not ideal, but had to be done. So I needed to feed the 40 odd shrimp daily, which probably didn't help mini cycle but had to be done, but the shrimp handled the move, the reliance on supplementary food and the mini cycle like champs. 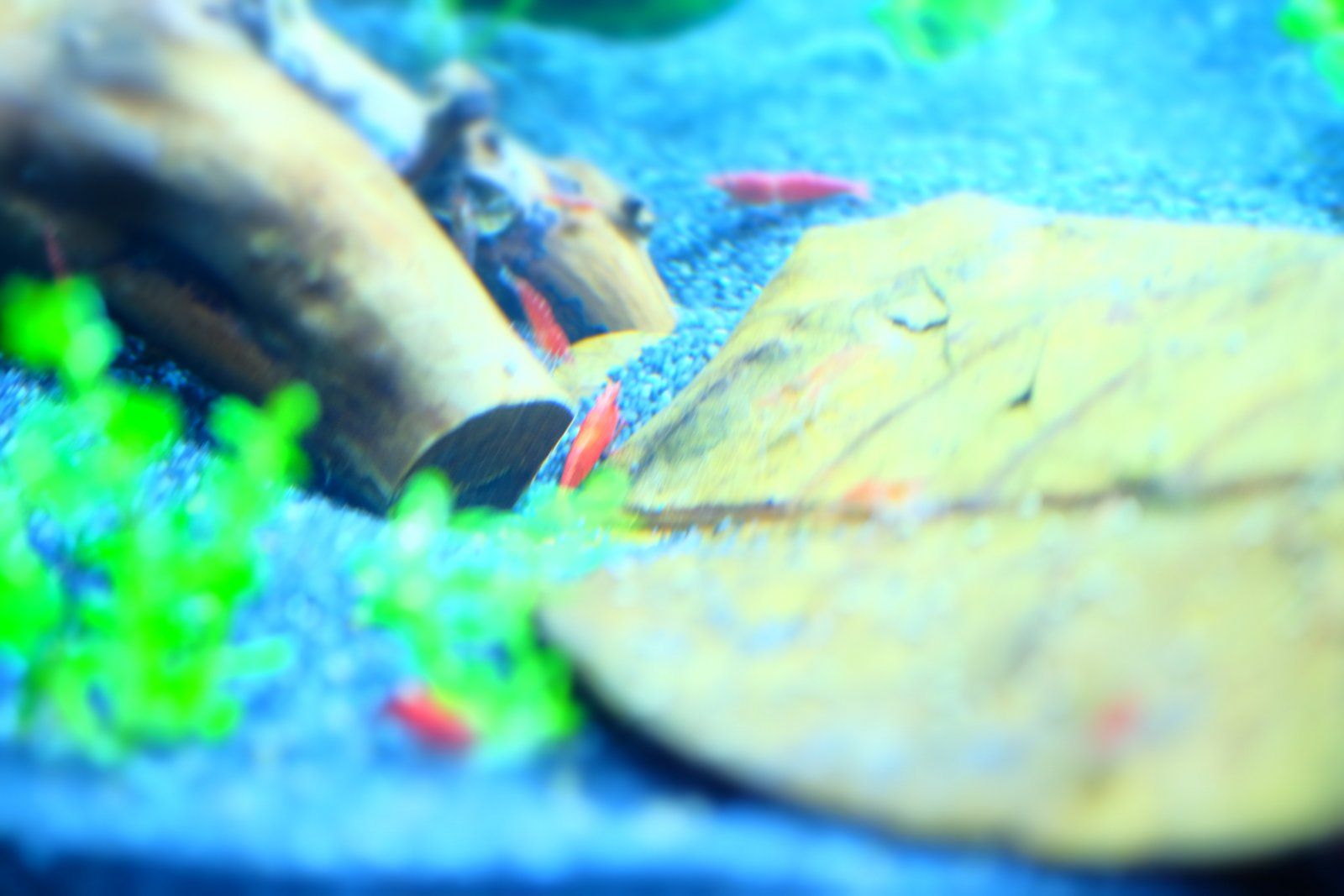 This was them settling down to dinner in the new clean tank within half an hour of being netted out of the bucket.

My syphon hose/connector is too small to syphon up adults, so I stuck with a net. But even after I was convinced I had got every single shrimp out of the old tank, I've still found and caught 6-7 tiny shrimplets that had hidden away in the old tank, so if possible, I'd leave the old tank set up for a while and move things around now and then, looking for shrimplets that have coloured up in the weeks since you moved the rest of the colony.

So I think they'd be okay even if you moved them all straight over on day one, especially if you're moving plants and decor and things with more BB and algae/biofilm for them to nibble. As long as you could do daily or twice daily water changes to keep on top of the mini cycle, they'd handle it better than you think
OP

I have caridina’s and neo’s. When I had the big blow up from poisoning in their tank months ago, my cycle was pretty much gone. My little neo’s that I had left went through huge levels of ammonia and nitrite and still went strong to the end. Such hardly little guys. My caridina’s are a bit more sensitive I have found, I think they are my main concern, especially now I just got new little ones. Taiwan’s bee mischling shrimp

Stunning little ones.
I think I will just run one of the filters in the tank and move what I can from their tank and maybe get some other stuff from my main tank for a week and go from there.

Aaahh, those caridinas are gorgeous!!

I want some, but my softer water tank is too toxic for shrimp now I'd like to get some rili's and some more blue dreams, blue velvets or blue diamonds once my main shrimp tank has settled down though. I know technically you're not meant to mix colours so they don't revert to wild type, but the tank is for my enjoyment, not breeding for profit or anything. Or maybe eventually I'll have a bunch of little shrimp tanks. Just at the moment, my plug sockets are maxed out with the three tanks as is!
OP

Even though my ninjas and mischling are both caridina’s they won’t interbreed, yet I have mixed coloured neo’s and they just all breed lol.. funny little things. When I had my original’s I had some beautiful wild mixed colour shrimp, they were beautiful. These lot, I have a lot of coloured babies so it’s a whole different journey this time round.
You must log in or register to reply here.

A moment ago
Fishmanic