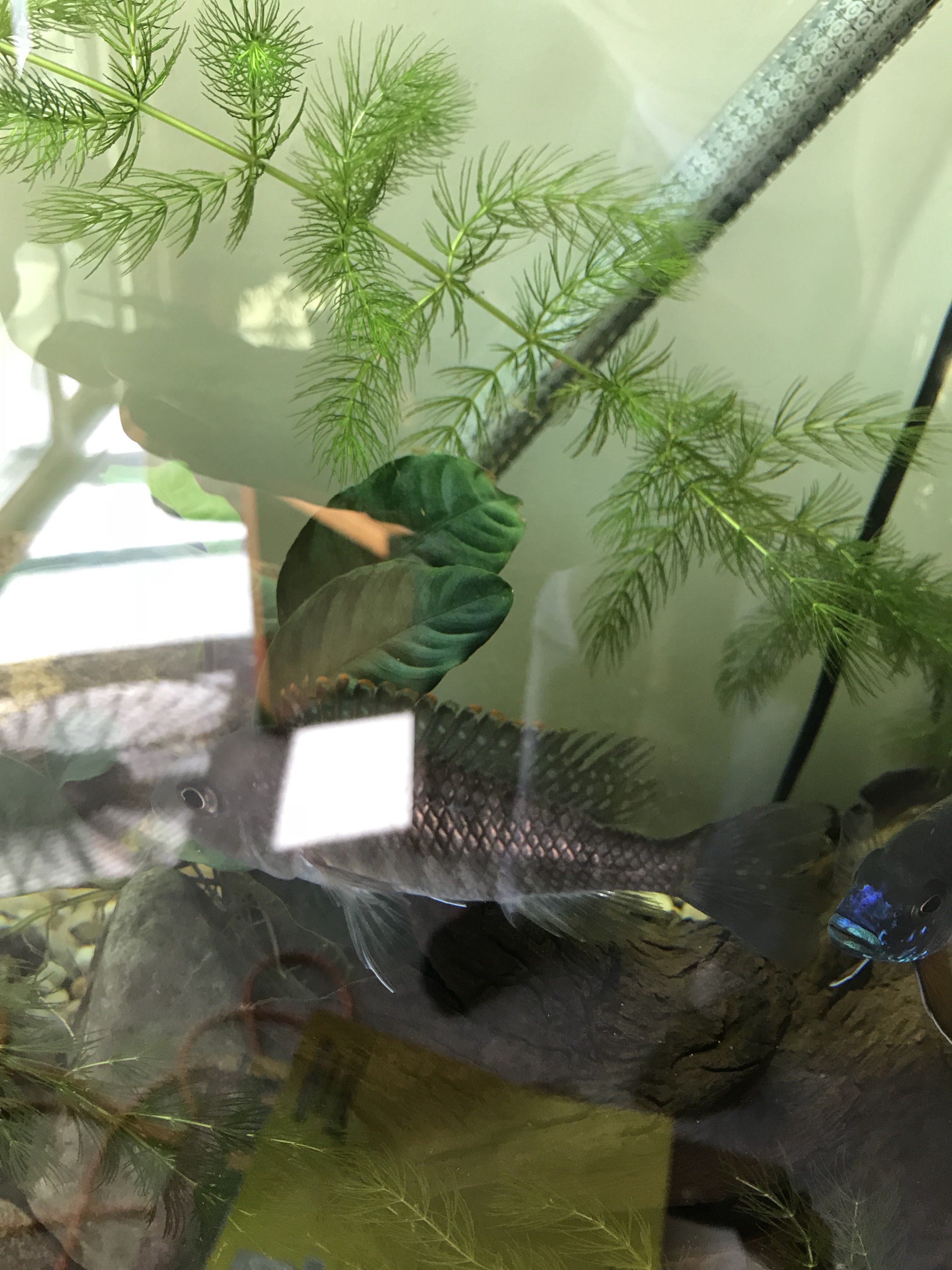 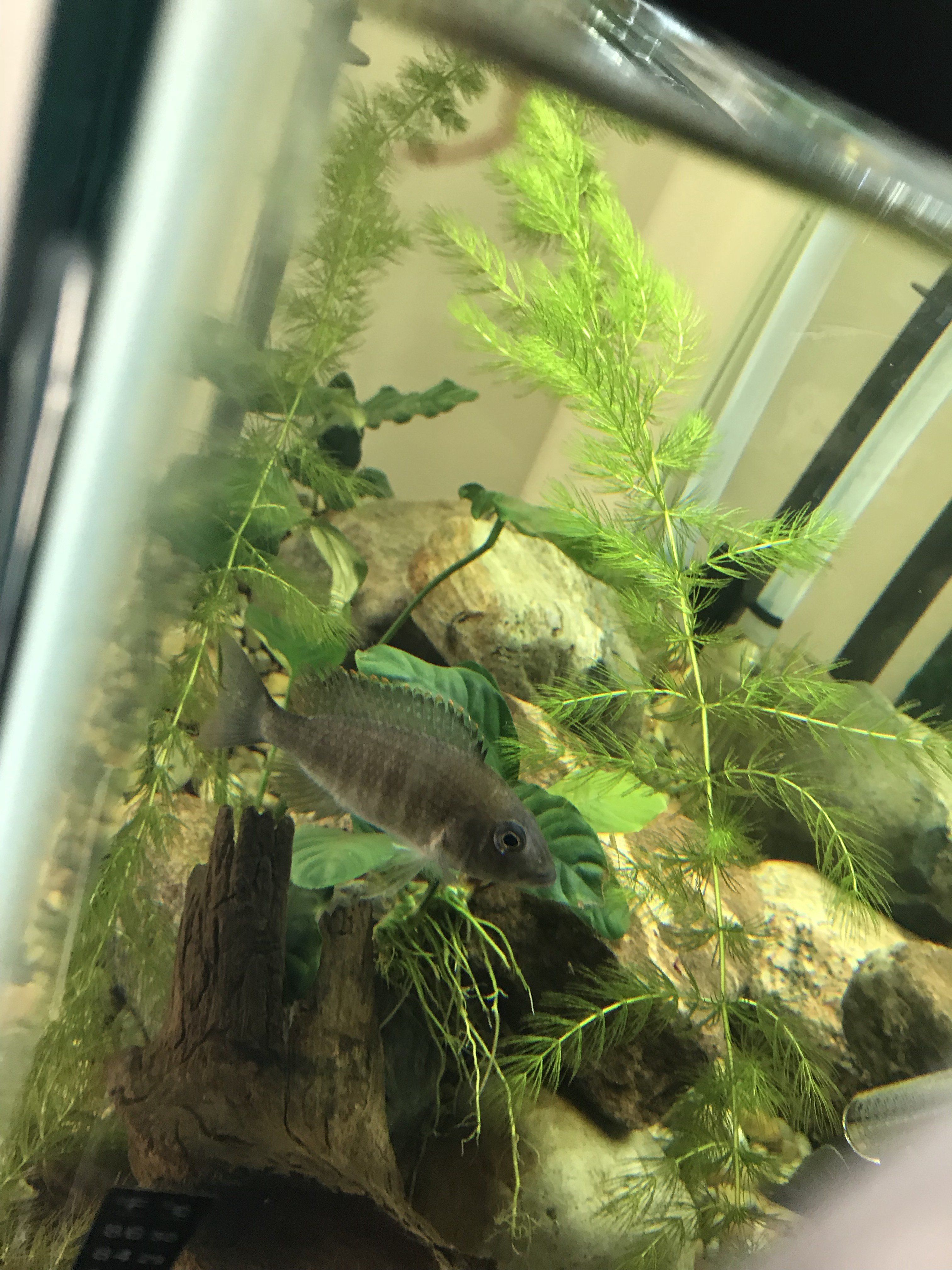 I bought a pair of african peacocks last week, and I just noticed the female's fins look like there may be something wrong! I'm freaking out a bit, as I've never had a sick fish before. I need some help please!

I looked at some threads about fin rot, and I'm afraid this may be that.

Finrot is caused by poor water quality that damages the fins and allows bacteria into the wound. The is no red in the fins and no cream or white patching so I would say the fins have been damaged by something else.

Have you tested the water quality for ammonia, nitrite, nitrate, pH & GH?
If yes, what were the results in numbers?
If no, get it tested and post the results here.

The fins might have been damaged during an argument with another fish.

Do a 75% water change and gravel clean the substrate, then monitor the fish over the next week. It should heal up without any problems as long as the water is good and the fish is healthy.
OP
G

The GH is a bit alarming. I didn't consider this before, but it's the only thing that's not within appropriate parameters... is the test off? I thought high pH meant high GH? I have some calcium-containing rocks in the tank, so I would think it should be above the 0-30 range. How can I fix this quickly, but not too fast for the fish to tolerate?

The only other fish in the tank right now are a bristle nose place and the cichlid's male mating companion (they apparently had fry together before I bought them, and the seller (a ridiculously awesome LFS) would only sell them as a pair (though they just threw the female in for "free" when I bought the male).

Thanks for the help!

Your GH and KH don't seem right. GH should be higher than KH. Perhaps retest the GH in the tank and also check the tap water.

KH and GH can push the pH up but KH normally does it.

If the water is actually soft (30ppm) then you can add a Rift Lake water conditioner to increase the hardness. It will raise your pH and KH too. But check the water again because it should be harder than that.

You can contact your water supply company and they can give you a rough idea of how hard the water is. Or take a glass full of tank water and tap water to the local pet shop and ask them to test both samples for you. Write the results down when they do it. Take your own test kits along and check the same water at the same time. If you get different results then one of the test kits is stuffed and needs replacing.

If your test kit is stuffed and you have to get a new one, get a liquid test kit and check the expiry date on it. Do not buy any test kits or medications from a warm room or that are next to a window. Heat destroys the chemicals and causes them to go off faster. Keep your test kits and medications in a cool dry place. I kept mine in a plastic container with a lid and put that in the fridge.

*NB* make sure children and animals can't get the kits because the chemicals in them are poisonous.

Rinse the phials under tap water and wash your hands with soapy water after doing tests or working in the aquarium.

If the water has any ammonia in, it will be very toxic in alkaline water (pH above 7.0). I am unsure if your test kit has 0 on it or less than 0.25 is the lowest it goes. If the tank has been set up for a few months it shouldn't have any ammonia. If it is a new tank (less than a month old) it might have ammonia.
OP
G

Okay, so I bought some crushed coral and put it in a bag inside the filter. I also added a very small amount of Flourish Equilibrium twice in these last two days. The other water parameters see checking out, so I'm going to contribute her condition to GH, or to the store/previous owner. I didn't really inspect her when I was buying, as I was really only looking at the male. GH is now reading at the low end of 50-100 (so i dosed again). I don't want to change anything to quickly. Eventually it will get there.

A few questions:
First, how do I prepare coral skeletons for the tank? My goal is to raise the GH with a combination of additives and coral, then maintain the proper level "naturally," using the smallest amount of additives possible. I bought two chunks of dead coral and need to clean it. I see that boiling is a rather bad option, as the heat can vaporize some pretty potent toxins that may be trapped inside the coral. Should I do a bleach (then dechlorinator) solution? Vinegar soak (though it will probably fizz like hell)? II doubt simply scrubbing an soaking would suffice. Every forum I look at with the "how do I clean dead coral for freshwater tanks" title starts with that question, then somebody says "Don't!" "You'll raise the pH too high!" or "Fish can cut themselves!"..... Then the thread carries on down the course of "Why not to use coral."

Second question: Roughly, how quickly I can change GH (by adding Equilibrium) without stressing the fish?

Third: Should there be any salt content in a Malawi cichlid tank? Opinions seem... well, like opinions. They vary, and there's no clear "correct" side. Does this mean that I CAN, but don't HAVE TO add salt? That's kind of what I'm thinking...

I'm sure I have more questions, but it's almost midnight and I'm dead tired. Thanks to anyone who replies (but it seems like it's just me and Colin on this one--THANKS COLIN!).

Coral skeletons, limestone, sandstone, shells & white beach sand are all made from calcium carbonate and will raise the pH to about 8.5 and slowly increase the GH. You can use any of these items but Limestone is the best thing to use in a Rift Lake cichlid tank. You can also use sandstone and it is regularly found in flat pieces so makes nice ledges or shelves in the tank.

It is a good idea to take any dirty rocks out every month or two and hose them off or scrub them down to remove algae and a film that develops on them. You don't have to remove all the rocks but if they start getting really grotty, then hose them off so the rock is exposed to the aquarium water again. Most fish will pick the algae off the rocks but sometimes they don't clean it all off and then you should hose the rock off.

-----------------------
Dead coral skeletons can simply be hosed off and put in a tank. Normally when a coral dies, it comes out of the skeleton and lifts off in a sheet before floating away. This leaves a clean white skeleton behind. All hard corals (corals with a calcium based skeleton) produce a white skeleton when they die. The only exception to this is a rare coral that has a black skeleton, but you are unlikely to see them anywhere.

If the coral skeleton is brown or green then it has probably been in an aquarium and had algae grow on it. You can hose this off and leave the skeleton in the sun for a few days and it should go white.

You can boil them but it is not necessary and it will not harm the dead skeleton. It is basically the same as boiling a rock.

If you bleach them you need to soak and rinse them each day for a week after bleaching them. It's also a good idea to double dose the water with a dechlorinator each time you change the water.

If the coral is brown and smells bad, then it should be hosed off and put out in the sun. Any dead coral animal that is still on the coral skeleton will wash off pretty easily. Most shops only sell clean coral skeletons so they shouldn't need treating.

I just hose them off and put them out in the sun for a day or two before adding them to the tank.

The coral skeleton will probably release bubbles for a few hours when it is first put in the tank. This is simply air coming out of the coral skeleton, which is full of tiny little holes/ pockets that use to house the individual coral polyps. It is normal and nothing to worry about.

After a few months in the tank, the acids produced by the fish food and waste will also dissolve some of the coral skeleton and start to smooth it off. If algae grows on the coral skeleton it will provide a protective layer that reduces the chance of fish scratching themselves on it. However, algae also stops the acids in the water from dissolving the coral skeleton.

The coral skeleton will dissolve slowly over a number of years in an aquarium. This is caused by nitric acid and other waste in the water reacting with the calcium skeleton and being neutralised by the calcium. The result of this will be the pH not dropping and probably increasing over time to a level around 8.5.

You do not have to add sodium chloride salt.

A cheaper alternative to Flourish Equilibrium would be a Rift Lake water conditioner. They have all the necessary minerals in the water in a balance level so you don't have to worry about adding some of this and some of that.
J

Looks like the fins are just alittle frayed, it's pretty normal in a malawi cichlid tank. It could get worse on having a pair though, Malawi cichlids are best kept in harems of 1m/3+ females. A single female probably won't last long.

Got some Cholla wood!