Care: It is generally considered best to keep them in water with a ph of 6.5, a KH of 2 or 3 and a GH of about 4. They can be kept successfully in alkaline water but the consensus seems to be that they do better in mildly acidic water. Many people use ADA aquasoil as a substrate to keep the water on the acidic side. A temperature of between 22C to 25 C seems best they can survive higher or lower temperatures, 22C to 24C seems to work well.

They need well-filtered water as they are very sensitive to nitrite and ammonia poisoning. Thus, these shrimp must NOT be placed into an immature tank. Most problems with the shrimp are caused by water quality. Weekly water changes of up to a third of the water work well for me. They can do okay in small tanks of five gallons but ten gallons is better as it is easier to keep stable water conditions. The baby shrimp are only two millimeters long so just about any fish can eat them. With lots of cover some can survive with very small fish.

Diet: I use shrimp pellets, crab food, spirulina and vegetables especially spinach. There are many more expensive specialty shrimp foods available. I crush some of the shrimp pellets and scatter them in the tank to feed smaller shrimp that cannot compete with the adults. There are also commercial baby shrimp foods available. The addition of leaf litter is also a good food source for the shrimp. Oak, beach, cherry and Indian almond leaf all work well. The tannins in the leaf may also be of benefit. The shrimp eat the micro life living on the decaying leaf.

The shrimp are graded for ‘quality’ with C being the lowest grade, then B and A and then S, SS, and SSS. Up to the present the more white the shrimp has the higher the grade. There is a great difference in the prices of grades. Perhaps higher grades like SS and SSS are even more fragile as they have been inbred to produce the traits the breeders found desirable.

Breeding: Crystal Reds are not the easiest shrimp to keep and breed. They are generally more difficult than other dwarf shrimp. This may be related to the small gene pool they come form.

Mod Note: Some reports state that breeding of this species is not difficult. Sexing of the female is best done when the shrimp is older. Females have a curved underbelly and, in general, are larger than the male. Apparently the coloration of this species is related to a genetic mutation which is an autosomal recessive. This species is closely related to Amano shrimp.

First pic is a CRS grade SS second one a C grade CRS. 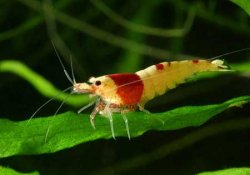 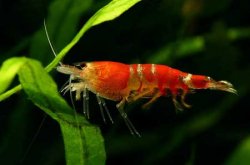 An example of an S grade. 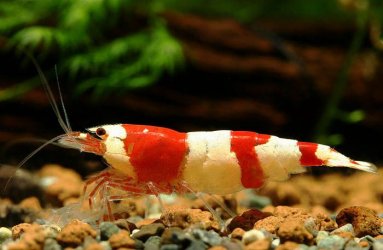