Hello!
I just bought these lovely corals about a week ago, unfortunately I did not get to write down what they were figuring I could just research and find out myself what these babies are. The green one I believe is a Zoathius, and may or may not be a radioactive dragon eye, the orange one might be a leptoseris? I'm not 100% on my research, so some other opinions and eyes would be great! Thanks in advance! 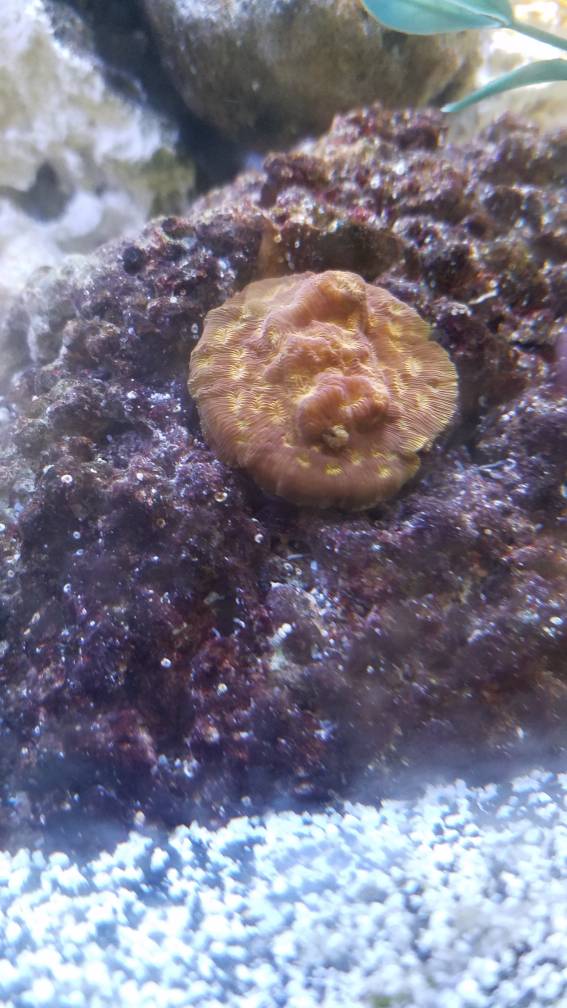 The bottom one is definitely a Zoanthid. The top one is a type I'm not familiar with but from pictures it seems reasonable (I can't recall having seen any in person in shops to make a better comparison). Hopefully someone else who has kept those can chime in.

Encrusting species can be tricky to ID accurately due to the range of morphological variation they exhibit in different environments. I've got an "it's green and encrusting" right now that I've not gotten a satisfactory ID on for ages.
OP

Thank you, anything helps really. I've read Zoanthids are poisonous to touch, no one warned us at petco (I know they get a bad rep, but the one near me takes really good care of their fish and actually know information about the stuff they sell)
Is this true?

Zoanthids and Palythoa species (a zoa relative) can both carry a chemical called palytoxin to varying degrees, but they're not really poisonous to the touch. The toxin is an issue when:
1. They are cut, damaged, or really stressed to make them slime or squirt at you and...
2. You somehow get the toxin in your blood (like from a cut), ingest it, or get it on a mucous membrane (eye/nose/mouth)

Accidentally ingesting the coral's slime or secretions is the main way I've heard of people getting sick from palytoxin. So, don't sick your hands in the tank and then make a sandwich without a good wash with soap first. I've never heard of any instances of it being absorbed through the skin from simply picking up the coral. If you want to be 100% safe, use gloves. Never, EVER frag one of those without gloves and face protection - fragging requires a lot more caution than just poking around in your tank. It's a good idea to use that anyway on other corals that can also squirt you.

For my own tanks, the reality is that I am often sloppy with gloves for regular maintenance because I forget them and just dive a hand in. I have one of the more potent types of palys and have touched a lot with no ill effect - not because it's a good idea, but just because I'm thoughtless about it and go "oh darn shouldn't have done that" afterwards. However, I never put a hand with cuts into the tank and I ALWAYS wash my hands after they've been in contact with aquarium stuff. I also try to remember gloves, I just often forget - but I've never gotten sick from it with my marine tanks since I'm rigorous about washing up.

On a side note, there are plenty of other things that can make you sick from aquariums though, not just zoa/paly toxins. I learned that the hard way many years ago (long before I kept marine) from getting some water from a freshwater tank splashed in my eye and not flushing it out immediately. Had a horrible painful eye infection that took a couple weeks to go away and give me full sight back. Good hygiene and keeping anything tank related away from your face is very important with any aquarium and will keep you safe with regular maintenance with zoas/palys.
OP

Thank you! This was all so very helpful, I also do not use gloves, and haven't had a problem yet (knock on wood) unless I have my hands in the water for long periods of time, like rearranging, then my arms sometimes break out.

The worst park job EVER!

I
Is my tank cycled? Fish flake method with mature sponges