Care: Moderate, prefer soft acidic water but are more tolerant of higher pH and hardness than most Apistogramma. Do not like toxins or pollutants in the water, including medications and nitrates/phosphates etc. Although they may act aggressively towards other fish, they usually do not do damage. Does best with two or more females per male, with each female having at least one cave. The male will defend a 'super territory' around the smaller female territories.

Feeding: Frozen foods such as brine shrimp and bloodworm are readily accepted, may need a lot of persuasion to accept flakes and pellets.

Sexing: Highly dimorphic, males are much larger and more colourful than females, and also have very long extensions to the dorsal fin. Females are pale to high yellow depending on breeding condition and stay quite small.

Breeding: Quite easy to spawn for this genus, soft acidic water will increase chance of succesful hatching. Female will lay 50-100 eggs in a cave or structure that can be defended, male will guard territory. Eggs hatch after 4-5 days of constant care and fanning by the female, after a further two days the fry should be ready to accept newly hatched brine shrimp. Both parents may care for the young although the female may drive the male away violently. If this happens, seperate the male. The female leads the fry through the tank foraging for food and protects them for up to four weeks.

Comments: Many colour variants are available, double and triple reds and orange sunburst are quite common. Most are tank bred and wild fish can be rare. 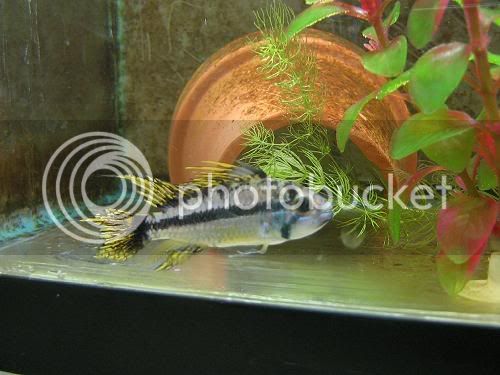 Here's my boy Just to show a wider range of coloration.

this is my A. cacatuoides when i first got him;

and this is him now;