I have had my Betta for about 3 months now. I started him in a 1 gallon tank without any filtration system but I've then (about October 1st, so 1 month after being in the first one) moved it up to a 2 gallon tank for the past 2 months and that is when I began to notice the tips of his fins curling. In the past months his fins have been slowly turning completely blue, but before they were almost 70% white. I also noticed the white spots are a bit pink also. He has never been aggressive and I've never seen him flare up. I use water conditioner when changing the water and his roommate is a gold mystery snail that I got at the same time as I got the second tank. He was more active in the first smaller tank than now so I'm a bit worried I am doing something wrong I'm trying my best but I don't have any experience prior to him. I don't keep him in direct sunlight and I feed him 5-7 pellets a day. He's never bothered the snail. They seem to just ignore each other. & I've always used tap water and water conditioner. Oh and I forgot to mention that i am not sure if I should try aquarium salt because of my snail. And the tank I have now has "under gravel filtration" to provide oxygen and keep the water circulated. His tank is also always kept at about 78-80 degrees Fahrenheit.

My betta turned from white to blue in less than three months! A lot of bettas change color, so that part may not be a worry. I'll let the others answer the questions you have though

do you have a before and after pic?
OP
T

This is the before. It's was taken in his old tank

I'll attach the after below because the file size is too big
Here is the after. 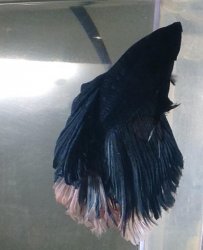 He looks perfectly fine to me. I have an identical type of betta and he lost all of his white and pink. His head is actually all blue now. No white or pink anywhere. 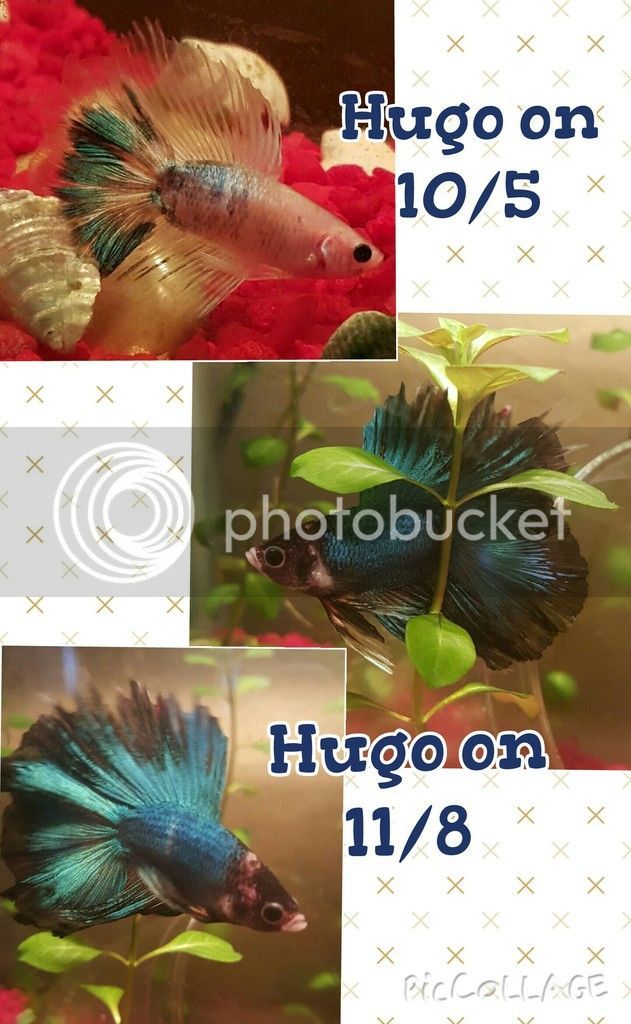 I think he looks better now, I love his rich dark blue colour

His color is because of him being a marble (butterfly is a marble).   Marbles change color sometimes very dramatically and occasionally very quickly.  As for his fins curling, that seems to be because he is a rose tail.  Rose tail bettas have large often exaggerated fins which become really heavy.  They curl because of all the extra rays in the fins which make them curl and overlay themselves.   The large fins often make it harder on the fish to swim since the fins are so heavy so that might help explain why he is a little less active now than he used to be.

On another note,  how often do you do water changes and how much water are you changing at a time?  A mystery snail really needs a tank of around 5 gallons since they are such messy critters so you might be needing to do more water changes to keep ammonia down.  Keep an eye on the current produced by the filter since bettas do not normally do well with a lot of current.  And since he has such heavy fins, he probably really can't handle much current.  If your tank has a decent amount of current, then that is another reason he might not be as active as before.
F

He's beautiful!  Before and after

My betta turned from a white to blue in a few weeks when I first got him. I think your betta is fine.
You must log in or register to reply here.

A
How pregnant is my Molly?!?

A
Fungus or growth?