Quick Question from the community:

I've got a pair of Rams (gorgeous Golden Ram and a blue ram) and the female's ovipositor tube has been descending, ascending, and descending for the past 2 weeks (she is also very plump and . I have not seen the males parts descend at all.

Any clue why they seem to be so indecisive? I've been feeding them blood worms (freeze dried, gut loaded), spirulina flakes and omega one color flakes.

Any chance of a picture of the female and the male?
OP

Sure. I'll have to post it later; working at the moment.
OP

I'm working from home and took a 1 minute break to grab these poor quality pictures - I've had the Gold Male for about 4 months and the Blue female for about 1 month. 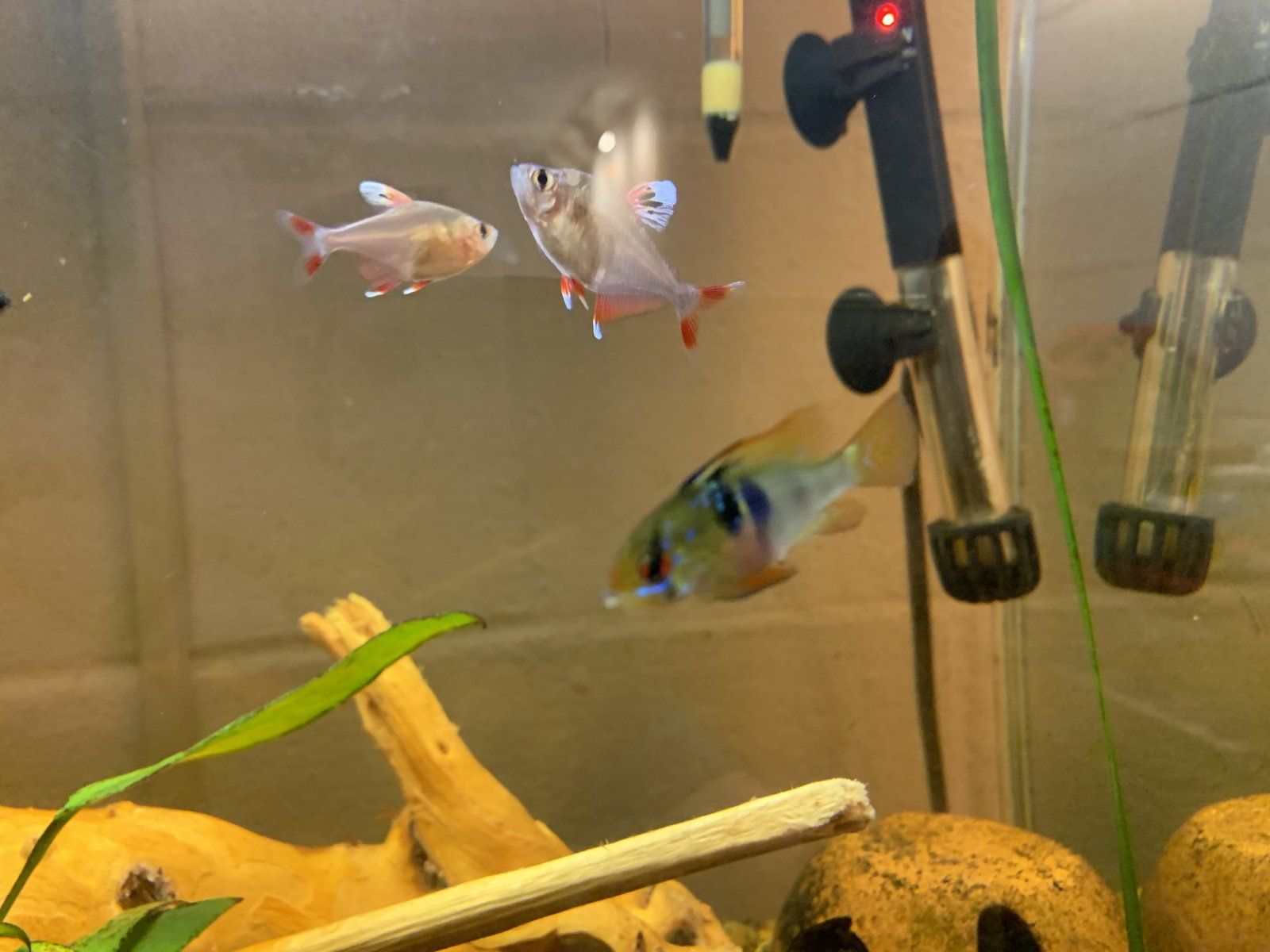 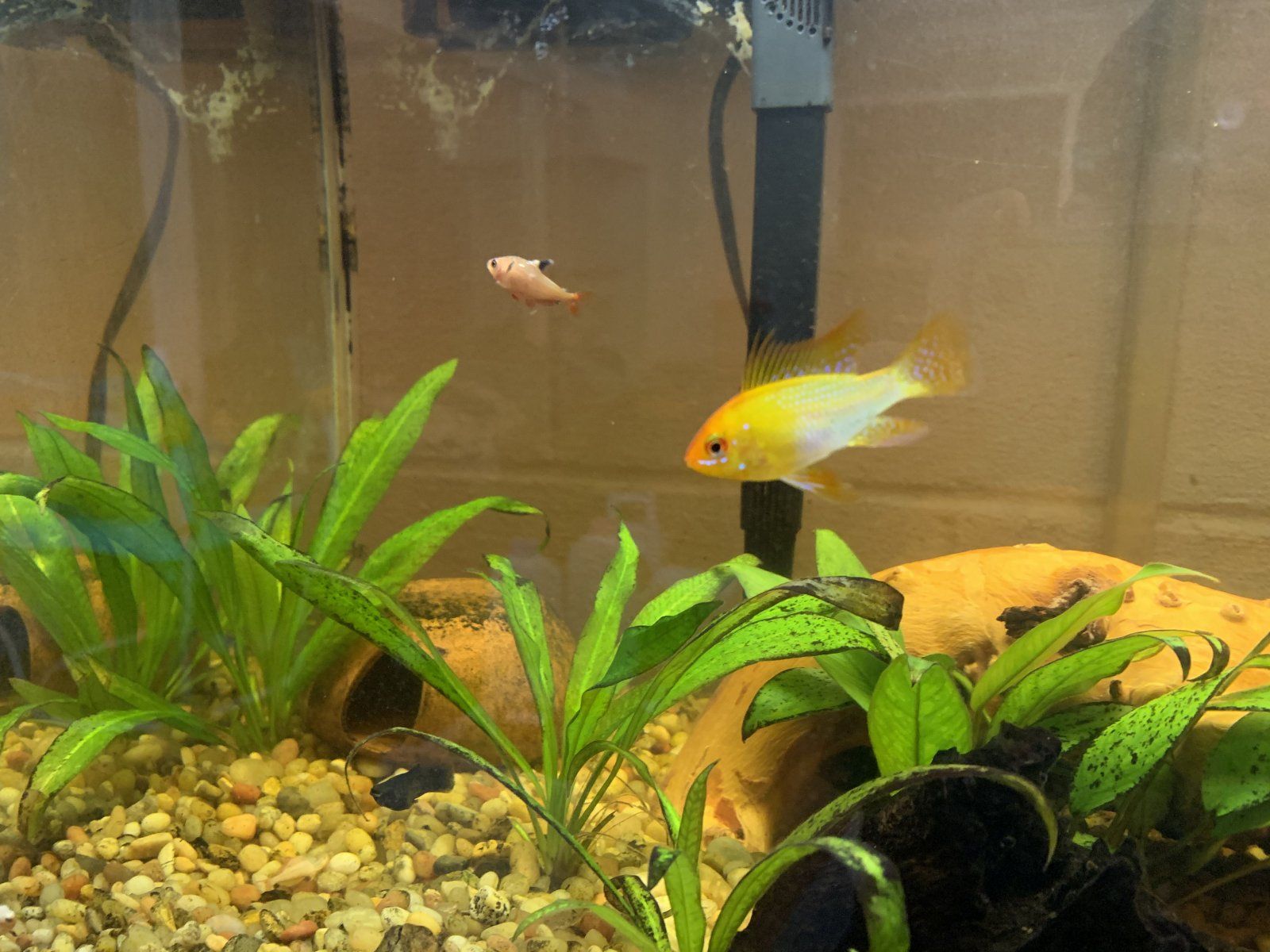 The male could be young.
He might not feel secure. A picture on the back of the tank would help with that bit.

You need some floating plants to make it a bit darker so they feel more secure. Having more plant in general would help. Try some taller plants like Ambulia, Hygrophila polysperma, or narrow Vallis along the back. And Water Sprite for the top.

Feed them on live or frozen foods 3 times a day. Use frozen brineshrimp, bloodworms, daphnia and prawn/ shrimp or marine mix. Cut it up with a pair of scissors so it's small enough for them to eat.

Do a 75% water change and gravel clean the substrate every day for a couple of weeks or while you are feeding more.

Have the temperature around 26-28C.

Your rosy tetras might like some more company too but wait until after the rams have bred.
Last edited: Apr 2, 2020

I agree the Male ram looks really young. Give it some time and let him mature more.

I do not presume to dispute with @Colin_T but I once read that wild Rams come from very bright open and shallow water. Mimicking those conditions gave me success in breeding Rams. Also, very soft water and a higher temperature of 82 degrees. I'm no Ram expert but that's what worked for me on three occasions.
OP

Thanks for the feedback, guys! He had a prior mate that they did lay eggs (never successfully had a batch). She died for callamanus worms (attempted to deworm unsuccessfully - have since treated with Copper to kill all larvae). I'll continue to feed a high protein/fat diet and we shall see how it plays out. I will do more frequent WC as well.

kribensis12 said:
Thanks for the feedback, guys! He had a prior mate that they did lay eggs (never successfully had a batch). She died for callamanus worms (attempted to deworm unsuccessfully - have since treated with Copper to kill all larvae). I'll continue to feed a high protein/fat diet and we shall see how it plays out. I will do more frequent WC as well.
Click to expand...

Sounds good to me!

I agree on some of what has been posted, with a couple other points.

The interaction of the two fish on a regular basis is usually a better guide as to what if anything may occur with regard to spawning. This species must select their mates; any male/female put together may or may not spawn, but if they do not bond they will not last long together if they do spawn. As you already have the two fish together, you may as well leave things and see what develops.

Temperature...this species must be maintained at warmer temperatures regularly. A minimum of 80F (27C) but preferable a degree or two higher. If they are not, they will not be in good health regardless. The Rosy Tetra will find this at the high end of their range; no idea if other species are present, they may have serious issues with temperature..

Food...do not feed frozen bloodworms more than once a week. I have had both species of Mikrogeophagus spawn readily on a diet of good quality prepared (dried) foods and frozen treats (daphnia is excellent; but bloodworms only once a week and not freeeze dried).
OP

I have since upped the temp to 80 degrees (prior, 79). I would bump it to 82, but I am concerned about the tank mates. Everything I have read would tell me that anything above 80 would not be beneficial for my bristle nose, my mollies, or my danios. Technically danios are a cold water fish, but in the summer the streams get very warm (80-82 degrees). I had never considered temperature much with danios in the past - but I don't think it's fair to ask them to withstand anything above 80.

I'll cut back on the Bloodworms - I have heard such conflicting information on how often and when; live v. freeze dried etc. A good friend of mine (long ago Moderator, Tolak) use to breed angelfish and he told me when it was spawning time he'd use fresh bloodworms daily. I've had other people recommend beef heart (which to me seems very unnatural and not good for the fish). I opted for freeze dried for convenience and that the blood worms are gut loaded with additional vitamins and minerals.

Today was the most promising day yet - the female and male's tubes were out on full display but later began to disappear. It's possible they laid eggs and ate them - it's hard to say.

If you do get eggs make sure to post pics
OP

Will do! They've been eyeing the underside of some Mopani wood, so not sure if it'll be possible!
OP

We have eggs but alas, they do not appear fertile. The males priapium was never visible, but they get along really well. The priapium has been visible previously, but I've never seen eggs.

They get along very well with each other, so hopefully I see some fertile eggs soon!

Any thoughts on the size of my Male? It was previously mentioned that he looked too young - but to my knowledge Rams don't really get much larger? I can add more females to the tank to see if a better pair forms, but I don't want to find out that these two are actually lovebirds and have them attack intruders (so to speak).

What makes you think those eggs are not fertile? They look OK in the photo, but that may not be true. It takes 2-3 days for the eggs to hatch. Also, new pairs often fail the first few attempts, especially with tank raised fish.
You must log in or register to reply here.
Share:
Facebook Reddit Pinterest Tumblr WhatsApp Email Share Link